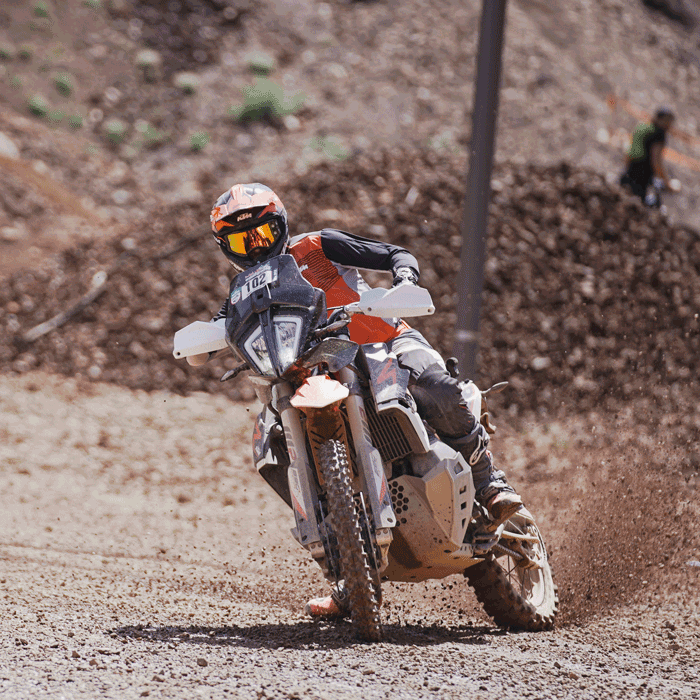 GOING LARGE UP THE IRON GIANT

Throwing a KTM 890 ADVENTURE R around the Red Bull Erzbergrodeo Prologue? Surely not! Greg Gordinne made it happen and here’s the story…

Fair play to the Belgian. Greg Gordinne was enticed to sample the famous hard enduro in Eisenerz this summer after KTM had supplied the former Trials rider and offroad adventurer/coach with a KTM 890 ADVENTURE R to blast through some key events (the twin cylinder class) on the re-blossoming international race calendar.

They don’t come much more daunting than the Erzbergrodeo and a technical challenge of speed and daring that was first launched in 1995 and has seen some of the top names in Enduro – Sala, Salminen, Despres, Knight, Blazusiak, Walker, Jarvis and Lettenbichler – work their way up the mountain.

KTM knew Gordinne faced an intimidating task, so invited him to bring the KTM 890 ADVENTURE R to the factory for an overhaul that would help his assault of the Prologue stage. “KTM gave me the KTM 890 ADVENTURE R this year and it was a great opportunity to get a brand-new bike and to be able to tell them all about it through tough and extreme circumstances,” Gordinne says in a well-made and revealing 20-minute video charting his Erzbergrodeo baptism. “When KTM asked me if I wanted to take the bike into the Erzberg Prologue, of course my answer was 100% yes! We first travelled from Belgium to Mattighofen where the KTM 890 ADVENTURE R was given new tires, wheels, skid plate and WP Pro Components. Our mechanic gave me some nice advice and things I never knew before: amazing!”

Gordinne was able to immerse himself in the KTM ‘factory’ experience. He was supplied with various pieces of kit from the KTM PowerWear folder and was able to tour the KTM Motohall once the KTM 890 ADVENTURE R had been prepped. “It is amazing to see how a passion can go through your veins,” the humble and likeable rider said as he walked through the KTM Motohall complex.

Gordinne’s skill shines through when he stopped at a motocross track on the way to Eisenerz to test the new WP Pro components. Watching him take flight on the KTM 890 ADVENTURE R across the numerous jumps showed just how the motorcycle can cope with gnarly offroad demands.

Given #102 for the meeting that usually sees a field of more than 1500 competitors whittled down to a third of that total, Gordinne continued his ‘works’ treatment by being able to park the KTM 890 ADVENTURE R in the Red Bull KTM awning next to names like Mani, Russell and Hart. “The craziest thing; I’m here between all these legends,” he says, almost open-mouthed.

His crew submerge themselves in the camaraderie, the festival atmosphere and the weather! The first-time sensations evident in the video work. Gordinne tries the Rocket Ride climb but it’s the two days (two heats) of the Iron Road Prologue that really count. ”I’m a bit stressed,” he admits at one point “but I will do my best to stay safe”. GG ploughs up the hill and then is able to restock and benefit from a full service before try #2. “I really feel like a kid at Christmas,” he grins as he is able to learn even more about the KTM 890 ADVENTURE R; “I need to trust the bike a bit more”.

Despite the sun, heat, dust and slipperiness Gordinne makes the peak. ”It was just perfect, so much fun and such a cool opportunity” he claims. But did #102 break it into the top three and claim a trophy? Watch and find out right here: