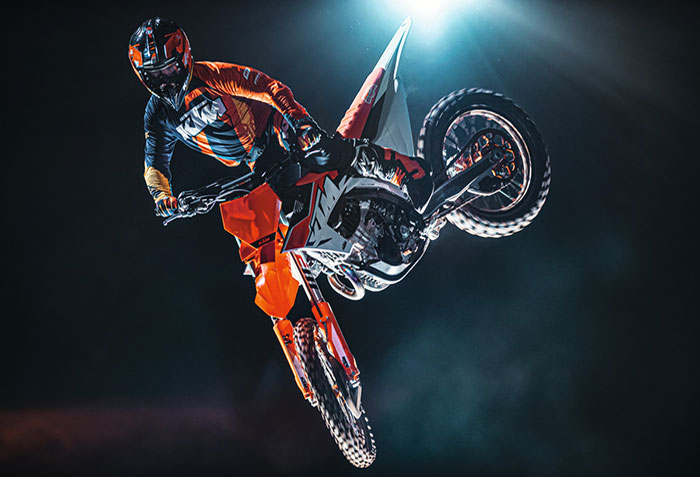 More than three years of thought, engineering and fabrication have gone into the brand new 12-bike 2023 KTM SX line-up and KTM’s game-changing motocrossers broke through the gate for the first time on May 10th. Here are five essential things you should know about the fresh generation…

KTM’s launch message for the 2023 platform was pretty clear: the concept and the bikes themselves were very new but the search for excellence and offroad riding perfection was a time-honored approach. Slogans like ‘Nothing’s Changed’ hinted at this paradox.

Cutting through the hyperbole and the promises, how will the latest editions of the KTM SXs for juniors and both four-stroke and two-strokes lovers prove that a new benchmark has been found?

KTM has moved on from the chassis that served the brand so well and for a multitude of MX2/250 and MXGP/450 titles at the highest levels of dirtbike racing since 2015 (the time of the last significant KTM SX update) and embraced a brand new ‘anti squat’ concept. The rear end of the KTM SXs are now noticeable leaner. The new steel frame brings increased longitudinal rigidity; the feeling on the bike is more dynamic and even more agile but more stable and more reassuring no matter the terrain or the conditions. To achieve this, KTM has carefully re-sculpted the chassis with a new aluminum and polymer subframe (weighing just 1.8kg), hollow diecast swing arm, engine mounts and an altered engine position two degrees further backwards in terms of positioning. The frame wall thickness has been optimized to achieve improved specific stiffness in high stress areas such as the steering head and the shock mounts.

The theory – a product of lessons from all the racing success in the last decade – has already proven to be strong. The KTM 250 SX-F has won three Grands Prix at the time of writing and Red Bull KTM’s Tom Vialle is situated right at the top of the MX2 world championship standings. In the demanding world of AMA Supercross the KTM 450 SX-F obtained victory and almost half a dozen podiums during the 2022 campaign.

KTM SX and SX-Fs benefit from lighter and more compact motors as well as even more durable components. The low-friction packages still offer the best power-to-weight ratio on the market. New cylinder heads, a fresh sensor on the new PANKL Racing Systems gearboxes permits a ‘quickshifter’ function from 2nd gear upwards on the four-strokes, a new Keihin engine management system (EMS) takes care of launch control and traction control through the selectable maps. A rollover sensor is an additional safety element that kills the engine in the case of extreme crashes. The hour meter lets the rider know what’s going on thanks to the integrated FI status LED and fuel level indicator.

All of these details complement re-designed throttle assemblies for even smoother and snappier response. The engines breath through a new exhaust pipe that counts on two-part header sections to be as compact as possible. Clever construction means the joint position can be accessed and maintained without removing the rear shock. New mounting points and screw lengths point towards the principle idea that the 2023 KTM SXs are more condensed, less heavy and each section of the bike ‘clicks’ together to create that nimble but powerful riding sensation.

KTM has improved the contact points of the 2023 bodywork for better manipulation of the KTM SXs when jumping, scrubbing or simply manhandling through the toughest conditions. Extra control comes via the flat seat profile.

Feeling good means you can search for lap-times longer and the redesigned 7.2-liter fuel tank will outlast the will of the strongest riders. What else? KTM has fashioned new front mudguard ‘fins’ that help to disperse track soil and the 2023 frame design incorporates bigger but lighter footrests that also offer more ground clearance due to the integrated mounting concept. It might sound like a small detail but the crucial pivot point for the rider’s feet really adds to feeling of the 2023 KTM SXs. Speaking of feeling, there are new CNC-machined triple clamps with the mounts boasting increased grip surface (so less handlebar ‘twist’) and rubber dampers combat vibration.

Where do we start? KTM SXs rely on the excellence of Brembo for the hydraulic clutch and the braking system but another vital partner is WP Suspension and the whole frame ideology of the 2023 line would not work without the latest generation of the tactile WP XACT front forks and shock. There is plenty to read about when it comes to the new suspension but the highlights are the hydrostops for more bottoming resistance and redesigned fork rings as well as tool-free adjusters for both the front and rear. The shock, in particular, is smaller and is optimized in practically every aspect to slot perfectly into the new linkage and augment the chassis philosophy.

Don’t forget the new graphics. The colors go in tandem with KTM’s ‘change, but no change’ ethos as the ‘purple haze’ harks back to the KTM look of the 1990s. Items like the black powder coated frame might be an aesthetic but the material also plays a role in increased resistance to the elements.

KTM still loves its two-strokes and the innovative FI TPI tech that was launched as part of the EXC enduro models several years ago gets overhauled and becomes far advanced to form ‘EFI’ on the KTM SXs. A new double injector set-up (one low-load and one top-feed) harnesses performance and a new TPS sensor means an efficient ‘cold start’ mechanism like the 4-strokes. Better behavior and control when idle, better fuel-air intake and boosted response, power and less cut-outs or hesitations rightfully positions the 2023 KTM SXs as the best 2-strokes to have ever screamed out of the factory doors. Less carbs really does mean more muscle!

A little bonus point to consider: a very special guest – multi Supercross champion Ryan Dungey – will be explaining more facets of the 2023 KTM SX range as well as some of the finer, championship-winning, points of motocross. Keep an eye on the Blog page for more updates!