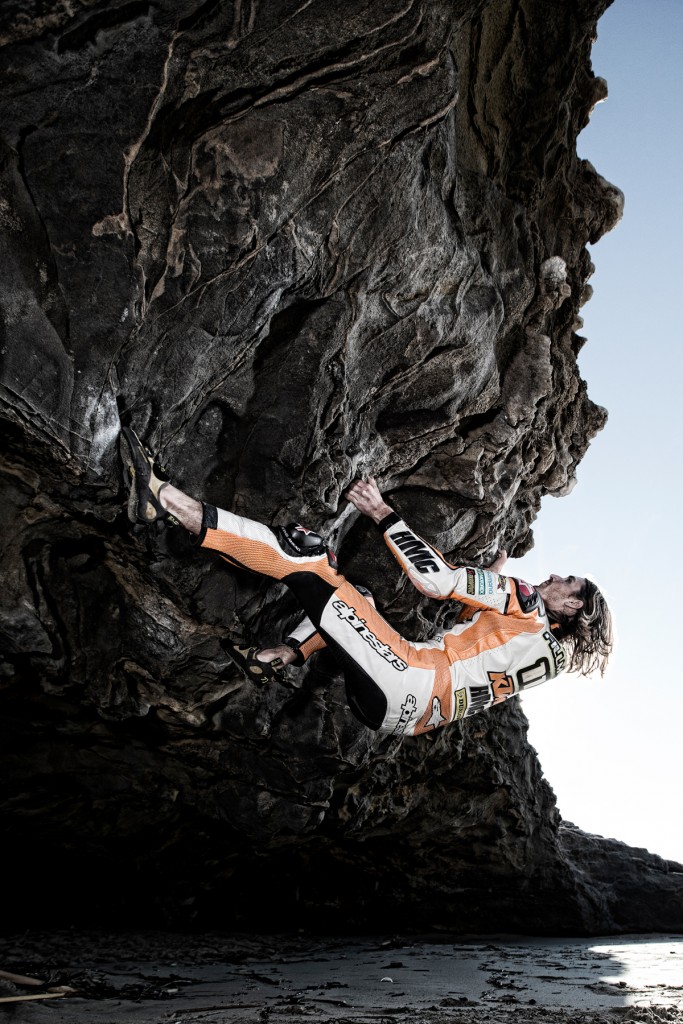 AMA Superbike racer Chris Fillmore comes across as an unflappable kind of guy. Today we’re doing our best to rustle the cool veneer of the 28 year old. Something of a popular name in the motorcycle racing community (he can be found motocrossing with MotoGP stars, mountain-biking with AMA Supercross Champions or teaching people like Ryan Villopoto to surf) Chris is a little uncomfortable about being asked to dangle upside down from a rock on Newport beach … as a gaggle of watching high school kids wonder what on earth is happening. Fillmore nails the poses for photographer Ray Archer and over the course of a day getting to know the RC8 pilot it is hard to imagine the Michigan-born athlete being unable to take anything in his stride. 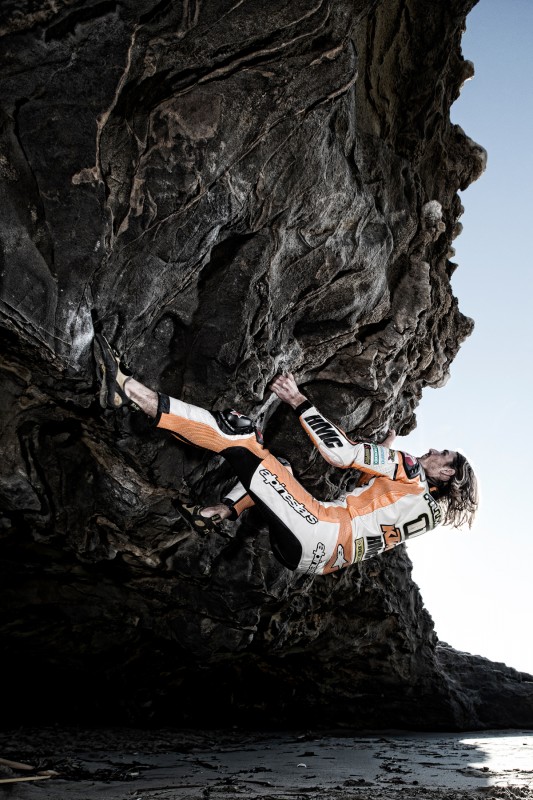 Fillmore has become known to the motorcycle racing community not only as KTM’s steadfast developer of the RC8 superbike in the turbulent AMA competition but also through video series schemes like ‘Following Fillmore’ (two years and two season on with the rider an articulate and capable persona in front of the camera) and those professional model ‘looks’ which means he is a photographed face for the likes of Alpinestars. On the track and over the course of four seasons he has helped hone the RC8’s fierce idiosyncrasies – with the help of the HMC team – to become a podium challenger in American Superbike. 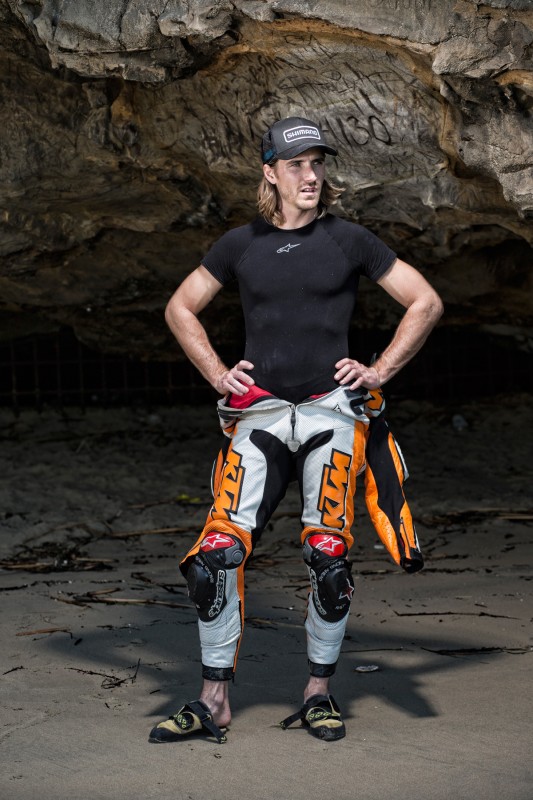 With KTM excitingly heading into MotoGP in the next two years Fillmore’s work, position and credence within the factory could have extra relevance. Who else has better knowledge of the limits of the company’s big bore tarmac racing efforts?

However it would be hasty to suggest that he is at a crossroads. HMC still have a job to do with the RC8 even though it would appear its days are numbered if the MotoGP project leads into a new sport ‘Beast’ to sit alongside the splendid KTM 1290 SUPER DUKE R in their street collection. There is also the subject of AMA Superbike itself; a series that appears to be pulling itself out of the quicksand thanks to the rope created by the Wayne Rainey-fronted MotoAmerica. Fillmore – along with the likes of stunt rider Aaron Colton – have become ambassadors for KTM on the asphalt. The motocross and supercross spheres helped KTM North America post a unit volume increase of 30% in the first six months of 2014 but the division in Murrieta, California is also barrelling ahead with the Street market and the positive responses to the DUKE and ADVENTURE. 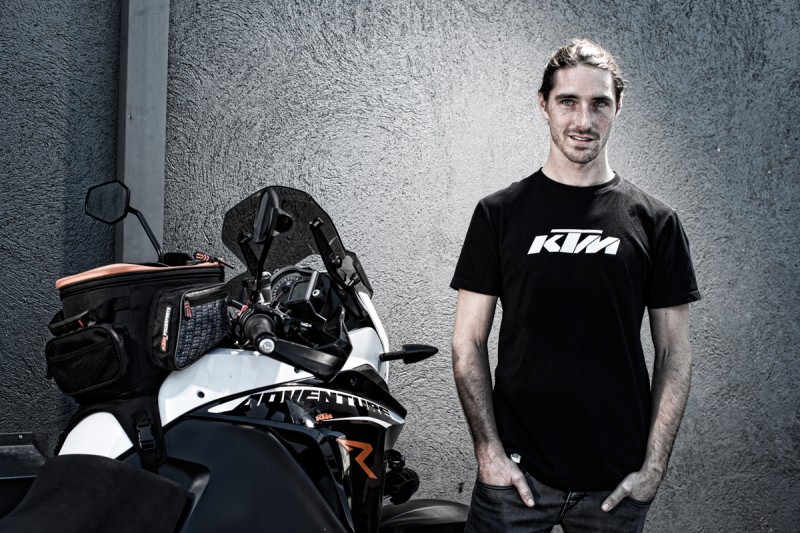 We chat firstly in the noisy coffee shop confines of Deus Ex Machina on Venice Boulevard and mainly about Fillmore’s adventure at Barber Motorsports Park with a café racer-inspired 690 DUKE created by revered designer Michael Woolaway. ‘11’ is humble, helpful, open and a pleasure to talk with. He then starts up his 1190 ADVENTURE R and with girlfriend Jacqueline on the back tackles the bridges crossing the Venice canals like he is asked to tie a shoelace. We then meet again at his shared apartment in Newport Beach where we dissect the demise of AMA Superbike (“As soon as I got in I pulled my Dad aside and said “this kinda feels like [the end] of Supermoto”. It was eerie. Everybody was bad-mouthing in the pits.”) and the chances of ever breaking onto the international scene (“Honestly, I don’t know how to get there …”). 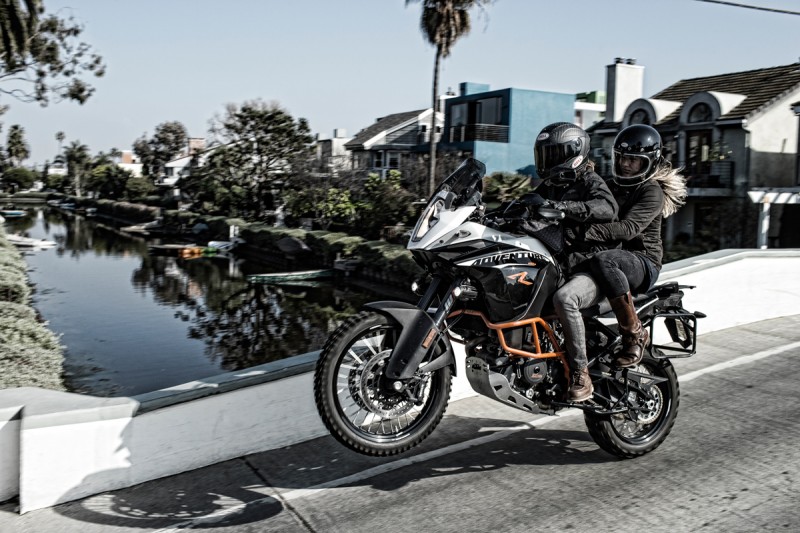 Chris Fillmore and KTM. Bring us up to date. How did you end up road racing for the Austrians?
“I ended my Supermoto career in 2008. Kurt Nicoll (former KTM Sport Director) had a race department in the U.S. and he was going to give me a two year contract, so in the first year I would be a developing road racer and then to go into AMA Superbike. That idea got canned when the economy took a dive. I was thinking ‘what do I do?’ Supermoto was dying, so do I try road racing or go back to school and do something else. I decided that I liked racing motorcycles too much and the lifestyle that goes with it. I did it on my own for two years and jumped into the deep end and got my AMA Pro licence. When I got an opportunity to throw my leg over the RC8 in 2011 I’d never ridden a Superbike in my life before. I took a few laps to get up to speed on a track I’d never been to and the guys were like “how is it?” and I said “I don’t really know!” We had a race the next weekend at Ohio and I said I felt comfortable but I had no idea if we had real pace. I’d never ridden something with that power or with electronics. I had just come off an XJ1200 where I had won that championship and hopped on the RC8. It was a bit ‘all over my head’ but the progression we made over the years has been really cool. I’ve had the chance to learn a lot and completely develop a motorcycle and what we started with in 2011 is way more sophisticated now and more advanced. It has kinda been an honour for KTM to stand behind me. They had no idea how the whole programme could be, and with me onboard … it could have been a ‘wash’ but it has turned out to be a great career and opportunity with KTM.”

Were you initially sceptical? Could an offroad firm make a good superbike?
“I didn’t really think of it like that. I had a chance to ride one in 2008 at Mid-Ohio for what might have been a dealer day or the RC8 induction – I cannot really remember – but I got to do a few laps on it. I had ridden the SUPER DUKE that same year but when I got on the RC8 … I was kinda terrified of it! But I had faith in the motorcycle and knew it had stood out in Europe already. I did not know at what level it would be or what could be put into a Superbike programme (by KTM) but that wasn’t so much in the back of my mind compared to how scared I was by it. In my first (AMA Superbike) race I was lining up against guys that I idolised like Ben Bostrom, Josh Hayes, the Hayden brothers and to be there with KTM and to be competitive was a great feeling.”

Did the KTM Superbike programme raise eyebrows?
“I think there were, for sure. I never really talked to people about it and didn’t specifically ask for opinions … I also didn’t look for any other rides because I actively wanted to be a part of KTM and they were hell-bent on taking it forward. I just wanted to show them what I could do.” The RC8 obviously developed over the seasons. You’ve ridden Japanese machinery so did it keep its character?
“It has definitely kept its distinct character right from the beginning. When you are so wrapped up in something it can be hard to step back and see the big picture and the overall progress but I did that in 2014. When we started out we were happy with top tens; that was our goal. It has been a slow but steady progression to the point where every single race is a top five reach and knocking on the door of that podium. We’ve had a few in the bag but some unfortunate circumstances had gotten in the way like running out of gas on the last corner and crashing out of a sure-fire third place at the last race of the year. I’ve had compliments of people coming up to me and saying: “your programme has come a long way”. You know I don’t see it that way because I expect to be close to the front and winning … but others see the story as a turn from mid-pack fillers to establishment as a top five team and maybe podium contenders.”

And you’ve kept on the track … even through some very hard days for AMA Superbike?
“I think I have played my cards right. It is no secret that American road racing has been in a bad spot in the past couple of years. It used to be one of the biggest series in the world but now it seems like people don’t hear about it much. To have KTM behind me during these years means I’m happy to be there and I feel like we are weathering the storm, getting through and doing a good job. Being paid to ride a motorcycle is a hell of an accomplishment in AMA road racing right now. I don’t know if I can be in a better spot.”

So what about going international? KTM have obviously mastered Moto3, they have the 390 Cup series and now MotoGP is coming up. Could you have some input there?
“I’m definitely pushing for it. I like to go overseas, travel and see new things. I’m all about new challenges but I don’t know if there is a ‘want’ for Europeans to bring an American over at the moment, or at least nobody has expressed that to me. My guys have helped me get to some Supermoto races in Europe. As far as the road racing goes then I would really hope that somebody would like to see me over there, and I can help out because we’ve been working here for five years with the team. I can bring knowledge of the bike and experience from what we’ve found.”

You seem like a guy who doesn’t sit still for five minutes; whether you’re mountain biking, rock climbing or off-roading … it appears you have a pretty good lifestyle?
“I do! I really did not think of it like that until my girlfriend moved in recently and she said “do you ever stop?!” She says I am always making plans, whether to go biking, surfing, climbing or even to dinner. I think it is one of the perks of the job. Our race schedule isn’t super-demanding. If it was like GP with eighteen rounds then it would take a little bit more focus but I am normally a very active person and like to stay fit. Instead of being regimented and in the gym at 8am I do my activities. I ride motocross three times a week. I kinda do it all; I guess I am like an enthusiast and that’s another reason why I chose this career.” 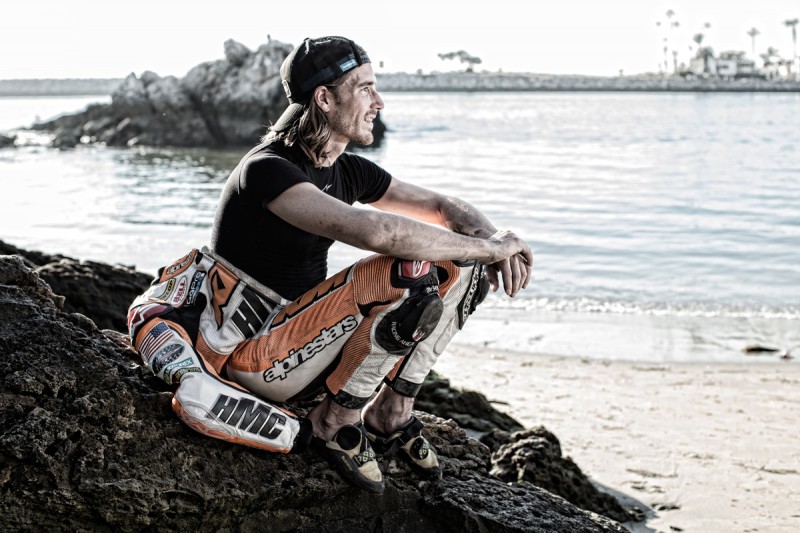 193 Responses to Hanging with Chris Fillmore