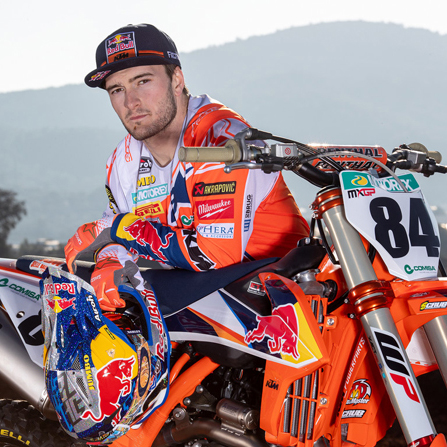 How do you set a new bar for performance and preparation in a sport? We asked MXGP star Jeffrey Herlings to tell us a little of how he makes the difference in Grand Prix.

There is almost a fanatical, obsessive compulsion for training and conditioning by those attempting to reach the top of the sport of motocross. The notion that ‘he/she that works the hardest will triumph’ has held true for decades but there are very few who would dispute the fact that the current crop of Grand Prix riders stretch fresh frontiers of physicality, speed and technique across longer-than-ever MXGP calendars. 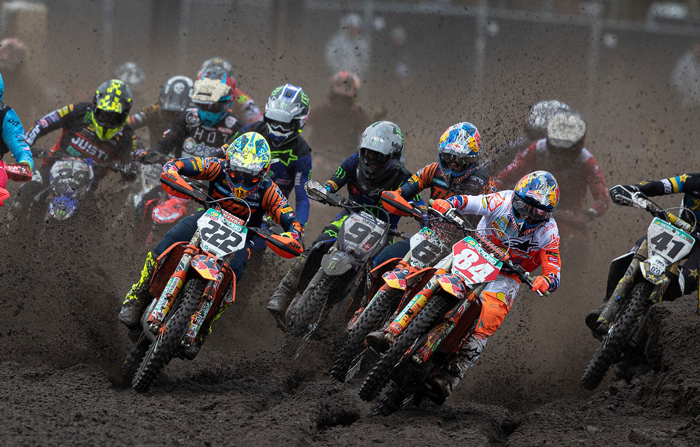 MXGP of The Netherlands – Round 02 2020 – Valkenswaard, Netherlands. PC @RayArcher

One of the chief architects towards a new sphere of performance in the last few years has been 25-year-old Red Bull KTM stalwart Jeffrey Herlings. Through a combination of the Dutchman’s unflinching attacking riding style, unmatchable lap-times, aggression and lack of weakness, the requisites for success have pushed higher and further away from mere mortals in the premier class of the FIM Motocross World Championship.

Herlings achieved this effect and crushed the competition in the twenty-round 2018 season where he won 17 from the 19 rounds he contested (and finished as runner-up in the other two events) for one of the most devastatingly brilliant campaigns in living memory. The scale of his superiority gave MXGP a gloomy sense of inevitability that summer.

For 2020 Herlings is adopting a moderate approach because in 2019 he tasted the other side of the motocross spectrum. Two injuries limited his track time and reducing his profile to that of an absent reigning champion. His governance seemed like a distant memory. “The worst year of my life,” he says now.

MXGP is furiously unpredictable and cruel but the influence of Herlings’ landmark 2018 is still felt. “I went all-out,” he recalls. “If 100% was the maximum [then] I did 110. I watched every single piece of food I ate, I calculated sleep and jet lag, I trained my ass-off, I left my social life on the side for almost a year. It was tough. It is hard to do that even for just for a few years, physically and mentally. It was worth it though to come onto this level. It was almost a picture-perfect year…” 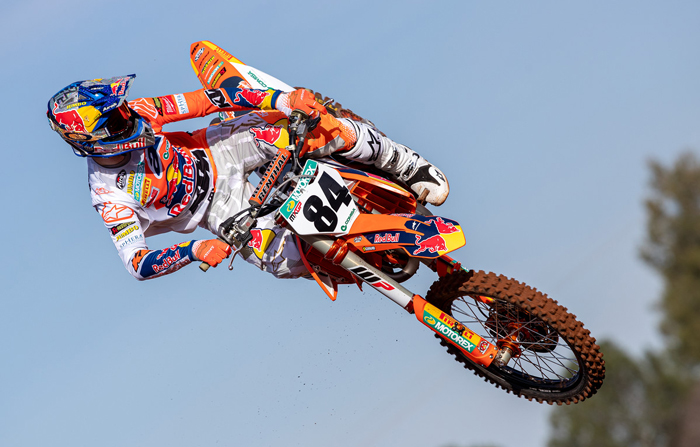 The four-time world champ and current series leader after owning the opening two rounds of 2020 – prior to the calendar ‘shutdown’ – is notoriously guarded when it comes to the details of his training regime. Peers and other riders have commented on their amazement at the workload and commitment to his profession but Herlings rarely shares social media material or revelations about his methods. So, waving an orange flag here on the Blog, we managed to squeeze slightly more information out of the #84 on his weekly program of prep in the chase for new Grand Prix standards. 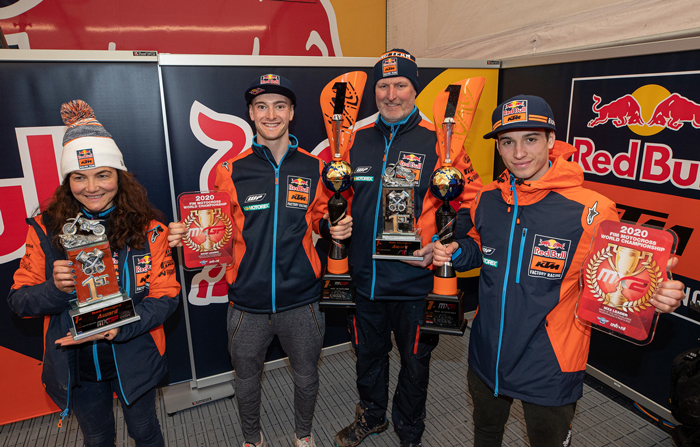 On Monday after a Grand Prix I’m always on the bicycle…
Depending on where I have come from and what time I arrive home then that will determine when I’m out. I will cycle even after a tough race like Lommel. It will be a recovery outing, like one-hour-and-a-half, just to move the legs and get me ready for Tuesday. I’m always on the road and usually it’s summertime when the season has started so from March to October I’ll usually be out. When it’s December and -3 outside on the thermometer then I’ll be inside! I love cycling. Holland is really good for it. We don’t have many up-and-down hills but there are dedicated lanes and lots of variation. It’s good to way train and keep the average heart rate up.

Jeffrey Herlings on one of his recovery bicycle rides.

So, on Tuesday I’m riding my bike…
Normally some sprints and at least one training session as well: it could be more cycling or some rowing. I try to ride my KTM in the morning, especially in the summer, and do the training in the afternoon. I have five-six tracks I usually go to because I can ride there whenever I want. Some places open later in the afternoon in the summer and I don’t like to wait that long. I prefer to arrive and ride from 9-12, go home and get some lunch and do some more cycling, mountain bike or rowing or swimming after. 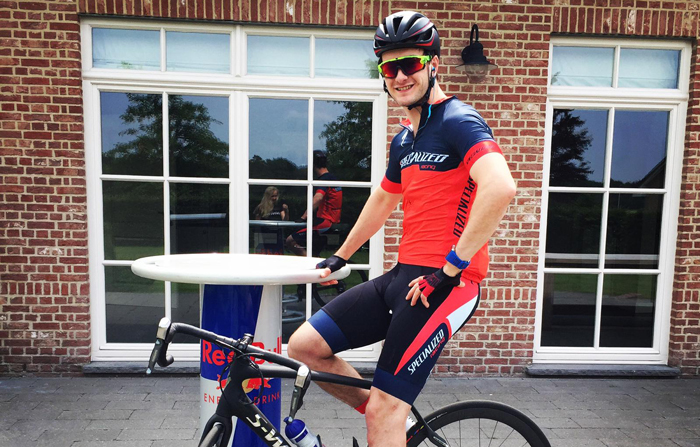 Wednesday is…
Pretty much the same…but instead of sprints on the bike I’ll be doing motos. That means running race-length track sessions.

Thursday isn’t a riding day but…
I’ll be in the gym, and then cycling again. I use the bicycle a lot because I cannot run! My foot doesn’t have that flexibility anymore; when I start to run, I compensate with my hips and back which leads to other pains! I can do many other things – swimming, cross-training, rowing – but running is difficult. 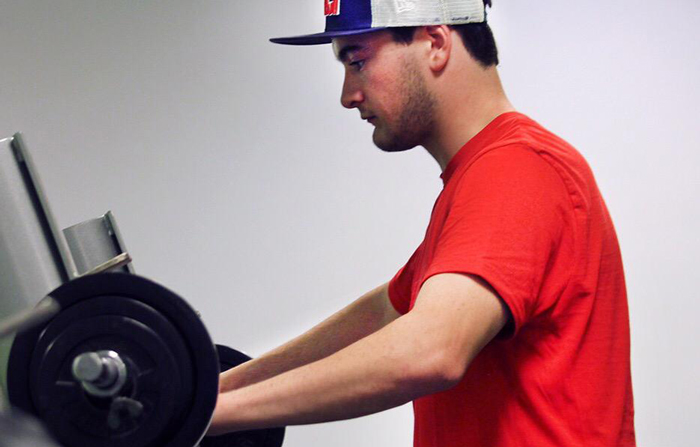 Jeffrey Herlings working out in the gym to bring variety into training.

Friday is almost a free day but…
When I can then I’ll do more rowing, cycling or cross-training in the morning before travelling to a race. I might only do something like 9-10 in the morning – and it won’t be crazy, just for blood flow, like on Mondays – so the rest of the day is pretty easy.

What about downtime?
I don’t have a set day for that. I like to hang out with friends. I like being home when I can. In pre-season this year I spent a lot of time in Spain, so I didn’t see much of them or my family. With age you start changing and you start to enjoy different things in life. 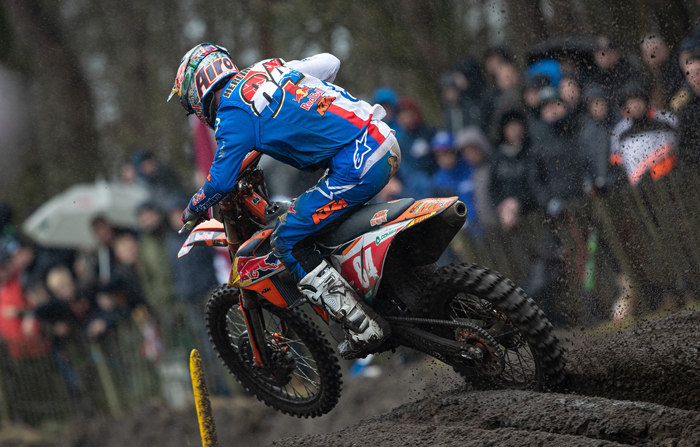 Right now…it’s frustrating!
Obviously, we started 2020 in good shape with wins in England and Holland but everything has now been put on hold because of the travel and the rearrangement of the calendar. We were in the South of France getting ready for Argentina and when we returned home everything ‘exploded’, with tracks closing down and borders closing. It seems our season has just been extended by two months, and honestly, you wouldn’t want to end up in a hospital with a broken collarbone right now. We will be racing until November and that means a full year of training.

Is there a reward?
I love ice cream, and spareribs! I always have weight goals, where I say: “I want to be this-weight-or-that-weight at that time” and if I am a bit under that goal then I’ll reward myself with an ice-cream.

One Response to A HERLINGS MXGP TRAINING WEEK