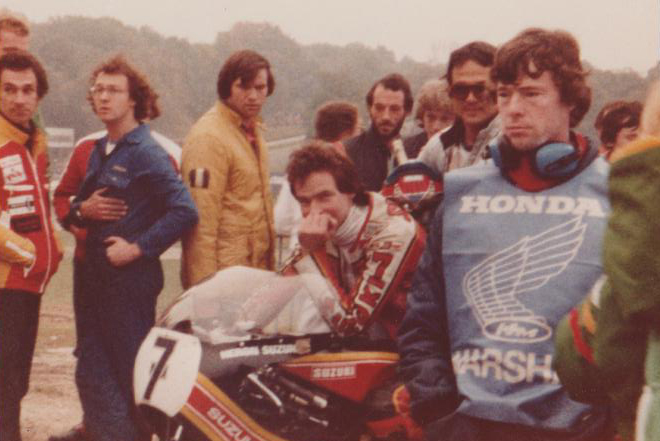 Have more words been written about any other motorcycle racer? I know I have at least four books on my shelf and back in the 1980s I even owned a ‘Barry Sheene Annual’ that contained professional racing tips from the man himself (oh, to still have that publication).

Sheene (1950-2003) is, at the time of writing, still the UK’s last FIM Grand Prix road racing world champion thanks to the second of his two crowns back in 1977 (although Moto3 athlete Danny Kent could end that thirty-eight year drought in Malaysia). The Bultaco-Suzuki-Yamaha riding Londoner ruled the world for the first time in the summer I was born – 1976 – and through a childhood eagerly spent following a father through a passion for motorcycle racing ‘7’ was the hero, the figurehead and the ultimate star of the period. He was the focal point of an activity through my adolescence up until his retirement in 1984 and from when I had to find new ‘heroes’ like Ron Haslam, Wayne Gardner and even Carl Fogarty before adulthood fully took hold.

Almost thirteen years after his early death from cancer Sheene has long become immortalised for defining the traits of motorsport in a bygone era. All the clichés have been applied: playboy, entrepreneur, devil-may-care, fast-living, fast-loving. Sheene became an icon of a time when the world was much bigger, more distant, more mysterious and far less connected. He seemed to fill the definition of ‘real fame’ (a star name that would cross demographic groups) whether it was for the photoshoots, endorsements, model girlfriends, Donald Duck, ‘7s’, broadcasting, socialising, crashes, injuries and of course his sporting achievements.

In the same way that a kid now can turn on the television in anticipation of watching Lionel Messi or Cristiano Ronaldo play football I can remember driving to Brands Hatch with my Dad excited and curious that Sheene would also be within the same circuit. Of course my good luck was that stars like Barry were far more accessible that anyone at a similar level would be nowadays. Perhaps the only parallel you can draw both in terms of status, celebrity and character is ‘46’ (see, I don’t even have to write his name) but such was the Italian’s first in-depth dealings with fame and across the periphery of the internet and social media age that I doubt he coveted the spotlight half as much as Sheene.

We used to be able to see and enjoy Barry racing (and optimistically queue for an signature or photo) thanks to his commitments in British Championships and things like the Transatlantic Trophy (a British road racing version of the Ryder Cup). I’ve been told that somewhere there is a photo of myself with only a few years on the clock posing with him (I could never find it). There are also vague memories of being at a sweltering Spa Francorchamps in the early eighties and somehow getting into the paddock where we were able to peer around the work awning with those distinctive ‘7’ livered blue and white Suzukis. Looking back now he was a guy who looked and was regarded as a superstar but would think nothing of waving back to a little kid and for who autographs never appeared to be too much of a chore (perhaps it was but I’ve never heard of anyone being rebuked). 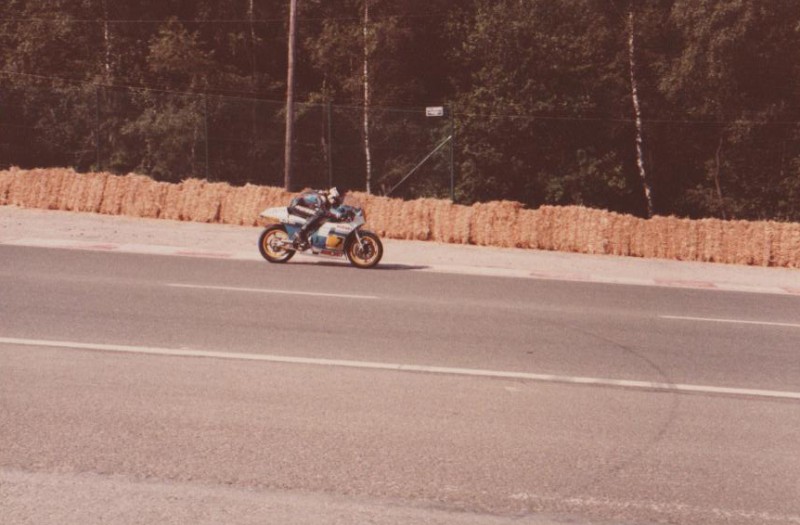 Sheene was obviously a master at making himself stand out. If it wasn’t through his skill as a racer and a riding style that easily identifiable (slightly upright, toes on the pegs and leg widely extended) then to a kid it was the name, the accent, the jokes, the slight rockstar appearance and jovial persona when being interviewed over the circuit PA. He was someone you noticed, someone who won, someone that you saw – and who saw you – and that ultimately you ended up rooting for. All these things mattered to a small boy who was trying to work out where he should place his emotional connection to a dangerous but thrilling sport.

The periods of adversity like the Daytona 200 crash in 1975, Yamaha politics with machinery, the Silverstone practice fireball in ’82 (when he was looking good for a third 500cc title) and his devalued position by Suzuki coming back from two subsequent smashed knees just seemed to reinforce that underdog image even if he was the biggest name on the road racing block.

By all accounts Sheene was by no means a saint and there are stories of manipulation, ego and behaviour characteristic of the age and that swirl of values and sociocultural change through the 60s, 70s and 80s. But this is stuff you find out later, and there is nothing that really tarnishes the admiration you felt in the first place. I still remember his demo lap at the Donington Park British Grand Prix – 1988 or 89 – in a pair of jeans and a borrowed lid riding Kevin Schwantz’s Pepsi Suzuki; it was one of the biggest cheers of the day. He then returned over a decade later to race a Manx Norton in a classic race and I was happy to say I saw that triumphant swansong.

Around our house were magazines, books like Motocourse and VHS tapes like ‘Barry Sheene’s Six of the Best’ where the man himself would sit discussing his finest appearances with veteran commentator Murray Walker and merrily smoking away. Then who could forget the utterly forgettable feature film ‘Space Riders’ in which real racing footage was interweaved in some ludicrous fictional plot of two opposing racing teams with Barry as the leading man. The action images and soundtrack were the only good things about it. I still remember Sheene sitting on the sofa of breakfast daytime TV sheepishly promoting it.

With hindsight Barry (one 50cc GP wins, three 125ccs, nineteen 500cc, twelve national championship titles and an MBE) made a mark because he elevated a niche sport. Trying to explain to somebody that you liked motorcycle racing became understandable for non-riders or non-converts as soon as you mentioned his name. A combination of factors created his mythical status and he was a ‘hero’ to different people to different reasons. For me he was a damn good racer and someone we loved to cheer for. I had a t-shirt that replicated his leathers and have memories of drawing ‘7’ bikes. Even now I reckon some Sheene-themed merchandise or clothing would go down well.