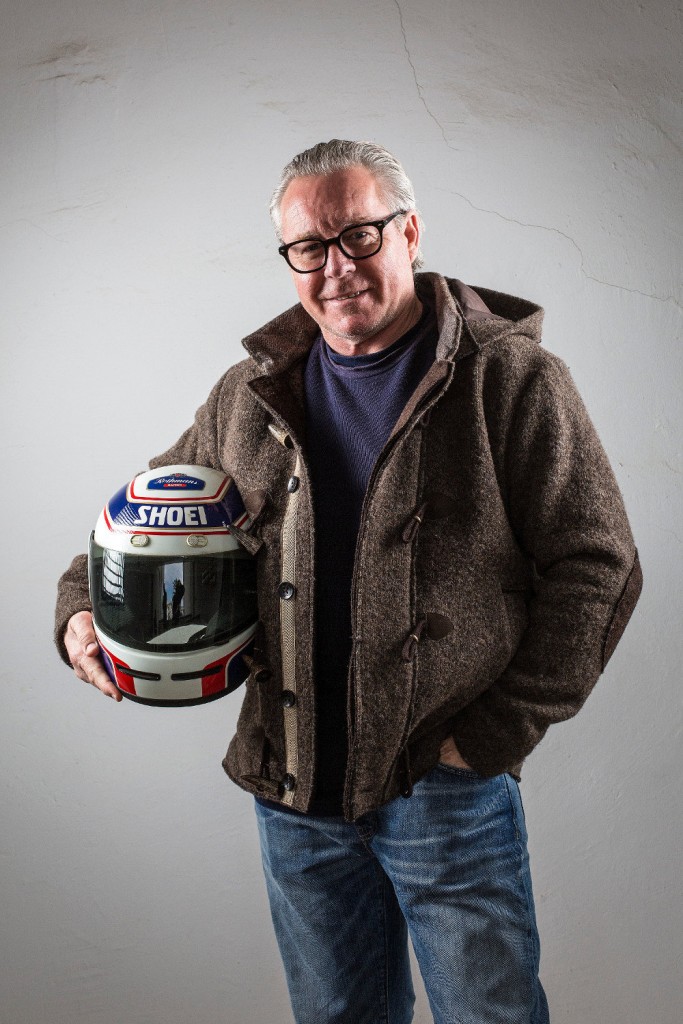 Heroes: how do we create them? How do we turn individuals into ‘icons’, ‘legends’ or even ‘idols’? Clearly as children we are all impressionable. People can have a profound impact on others whether they are making a speech, singing into a microphone or excelling at some activity that seems impossible. There is also empathy. The idea that the one person is friendly, understandable or relatable, and some form of connection is established. 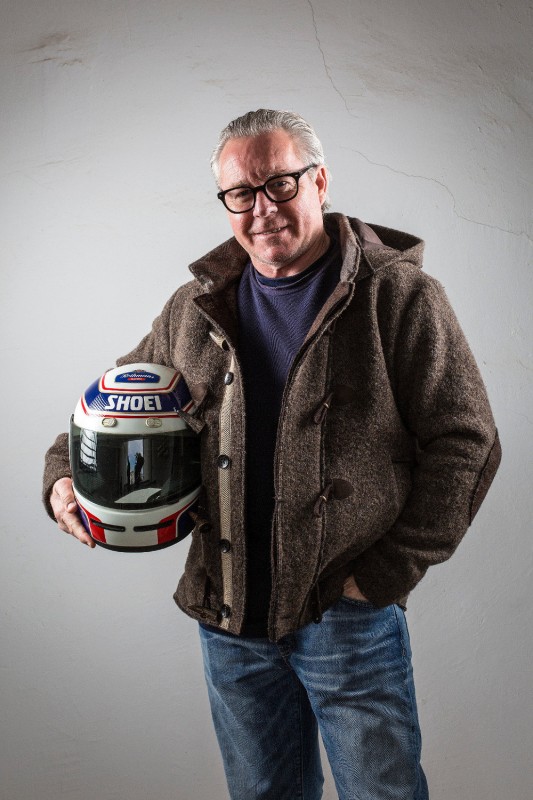 As a kid growing up and attending British road racing on a frequent basis the enthusiastic twang of an Australian accent coming through the circuit PA system was something of a surprise. Wayne Gardner may have been born in the industry town of Wollongong in October of 1959 but was making his first impressions on British shores at the age of 21 and the initial throes of a career-long link with Honda on UK short circuits. To a seven-eight year old sitting on the grassy banks at Brands Hatch it sounded like Gardner had, well, come from the other side of the world. Jokey, light-hearted and undoubtedly fast and uncompromising on the asphalt; I’m sure I wasn’t the only one that wondered ‘who is that?’

Gardner’s choice to make his way as a professional racer through British Superbike, into Honda Britain and eventually to a factory Grand Prix ride from 1985 to 1992 turned out to be shrewd. His initial step into 500cc GP racing suffered a heavy blow due to a sickening impact with incumbent world champion Franco Uncini at the 1983 Dutch TT that hospitalized the Italian and caused the Australian to go through a period of soul-searching. Uncini recovered and Gardner persevered and he became synonymous with that glorious 2-stroke era of the premier class of Grand Prix. Decked in distinctive blue and white Rothmans livery from his first full season in 1985 until his retirement eight years later he was prominent in a cast whose names roll off the tongue with ease: Lawson, Rainey, Schwantz, Doohan, Sarron, Mamola …

Wayne made himself known to several generations of British race fans in the early 80s and the fascination spread to a global audience when his speed and skill elevated him to the forefront of the 500cc class. The achievements are weighty: winner of 18 Grand Prix, 19 pole positions, the first Australian to be 500cc World Champ, winner of the first Australian Grand Prix at Phillip Island in 1989. Gardner forged a very creditable CV at a time when GP was extremely tough and very punishing with the 500cc 2-strokes reaching a peak of performance and output. The dreaded ‘highside’ crash was commonplace it seemed and broken bones seemed more prevalent among the race leaders than they do now. 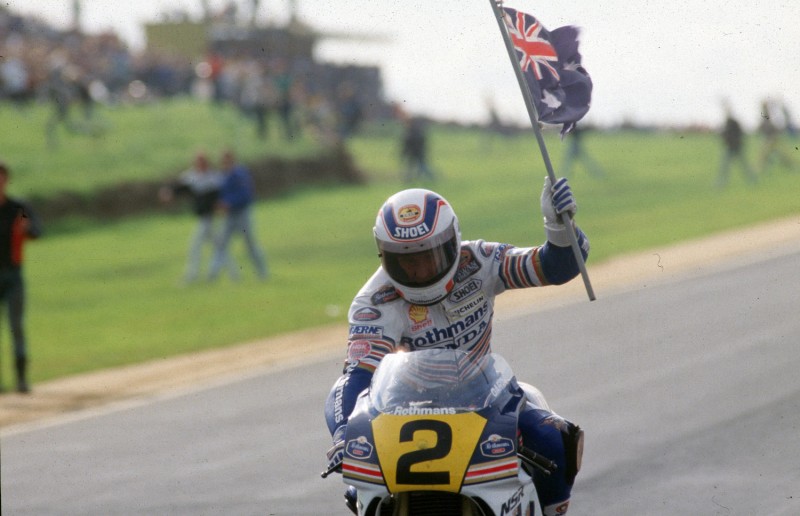 Gardner was good … but why did he reach ‘hero’ status? Outwardly the jovial personality on TV and in interviews helped. It was easier to root for Wayne than the seemingly dour and dry Eddie Lawson (how easy it was to paint characters!). There was also the way he rode a motorcycle. A dirt-track background meant that Gardner followed Kenny Roberts and Lawson as one of the ‘rear-wheel steering’ movement; I doubt there has been anything more visceral and exciting in motorcycle road racing than the days when tires were abused, wheels were out of line, rubber burned and smoke plumed, until traction control eroded this awe-inspiring sight in the early ‘00s. ‘WG’ was at the center of this spectacle and through proliferation of the scene during the late 1980s and 1990s.

Looking back now the bucking, throttle-on-full-whack, hang-on-for-dear-life aggressive vision that was Gardner on the Honda probably had just as much to do with the handling and setup issues of the NSR500 as it did through the Australian’s level of determination. I’ve heard plenty of plaudits for Wayne’s grit and stubbornness to ride through injury but not so many for his technical acumen in getting the Honda to behave; the 1988 ‘Shark’ NSR being a case in point and the handling issues a chief cause in Gardner missing a second title by just 23 points to Lawson across fifteen Grand Prix.

1987 was his golden term and an emotional championship won against challenges from his American rivals with Mamola (another lively and unmissable figure) also heavily in the mix. He became a national celebrity in Australia. From ’88 until ’92 Gardner’s story mingled phenomenal highs (his victories at Phillip Island in 1989 and 1990 involved some sensational racing and showed the Victoria venue as one of the finest tracks in the world) with painful lows such as a broken leg at Laguna Seca one week after his initial home GP triumph, broken toes and wrist the following year and another leg break and concussion in ’92; injuries that eventually prompted his decision to veer away from the sport and try four wheels. 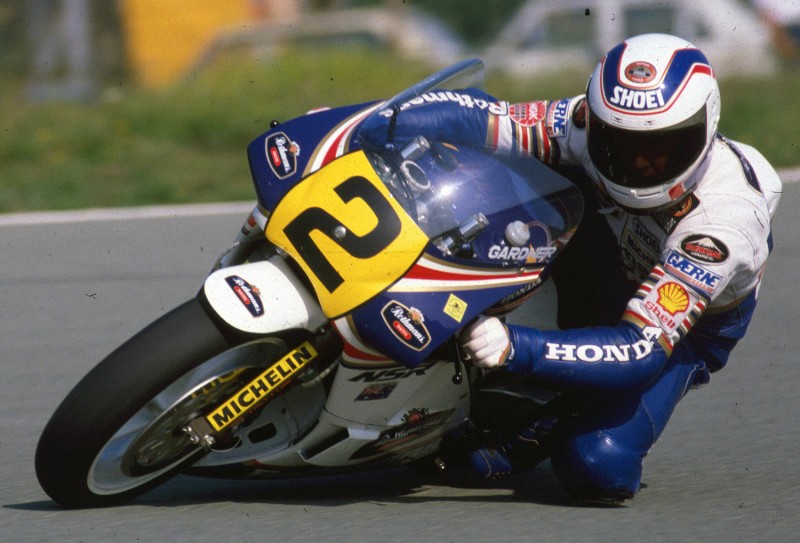 Perhaps the very first round of the 1992 season best summed up Wayne Gardner and his appeal. Racing around a dark and wet Suzuka circuit – in Japan his popularity perhaps eclipsed any other rider – Gardner crashed in the formative stages. He picked up the NSR (which he still dubs his favorite of the works Hondas) and blitzed his way back through the field on a smashed up ‘5’ (in the days when hardly any rider had a career number) all the way to fifth before sliding out again and finding the one part of Japanese fencing without foam protection and snapping his right limb. Bravery, balls-out and on the ragged edge, Wayne eventually paid for his charge but it was the sort of action that beggared belief and set him apart.

In a time where Grand Prix had to be watched and enjoyed on VHS video cassette then the Australian documentary by a production company called ‘Look at it my way films’ was also a big thing. It was a personal and revealing film that also used state of the art videography (super-slow mo in 1987!) and lifted the lid on Gardner, Grand Prix and the plight to be World Champion. That tape was worn thin in my household. It was also a pre-internet time so sportsmen and people in the public eye also carried more mystery and seemed more elusive, more untouchable.

There is that popular cliché: never meet your heroes. Thanks to a friend who provided some contact details I ignored the proverb and sat down with Wayne near his residence of Sitges, Spain for a long interview in the winter of 2015. It was a slightly surreal experience but I reveled in the stories and the whole session provided a cherished roll back down memory lane. I asked Wayne himself why he thought his racing and the way he conducted himself gathered such a following and dedicated fan base. “Not just walking past and ignoring people – fans – is something that I learnt at a young age because if you want sponsors then you need to have fans,” he said. “You are as only as good as your fans and your last result too. I enjoy meeting people, talking to them, laughing and socializing. I’m not one of these closed people that will run away from a signature or something like that. There are riders out there like that and people don’t respond to it and it shows now.”

“If you came across as someone who was quiet at that time then you were easily forgotten,” he adds. “If you were happy and seemed like you were enjoying yourself then you were more of a personality. One crucial thing – and I think Rossi and Márquez both show this so much – is that you show you love riding motorbikes and you love racing.”

Gardner was not a massive record breaker, not an athlete that decimated his sport but he was a good example that it is sometimes the way you achieve rather than what you achieve that creates a legacy.