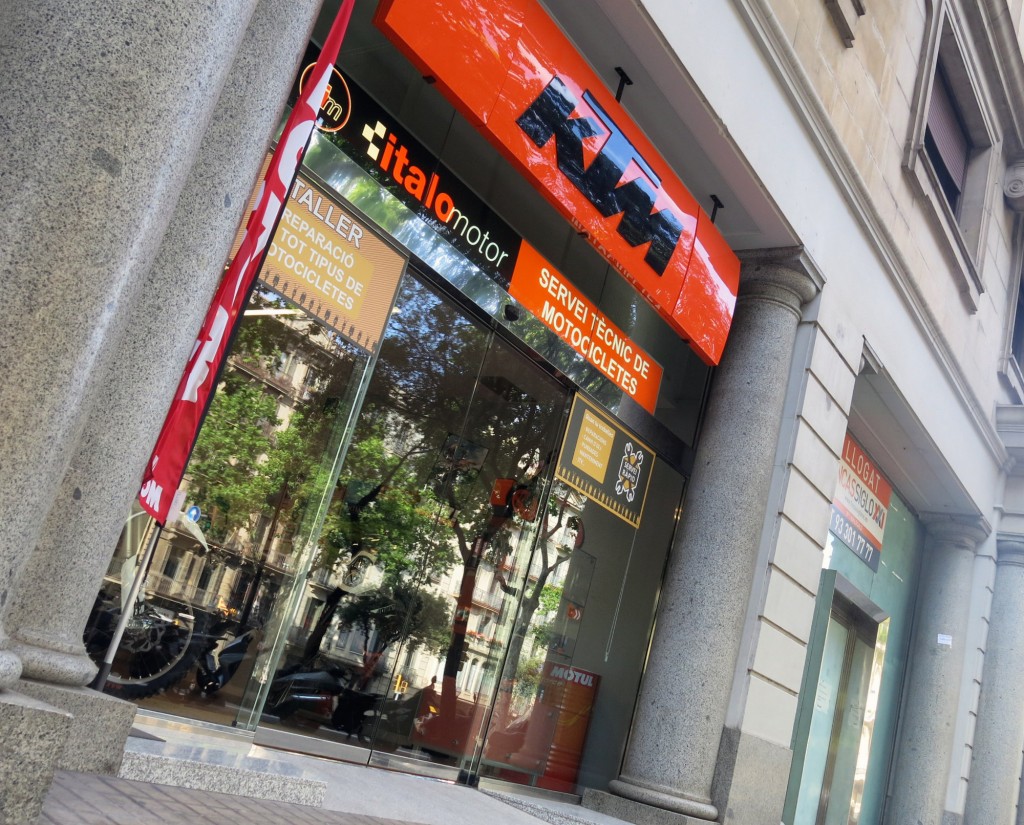 What happens at a KTM dealer? Insight from the brand new shop in Barcelona´s exclusive Diagonal shopping street.

At some point late last year on one of many trips through the heart of my hometown of Barcelona I was struck by the sight of a large glare of orange neon. “We’ve had a lot of comments actually, the shop really stands out,” smiles Eric Cirera, owner of Italomotors and overseer of KTM’s new flagship store in the Catalan capital. “It is like something fashionable or similar to a boutique. I don’t think there is any other shop like this with a KTM slant that is so uncompromising.” 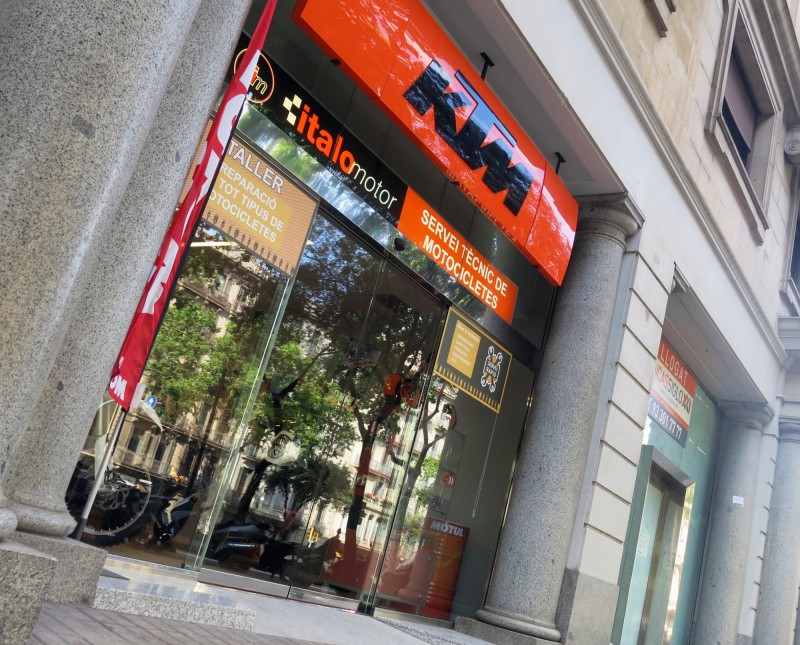 KTM has ruled offroad, invaded Street with aplomb in the last two years especially and now – in Spain at least – is turning heads from Barcelona’s shoppers perhaps concentrating on shoes or a new pair of jeans. Located on the famous ‘Diagonal’ thoroughfare that cuts through the diverse zones of the Mediterranean city, KTM have a ‘high street’ presence among designer locales unlike any other motorcycle manufacturer.

Italomotor have been KTM’s commercial outlet in Barcelona since 2002 but their dealership in another part of the metropolis (population of almost two million) shared floor space with Triumph and Suzuki. This new address in Diagonal is so distinctly orange, with the full range nicely arranged, PowerWear and PowerParts categorized and on display and, of course, that beaming KTM Logo. So why the new dedicated project (that incidentally threw open its doors for the first time last September)? “The reason was that we’d seen some of our competition closing and we noted a big change in the image of the company with bikes like the 1290 SUPER DUKE R and the ADVENTURE family coming out and then more models also,” says Cirera. “It meant we were able to refocus on the image and aesthetic of the shop and I suggested pushing ahead with a place only for KTM; in a way to follow the lead of the brand that was also going ‘hard’. I think there has been an important change. People remember KTM as an offroad brand and something they’d see in Dakar coverage and one that was quite exciting … but there are exceptional products coming forward for street use and we wanted to show them well.”

Diagonal is pretty exclusive and the top section has recently undergone an expensive makeover to expand pedestrian space and limit traffic. “Barcelona is a rich location for us firstly for the high number of registered street bikes in the city,” says Cirera. “Diagonal has a prime pedestrian setting and the image of the area is also important. The last two bring more prestige to the shop and the brand. It would have been impossible without KTM’s help just as much in the design of the shop as in actual support to get the products and hardware on the floor.”

In a way the shop is another token of KTM veering slightly away from their offroad roots. It is very hard to imagine a client wheeling an Enduro bike out of this place and onto a mud-splattered tow trailer double-parked. Another way to consider the recent shift of the company is to understate just how strong the Street section of the product catalog has become. “Having bikes like the ADVENTURE and the sister models is a little like winning the lottery for us because it is drawing new customers and clients,” Cirera adds. “In the last month we’ve taken delivery of the 1050 ADVENTURE and this is a bike that for price and performance fights directly against the Tiger 800, GS800 and again attracts fresh riders and people curious about this motorcycle.”

“I really think KTM are fighting hard now with BMW and Triumph and Ducati due to their Street products and before this would have been impossible,” he continues. “Now there is a real rivalry and I’m not just talking about the bikes but also attention to the client, post-sales with replacement bikes and test bikes – and we have a fleet of twenty – as well as shops of course. Offroad has always been healthy for KTM but now we have more interest.” 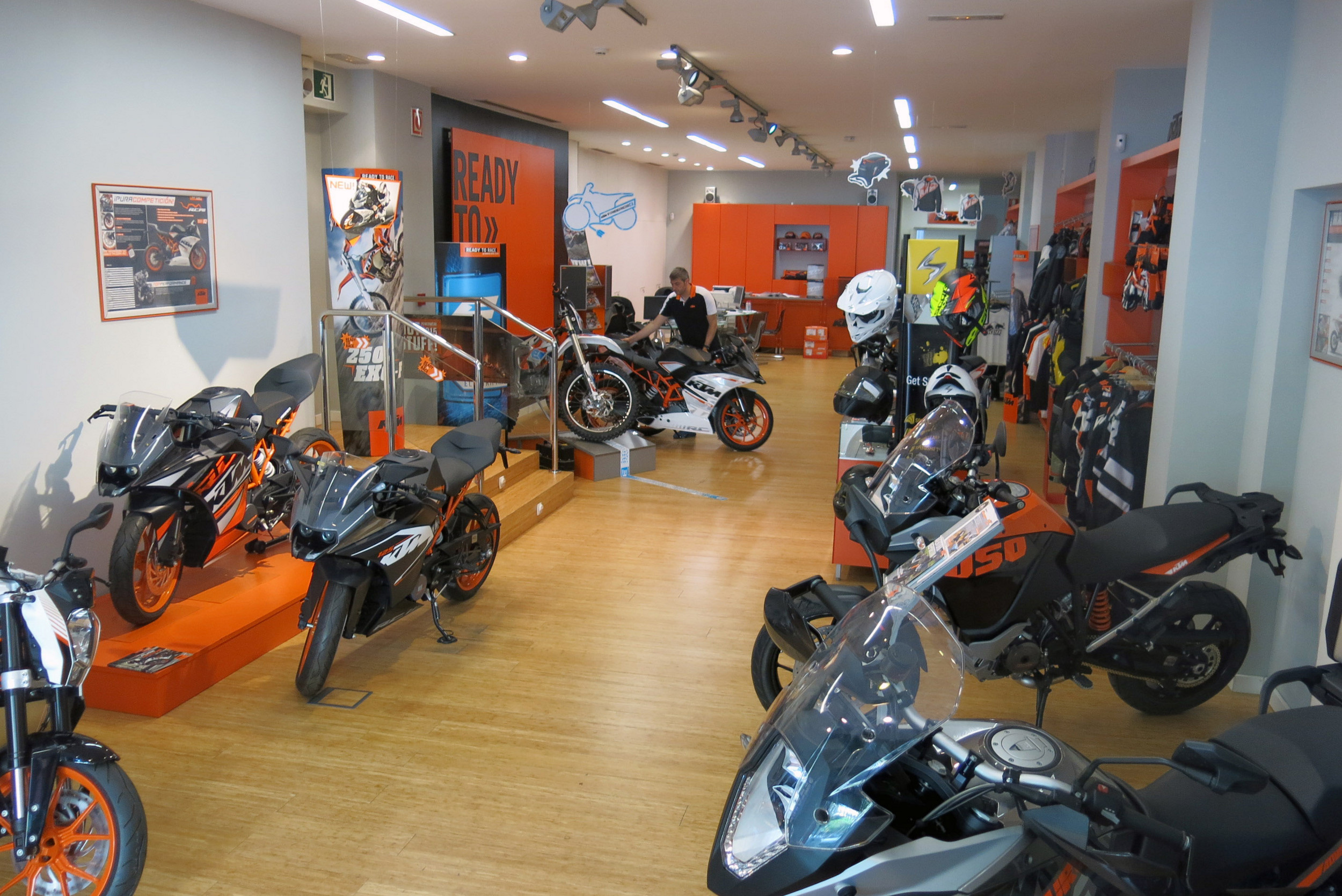 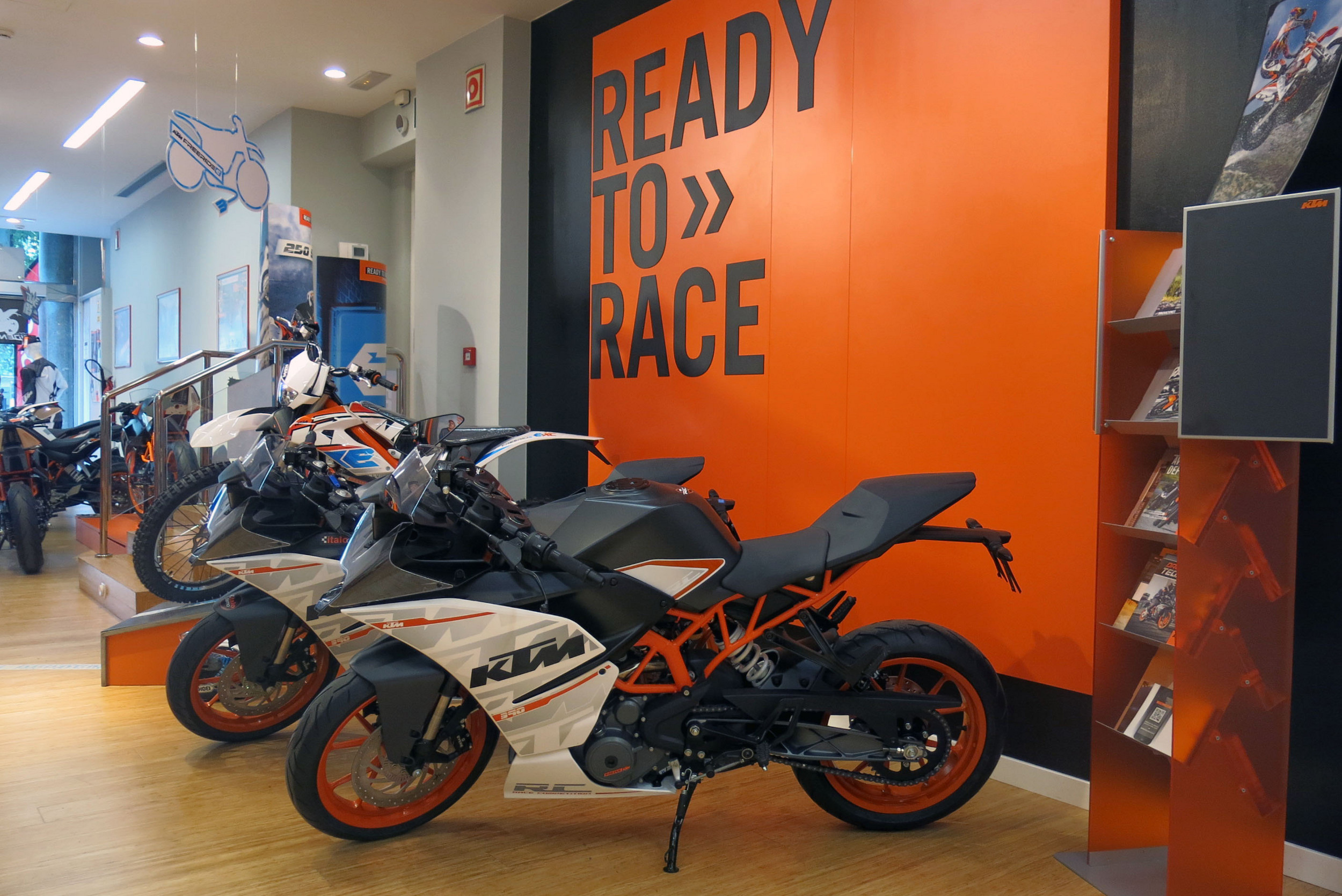 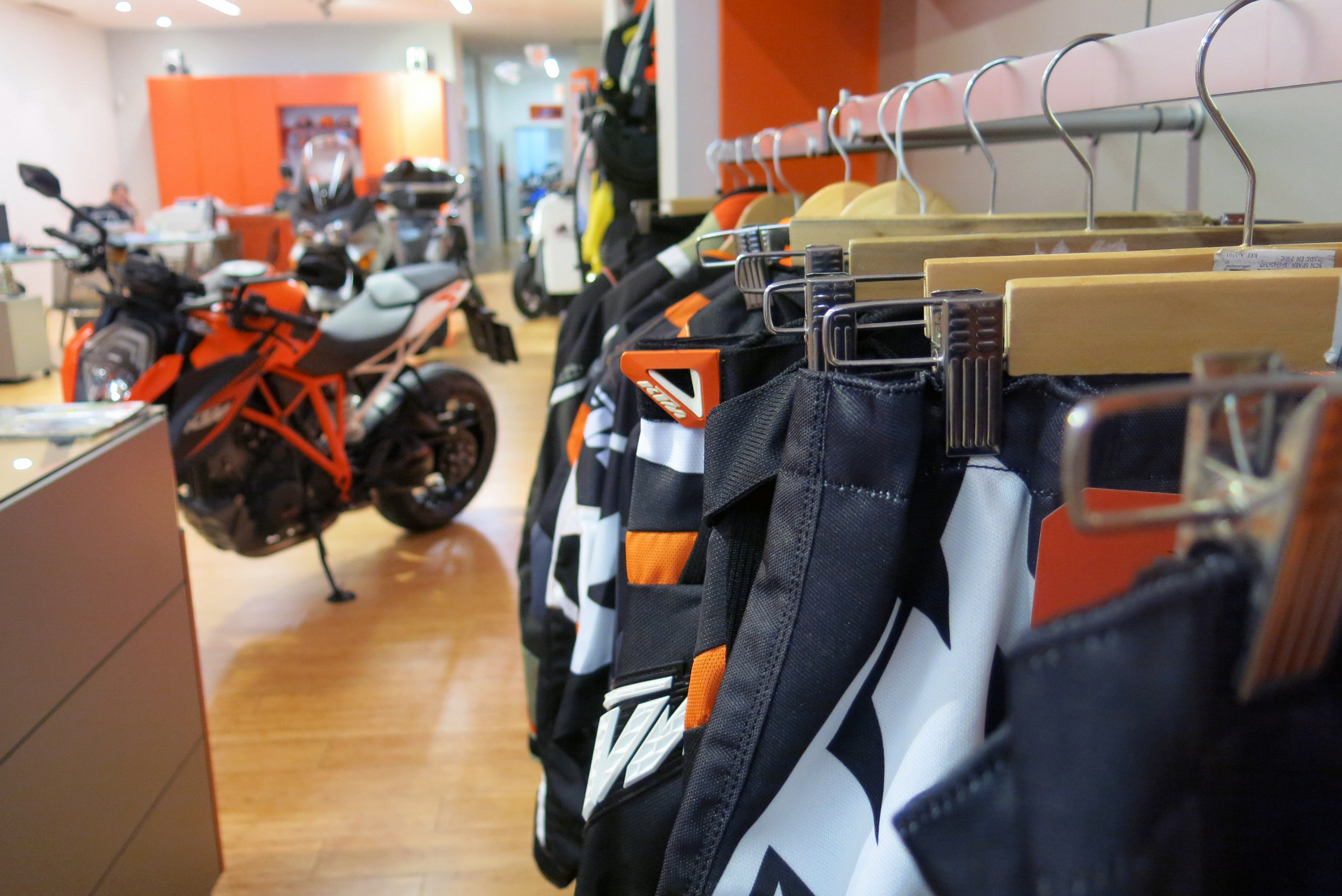 The KTM store is impossible to ignore for the heavy weight of traffic, tourists and residents that filter down Diagonal on a daily basis. But in this still-awkward time for the motorcycle industry is there not an element of risk in dedicating a piece of prime real estate just for a single brand? “The risk is in the volume of sales but we count on a good client base from our first dealership in another part of the city and I see little by little there is more interest, more customers and more work for the repair shop,” Cirera reasons. “Of course it is a gamble in one way but like KTM itself you have to look forward rather than remain still. In my experience if the manufacturer moves then you also see ‘traffic’ on the shop floor.”

“The market has crashed for everyone but there are brands for which it has fallen less because instead of ‘braking’ they have ‘accelerated’. This is the case with KTM. Suzuki, for example, in comparison has not really come up with anything new. People don’t come to see and talk about bikes they already know about; simply through having new products I can get new customers.”

So nine months after opening and still with gleaming surfaces and a feeling of the fresh and new, Cirera is already pleased with the response the shop has had. I ask if people don’t feel intimidated to come in and ‘browse’. A motorcycle dealership is normally not an informal place for quiet curiosity but my question is answered during the interview when several young guys come in and cast glances at the 1290 SUPER DUKE R. “Each person has an idea of the bike that they want in their heads and we just have to help them find the right model by listening to what they want and offering advice,” the boss offers. “Sometimes you don’t have to say much and just push some keys into their hands.” 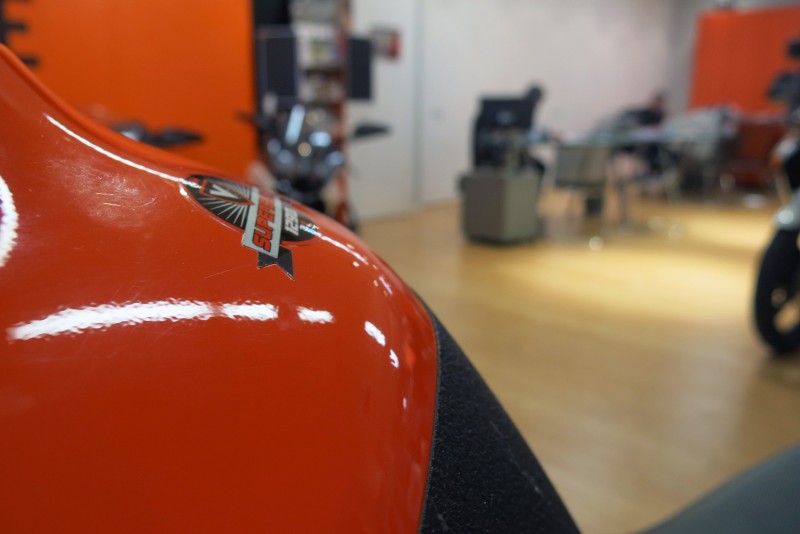