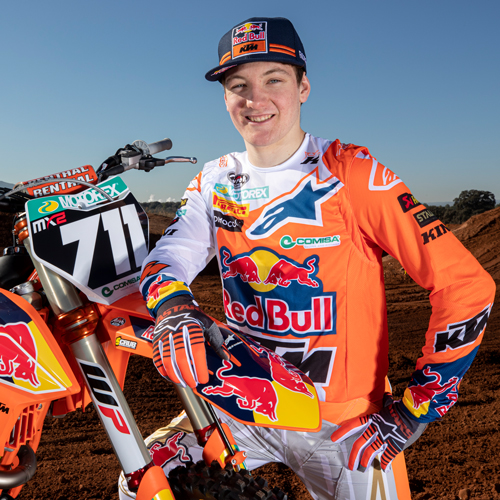 In 2020 seventeen-year old Rene Hofer will be the first Austrian this century to represent the most decorated team in MXGP. What’s it like to feel the full glare of orange? 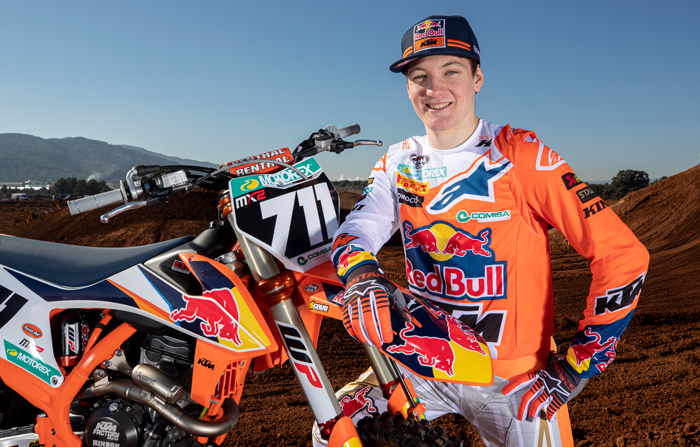 Red Bull KTM will field the best motocross line-up of all-time in 2020. The combination of Tony Cairoli, Jeffrey Herlings and Jorge Prado means a total of fifteen world titles in the MXGP class. In MX2 2019 Rookie of the Year Tom Vialle is already touted as one of the pre-season championship favorites after seven podiums and 4th place in his maiden term during 2019. Converting this quartet into a quintet is Rene Hofer. The teenager has FIM Junior, 125cc and European Championship honors all in orange (and was leading EMX125 in 2018 before a season-ending injury) but compared to all the clout and success of his teammates Hofer has a unique narrative.

“He’s a local!” smiles Team Manager and Team Technical Co-ordinator Dirk Gruebel. “The best motocross rider from Austria at the moment and the best since [2018 Dakar winner] Matthias Walkner who tried MX2 and ended up being good in the old MX3 class. There will be a spotlight on Rene but we think it is nice to have a guy from the country where the headquarters is. In terms of pressure, we don’t know how it will be for him…” 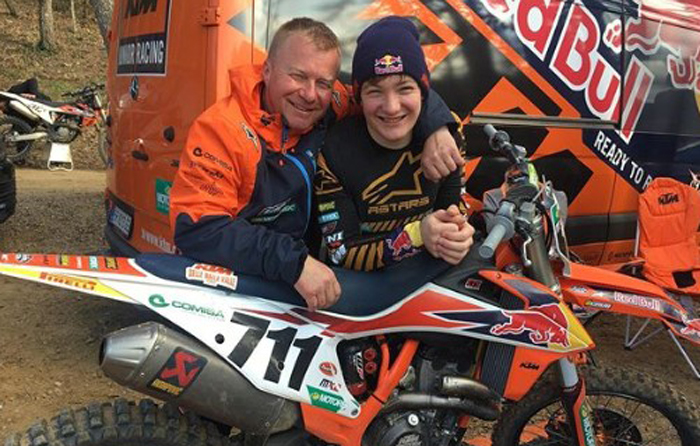 Red Bull KTM has fielded the leading riders from Italy, France, Holland, Germany, South Africa, Spain and Latvia in recent years, and there is now a special link to the Mattighofen factory and Munderfing race workshop. Hofer earned his shot after just one season in the EMX250 European Championship (the feeder series to Grand Prix) thanks to two factors. Firstly, two eye-catching MX2 wildcards where he not only scored points but also the ability to break into the top ten with a seventh place overall in the Grand Prix of Italy. Secondly, the immediate impact of 2020 teammate Vialle. The eighteen-year-old Frenchman had not excelled in EMX and was considered as a ‘gamble’ and investment by the factory and the race team for 2019. Vialle’s skills and mentality (and the crew’s work) meant he was able to forge an outstanding campaign. So, why can’t Hofer achieve a similar effect?

“Tom had a couple of moto wins in EMX in 2018, Rene didn’t reach the same results in 2019 but was consistent and then he also scored points in the Czech Republic Grand Prix as well as a top ten finish in Italy; that was really good and maybe too good because you don’t want riders to think ‘this is too easy’,” Gruebel says. “We’ll approach 2020 as we did with Tom this year: Rene is a newcomer to the class. From the outside, he might not have the same style as Jorge and Tom but he has a big heart and he is putting in the hours. He wants to be here. He will do good.” 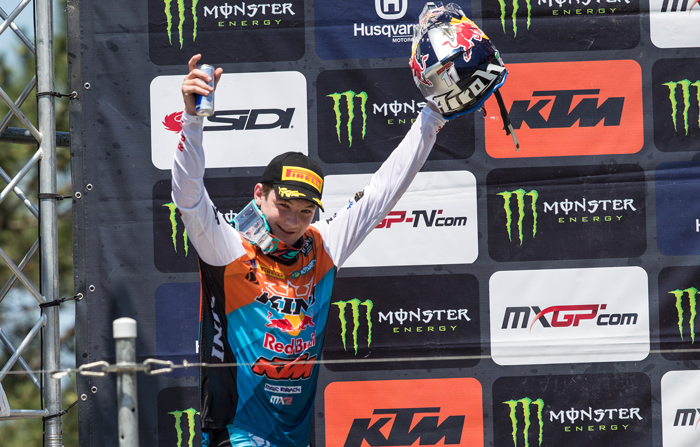 Hofer, from Linz, might have the right passport to generate sizeable interest in the corridors of Mattighofen but once ‘across the border’ of the race team that status carries more weight. “The opportunity to have an Austrian [in the race team] doesn’t happen very often so if it’s there then we try to grab it,” says KTM Offroad VP Robert Jonas. “I would definitely not say it is easier for him though by virtue of the fact he is Austrian.”

Jonas should know. The former 125cc star was the last home-grown rider to come within the sphere of the works set-up and the sought-after SX technology at the end of the 1990s. Jonas suffered a serious knee injury before he could really show what he could do on the world stage in the first year of the new millennium. It happened two years before Hofer was even born. “I remember a little bit how it was,” he recalls. “At the final round of the Austrian Championship In ’99 I won the title and on the Sunday evening the manager responsible for the Austrian riders at that time received a phone call from Mr. Pierer [Pierer Mobility CEO] with the information that I would have a spot in the factory team. For me, it was a surprise and I was not counting on that opportunity. For sure I was thinking and working towards it…but it was a big surprise.”

“I don’t think that is quite so much the case for Rene,” he reflects. “He was closer because of some good form in the European Championship [six top-five results from the eight rounds in 2019] and due to Jeffrey [Herlings] being injured he had the chance to be with us under the tent and to smell the factory team environment.” 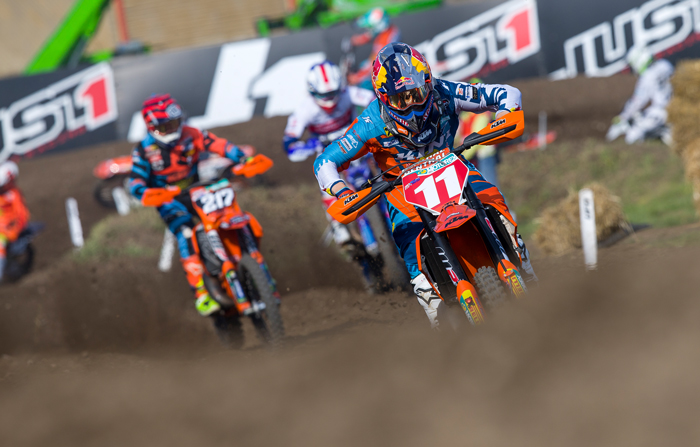 “It is a big opportunity and for sure a big challenge,” Jonas adds, “but I feel he also deserves it because he made some good progress. He surprised us with his two GP opportunities this year. He didn’t get those results for free because he didn’t have the best starts and worked his way through.”

It is Hofer’s mindset and commitment that has strengthened his case with KTM race management and earned the total belief and conviction of people like Motocross Manager Joel Smets and former KTM Junior Team Manager Didi Lacher, whose judgment is highly valued in the Munderfing Race HQ.

“He doesn’t give up. He always finishes the races and there are no complaints about circumstances,” assesses Gruebel. “He knows when he has made a mistake. I see him training hard. He is not shining in the sand races yet, but it was the same with Tom; the more time they spend in Belgium – there are not too many sand tracks in Austria – the more they improve and that will happen with Rene.” 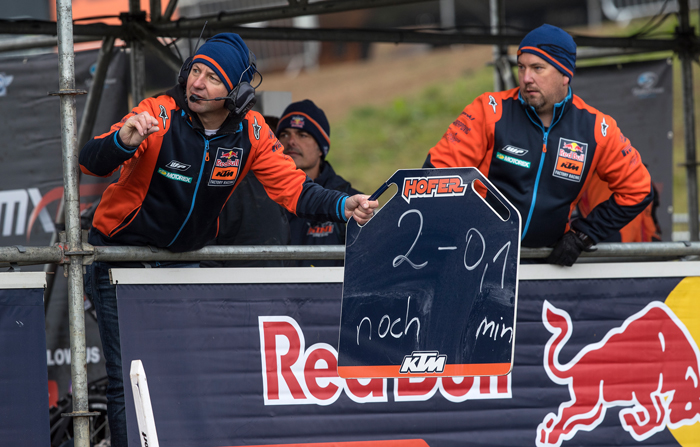 “He is a guy that can perform when he has to and you need to have that,” stresses Jonas. “He has a lot of work ahead, but I think he has a good chance to make it.”

True to cliché, Hofer is the archetypal ‘old head on young shoulders’ and is aware that his 2020 is more than just a dream slot with the best factory team in the FIM World Championship paddock. “My phone was blowing up when I got confirmation,” he grins. “For me, it is such a big thing, and for some other people too, but I try to go smoothly with it.”

“Tom had an unbelievable season this year, and this is not ‘usual’ [as a rookie],” he claims. “But it will be a learning year and I hope to get some results and confidence.” 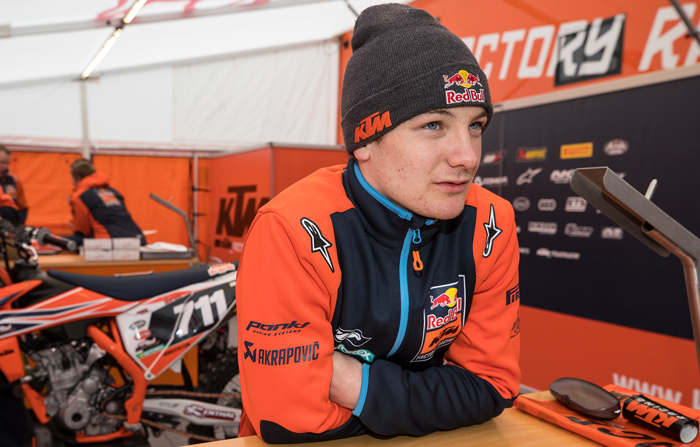 Hofer has yet to race in a major international meeting away from European shores. The twenty-date MXGP calendar will be a vast education for an aspiring athlete that is still in school (“officially I’m in year 12 so just one more and I have the possibility to leave when I’m eighteen but we’ll decide this in January”). “Traveling, cultures, overseas, food, time zones: I’m not used to this…. but Tom coped fine so I’m sure I can,” he says.

Aside from the attention, the setting and the pressure, Hofer will also have to gain a full appreciation and understanding of the demands of MX2. “Well, there is much more riding time compared to EMX, which means getting used to the track,” he explains. “The starts are also so much more difficult. All the guys are super-close together and the braking points are much later. I need to get used to this a bit more. The speed is not too different, and you can see riders like [Roan] Van de Moosdijk or [Alberto] Forato have the pace to run near the top five. The starts are even more important in MX2 than EMX. Overall it is so much different in terms of intensity.”

Intense is probably a fitting word for the experience that lays ahead for Hofer. But yet more spoils for Red Bull KTM with a native flavor might taste that little bit sweeter.