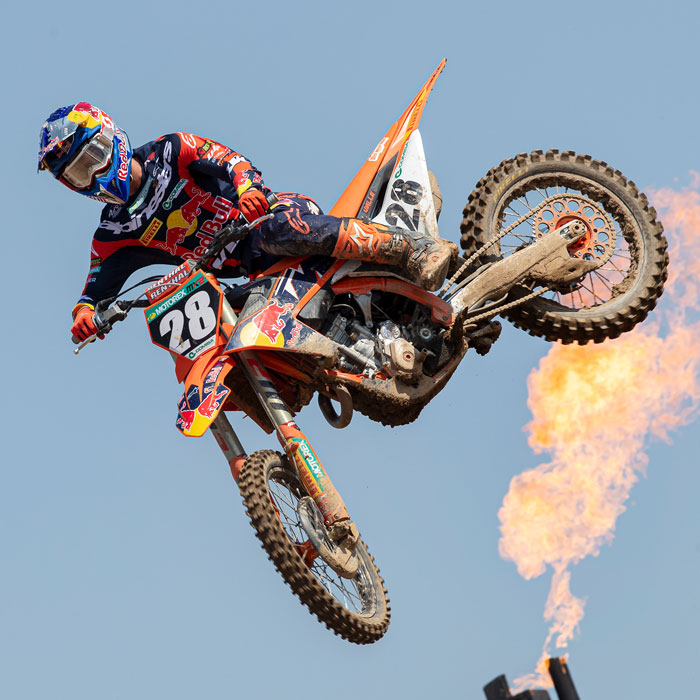 HOW THE TITLE WAS WON

Story moments, highlights, and other markers of KTM’s first FIM World Championship from 2022 and how Tom Vialle faced adversity for a memorable motocross success.

The odds didn’t look great. Red Bull KTM Factory Racing were about to start the 2022 FIM Motocross World Championship with their backs against the wall. Fate, tragedy, misfortune, and a gnarly schedule all conspired against the superb works crew that had claimed either an MXGP or an MX2 title – the two main classes of MXGP – every year (except for one season) since 2010.

With a timeline outlining the tale, here is how KTM managed to continue its phenomenal run in Grand Prix.

December 2021: Red Bull KTM Factory Racing are deep into an intense period of preparation for 2022. The Covid-influenced 2021 schedule meant the season ended late, on November 10th (with Jeffrey Herlings’ fantastic last race, last round MXGP championship victory in Italy) and there are less than three months to rest, train, test and develop the latest generation of KTM 450 and 250 SX-F machinery for the demands of elite level GP competition. It is the shortest off-season in world championship history and Red Bull KTM now has three athletes – all with Grand Prix winning experience – on the roster.

December 2021: The team, KTM, Austrian motorsport and the international off-road motocross community are rocked by the news that Rene Hofer has died in an avalanche in his native country. In the aftermath Red Bull KTM somehow presses forward with their work for 2022 and with Herlings (MXGP) and Tom Vialle (MX2) as the sole riders.

January: Tom Vialle makes his first laps with the brand new KTM 250 SX-F. Vialle had been recovering from an ankle injury; a physical problem that badly limited his training and ability to test and set-up the bike for the new campaign. Vialle is still one of the favourites for the MX2 championship. He entered Red Bull KTM as a relatively unknown rookie in 2019 and won the Swedish GP and classified 4th in the world. He then earned the gold plate as champion in 2020 and fought until the final rounds for the same prize in 2021.

February: Vialle finishes 5th and 2nd in two pre-season ‘warm-up’ races in France and the UK.

February: Two weeks before the MXGP calendar begins, Herlings crashes late into the official 2022 photoshoot in Spain and breaks his left heel. The injury, together with other problems with his right limb, means he will sit out 2022. Frenchman Mathys Boisrame is briefly drafted into the team to replace the Dutchman but does not remain beyond the first meeting. For seventeen of eighteen Grands Prix in 2022, Red Bull KTM have just one representative on-track.

February: The team and a large part of the MXGP paddock pay a moving tribute to Rene Hofer at the season-opening British Grand Prix. The race had been delayed by one week due to fierce storms in the UK. Vialle starts the campaign strongly with the second step of the podium at a chilly Matterley Basin.

March: Argentina. Vialle wins his first moto of the year at Neuquen and also takes the overall victory. It is the first for the new KTM 250 SX-F and proves the team is getting up to speed with its efforts to keep the bike at the peak of the fastest 250cc class on the international stage.

April: Italy. Vialle’s first ‘1-1’ scorecard leads to his third win in succession allows him to assume control of the red plate as MX2 standings leader. The championship is already forming into a two-horse race with Vialle’s rival since 2020, Belgian Jago Geerts being the other pacesetter.

May: Italy. Round 7 of 18. Vialle earns his first Pole Position of the season at Maggiora. He wins a moto and finishes 2nd overall for his fifth podium result in a row as Geerts heads back to the top of the points table.

June: Germany. Round 11 of 18. A second moto technical problem causes a ‘DNF’ when Vialle looked to be on the way to seventh triumph and fourth on the bounce after strong appearances in Sardinia, Spain and France. Geerts fronts the MX2 title chase again. The pair would trade the red plate on one more occasion – when Vialle owns round 12 in Indonesia – before Geerts becomes the man to chase for the remainder of the schedule.

July: Czech Republic. Vialle has an ‘off day’ in Loket. His 5th position is one of only two meetings in 2022 when he does not walk an MX2 rostrum.

July: Belgium. Tom confirms a contract switch that will see him compete in AMA 250SX/MX for 2023. Vialle decides to continue his story with the KTM 250 SX-F in the North American wing of Red Bull KTM. Even though he is only 21 and could have raced two more seasons before aging-out of MX2, another title win would have obliged his move to the MXGP category anyway (an FIM ruling forbids any rider from defending an MX2 crown twice). Vialle was already slated for a KTM 450 SX-F next to Herlings for 2023 but decides to chase his dream of conquering AMA Supercross. The final races of the 2022 season will be his last in the MX2 world championship. In Belgium Vialle finishes 3rd. The points deficit to Geerts stands at 23 with four rounds (a maximum of 200 points) to go. Red Bull KTM confirm the signatures of 18-year-old rookies Andrea Adamo and Liam Everts in MX2 for 2023.

August: Sweden. Jago Geerts wins for the last time in 2022 as Vialle is runner-up at Uddevalla. The rivals share 1-2 results so the points differential stays at 23 with 150 remaining.

August: Finland. Round 16 of 18. Vialle fires back. #28 scoops his first victory since Indonesia and faces the prospect of a tense home Grand Prix at St. Jean D’Angley the following weekend. He wins again and although Geerts salvages the third step of the podium the series goes to the final event in Turkey with just 2 points between them.

September: Turkey. An incredibly tense shootout between Vialle and Geerts is decided by just 4 points as Vialle defies the pressure and the nerves to go 1-1 in Afyon for the fourth time in 2022. ‘TV’ signs-off a four-year MX2 career with two world championships and 24 trips to the top step of the rostrum. It is Red Bull KTM’s fourteenth MX2 crown since the class was created from the old 125cc two-stroke division in 2004. Vialle is the fourth rider in the team’s history to wear at least two MX2 crowns. The fresh performance threshold and innovative chassis concept of the new KTM SX range is proven right away. The team embark on a well-earned party in Afyon!

Check out the video below for a season recap.