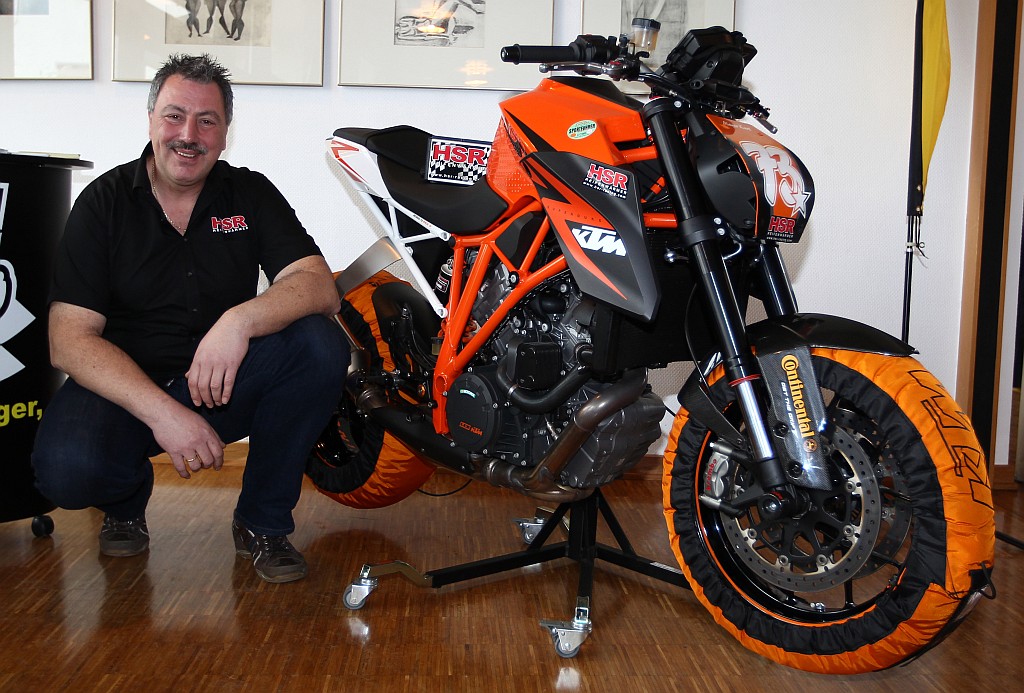 The German racing series SUPER DUKE Battle isn´t only about serious racing, it´s also about fun and family environment. More than 40 competitors race in the KTM SUPER DUKE Battle. One of them is Peter Ubl. The 51 year old, from the small German town Ingelheim, who is competing with a 2014 1290 SUPER DUKE R, carries out an interesting part-time work – he produces tyre warmers.

Electric blankets. Who would not think about older people and bus rides in combination with dodgy selling events, coffee and pastries? Well, we don´t. We think about Peter Ubl, hobby racer and competitor in the KTM SUPER DUKE Battle and part-time manufacturer of tyre warmers for motorcycle racing tyres. 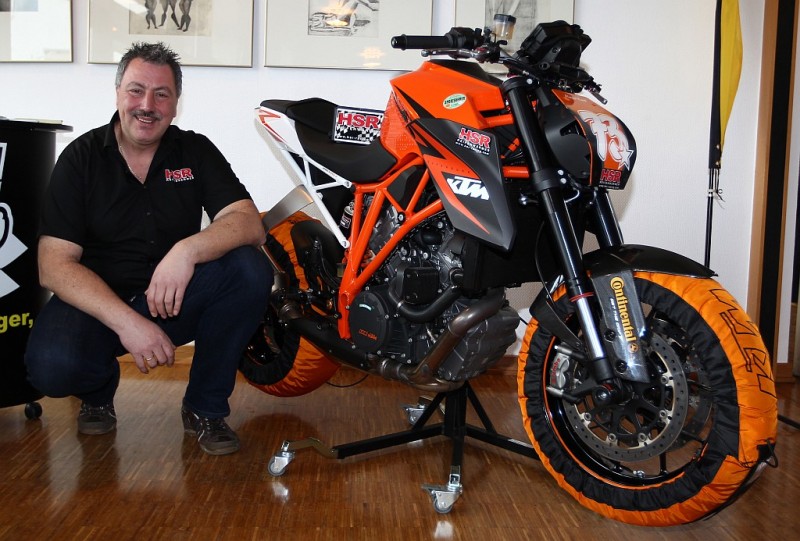 Since 2003, when KTM started the production of the SUPER DUKE, there are races with the SUPER DUKE in Germany. What was once initiated by the importer, is meanwhile organized privately. Some enthusiasts around the racing fan and KTM Dealer Konrad Schittko from Unna, mount the KTM SUPER DUKE Battle. The 2014 season includes a training in spring and six race dates with two heats each. One third of the starting grid plans to launch the season with the new 1290 SUPER DUKE R, the rest relies on the tried and tested KTM 990 SUPER DUKE (with or without R) – not everybody can afford a new race bike.

Peter Ubl is competing in the KTM Battle since 2013. The 51 year old from the red-wine-town Ingelheim, a jovial giant with impressive 128 kg fighting weight, can be encountered regularly on the racetracks in various racing series and from time to time as an instructor at race trainings. Finally, he stepped into the SUPER DUKE Battle with a KTM 990 SUPER DUKE. This year he is one of the 15 competitors who seriously think about racing with a 1290 SUPER DUKE R.

“I tested my new bike once in Cartagena”, says Peter Ubl. “With 180hp the 1290 SUPER DUKE R has 50hp more than the old one. It´s completely different; especially for me as rather heavy rider, because on the straights it´s now pretty easy to keep pace with the big bikes. My SUPER DUKE is basically the standard version, nevertheless, its riding better and more precise than my previous model with revised fork and shock.”

For the new 1290 Ubl budgets the racing exhaust and the appropriate mapping, later he will think about further tuning of his bike. “I think, in general, the standard bike is off the roof. It can be improved with the race chassis, that means changed suspension struts or fork, that KTM is offering for EUR 3,200. The question is, if I could really take advantage of these adaptations. Even the really fast riders wait and see how they get along and if you really need the upgrade. Another possibility is to have the standard parts reworked, that would maybe amount to EUR 600 or EUR 800.” 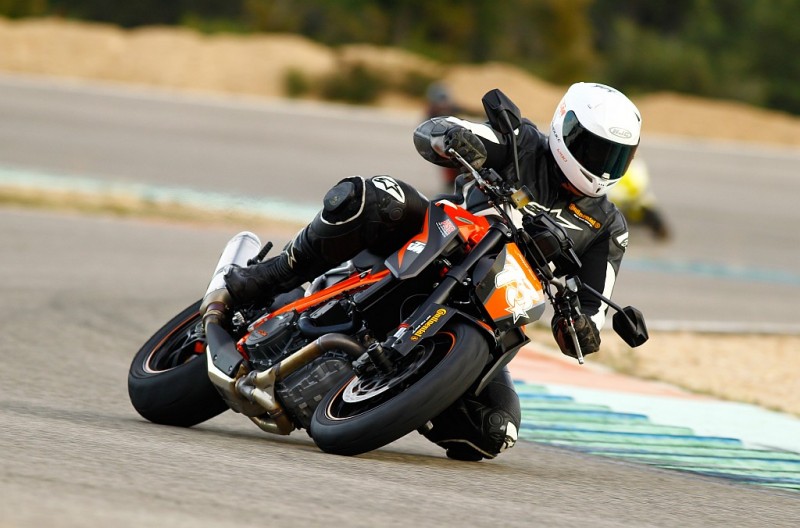 Family man Ubl earns his living as a service technician for copying systems. The manufacturing of HSR tyre warmers is a part-time occupation. “I deal with the tyre warmers in the evening and at the weekends. In 1999, I produced the first set for myself, because in those days they had been pretty expensive. In 2002/2003 it became professional, when I started to produce tyre warmers for others as well. Today I employ a seamstress and a part-time employee and two people, who install the cabling and the thermostats. In summertime, I employ up to six people in my workshop. Meanwhile we produce about 600 to 700 tyre warmers per year.”

The range includes two tyre warmers for motorcycles made of Nomex material: the reliable HSR Classic for EUR 249 and the HSR Radial with transverse heating wire and improved lateral border for EUR 349. The tyre warmers are sold via the internet. There are two newcomers to the range: tyre warmers for race cars, which are manufactured made to measure according to the correct dimensions and can be acquired for EUR 1098 per set. Initially, the abbreviation HSR signifies “hot socks”, the R stands for “racing”. “But then a friend recommended to go without the socks and just leave it at the three letters. I accept this advice.” Most of the customers come from Germany, in addition to that there is a trading partner in Switzerland. “In terms of product quality and heating power HSR can be classified in the upper level”, Ubl evaluates his position in comparison to the competitors. “Most of the products in the market are produced in China. There are three or four leading manufacturers that are producing good quality products, but for a plenty of money. I work almost without advertising, that´s one reason why we can produce at favorable prices.” Currently he is processing requests from Australia and New Zealand: “Obviously ´Made in Germany´ is pretty popular.”

As a hobby racer, or as a businessman, Peter Ubl sees the KTM Battle as an enjoyable experience: “Last year, 22nd place was my best result. As long as I have fun and can continue like that, it´s ok. Maybe, with a bit of luck, I´ll get a point. Anyhow, I´m just riding when it´s dry. When it´s raining, I´m not racing.” With a twinkle in his eye: “I don´t want the bike to get messy.“ But Peter Ubl isn´t only racing on the race track, he is also riding on public roads: “Then I complete the SUPER DUKE with lights, indicator, exhaust, e number and number plate and get my jollies on the road.” 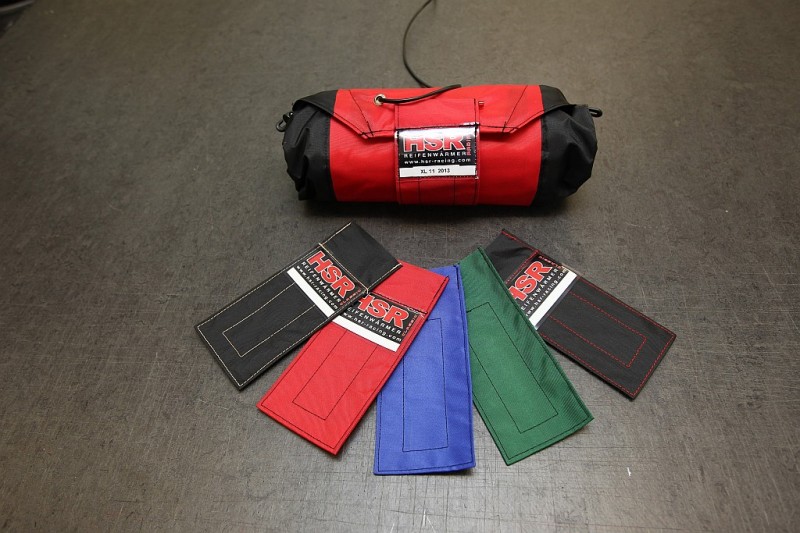