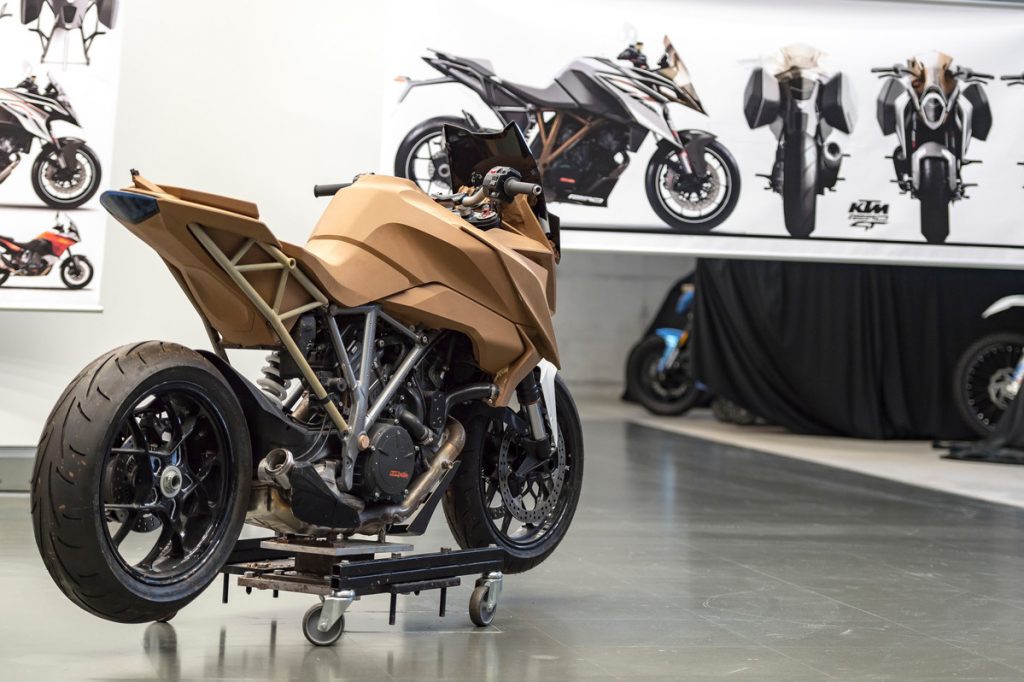 Have you looked at part of a KTM and wondered ‘how did they come up with that?’ Ideas fly around constantly in the fabrication of a motorcycle or an update of a current model. In an effort to tap into that creative process of what makes it onto a bike (and what doesn’t) we peered into the confidential world of R&D at Mattighofen …

We’ve caught Gerald Matschl on the hop. The Vice President of R&D Street and overseer of the hefty boom of street motorcycles in the KTM catalog is looking a little stumped. We’ve just told him we have a fantastic concept for a new bike: how would it pass through the system at the factory?

On a daily basis in his job Matschl has to analyze, evaluate, reject or develop his technical team´s ideas, notions, beliefs and convictions … however we doubt whether he’s had to talk through the process to someone who isn’t wearing an orange shirt before. 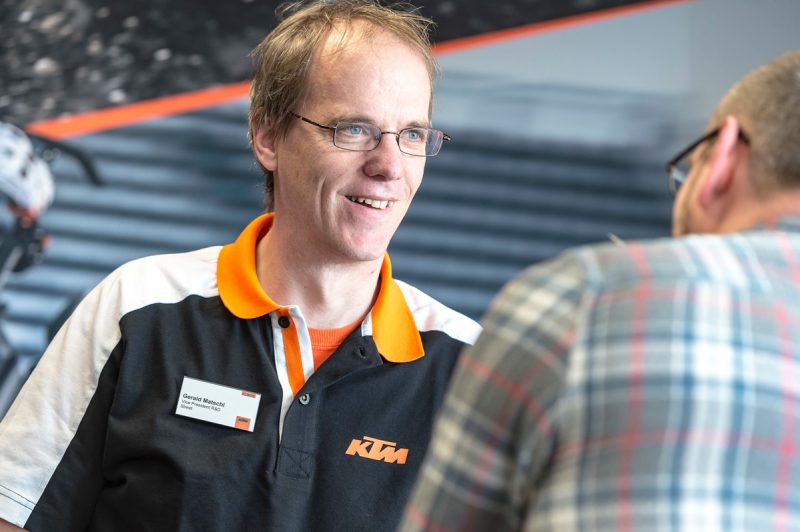 Firstly he feels compelled to explain the structure of R&D and how the department has grown from thirty people to over five hundred in the space of twenty-five years. This expansion necessitated new organization and streams. “We had a re-think for how we run and set up R&D,” says Matschl, who is responsible for constructing the web. “[Before] We had Project Leaders, and then the constructors and engineers underneath; that person was responsible for the technical side but also leader of the staff and teams. KTM was already getting too big so we established a new development system and that was my job; to place specialists for fairing parts, welded assemblies, casting parts and all these types of things. A lot of specialist groups and more of a matrix organization. We still have that today and I worked on this up until last August before moving back to the project side in September.”

So if I swap my keyboard for a pencil or CAD program then how would I go about getting an audience in R&D for my bike ‘brainwave’ and possibly – one day – see it part of the assembly lines on the factory floor below us?

“So for your idea then the first thing we’d have to do is bring in some specialists say for welded assemblies or strength or stiffness calculation to go over it,” Matschl reveals. “The project leader would have to analyze all the aspects; quite often we have ideas that looks perfect but when you get into the finer details you find out that, say, in nine ways it is better than what we already had on a bike but in one way it is worse and there is no simple way to solve it. The idea then has to be thrown away.” Gulp. “If the idea is good then it progresses with the specialists until we see that it is technically feasible and we show it to Kiska and then we immediately start to build a prototype to be able to test.” 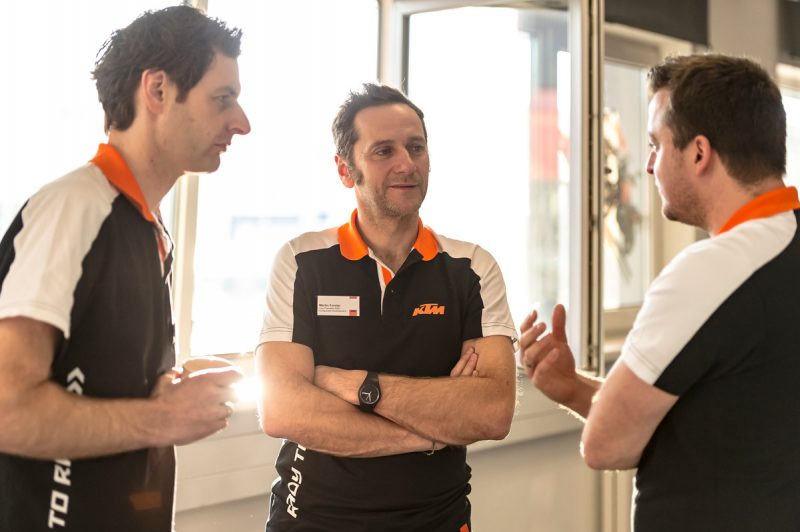 Phew. Our chassis modification/bodywork touch/engine component has survived the first hurdles and even the genius touch of the designers at the Kiska agency. Are we set?! Not quite.

“There is often quite a difference between theory and real life!” Matschl emphasizes. “One of the strengths of KTM is that we are able to build prototypes quickly. We can get on the track or road fast and see how things behave. If all is OK and we like it then we go on … and this could take any amount of time.”

‘Patience’ it would seem is a keyword in development (probably just in front of a term like ‘hope’) and as a motorcycle moves through prototypes stages then things become more and more exciting. Matschl: “From our development phase we have a feasibility study and it depends on the project but we typically build a P0 prototype and as many of those as we want. The feasibility phase can take around half a year. For a new project it can take up to two years. There is no general rule for how many P0s you will build. At the end of the feasibility phase we all know the general look of the bike, so all those cool sketches you normally see are done at this time.”

“For sure it is one of the most exciting [stages] because you can have the most influence during the final phases towards any characteristic of the motorcycle,” he adds. “When this is done you start with the serial development process which can take three years for a new bike and moves from a clay model until production. We have three stages of prototype: from P0 to P1 – which we count as one stage – is made from the first clay models and ergonomic and heat tests and riding dynamic, when all is done the results and information go back to the clay models. Then follows P2 which bears most of the tests and we essentially set-up the bike.” 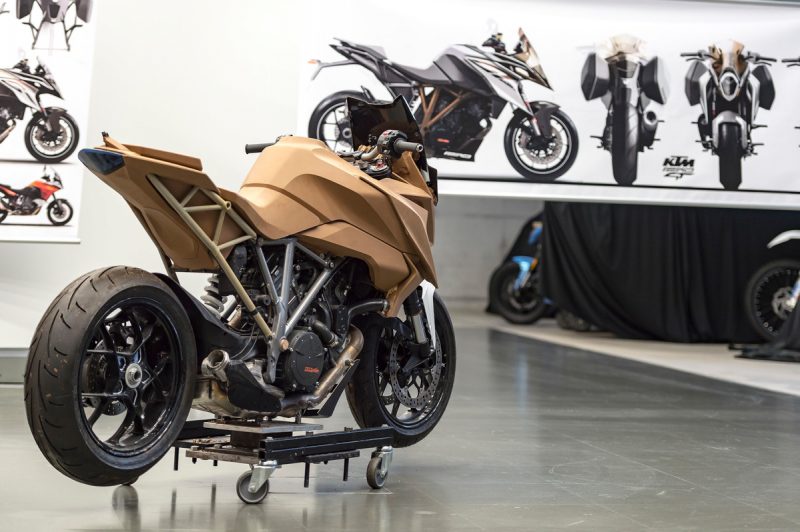 P3 is already made from machine-produced parts and is used for final vehicle tests and fine tuning. Sculpture of the P3 then would be the final seal and confirmation that our grand scheme has helped make a KTM a better motorcycle. The machine to produce our idea then has to be formed. ”When all is done we release the tools and they [the bikes] can be produced,” Matschl concludes. “From that assembly we build a P3, which is very close to the production model. There are always adjustments and a lot of testing needed here as well as final tuning on parts. Then it is sample production and pre-serial production and we’re done.”

Inspiration and research followed by persistence and perseverance seem to be essential qualities as part of a team to make motorcycles. Hopefully a ride on a finished bike would then be the order of the day before a coffee and then more analysis and thought about how the next version could be better: such is the life of an engineer.