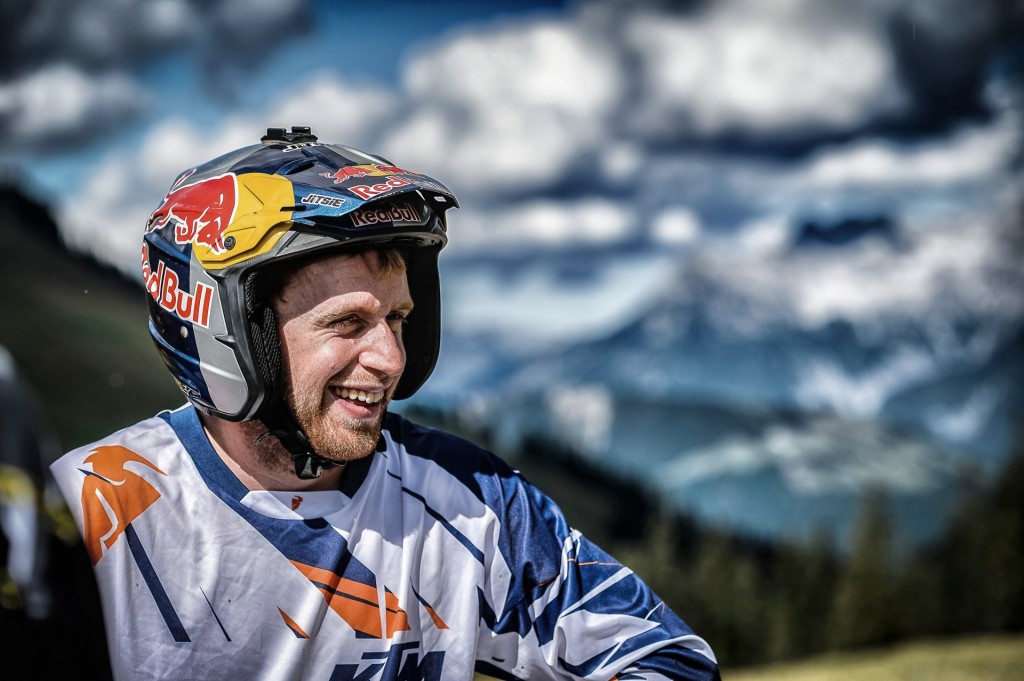 The stunt cyclist internet phenomenon bounced his way on the KTM stand at the INTERMOT 2014 show in Germany to chat about his new fascination with the KTM FREERIDE E. 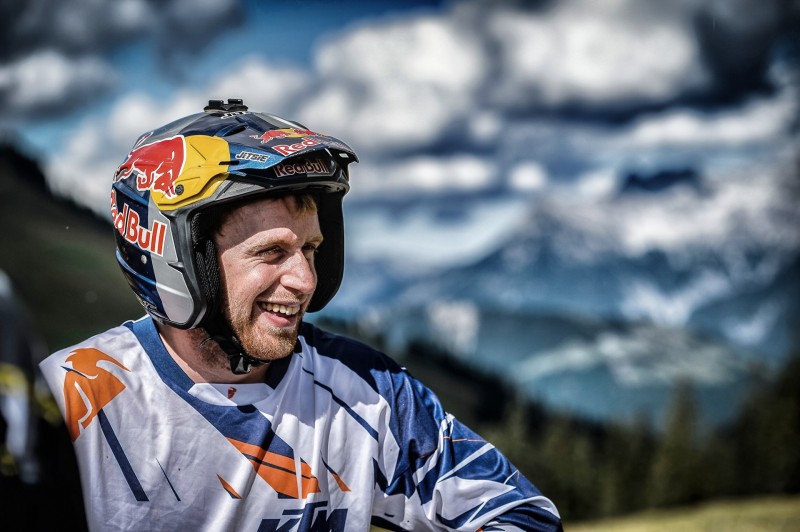 One of the star draws of the INTERMOT 2014 show was not the shiny 1290 SUPER ADVENTURE. Nor was it the gleaming array of machinery from Moto3 to Street to Offroad. Instead it was a man on a bicycle. When Scot Danny MacAskill hopped from the reception area to the presentation podium over the heads of the gathered press, KTM already had the coolest intro of the 2014 exhibition in Cologne.

MacAskill’s ability on two wheels has been seen more than 170,000,000 times on the internet through various videos and a dream association with Red Bull. In 2014 the rider evolved his curiosity with KTM’s FREERIDE E into a partnership that not only sees the 28 year old showing the unique ‘limitless’ philosophy of the machine but also indulging in some alternative projects such as a brand new video filmed in the UK with KTM Extreme Enduro star Jonny Walker.

“I think I was at the ISPO show earlier this year and I saw the FREERIDE E and got talking to Thomas (Kuttruf, PR Manager) at KTM and I thought it was really interesting,” MacAskill explained on the origins of his link with the factory. “He offered to send one over to me in Scotland – which was pretty awesome – but it has been a really busy summer for me so to get the time at home to be out riding was tricky. Actually seeing the bike … you can tell that KTM are not joking about; it is a proper, solid, hardwearing piece of engineering … and also a lot of fun. I really enjoyed it.” 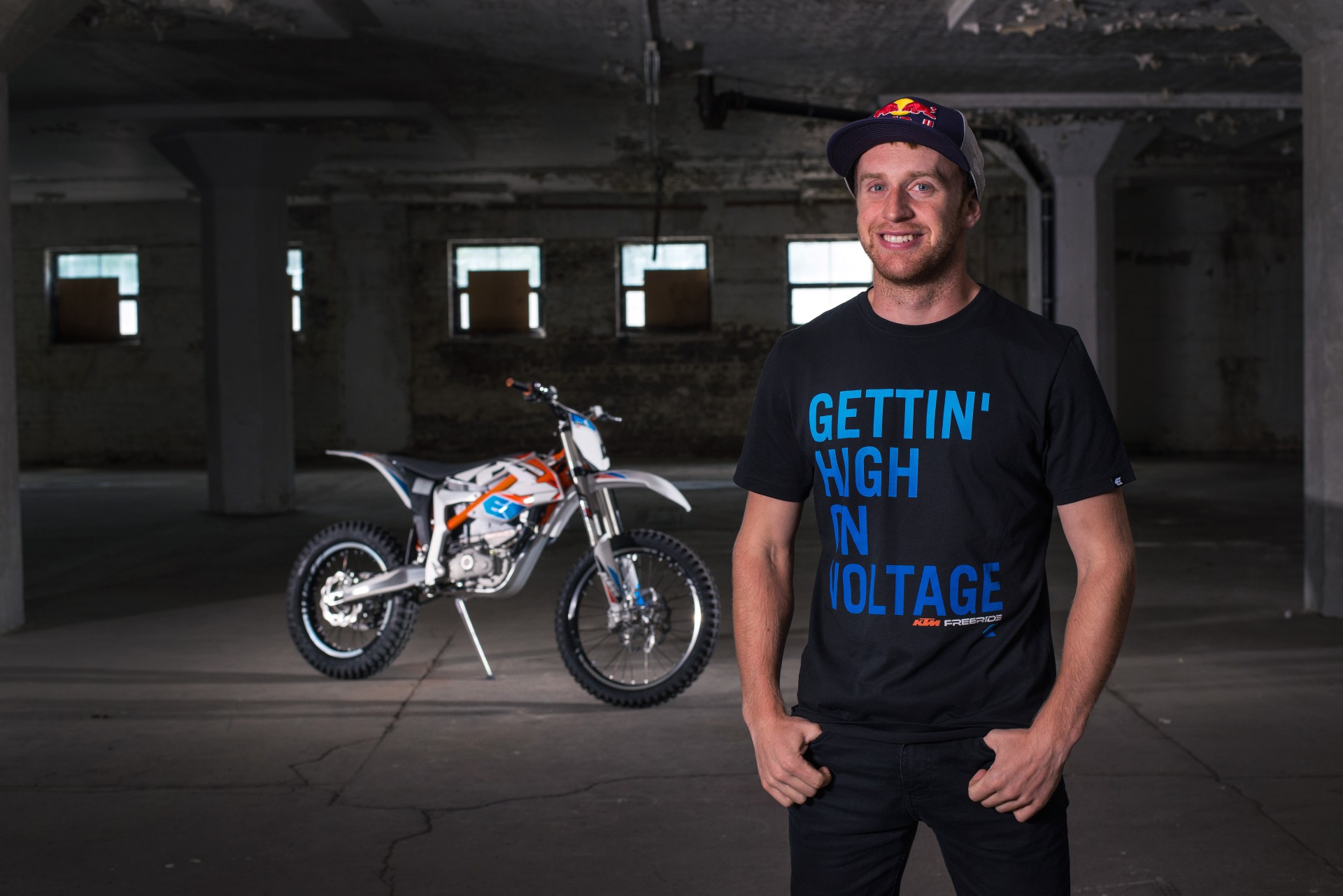 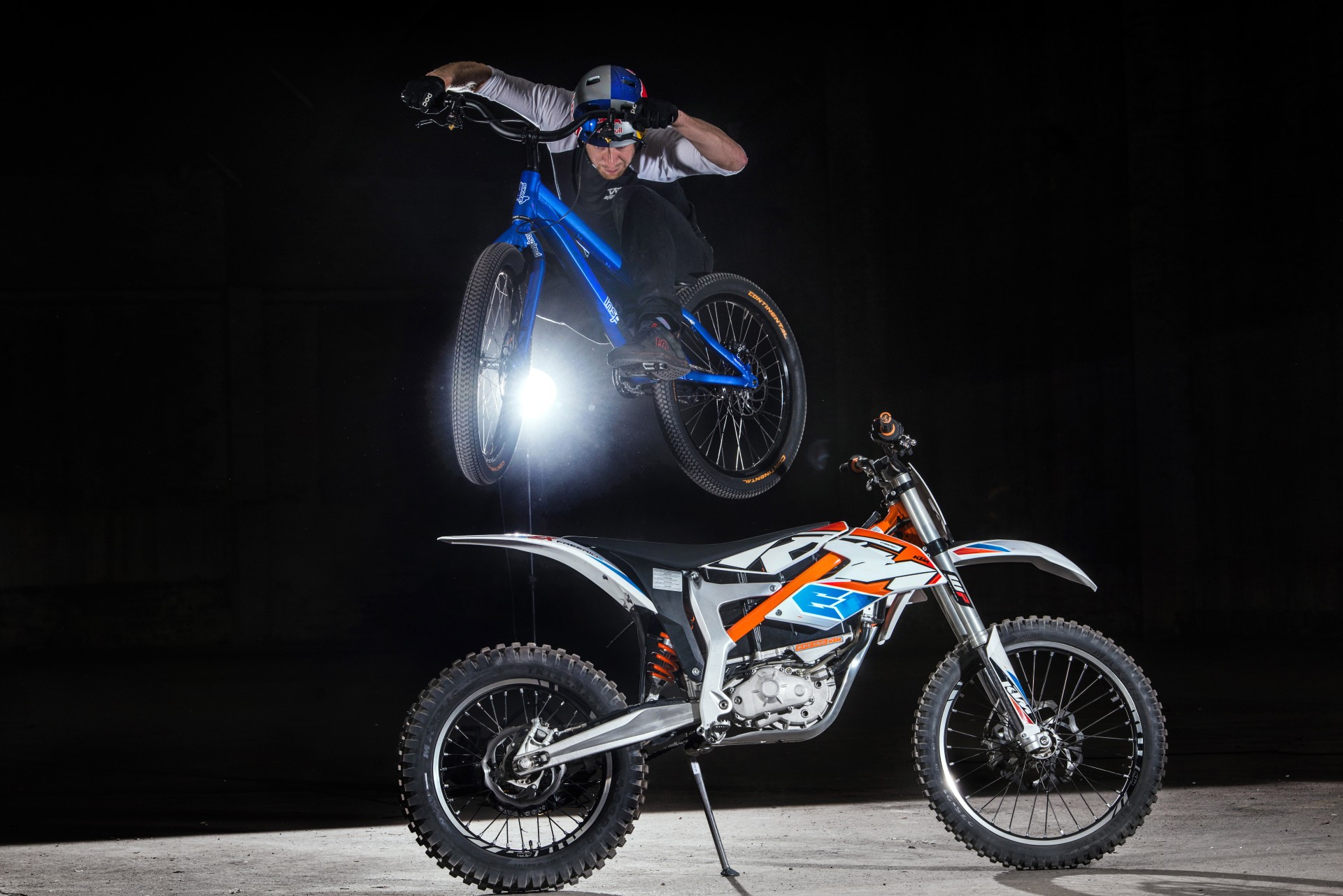 The ‘FREERIDE’ name has been given to a family of motorcycles (250cc and 350cc) in KTM and now three ‘E’ versions (FREERIDE E-SX, E-XC, E-SM). It is brilliantly appropriate for a group of products that aim to dissolve the traditional boundaries of motorcycling. For MacAskill and his superb range of videos that have involved scenes from an Argentinean ghost town to downtown Edinburgh to a children’s toy pen (watch the ´Imaginate´clip to understand) it is a natural fit. It can only be a matter of time before the FREERIDE is being bent into some impossible shapes, like the Red Bull man’s distinctive Trials cycle. “I still don’t have my wheelies dialled and that’s something I can do on all day on my mountain bike,” he said. “I’m just missing the practice. I need to spend some time falling off it first! Finding the limits.”

How have the cycling community and his close group of buddies back on the distant location of Skye reacted to his ‘powered’ defection? “I’ve had a really good response to being on a motorbike,” he comments. “The only ones I’ve ridden were Trials machines, so to get on something like the FREERIDE E was very different for me. The FREERIDE E opened my eyes a little bit as to what is out there.”

“For me, coming from the bicycle, I think there are more and more restrictions about where you can ride a motorbike whether its noise or environmental issues, so I can see the advantages,” he muses. “I was amazed how many of my friends back home knew about the bike or were excited to see it without me even mentioning it; there has been a real buzz about it and they have been calling me up to come over and see it. It opens up a completely different world. In the Alps, for the media demos at Saalbach, we’d pass groups of walkers at a slow pace and it was like we were going by on bicycles.” 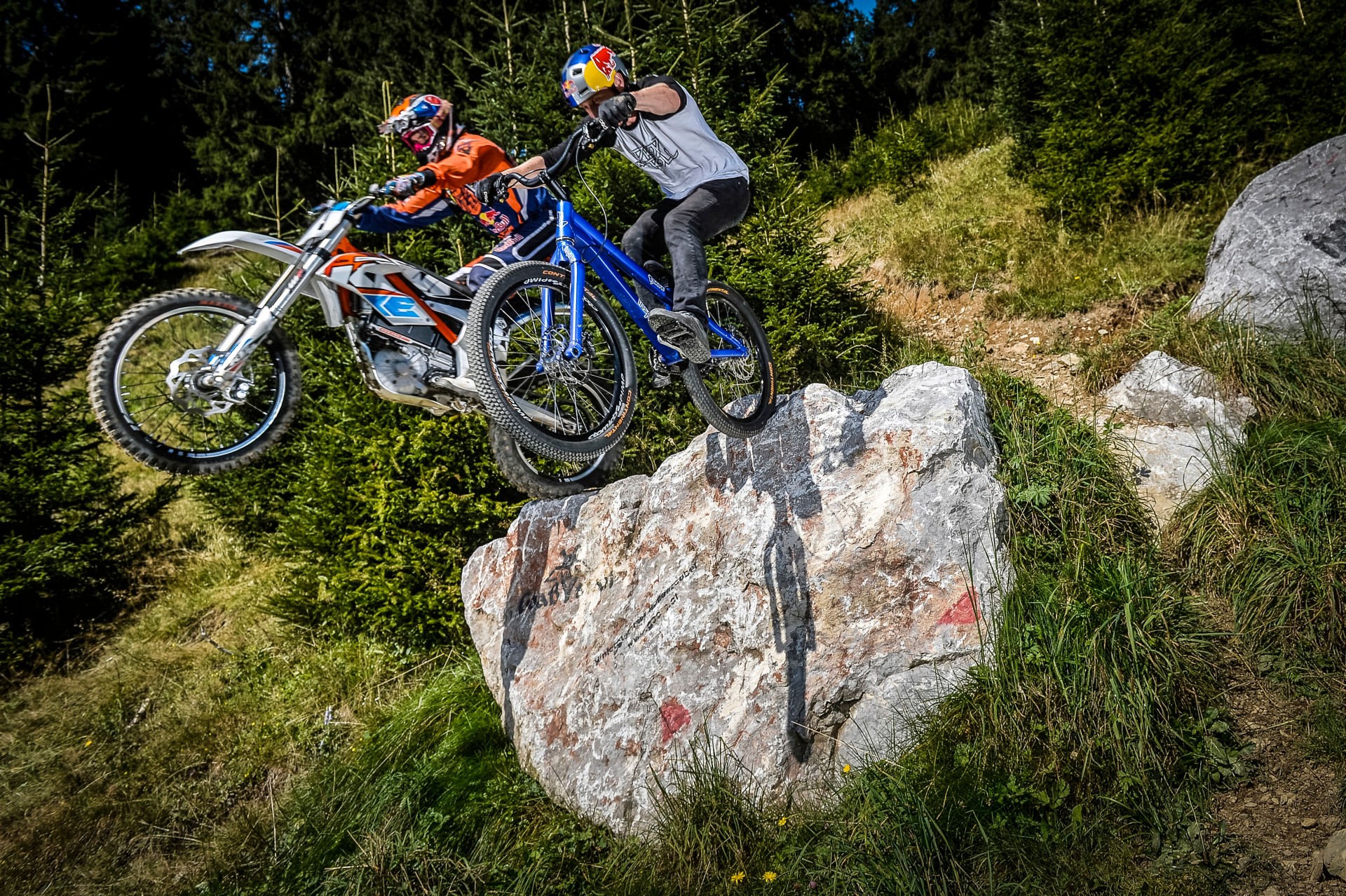 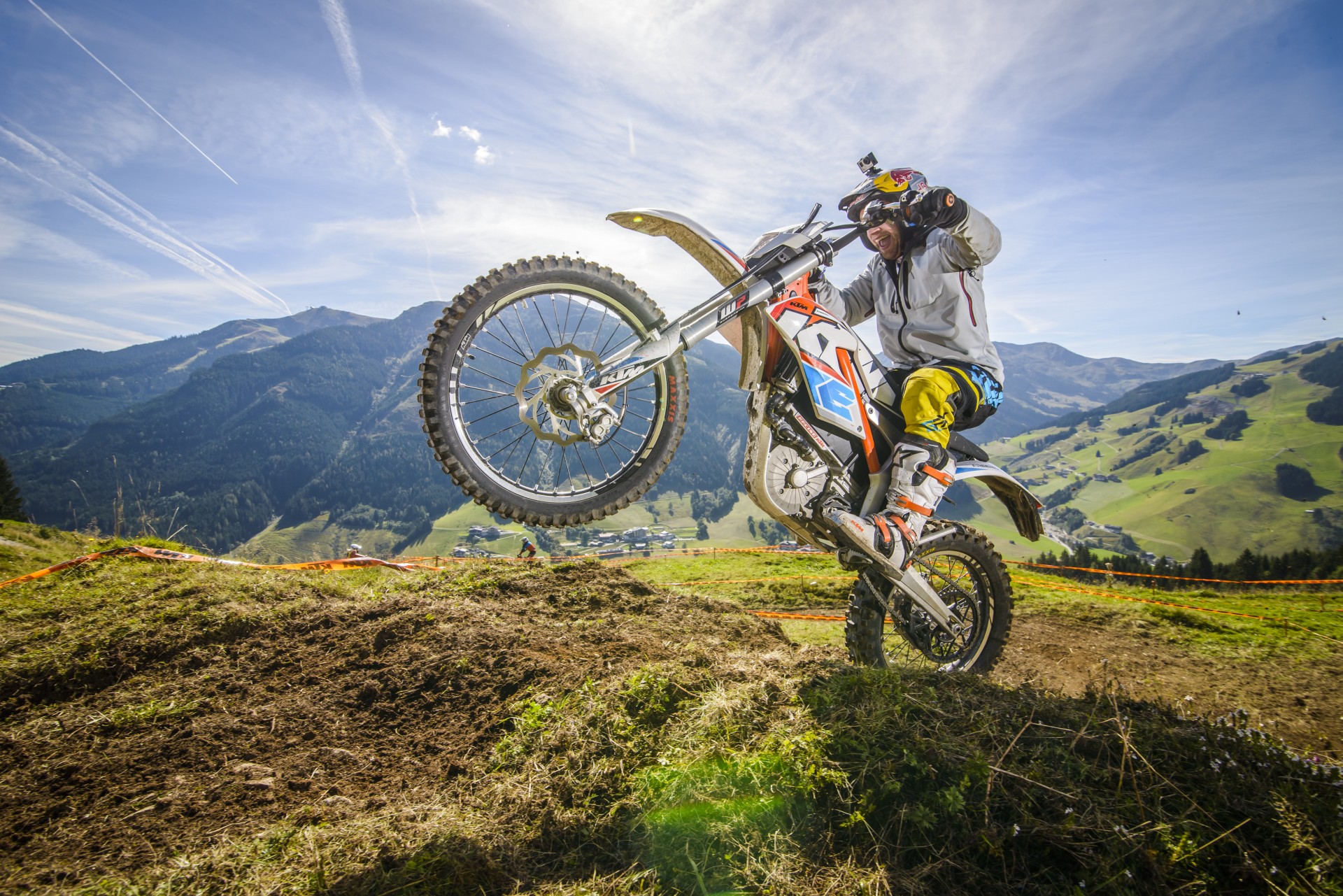 Asked if he had any scepticism about ‘going E’ it was clear that MacAskill had been converted by the FREERIDE E. “Over the last few years I think electric has been creeping into the bicycle world as well. Often when you see it then it hasn’t been done that well – just a battery and wires on a bike. As I said it (the FREERIDE E) is a proper piece of equipment and KTM have taken their time to bring it to the market.”

Even though he admitted he was lacking serious ‘Free’ time to conquer the idiosyncrasies of the ‘E’, MacAskill had enough confidence to film a very cool edit on the bikes through a disused power station in the UK for his latest video, recorded with Walker for company. “There was obviously a little bit of expectation!” he smiles. “I knew I needed some more riding but we came up with some ideas early on and a power station seemed right. We wanted to ride around and give the video some atmosphere. It became quite hard work to find a location because a lot of these places are still strictly controlled by health and safety, particularly in the UK. We found somewhere eventually and everybody on site was really cool. After an hour they just let Jonny and I get on with it. I had the best time. There are some tricks I still want to do on the bike but I haven’t managed them yet.” 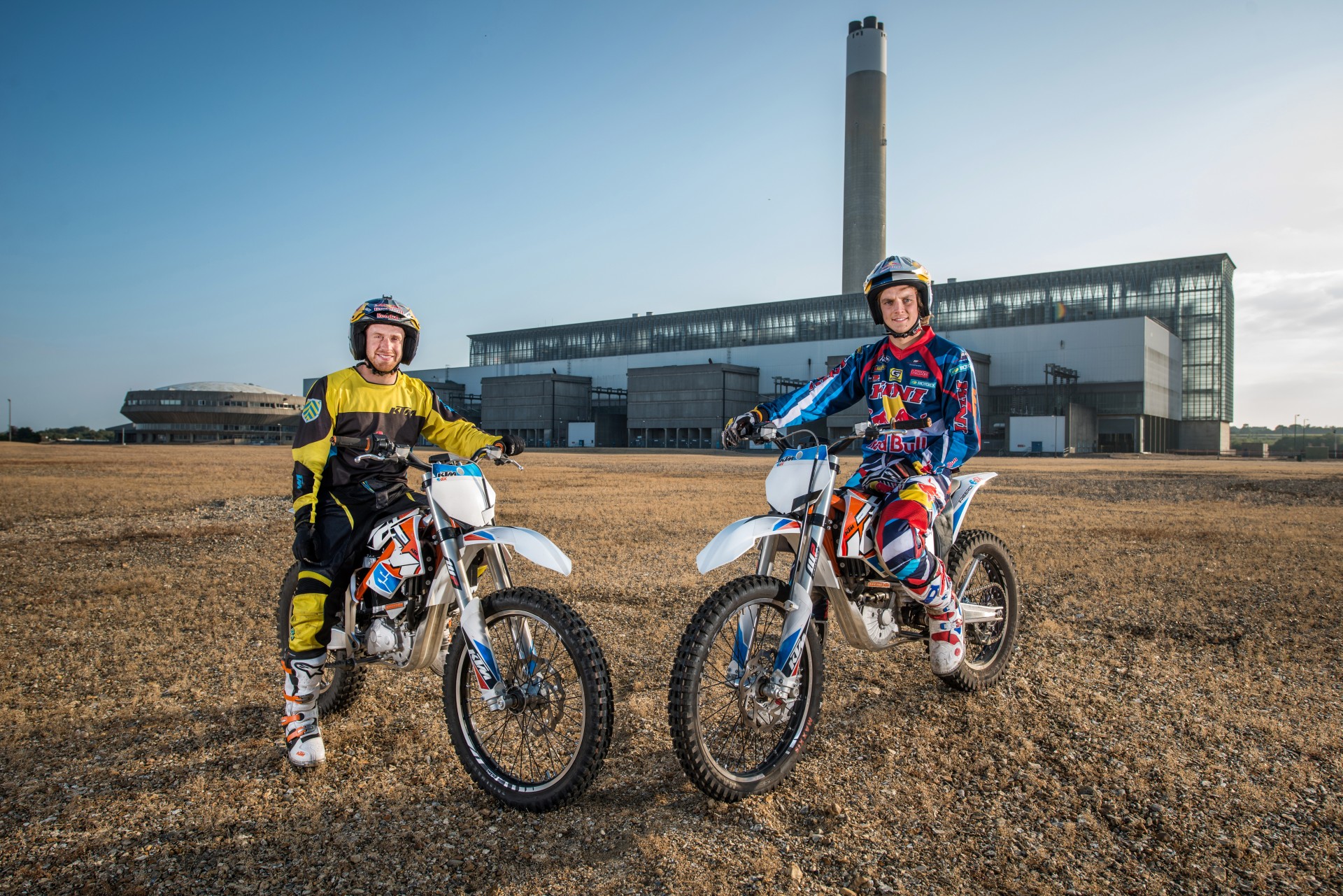 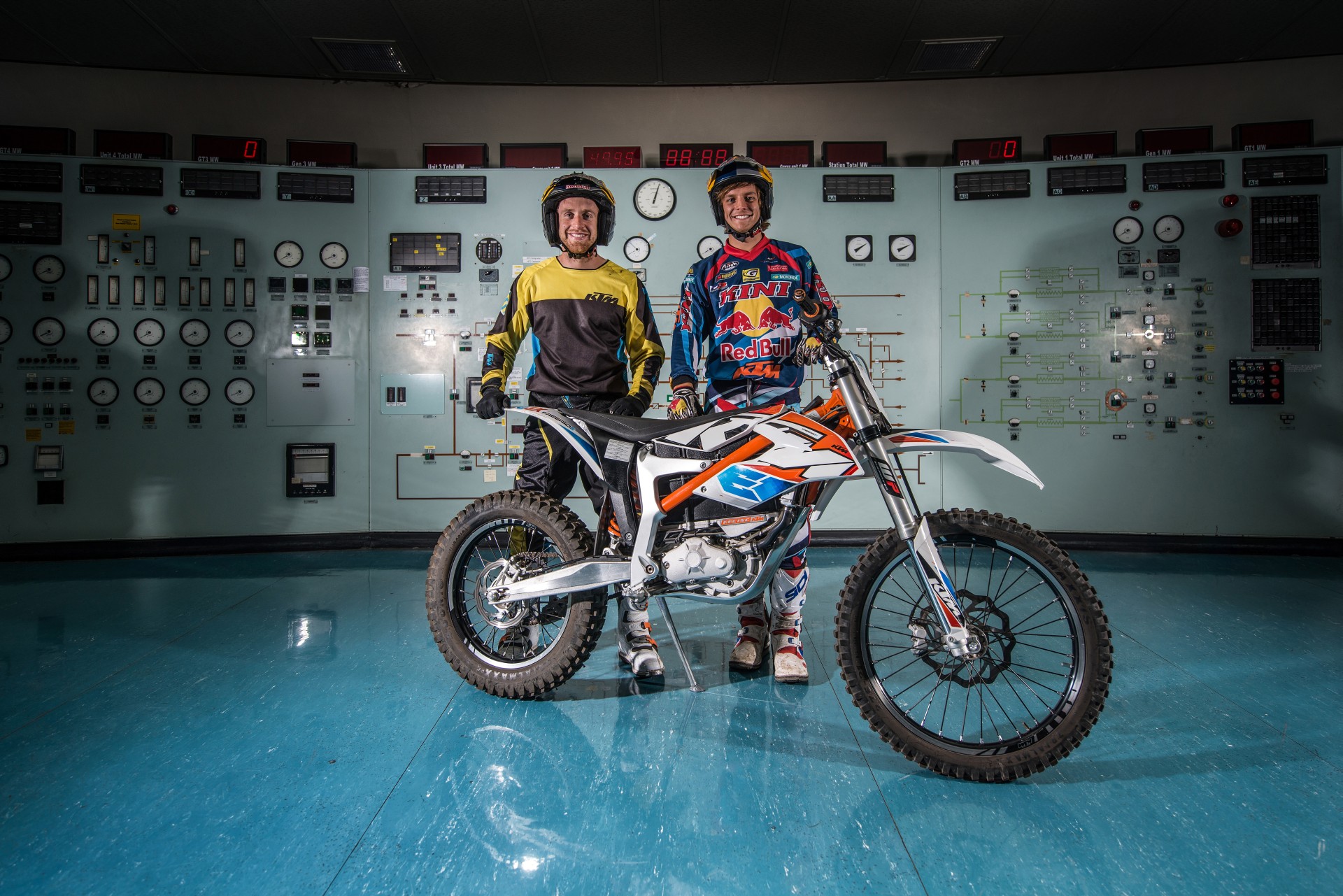 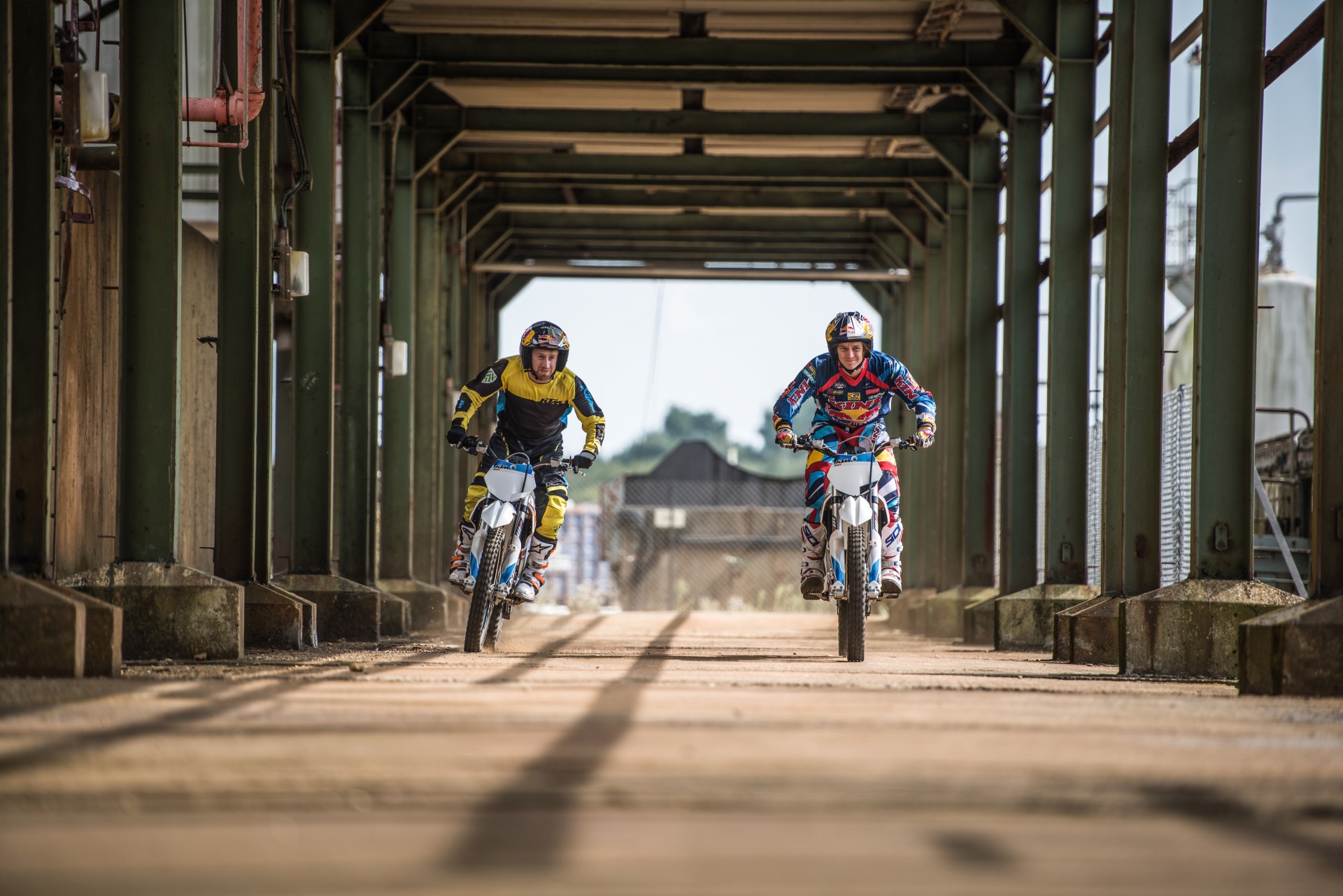 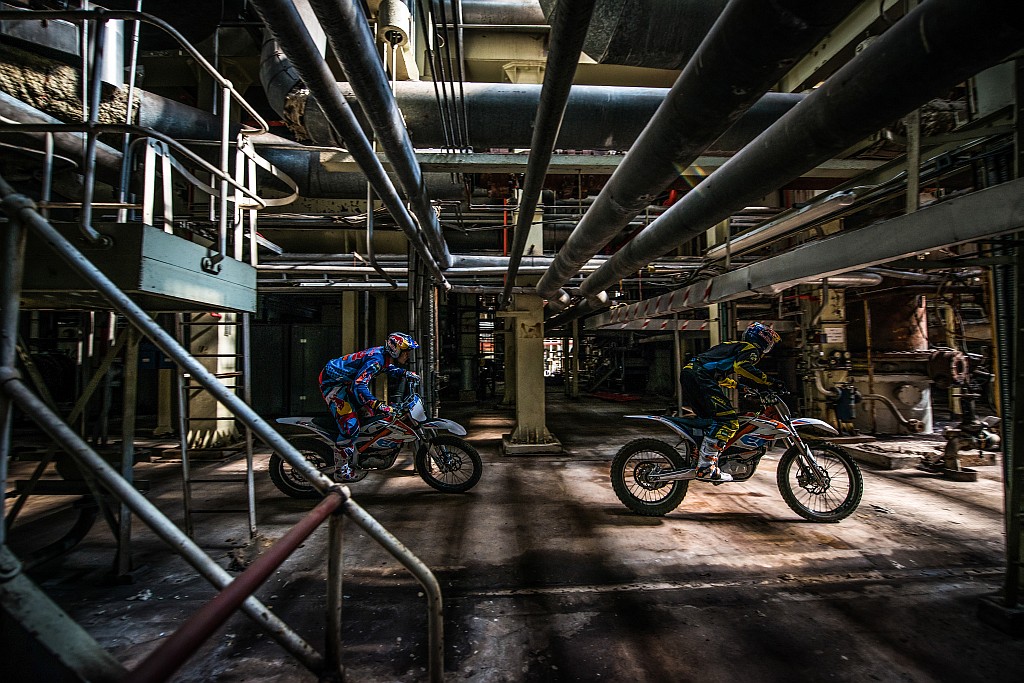 Anyone with a connection to the internet and a curiosity in seeing an individual performing feats that beggar belief will be familiar with MacAskill’s output on pedals. It is an amazing technique born through hours and hours of riding while growing up and bicycling with only music for company. With Danny hanging around INTERMOT all day we just couldn’t resist asking for advice, particularly for all the kids out there enraptured with his wizardry on their screens. 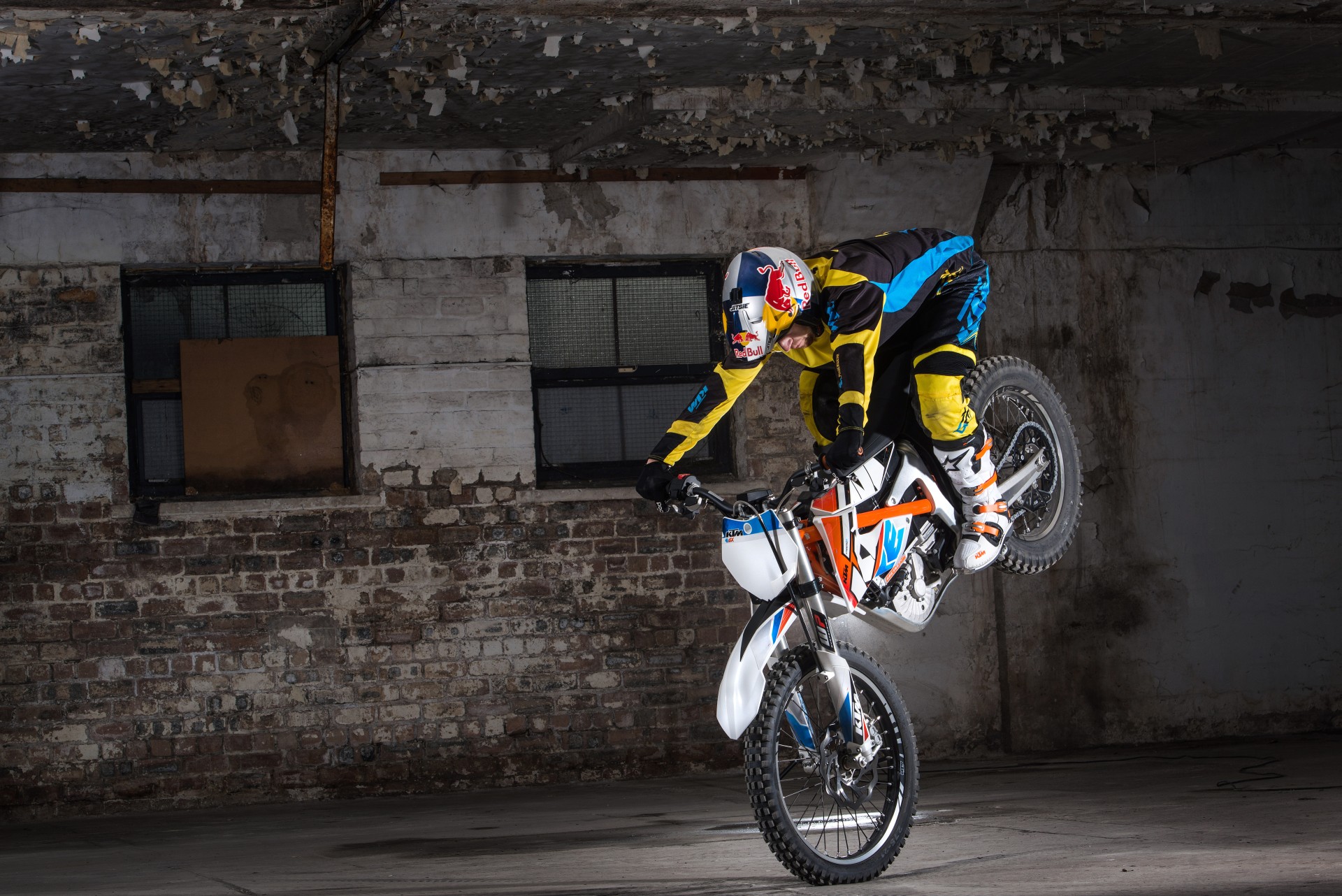 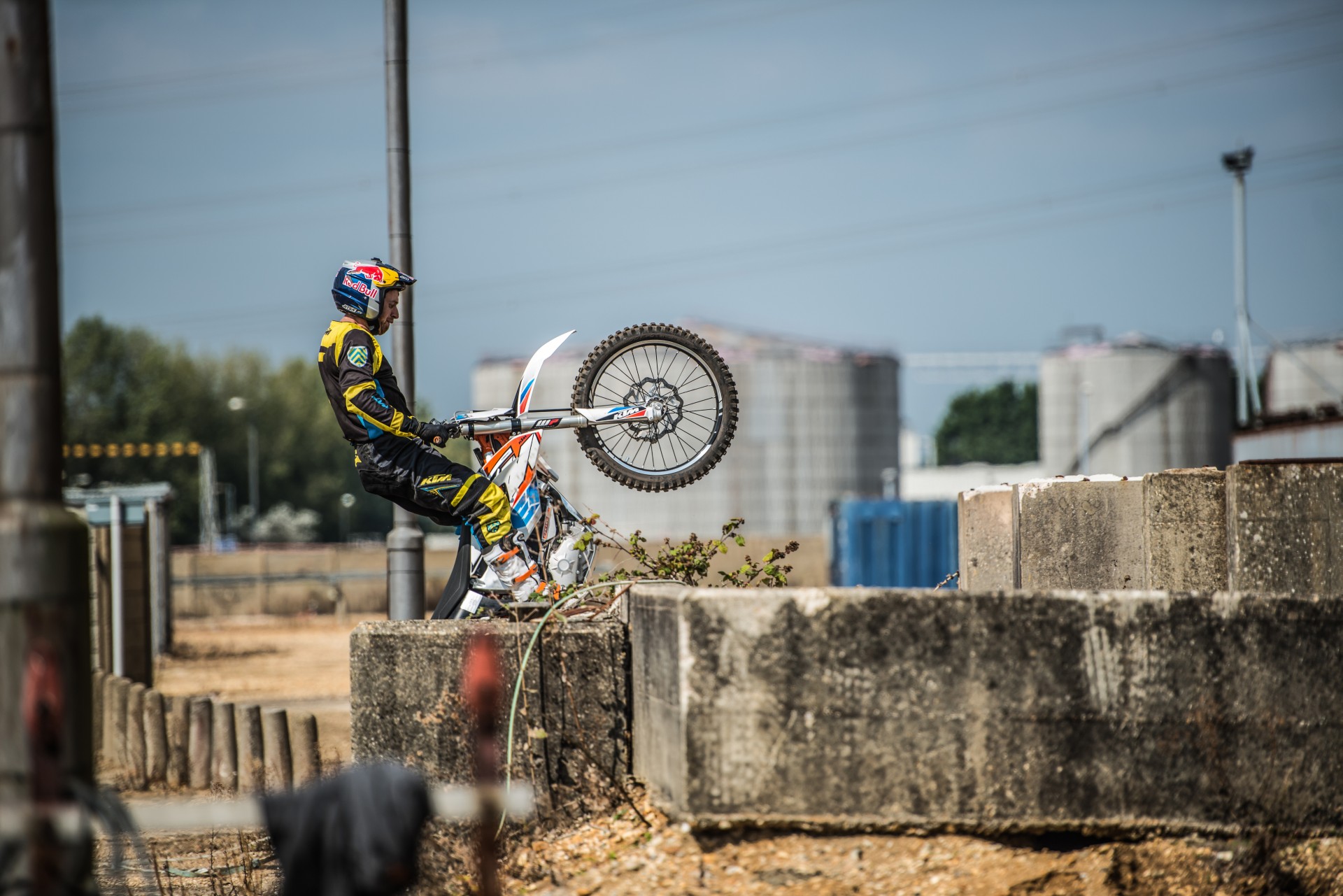 “Keep the enthusiasm,” he advises. “I have always ridden my bike for fun, ever since the beginning. I never really had any goals or aspirations. I just rode it every day because that’s what I loved doing. I was always of the belief when I was younger that if you are good enough at something then the right people will take notice.”

“When I was into my teens I was looking at the magazines thinking ‘well, I can do some of that stuff’ but I was living up in Skye in a remote part of the world and I didn’t have the opportunity to get into a scene as such,” he continues. “It was something I never sought after. I never approached sponsors but somebody took notice of what I was doing. Just ride all the time for fun; a simple tip I suppose!”

48 Responses to Interview of the Month: Danny MacAskill – Free spirit on FREERIDE E