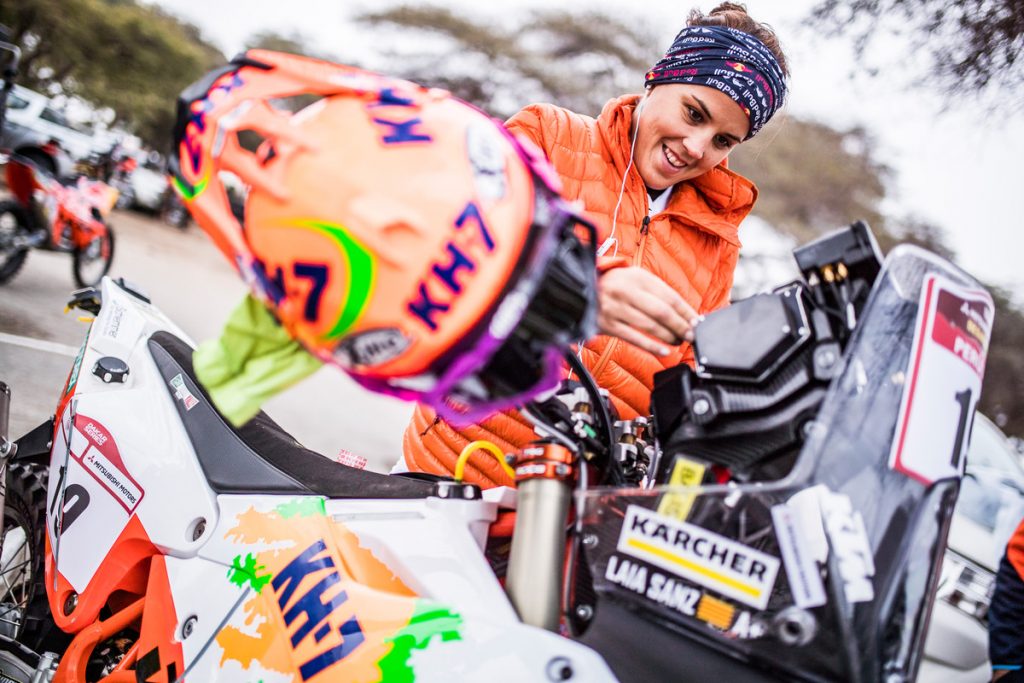 Interview of the Month: I worked really hard – Laia Sanz and the Dakar determination

Incredible talent, an incredible mindset, and incredible determination; that’s what we found when we talked to Laia Sanz. A Dakar hero in her own right, the Spanish ace has defied the stereotypes to become one of the most-respected rally racers in the world. 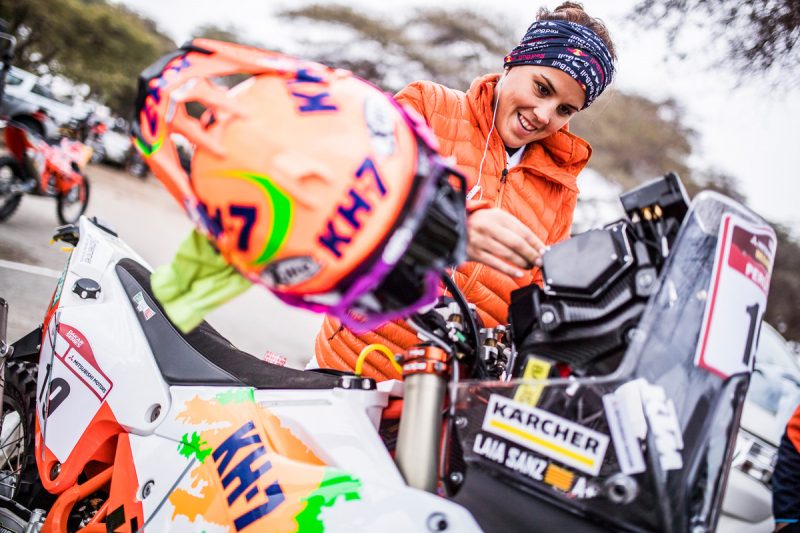 Dakar is tough, it’s grueling, it’s demanding – it requires excellent bike skills, and physical endurance whilst negotiating some of the most dangerous terrain in a motorcycle race. With wild extremes and navigation over 1000’s of kilometers from a piece of rolled up paper during the two weeks of the event, Dakar is the ultimate test for offroad riding skills.

KTM Factory Racing’s Laia Sanz is one of the only people to have finished every Dakar they’ve raced, that’s eight so far, and whilst being the top female competitor, she has enjoyed a number of top finishes within the top 10 and 15 in the overall standings. An outstanding result for any competitor. The five-time Enduro World Champion is always working hard, and is coming into the most important preparation time of the year for Dakar 2019 (the race highlight of the year), having raced some rallies and enduro events in recent months to keep her ticking over.

“Last year I did a hard training, I lost some weight. I was working hard in the gym, cycling, training a lot on the enduro bike and rally bike. I think in Dakar it’s not only one thing, you need to be really complete. Your head needs to be fine, you need to be in a good physical condition,” began Laia when asked what makes a good Dakar racer.

“Last year I had a trainer to work with me in every day training in the gym, but also to help me with the bikes and the van at home, so I can be more focused on training and rest a bit more. This means after training I don’t need to wash and maintain the bike – before I was doing all of this as well, which meant everything was always busy.”

“In the gym I’m doing strength, endurance, everything, some cycling, some skiing – I worked really hard last year and in June it’s time to start with the hard work again. I’ve kept training, but it’s time to step it up again. Between June and Dakar I have time to work hard, to lose a little weight and to be ready for Dakar – I cannot be at my best level during the whole season, because you become really tired. Dakar is the main race and I just want to be prepared for that.” 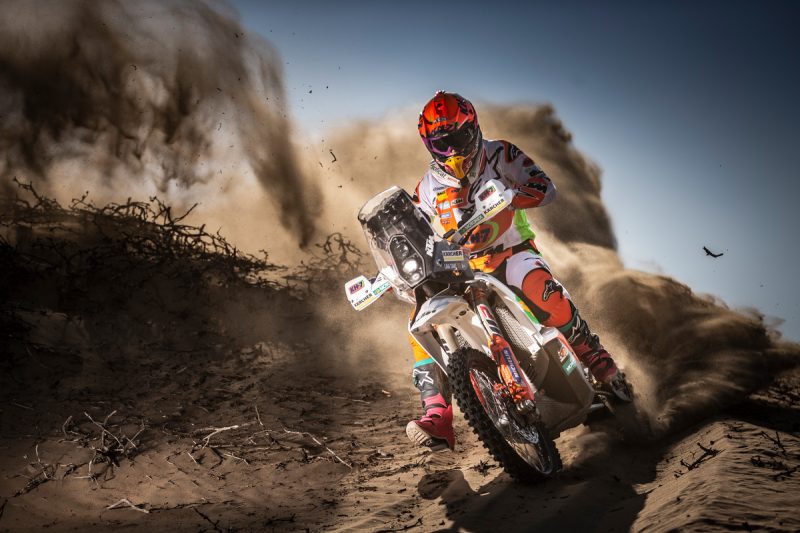 Last year Sanz was battling for another Enduro World Championship title, but it was difficult to switch between the heavier rally bike and her KTM 350 EXC-F when racing at such a competitive level. Now the KTM racer competes in national Spanish enduro events for fitness, especially as it provides around eight hours on the bike racing in Enduro2, which supports her training program for the rally events. She feels more focused and relaxed with this setup. So, what gets a young woman into bikes and then into rally racing – one of the most difficult racing disciplines of them all, with such high-risk factors and such a need for physical greatness? The answer is simple: A sheer love of bikes, and a passion for being the best she can be.

“I was four years old and in my first race I was six. Nobody in the family raced before me – my dad is really passionate about cars and bikes; he had trials bikes at home and my brother and I started with a small bike. I saw them all around and on the weekends they were going riding, and I wanted to go with them, but I was too young. Finally, I started riding at four and could go with them.”

“I think I arrived at this level because I worked really hard, but also because of my physicality. I’m not a small woman, I’m quite tall and strong and I’m lucky because of this as I have long legs and a big body. For me this helped a lot, for sure if I was a small girl on a rally bike it would be quite tough – this is a help, but I need to work hard. To be on a similar level as them (the men) I need to work more, I try to be fit, work hard and I think I have a lot of mental strength. I think that side of it comes with your personality and of course things in life make you learn can make you stronger – (the determination) it’s in my character, it’s something I was born with. I’m persistent, maybe even stubborn when it comes to my goals.” 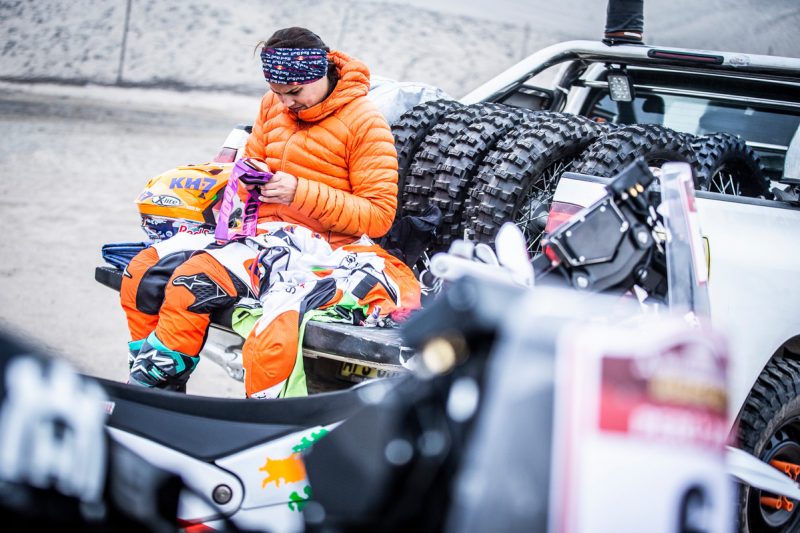 It is well documented that women don’t have the same strength, endurance or even lung capacity as men, but Laia’s technical skills that she honed on a trials bike previously (she was a world champion at this too) gave her a fantastic technique that ensures energy is not lost in difficult places on the rally bike. Sanz is also excellent at navigating with her calm, precise approach, which gives her an advantage over many of her competitors.

However, with the extreme cold, followed by the extreme heat, the altitude, the terrain, the long days, the lack of sleep, fatigue, it’s not easy for any Dakar racer. The mental challenge to get up at 3am and race those conditions day-in, day-out is one that every rider has to battle, whilst not losing concentration after hours on the bike – a moments lapse can be catastrophic. We asked the question: Do you ever wonder why you’re doing it?

“Sure, many days in Dakar you ask yourself what you are doing there, why. I could be at home doing a normal job that’s safer, where I don’t risk my life, but of course I also enjoy what I’m doing a lot. It’s a really good feeling when you get to the end, especially if the result is good, because all of the work you’re doing through the year and in your life is paying off, and it’s a really good feeling. In Dakar the months before are so intense with work, also with the logistics, preparing everything. I’m lucky I’m in the KTM Factory Racing Team as before I had to prepare everything myself, the tires, loading the crate, just with people that can help me. I appreciate everything and the work that goes into it.” 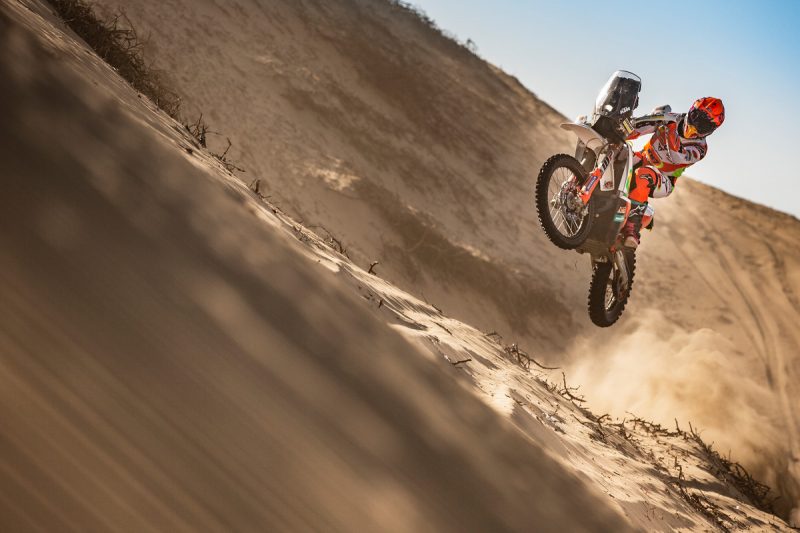 She’s an incredible woman, an ambassador for sport in general with a strong allegiance of fans and while it’s a cliché thing to say she’s a woman succeeding in a man’s world, Laia demonstrates and represents what can be achieved despite any physical disadvantages with enough grit and determination – I’m sure many of the hundreds of men she’s beaten in races would agree.

All focus and intensity is on the Dakar 2019 race, which begins on January 6 where Laia will aim for a great result aboard her KTM 450 RALLY factory machine.

58 Responses to Interview of the Month: I worked really hard – Laia Sanz and the Dakar determination