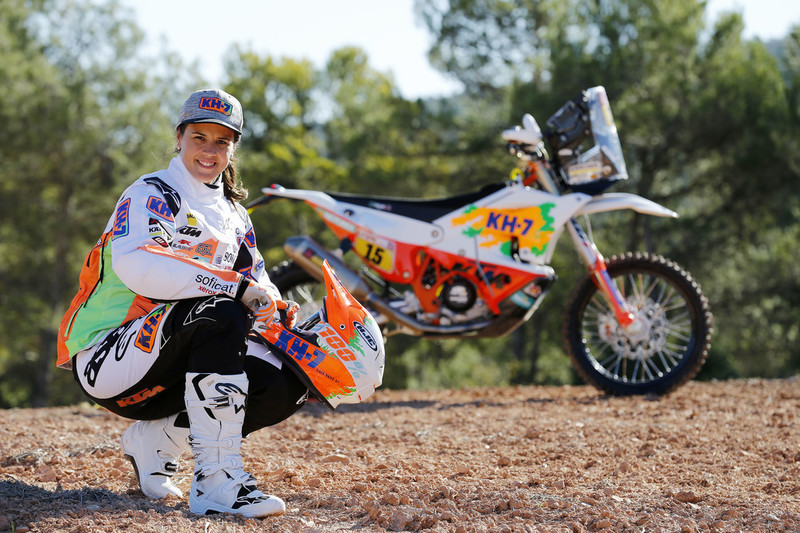 Interview of the Month: Laia Sanz – Dakar dreams and the challenges of the world’s toughest Rally

Now approaching its 40th year, the 10th to be held in South America, the Rally Dakar really is one of the toughest sporting events on the planet. More than 500 competitors will race for glory over 9,000 km of varied terrain through Peru, Bolivia and Argentina. One of those competitors is Laia Sanz. Multiple world champion in trials and enduro, the ‘Queen of the Desert’ will be starting her eighth Dakar on January 6. The KTM BLOG caught up with Laia as she travelled to Morocco for her final training camp before the Rally starts in just over one month’s time. 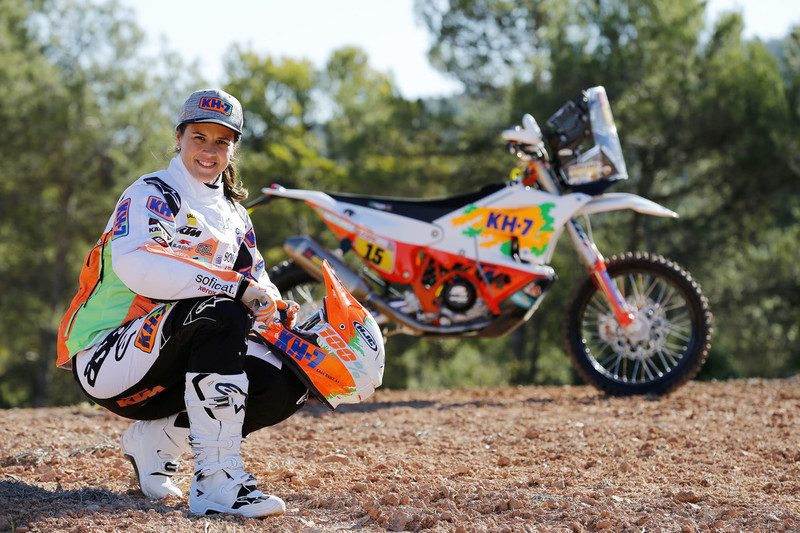 After an incredibly successful trial and enduro career, you moved to rally – was that always the goal from the beginning?
“Yeah it was. My dream was always to race the Dakar. I can remember as a child being so excited to watch the Dakar on television. We are lucky in Spain that the coverage of the race has always been excellent with an hour-long program every night. As a child it was magical to watch the riders race through such incredible landscapes. Despite my love and fascination for the event, I never thought I would actually get the chance to race there myself.”

Obviously, the race was still held in Africa back then, do you think it has lost anything with the move to South America?
“Although the move had to be made for safety reasons, I do think the race did lose some of it’s magic. The iconic finish at the Lac Rose will always be something I would like to experience. Maybe one day we will again. I have spoken to riders who have raced both locations and they say that although sometimes they miss Africa, South America is also beautiful and presents even more of a challenge. Yes, the safety is better in the South American countries, but it is also a tougher race. There are so many different kinds of terrain and we have to race at altitude too, which can be very demanding.”

How do you deal with that challenge? The race is one of the toughest sporting events in the world. In this final run up to the start, how do you prepare yourself?
“This year I have been riding a lot of enduro, which helps with bike fitness and speed. Luckily, I have been injury-free and I am feeling fitter and better prepared than ever before. In this final month my training routine changes a little – we work on stamina so the sessions become longer. My work in the gym changes a little too and I also try to get in some good long rides on my bicycle to improve my endurance. The stages in Bolivia climb quite high in the mountains and to prepare for that I like to go skiing whenever I can, it’s great for cardio and altitude training. I have just arrived in Morocco for our final team training session and not only will we try to get in some long rides on the bike, but we do a lot of navigation work too, which is going to be incredibly important this year I think.” 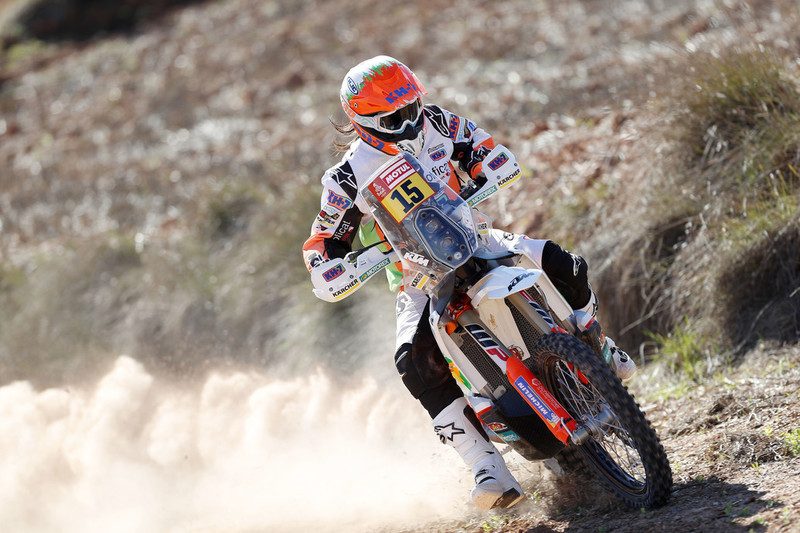 Talking about navigation, it’s one of your strong points, and looking at the first week’s stages in Peru accurate navigation is going to be vital!
“My navigation is good, but not perfect. Last year I made a couple of mistakes that luckily didn’t cost me too much time – the most important thing is to learn from those mistakes and not repeat them. Even after riding seven Dakars and other rallies around the world, I’m still learning, still gaining experience. You are right, navigation this year will be difficult but I think that can be an advantage for me. I know I’m not as strong as the other riders and can’t always ride as fast, but if I ride intelligently and stay consistent it enables me to be competitive with even the top guys. The Dakar is not all about overall speed it´s about staying focused, being mentally and physically prepared and ultimately finishing the race.”

How do you handle the ‘strong in the mind’ side of the Dakar – days of riding with hardly any contact with other people and the stress of physical and mental exhaustion?
“It’s definitely the hardest part of the Rally Dakar for me. Even after a couple of days you start to feel drained and the lack of sleep only adds to that. You wake up feeling tired and then have to ride again all day. Unlike other races, when you finish riding you have to prepare your roadbook for the following day and then attend the rider’s meeting before you get any rest, it becomes really difficult. The loneliness can get to you, but there is a good side to riding alone too, you experience so many beautiful landscapes and I love the feeling of freedom the Dakar gives. Bad days can really cause you to start questioning why you are there though, but come the finish it’s definitely worth it.”

Do you have any superstitions that you stick to when riding?
“There is one thing I can’t do without and that is a pendent of Saint Anthony that my grandmother gave me for my first Dakar. Saint Anthony is the patron saint of lost things and has kept me safe, so now, I wouldn’t ride without it.” 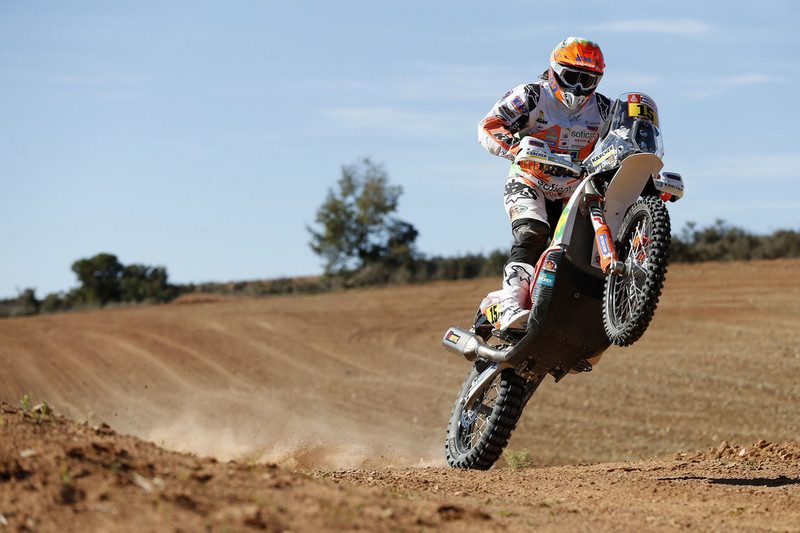 Looking at the route this year, do you think it will suit you?
“I think a lot of the riders have missed the sand over the last couple of years, but after a week in Peru everyone will be sick of it again (laughs). I’m lucky that I have had some experience riding there in 2012 and 2013 and for me it was the best part – more like the original Dakar in Africa. It’s going to be difficult and require good navigation, but I’m looking forward to it. The second week will be a lot harder for me. We have two marathon stages and it will be really hot in Argentina, that all comes after a week of hard riding so everyone will be very tired already.”

How do you handle the marathon stages, do you enjoy the challenge?
“I hate the marathon stages. I am not very good at the mechanical side so if something needs to be fixed on the bike, I am not so good at that. You don’t get the same quality of sleep as you do in the bivouac so they are even more tiring. The mental side is hard too because you don’t see your people at the end of the day, you don’t see your mechanic or the team and that’s tough. On the stage before, you have to ride a little more carefully so you don’t crash and damage the bike because if you break something it could be the end of the race.”

What would you say your goals are? Are you aiming for another top-10 finish?
“I don’t like to put too much pressure on myself. The level is so high now, there is a new generation of riders coming through that have incredible speed on the stages. There are more riders than ever with the capability of taking the win. Looking at the start list makes you think it will be very difficult to finish inside the top-30, but it’s not always like that. The Dakar requires so many different skills and it’s not just speed that takes you to the win. The last few years I have either been inside the top-15 or very close to it, so there is no reason why I can’t do it again. My expectations for this year have been boosted a little by the new bike too, it really suits me and my riding style.”

Tell us about the new KTM 450 RALLY, did you have much input into its development and where are the biggest improvements?
“I’m so happy riding the new bike, it felt so good In Morocco back in October at the OiLibya Rally. The team have done an amazing job because it really is better in all areas – it’s not only lighter and faster but it’s more stable and that makes such a difference on the stages. When you hit an unexpected hole or jump the bike always stays straight and that is such a big improvement. For me, I know I’m not as strong as some of the other guys in the team so to have a more nimble, lighter bike is perhaps even more important. Hopefully it can take me to the finish of another Dakar and to another good result … ” 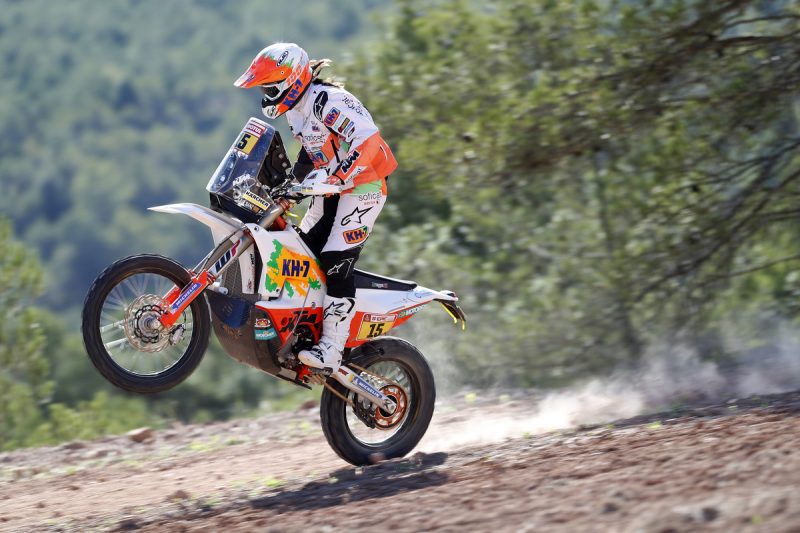 67 Responses to Interview of the Month: Laia Sanz – Dakar dreams and the challenges of the world’s toughest Rally