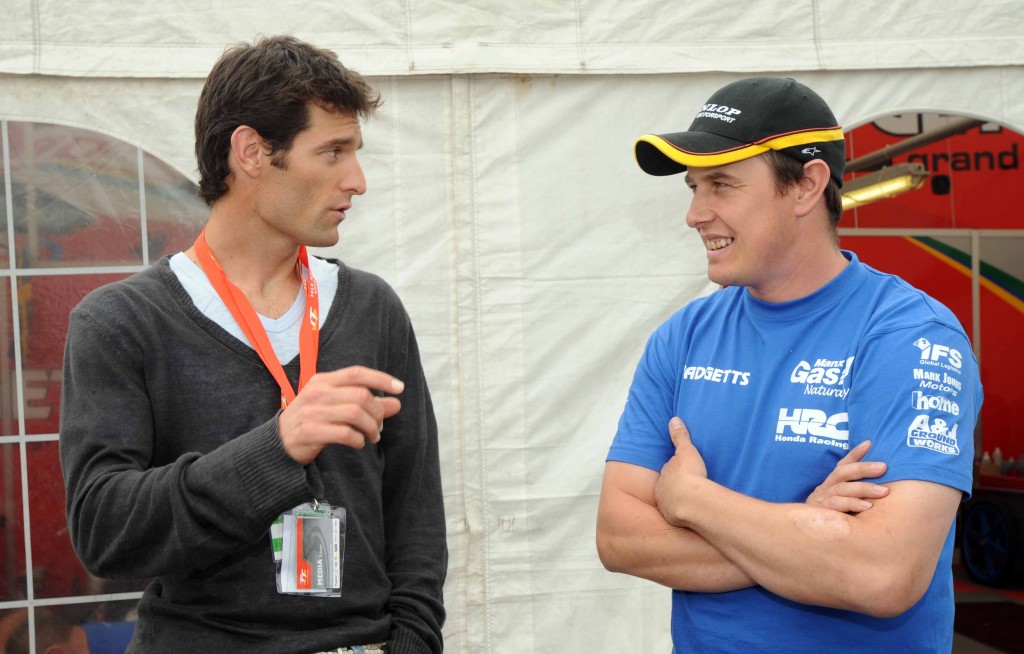 Interview of the Month: Mark Webber’s Day Off

Mark Webber is a busy man. As one of the fastest men on the planet on four wheels, his schedule is very demanding – even when he’s away from his Factory Porsche racing in the FIA World Endurance Championship for the LMP1 class.

Between races, testing, sponsorship commitments, philanthropy and a training regime that makes him more iron man than Tony Stark, Webber chooses his ‘days off’ carefully and intends to max them out; challenge himself but with the emphasis on outdoor fun. 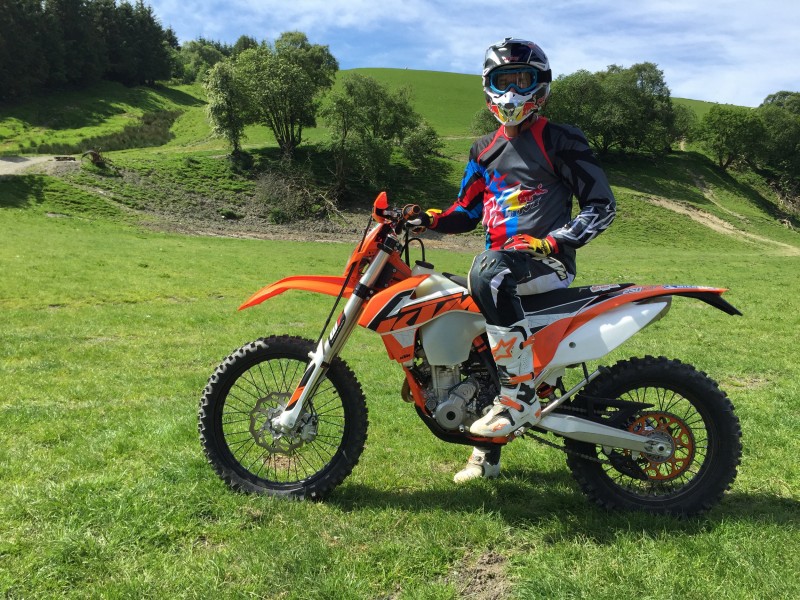 All clean but riding dirty. Webber about to shake off his Enduro rust at the start of the day. © Luke Brackenbury

The Aussie grew up knocking around on dirt bikes and has recently been trying to up his offroad game. With a KTM 350 EXC-F Six Days in the garage he was keen to chalk some more hours on, Mark called the KTM BLOG up for some recommendations on places to ride on a particular date – set firmly in stone. Unfortunately, there was nowhere close to his Buckinghamshire home open or suitable, so if he didn’t mind a bit of travel, Ady Smith’s Enduro School was suggested.

Officially supported by KTM UK, the former British Enduro and Supermoto champion runs a superb show and amongst the different sites he operates at, his venue near Llangollen in North Wales is probably one of the most stunning places to ride an Enduro bike in the United Kingdom. But a fair mission to get there …

“Can I land a helicopter there?” asks Mark on hearing our suggestion. Erm … sure. On a treasured day off, that will cut out a substantial drive in rental van and there’s nothing around for miles to hit with a chopper. Mark can use one of the school’s EXCs as well. The only downside with this plan is my failure to pluck up the courage and ask for a lift. Fail …

The weather is stunning in North Wales and I arrive before Mark. Then again I started at 5am and I’m regretting that jumbo service station sausage roll (well, a little) on the ride here. Ady proclaims it to be the best day so far of the season and, as we shoot the breeze, the quietness of the valley is soon broken by the sound of air being beat into submission by a helicopter. Quite a big one, at that. 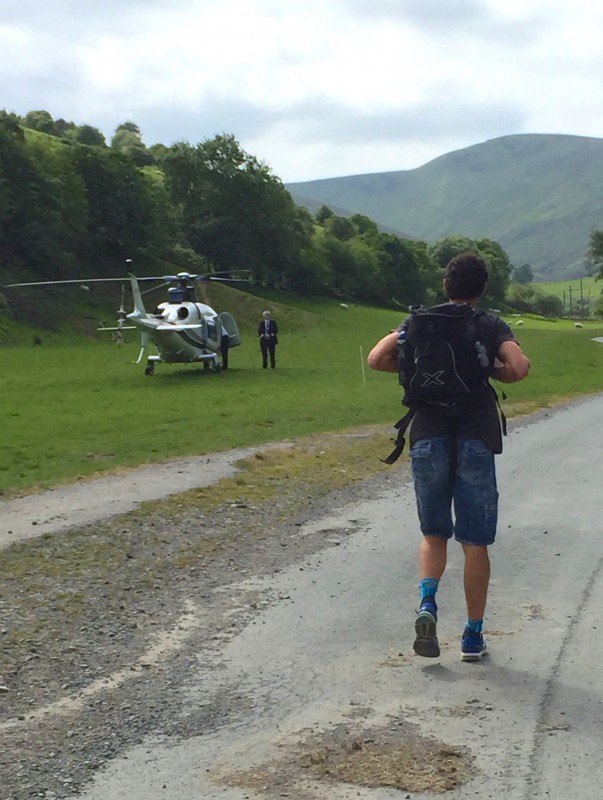 With a precious day off, a helicopter eliminates the chance of time lost being stuck in traffic. © Luke Brackenbury

I run into the ‘landing zone’ and (enthusiastically) wave my arms and (stupidly) strobe the flash on my iPhone to get the pilot’s attention. Then run away again while my hat is blown into a stream from the downdraft.

“Alright, mate? Sorry we’re a little late. We were in the wrong valley, but we found it. Anyway, I brought my sangers (sandwiches), like you said,” says Mark with a big smile and firm grip of my hand. And with that last sentence the helicopter-chartering (he does have a licence, but didn’t fly here) superstar becomes just a normal bloke who grew up on a farm and is here to ride some dirt bikes. 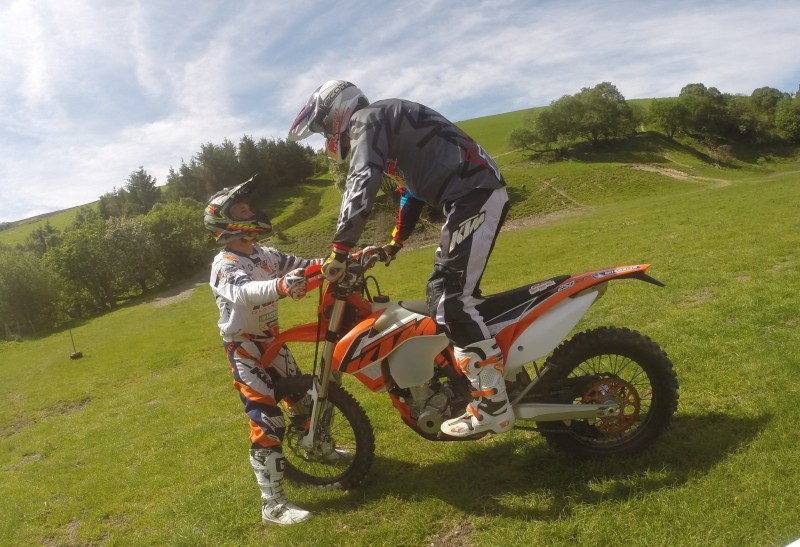 The scenery is epic, there’s no phone signal, a row of immaculately prepared EXCs await and there’s good stock of tea and coffee. Ady treats Mark like any other customer (that’s a good thing) and starts him out easy, lets him shake the rust off and sets about watching the nine-time F1 Grand Prix winner and giving him some tuition. Webber processes the feedback with computer-like efficiency and puts Ady’s drills into practice like an elite soldier. And, much like a trooper, he doesn’t leave a fallen man behind after picking me up off the floor following two crashes. 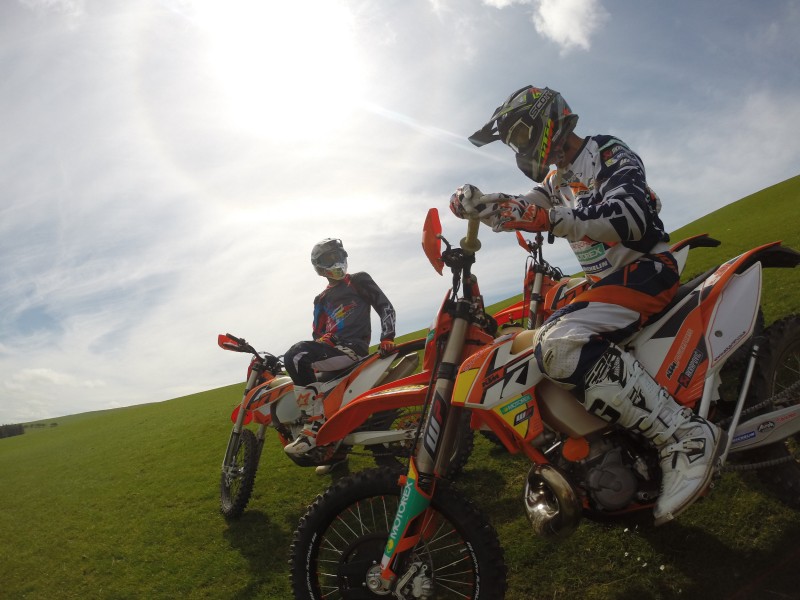 Not wanting to strain Mark’s back from picking me and my KTM 125 EXC Six Days off the deck anymore, I elect not to ride in the afternoon but take the opportunity to ask Mark some questions as he sat on a bike stand eating his sandwiches. 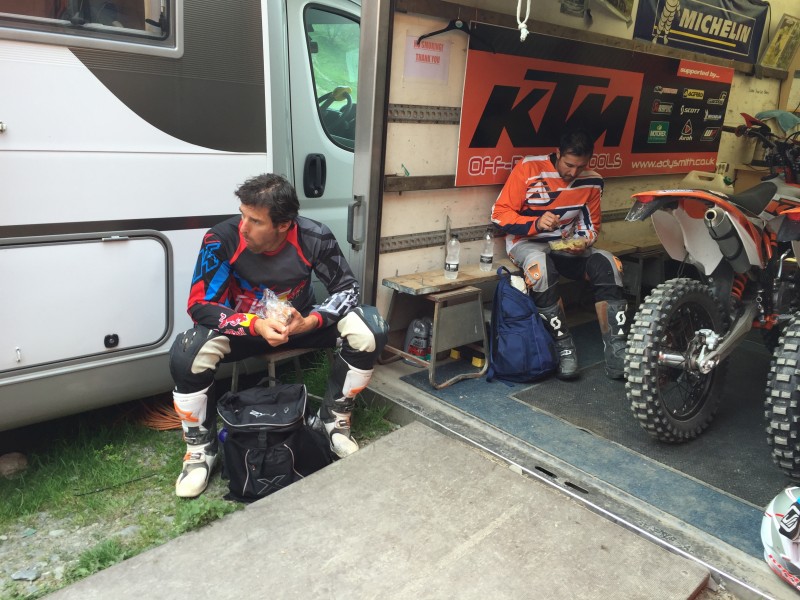 No need for a breather, but enjoying some sandwiches. © Luke Brackenbury

Describe your year so far …
“In WEC, we’ve had three races and have been leading two of them before one stopped us with a technical problem and the other with a penalty. But the Le Mans 24 hours was shit-hot for Porsche. My guys were in second place in a 1-2 for the team. So a bit of a mixed season and still looking to get on the top step.”

Outside of the job, what has been your best motorized moment of 2015?
“I’ve done some mega private trips, such as a Rally school in Finland, and some bike riding, including in Dubai with Heinz Kinigadner, David Coulthard and Sam Sunderland. But today with Ady I have to be up there. I’ve also been flying helicopter a lot – a AS350 B2. I don’t own it, but I’ve got my licence with around 120 hours flying time.”

What’s the appeal of a helicopter then?
“There’s a huge amount of discipline required to fly one; mentally, they’re a challenging machine. What I love about learning to fly them is nobody gives a shit who you are or what else you’ve done. If you have to improve, the instructors tell you. But there are so many dimensions involved – navigation, radio, learning the aircraft and maintenance. It’s really been a great thing for my mind.

I enjoy being in the sky, but we shouldn’t abuse it. We’re in a machine, after all; I don’t take the piss out of the opportunity to fly, as in looking to get adrenalin rush out of it.”

So your worst motorized moment of the year?
“Well, the opening WEC race – the 6 Hours of Silverstone. After qualifying on pole position I built up a lead by over 20 seconds but had to retire with a gearbox problem, which was really unusual as the cars last 24 hours with very few technical issues. So that was a hard one to take.” 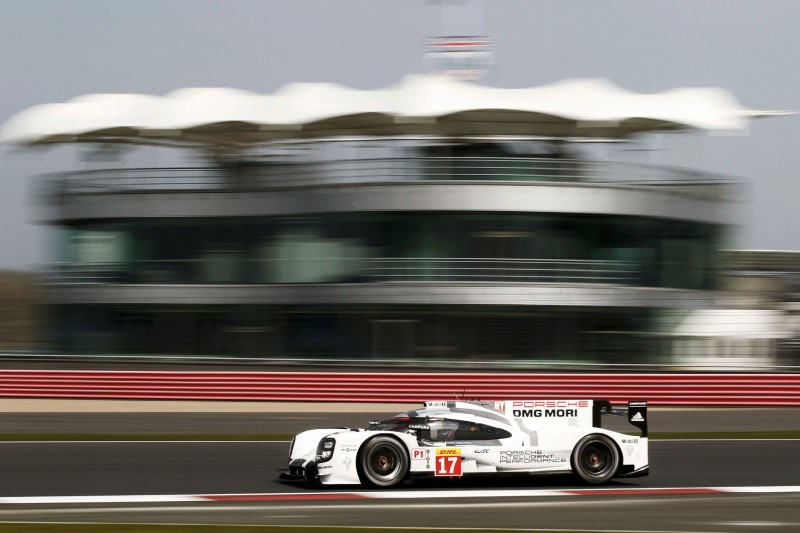 What are your all-time top three motor vehicle-based events – two or four wheel – that everyone must go and see at least once?
“1. Mugello MotoGP – when Valentino is riding. I went 3-4 years ago and it was just Italian chaos – and I mean that in a good way! The track itself is a sensation with so many good viewing opportunities and, to drive or ride, a real man’s circuit; it’s got all the ingredients for respect from the riders. But for the Italian fans and their love of the Italian riders and Italian bikes, they put on such a chaotic yet special event. Very enjoyable.

2. Goodwood Festival of Speed – I know its topical right now, but Lord March and his team put on an exceptional event and when they give it some two-wheel focus, like this year with so many world champions, there’s nothing else like it for the fans in terms of access to the riders, drivers and machines that can be seen up close.

Many events come under the ‘pain-in-the-arse’ bracket, but for us boys – the pros and ex-pros – we all talk afterwards and say how good the event was. It’s an absolute privilege to attend. None of us get paid to go by the Festival, just absolute respect to the event and Lord March for his efforts to pull everyone together.

There’s no fun police so that gives a natural feel about the whole event. They let it breath. Nobody is choking it down all the time. So if you want to do donuts on the lawn, go for it!

3. Isle of Man TT – I mean the sheer courage on display to ride those 37.7 miles at the pace they’re going. It’s incredibly exceptional. But I love how the old qualities of the event are still there but with modern bikes and approach from the riders. But not much else has changed; six laps for the senior, gravity fed fuel and of course the track.”

You’re mates with 23 times TT winner John McGuinness. Would you ever take a pillion lap with him around the Isle of Man?
“Erm … God. I think [long pause] it’s a possibility. We’d obviously have to have a decent chat beforehand. I 100% trust John and I’m sure he’d be fine. But outside of John’s ability, there’s the variables of a mechanical issue or animal running out, the consequences we know aren’t trivial. Certainly it would be a hell of an experience. A lap on the back of him going at even 50% would even be awesome. I’ve been on the back with Bayliss (Troy, three-time World Superbike Champion and MotoGP race winner) so I’ve had a snap shot of what those guys are capable of. I know what’s possible.” 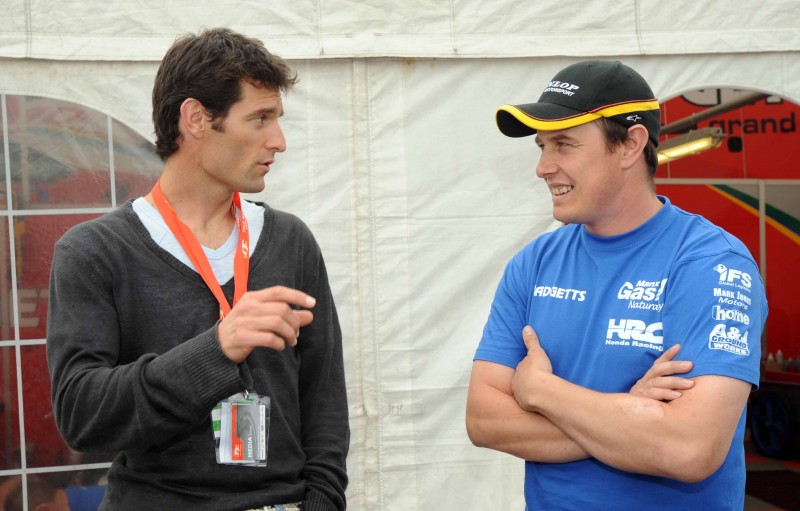 What was the biggest thing you’ve learned from Ady Smith?
“Just how much moving my body weight makes a difference to how the bike reacts. You get a small idea of this on a mountain bike, but coming from cars where you don’t move at all, the difference and importance it makes on a bike – from manipulating your fore and aft standing up of even where you are on the seat when braking and climbs. That was definitely biggest learning curve for me and the one with decent results.”

What’s the gnarliest offroad riding you’ve done?
“Definitely in the Dubai desert with Kini earlier this year. He had us climbing dunes and all sorts. Everything looks the same, but there’s lot of dangerous jumps and bumps that can take you off if you’ve got a lot of speed involved. If you’re out of condition, it’s not pretty. Riding in the sand is hard work and you’ve got to keep the momentum.”

You recently got a 350 EXC Six Days. What plans do you have for it?
“Well, I know a lot of professional riders from on and offroad that I can go riding with who have some great routes. But the trouble is they always want passes for the British Grand Prix [laughs] but we help each other out.

After 20 years sitting in a car, I get to work different muscles than I usually do and I’m still massively green for long days on the bike. I love challenging myself riding and push my limits. I’m not massively into going super quick, but I like hard riding – stuff that’s technically quite draining. I’m trying to get as much tuition as possible to keep improving. Basically I’m still trying to learn what the bike can take and I’m riding 2/10 what it can take, but the fun will be trying to get to the envelope of its capabilities.

But another part of riding Enduro is the views and backdrops you can get. A different way of seeing the world. I love riding out with some mates, work a bit of a sweat up and have a beer at the end of it with everyone having a safe day.”

Mark is back in WEC action on August 30 for the 6 Hours of Nürburgring and has recently released his long-awaited auto-biography ‘Aussie Grit’.

59 Responses to Interview of the Month: Mark Webber’s Day Off