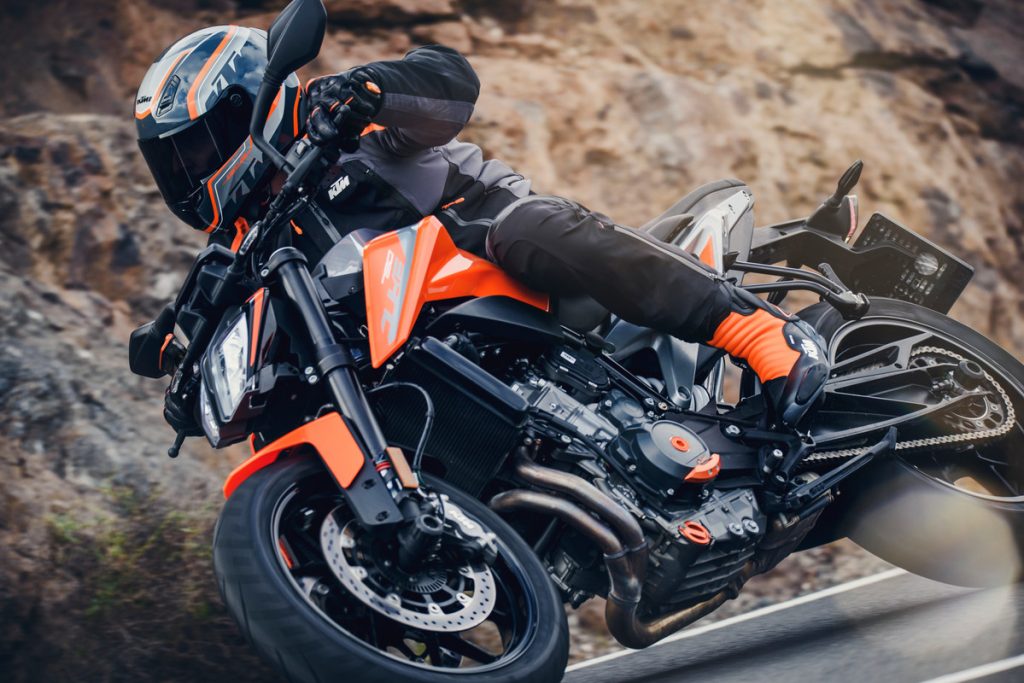 Product Management are a department within KTM tasked with the difficult responsibility of juggling all the subdivisions within KTM – Marketing, Sales, Production, R&D, Kiska Design, KTM PowerParts … Using their collective experience of motorcycling, engineering and customer behavior, their purpose is to make sure that new or updated KTM products are introduced to the market in a way that satisfies the core values of KTM, hit the initial concept target and excel the expectations of the end user. Managing this mammoth myriad of motorcycle must-haves for the exciting new KTM 790 DUKE was the task of Adriaan Sinke, so the KTM BLOG grabbed a chat with him.

On the verge of the international media launch for the new KTM 790 DUKE, a bike that pitches KTM into a fresh fight by entering a new segment – the incredibly competitive middle weight naked class – with an all-new 799cc parallel twin engine, Dutchman Adriaan Sinke, Senior Product Manager (Mid-Range), seems incredibly happy and calm. 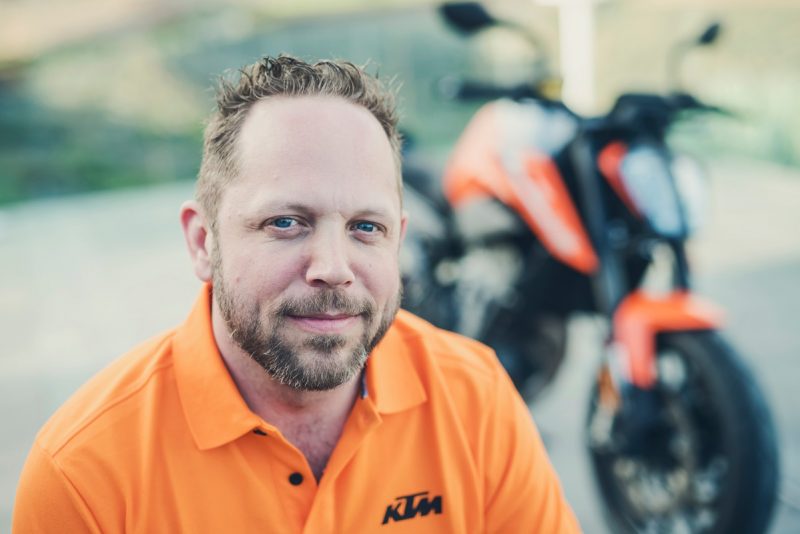 In the first week of March, 75 journalists from around the world came to Gran Canaria to put this much-anticipated bike through its paces – arguably the most significant street machine to introduce KTM to a new audience of riders since the introduction of the KTM 125 DUKE in 2011.

Sat in the lobby of the Sheraton Hotel, 41-year old Sinke has spent the last days making sure the riding route – some 180 km of incredible winding roads – provides a broad representation of the many situations KTM expects KTM 790 DUKE owners to challenge its 105 hp, agile chassis and all-day usability to.

“That’s the reason I’m smiling,” quips Sinke as we meet after breakfast. “The combination of the roads on this island, the usually sunny weather and just how good this bike is makes me happy and confident that the media – and riders – are really going to enjoy this new DUKE.” 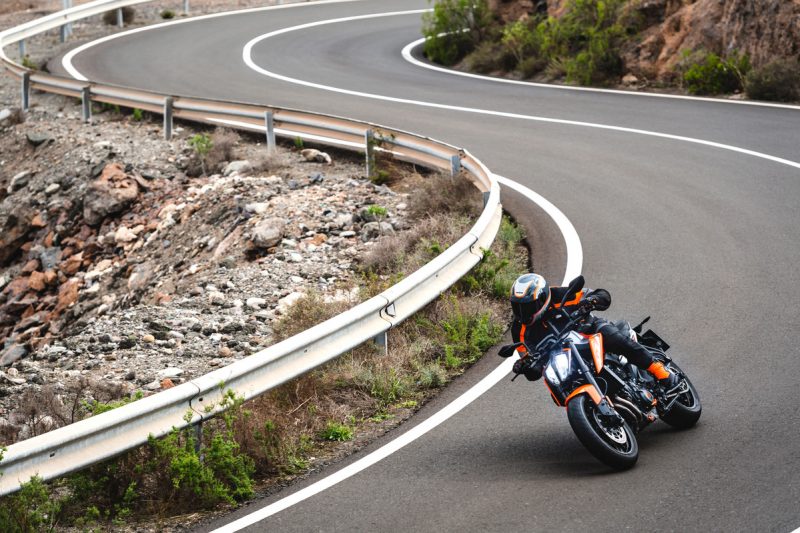 The sound of a new LC8c engine firing up outside the hotel immediately brings the conversation to engines. Powering KTM into the street market in 1994 was the KTM LC4 single-cylinder engine, housed within the original KTM 620 DUKE. Multi-cylinder Mattighofen engines on asphalt only followed in 2003 with the V-twin LC8 engine, introduced with the KTM 950 ADVENTURE. During the course of time, both powerplants have evolved hugely, through many capacity sizes, engineering excellence and through exploiting new technologies. So why now has KTM built a new engine?

“There are many reasons for this,” Sinke replies. “But mainly to satisfy a need in KTM’s existing street line-up to bridge the gap between 690 LC4 single and 1290 LC8 twin; completing a DUKE capacity ladder and now giving all riders a KTM option in the highly competitive naked middleweight segment.”

“For this capacity, a parallel twin offered the best packaging solution, in terms of its compact and narrow size. We call it LC8c – which means ‘Liquid cooled 8-valve compact’ and no – it isn’t just two KTM 390 DUKE engines combined! This is an all-new engine that brings together experience from all KTM engine types – even from offroad. Calling it a 790 when it’s actually a 799cc just fits in with the brand naming logic.”

Ah … makes sense! In the past, we’ve seen everything under 950cc powered by a single cylinder, so does the LC8c mean the end for the LC4 single-cylinder engine? Sinke is quick to reply:

“Although the new development is a twin-cylinder, the single-cylinder engine which powers the KTM 690 DUKE will continue. The LC4 drivetrain will remain untouched as a platform and will continue to be used and further developed by KTM in the future as a brand within a brand. Aside from the packaging and maintenance benefits, for those who have experienced the unique LC4 punch – including the massive refinement to the latest generation KTM 690 DUKE engine – they’ll understand why we have to keep this engine.” 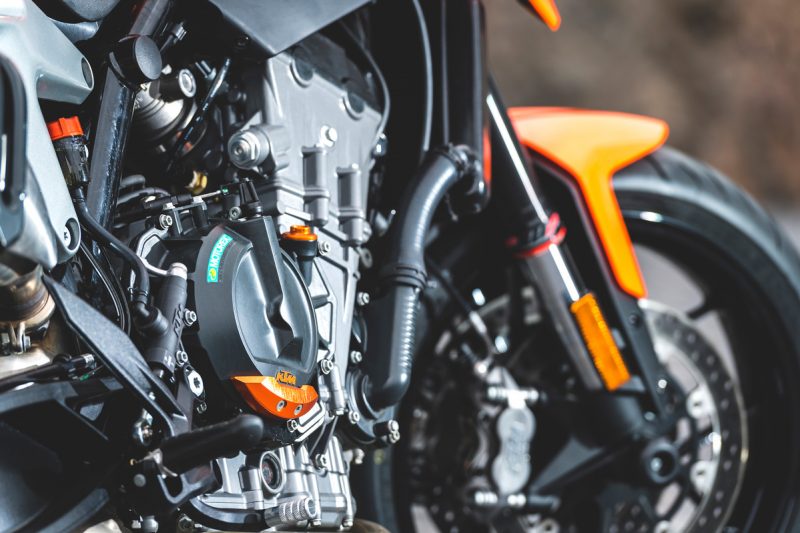 An all-new bike offered up many advantages and opportunities for new directions in terms of chassis design and engineering, the result seeing the KTM 790 DUKE sporting a new style of steel chassis then we’ve seen before from the Austrian brand.

“Since we started with a blank sheet of paper with the KTM 790 DUKE, we could make anything we wanted,” Sinke explains. “The target was to be as compact and light as we could, so to help achieve this we use the engine as a stressed member of the chassis, reducing weight from the chassis. But both the engine and chassis were developed simultaneously and together.” 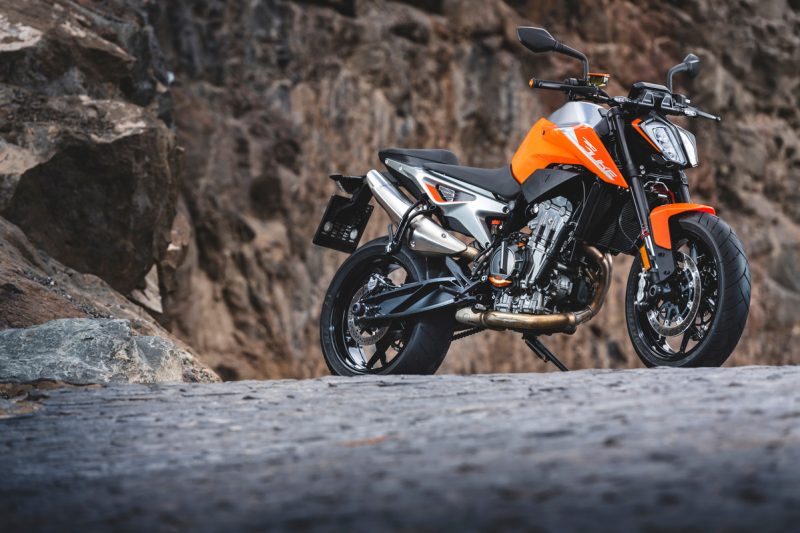 The middleweight naked bike class is arguably the most competitive right now in terms of sales and with all of the major manufacturers offering options. So, who does KTM see the KTM 790 DUKE standing toe-to-toe with?

“It depends on many reasons,” says Adriaan. “The rider’s budget, preference to engine type, brand loyalty, image, among others. But KTM does not build bikes to rival a particular model but to create sportmotorcycles with an identity of their own and a unique riding experience in the READY TO RACE way. But of course, the KTM 790 DUKE will no doubt be compared to a wide range of bikes in the segment. More importantly, this will be a motorcycle that can also rival more powerful bikes in terms of agility and fun.”

We can’t argue with his ability to avoid a direct question with a well-constructed answer. In that case, we ask who he thinks is going to be the typical customer for this bike?

“Now that’s the hardest question,” Sinke replies. “Because we really believe there won’t be a typical 790 rider. It is a typical KTM, so it is a very sporty proposition in this segment, but we’re also going to see plenty of people for whom this will be their only mode of transport, some will come up through the power and capacity ranks, some coming down in size and performance. We know it will be toured, commuted on, used on track. A very important group are the riders who have been in the midclass naked segment for a while and who plan to stay there. For this group in particular it was critical to find the essence of what makes a performance naked bike. There’s definitely a very strong demand for bikes in this segment and riders who will just about point them at anything. So, it was a challenge for our engineers and designers.”

“But because of this widespread need, we’ve gone for unadjustable suspension for simplicity. It’s still high-quality WP but designed to cope with this wide range of riders and uses. Another example of trying to appease this wide audience is the seat height. At 825 mm, it is already sufficient for most riders because of the narrow deign of the seat and tank, meaning legs have a more direct route to the ground. But this can be lowered further with KTM PowerParts to 805 mm with an optional seat or even further to 780 mm when this is combined with the low chassis kit.” 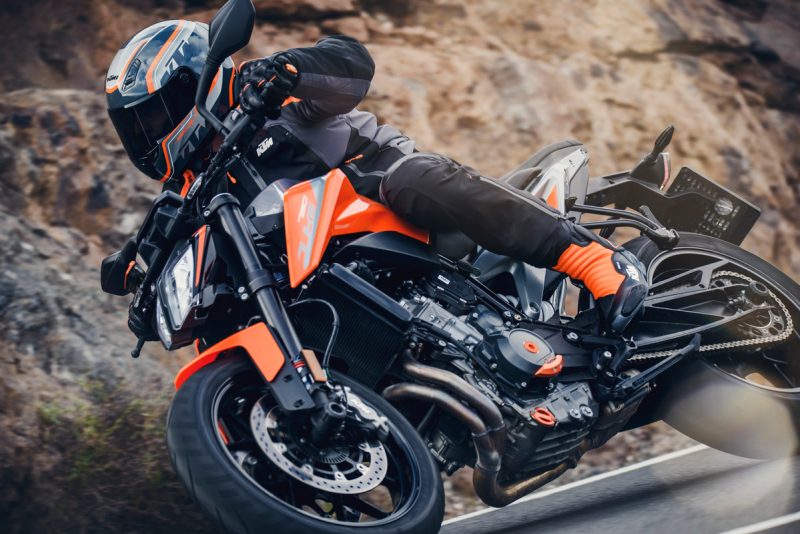 Despites its hardcore image, at the moment KTM has no plans for an “R” version but Sinke remains candid on whether or not this will change. “Not at the moment … ,” he laughs. “But KTM is never standing still when it comes to its model range and exploring ways to go even more extreme.”

Speaking of extreme, the level of advanced electronic rider assistance systems on the KTM 790 DUKE is insane; setting a new level for this segment by a long shot and almost on par with that of the flagship KTM 1290 SUPER DUKE R.

“We have worked very hard to make the production of the bike as efficient as possible,” Sinke explains. “Our design philosophy is one of purity; do not use unnecessary components and combine functionality where possible. And this approach has allowed us to offer a bike with such a high specification in this segment. 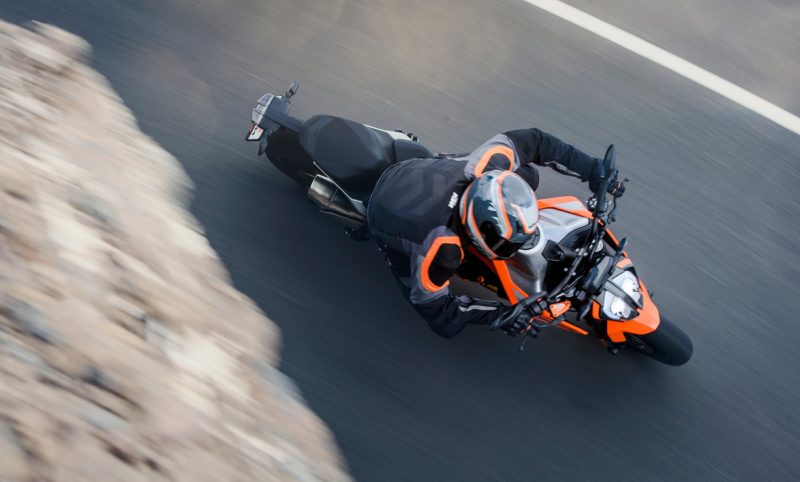 Before Adriaan has to leave, we quickly ask him what other models will get the LC8c power?

“Ah – now that would be telling!” he laughs. “But KTM is always developing new models to satisfy the needs of the market and demands of our customers. History has shown that all our engines are supposed to work within a platform of bikes and this will continue with LC8c, such as in the KTM 790 ADVENTURE R concept.”

The KTM 790 DUKE will be available in dealers around the end of March 2018 in time for the ‘typical’ riding season, with most markets covered during 2018, apart from US and Canada which will follow late 2018/early 2019.

It’s available in two colors – orange or black – with the additional option of an A2 license-friendly version, called the KTM 790 DUKE L. This has a 95 hp has and allows for a 44 hp restriction.

Head over to www.ktm.com and configure your dream specification KTM 790 DUKE from the huge range of official KTM PowerParts by using the online configurator. 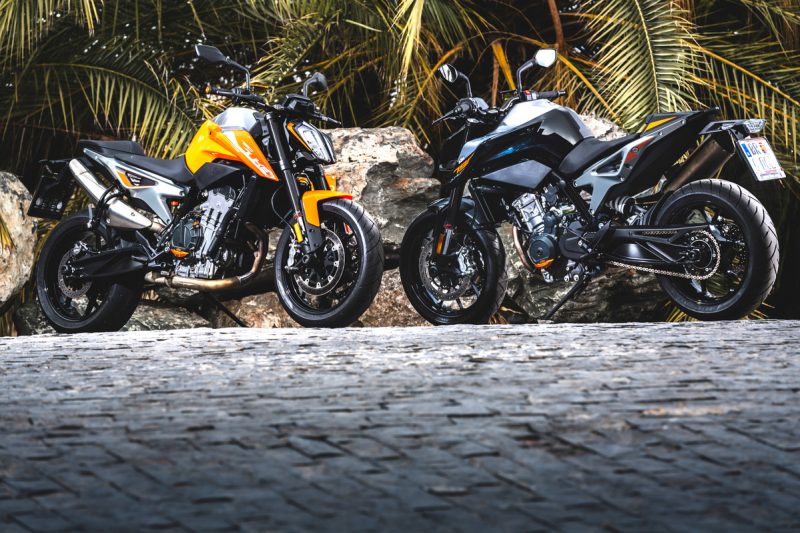