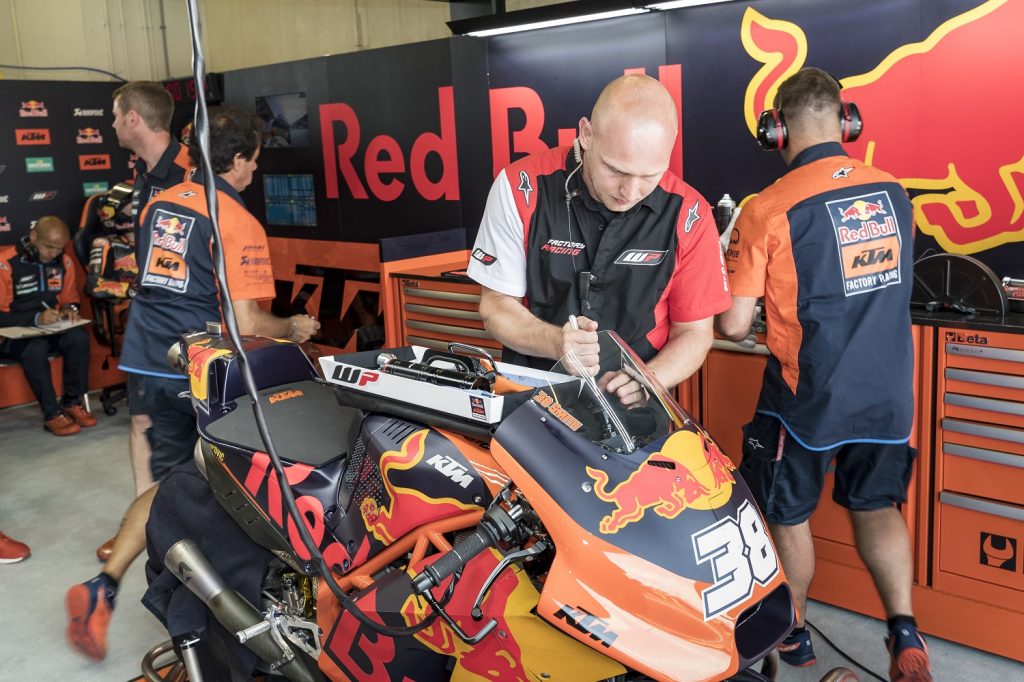 Besides their bright company color, the Red Bull KTM MotoGP™ Factory Racing outfit also has an extra hint of orange to it, solely supplied by Gerald Perdon. The Dutchman is responsible for Bradley Smith’s suspension and at Perdon’s home round at Assen he gave us a behind the scenes look at what goes on. 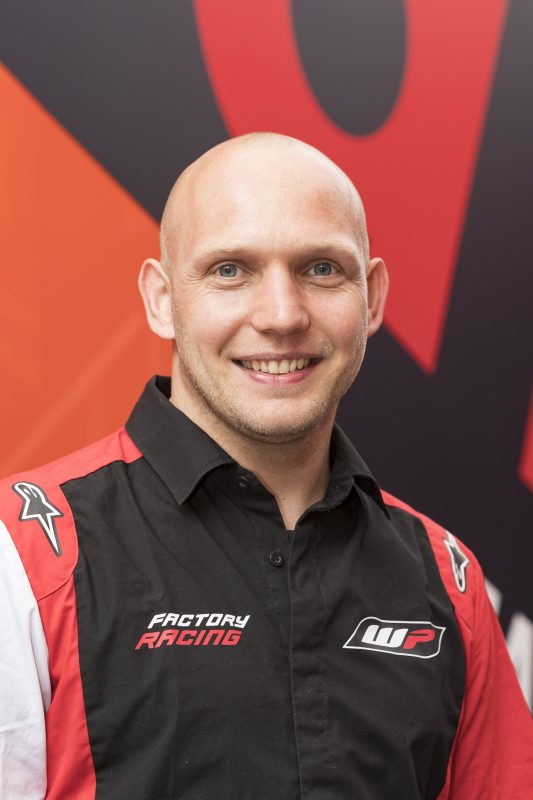 Just like Jack Miller, Dutchman Gerald Perdon took the big leap from Moto3 to MotoGP™. The 34-year-old former racer switched from spannering for Livio Loi at RW Racing GP to being Bradley Smith’s suspension technician at Red Bull KTM. “WP and me go back a while. I used to work for them when they were still working out of Malden in the Netherlands. When KTM closed the Malden plant they offered me a job in Austria, but at the time it just didn’t feel right. I went to work for Ten Kate Honda for a season, back when they still used WP suspension on the Fireblade.” After working for several motorcycle repair shops Perdon returned to the racing paddock when he found himself work at RW Racing GP in Moto3. After two seasons in the lightweight class the 2006 runner-up in the Dutch Supersport Class decided it was time for a new challenge. That challenge was handed to him on a silver platter, when KTM offered him a position on their brand spanking new MotoGP™ team. “I still knew quite a few people from when I worked for WP, developing the KTM RC8. So when they contacted me, I drove out to Austria and then everything went really quickly.” Perdon has been a part of KTM’s MotoGP™ project for just over two years now. To see what his job involves exactly we were invited to shadow him around the GP paddock during his home round at the Dutch TT in Assen, giving us a unique behind the scenes look at what goes on at KTM and WP. 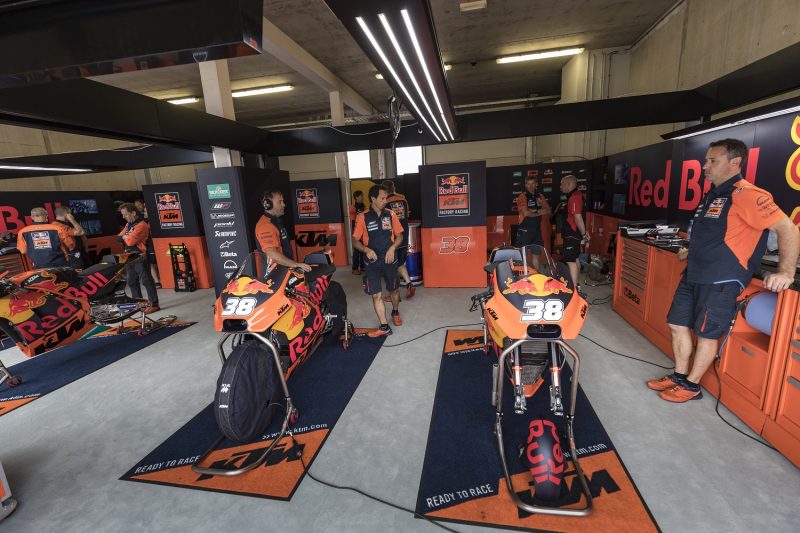 Tuesday 3.41pm – Early arrival
“A big difference between now and my time in Moto3 is the moment of arrival, which used to be on Wednesday. Now we arrive a day earlier. I usually fly to GP’s, except for the Assen round, since it’s so close. On Tuesday I only check in to my hotel; I don’t go to the track yet. Most of the time we get holed up in the same hotel with the entire team, but since the team consists of quite a large group of people it’s hard to fit everyone in a single hotel. For the Dutch TT we were housed at a holiday park just ten minutes from the track; perfect! Flying from one track to the next in Europe isn’t too bad, but the oversea races really are killing. When you’ve just about adjusted to the new time zone, you’re off to the next. That does take a toll eventually.”

Wednesday 8.17am – Planning
“It shouldn’t surprise you but a MotoGP™ bike is like one big puzzle. A single problem can have a dozen causes. Tires, electronics, engine, frame, or suspension. And everything is connected, so it gets really complex really quickly. On Wednesday we open up the shop at the track, getting things ready for the weekend. We unpack the flight cases and lay out tools, parts, bits, and pieces. We also evaluate the previous race weekend with the entire team, after which we make the plans for the rest of the weekend. The main direction is laid out by Tom Jojic, Bradley’s crew chief. Once we’ve got an idea of what to do everyone gets to it. For me that means I start to get out the suspension so we start setting them up the next day.” 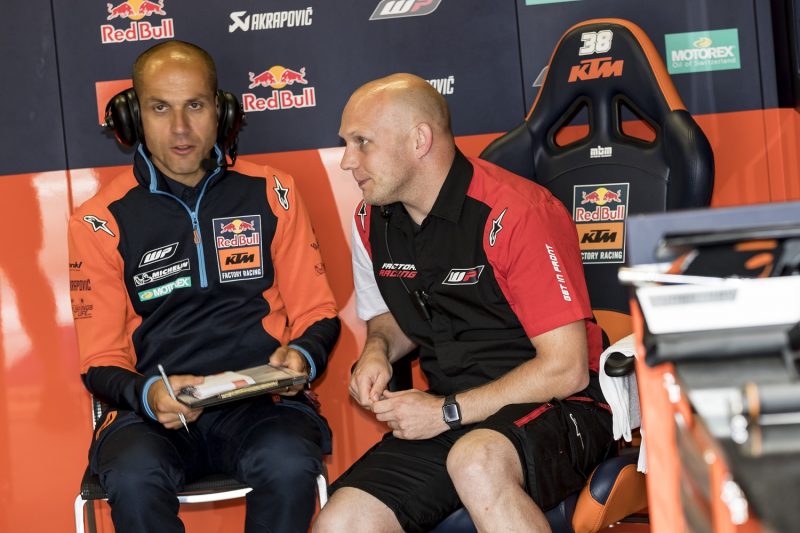 Thursday 2.24pm – Taking delivery
“Because we’re in the thick of developing the bike, we get new parts sent to us on a constant basis. Almost every weekend we get to try something new, something else. It’s a risk, changing things too quickly. If it goes wrong, you’re way out to sea. Though those are the developments you learn the most from. WP Suspension has their own truck in the back of the paddock, but that’s mostly for the Moto2 and Moto3 guys. I usually only go there for dyno runs, apart from that you can find me in the KTM truck at the back of the pit garage most of the time, by Bradley Smith’s side. Getting the suspension parts ready takes me the majority of the day, because we have six sets at hand, each with a pair of forks, a shock absorber, and a steering damper. All of them set up and built differently, so we can test a thing or two. In the afternoon I hand over the suspension so the mechanics can get to mounting it.” 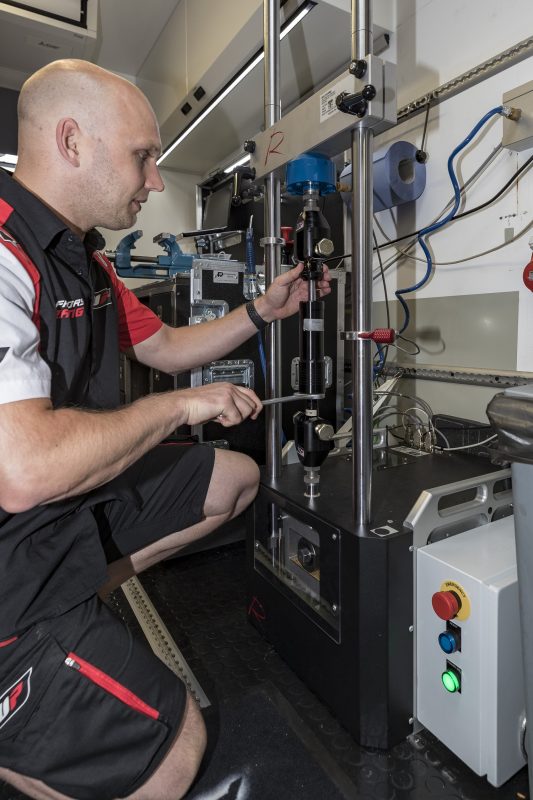 Friday 8.07am – Final checks
“It has never happened that something suddenly changed overnight, but I still check everything on Friday morning, making sure all the settings are ready to go. You can’t have an entire session be lost just because something was off. Before, during, and after the sessions I’m sat out in the box, listening to the rider’s feedback – which gets difficult because of the immense noise and because riders tend to keep their helmets on. When the rider is out there, I’m in here looking at the data. It’s all about parameters; the speed of the suspension stroke. You can’t really analyze it on the fly like that, but you can tell from the data whether or not things are set up either too hard or too soft. At the end of a session I take the data to the office to examine it further. It is a big advantage having raced myself, because it makes it a lot easier to take in what the rider is trying to convey.” 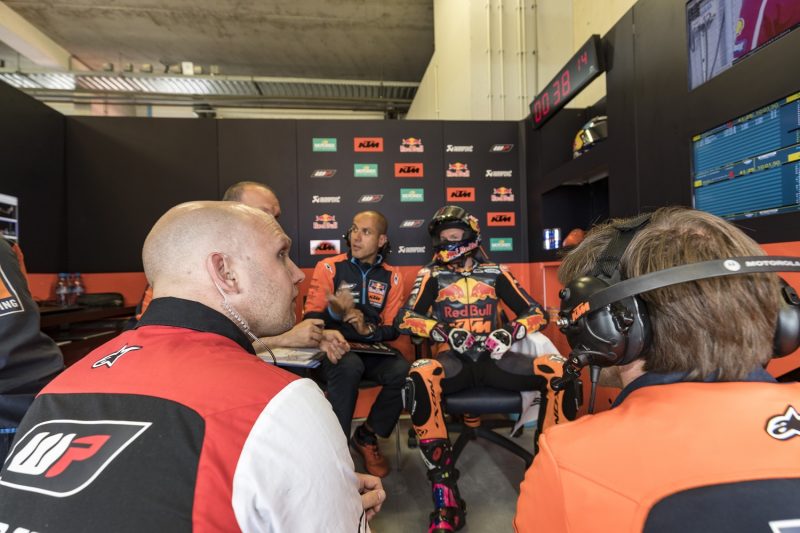 Saturday 2.10pm – Small adjustments
“Saturday is all about qualifying. There’s hardly any time between the final free practice and Q1, so we hardly ever take a set of forks out. It easily takes up half an hour, so it really is something that only happens in case of an emergency. During practice sessions I sometimes change little things, dialing in small changes. The big suspension changes happen in between sessions. Though during the course of a weekend you’re mostly fine tuning. I do look at Pol Espargaró’s data from time to time, but most of the time they’re not of much help, because Pol runs a completely different setup. To get the big picture it does help, and only through working together we can get the results we’re after.” 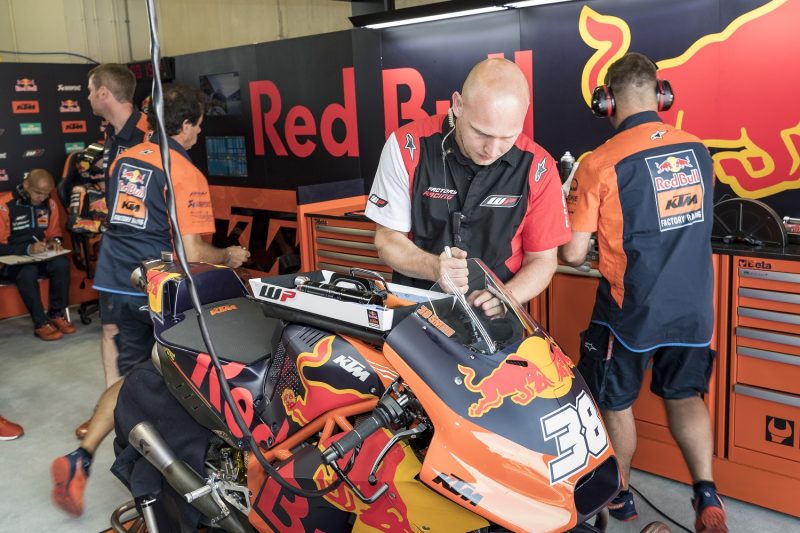 Sunday 12.25pm – The race
“I’m on the grid, but at that point there isn’t much I can do anymore. Before heading out there I’ll have copied all of Bradley’s setting from his number one bike to the spare. If the weather gets sketchy I’ll dial in a wet setup, and if the weather takes a turn for the worst, I will try to make my way to the pits as quick as I can. We have to soften the fork and swap the shock absorber – which sounds a lot more difficult than it is. Currently we’re fighting an uphill battle at the back of the field, but we have to be realistic and as long as we’re in the race for points we’re happy. If we want to make it into the top ten we’re going to need to make another big step. The riders are aware of that; it’s a new project, and as long as we’re making progress, we’re happy and we stay motivated.”

Sunday 4.03pm – Almost done
“My work isn’t finished when the race is over, because I have a report to finish. We note everything we’ve tried; what worked and what didn’t. I also fill out a form stating which parts I’d like to see back at the next race. All in all it easily takes up half a day. I usually finish up on Monday, another difference to Moto3. Back in the lightweight class we’d leave for the next race on Sunday evening, because we could already start packing up before MotoGP™ had even started racing. Nowadays I leave on Monday, so a racing weekend lasts about two days extra in MotoGP™. It gets quite heavy working in the GP paddock sometimes, so you really have to love playing the game if you’re willing to make your time here last.” 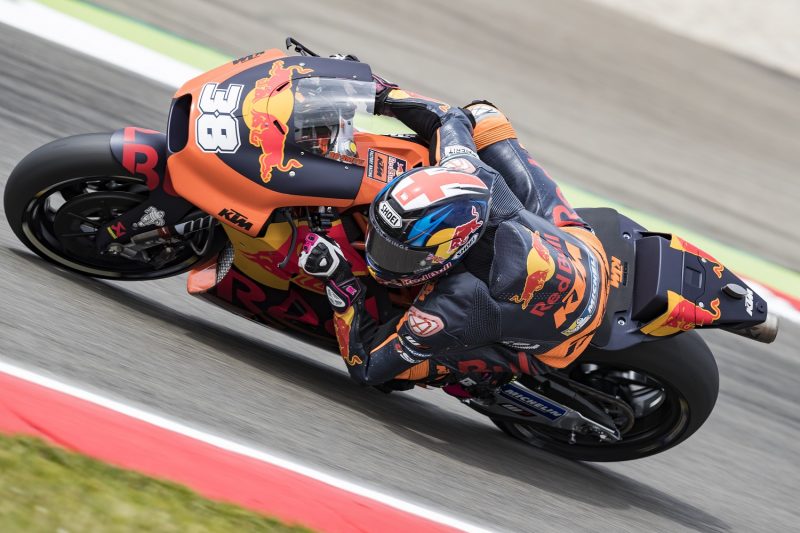