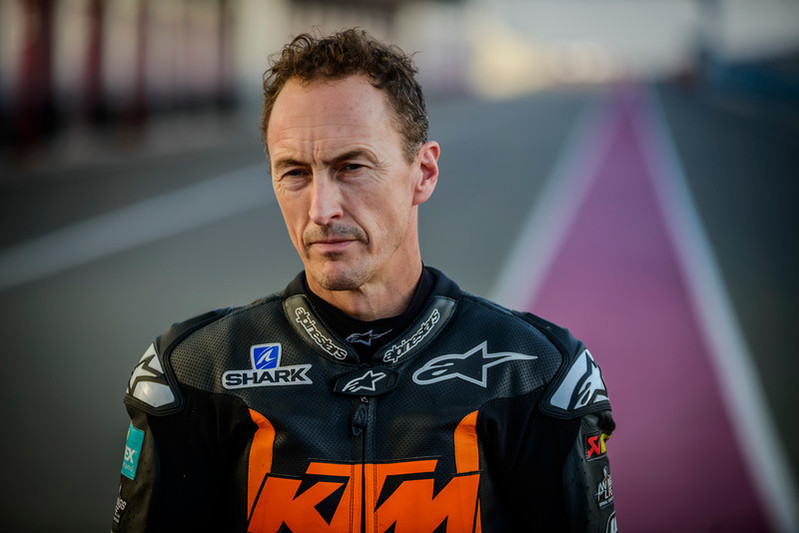 Interview of the Month: The ideal ambassador – McWilliams and his KTM role

MotoGPTM star lends special edge to KTM street bikes and now new Customer Racing division but how did a still-competitive 53-year-old Northern Irishman become a lynchpin for the Austrians? We asked …

For more than ten years former MotoGPTM man Jeremy McWilliams has been an important, appreciated and high profile cog in the flowering street portfolio for KTM. He has also kept busy since his days as a gutsy and smart Grand Prix athlete known for figuring out and squeezing the maximum from some unlikely racing packages. As well as his orange shirt for R&D, Customer Racing and the KTM RC CUP, Jeremy is also submerged in Dorna’s British Talent Cup scheme and is splitting time between developing the next range of bikes as well as the fastest kids to eventually race them.

We agree to meet in the Alpinestars hospitality at Aragón for the final European round of MotoGPTM before they start their three-leg trip to Japan, Australia and Malaysia. It’s easy to talk with the veteran who still gets on the grid and recently contested a round of the SS300 class and also whipped through the lanes of the Northwest 200 road race as late as last year. Aside from his toil with the KTM RC 390, Jeremy’s most obvious KTM link lies with his development contribution to perhaps the best street bike to come out of Mattighofen to-date: the KTM 1290 SUPER DUKE R.

Before he became a co-forger of desirable naked bikes McWilliams’ union with KTM naturally drifts back to more track-based roots. He tested the first (aborted) attempt by the firm to tackle MotoGPTM in 2004 and was then asked to fill a prep role for the now-defunct (and missed) KTM RC8. Since then orange has become the dominant color.

Over a cappuccino we discuss his position both past, present and future.

So your KTM adventure started properly with the KTM RC8. Was the brief to come in and give some consultation and the job grew from there?
“The KTM RC8 was a brilliant bike and I am sad to see that it is ‘no longer’. I had some good times with that bike and I was involved in all of the launches. My role there was to find a setting for the bike that would work for every size and speed of journalist and marry tire performance to suspension and that kind of thing. I would come along a day or two before the launch and it would sometimes lead to magazine tests where I’d be asked to get the best out of the bike. The KTM RC8 was always top 3-4 with the other sportsbikes and managed to punch above its weight.”

What do you think KTM then saw in you to submerge your role deeper into R&D?
“I remember getting a phone call from them saying “we want you to come and have a look at something … it’s in Tenerife” and I thought ‘that’s a weird location’ but they wouldn’t tell me what it was about. When we got there, we went to a small ‘finca’ where KTM had a load of new bikes and bits and pieces hidden away. It was like something out of a 007 movie, dug into the side of a mountain in Tenerife. I was told we were there to keep away from prying eyes and then they rolled out the very first version of the KTM 1290 SUPER DUKE R; there were only two in existence. I was told to ride it around the roads and give my opinion. Initially I loved what the engine had to offer and I’d never sat on something with as much torque in my life but there were other aspects that I didn’t like. I told them and I don’t think it pleased them.” 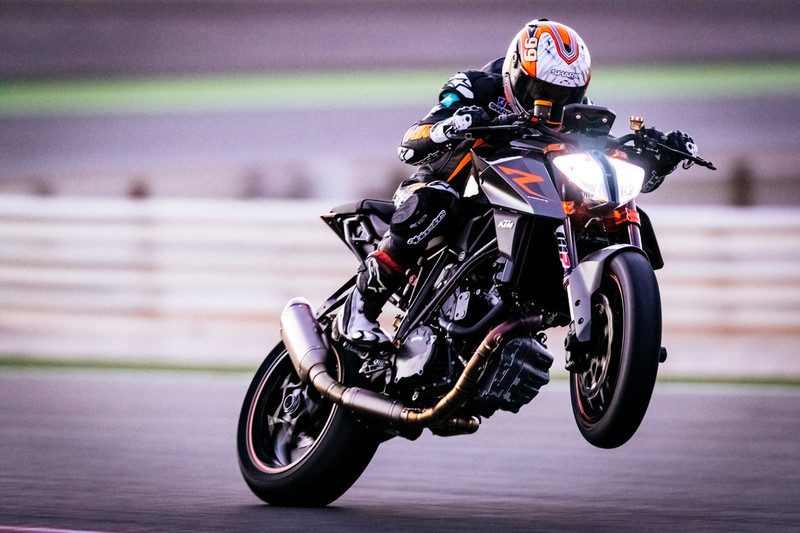 An example?
“I’m still very good friends with the project leader! But Hermann [Sporn] would agree that I didn’t like where the footpegs were and how sporty the bike was. I said I couldn’t reach the gear lever or cover the rear brake, and I use a lot of rear brake. They were set too far back. It led to a whole discussion about the pegs and then I said “while you’re at it the bike steers a whole lot better going right than it does left” and they said “how can that be?!” I was just giving my opinion. They took this information on board and went back to Austria. I had another phone call to come back and try a revised version and they had stiffened up the single sided swinging arm. Around corners the bike was trying to stand up and it was making 140 nm of torque I remember, so you needed this huge, stiff swinging arm to make sure there was no steering from the rear wheel. So, it got fixed … I got asked back, but maybe I am too forward! Instead of saying how great the KTM 1290 SUPER DUKE R was I told them what I didn’t like about it. Then they gave me a sheet of paper to do what I wanted, it was quite a long list and I didn’t realize what went into producing a street bike and how even a different set of tires would change things. We went through every single manufacturer and profile of tire, head angles, profile, trail and brake, offsets, fork lengths, all of these things. We started playing with ride heights, seat heights, rider position, handlebar position. It all came quickly.”

How long was that period?
“They had to cram a lot of work into a year in a half. It was a stack of work. As with most of these products you don’t have as long as you’d like and you always want more time. We were always up against the deadline.” 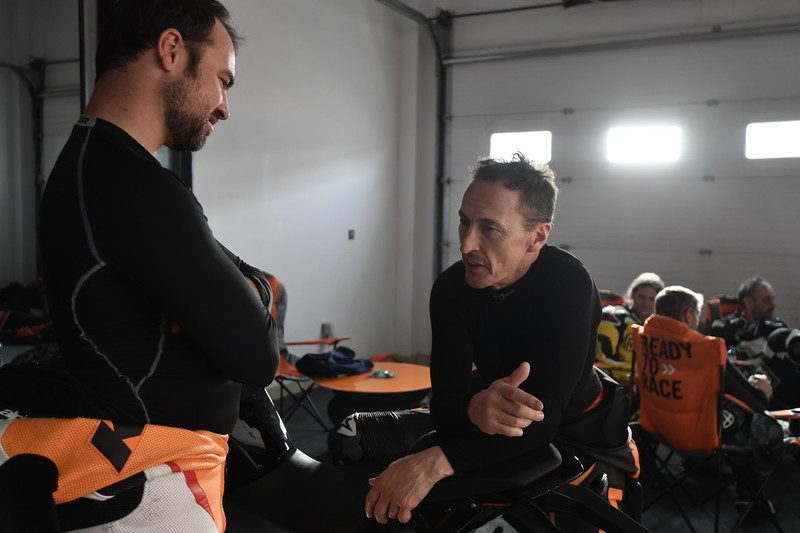 How did you feel about the amazing reception the KTM 1290 SUPER DUKE R had? Were you also aware that you wouldn’t get many opportunities like that?
“You would never get a job like that with anyone bar a European manufacturer and maybe only one. I ended up working with different development riders in the R&D department that have now gone on to become brilliant test riders. We didn’t have that many who were capable at the time. They have more now, and I think I was able to contribute by helping find what we were looking for. Those guys now are top-notch riders … and I might not get that much work! What we are doing in Customer Racing is orientated solely towards the track: taking those road bikes and developing them for track use. My role with R&D was in helping to produce brilliant road bikes. To answer your question I think after the initial response from the media the reaction was one of ‘phew, they like it’ and then we were all so delighted that we had achieved what we wanted with the bike. It still gets rave reviews and people still love it. I still do some tuition on track and a few guys come to ride naked bikes instead of pure sports bikes and the KTM 1290 SUPER DUKE R was the first model that could really do that and still does that.”

It must have been a different kind of buzz for you …
“The whole department were really satisfied. We were all patting each other on the back. There were times when we were really ‘up against it’ and had some issues that were hard to overcome. It is not the easiest environment either in R&D when you have to produce something for a certain date but I think we did alright, and there were no thoughts when it came out of ‘we could have done that better’. We were all delighted. I still ride one and I’m on the 2017 model at the moment.” 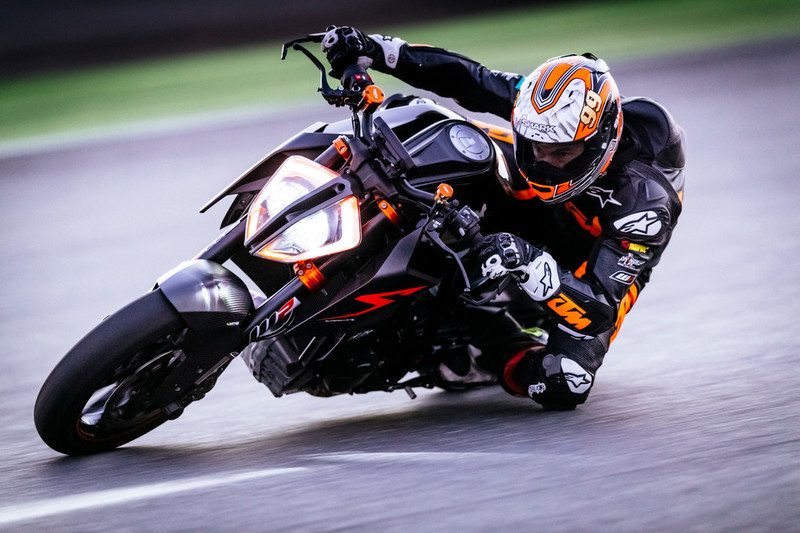 Riding a Grand Prix bike must be something but also a prototype that people won’t see for another three-four years is also pretty cool …
“Yeah! I’d like to do more with R&D but it is limiting with time and we have a lot to do in Customer Racing. What would give me a lot of satisfaction would be to see our KTM RC 390 winning races at world level in supersport because I have been involved in the development of that and with WP suspension guys and through a small Italian team. It would be a great pleasure if we can see that project becoming competitive.”

You seem busier than ever …
“The next two months our focus is to deliver the World Final at Jerez with two wildcards to be run at the final round of WorldSBK. That’s the priority and I’m not travelling to the MotoGPTM flyaways. It meant a little bit of space in October to see if R&D needs me. Customer Racing is getting bigger and busier and the next projects will be interesting, so that’s something to look forward to as well as explore the ideas for new racing series around the models. Then we have to get on the KTM 1290 SUPER DUKE R to look at some new prospects, get it on the track again and improve it even more for the track. There are some good ideas floating around but when they will fall into place we never know.” 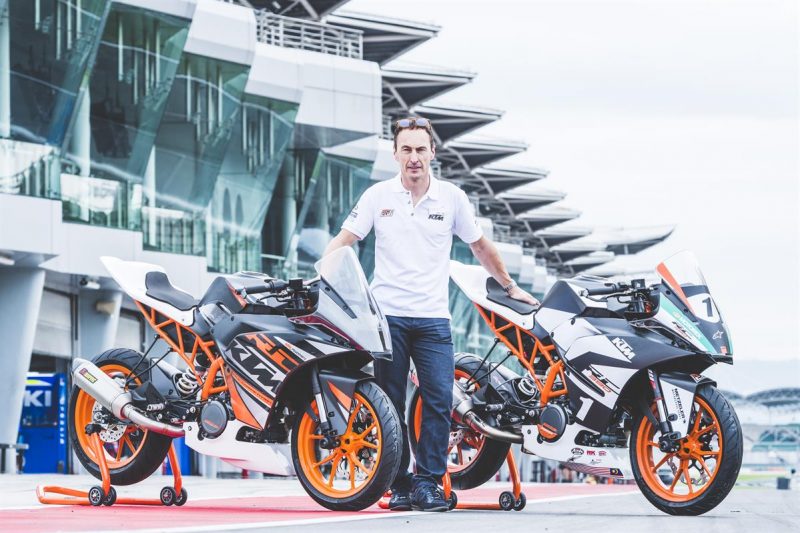 45 Responses to Interview of the Month: The ideal ambassador – McWilliams and his KTM role