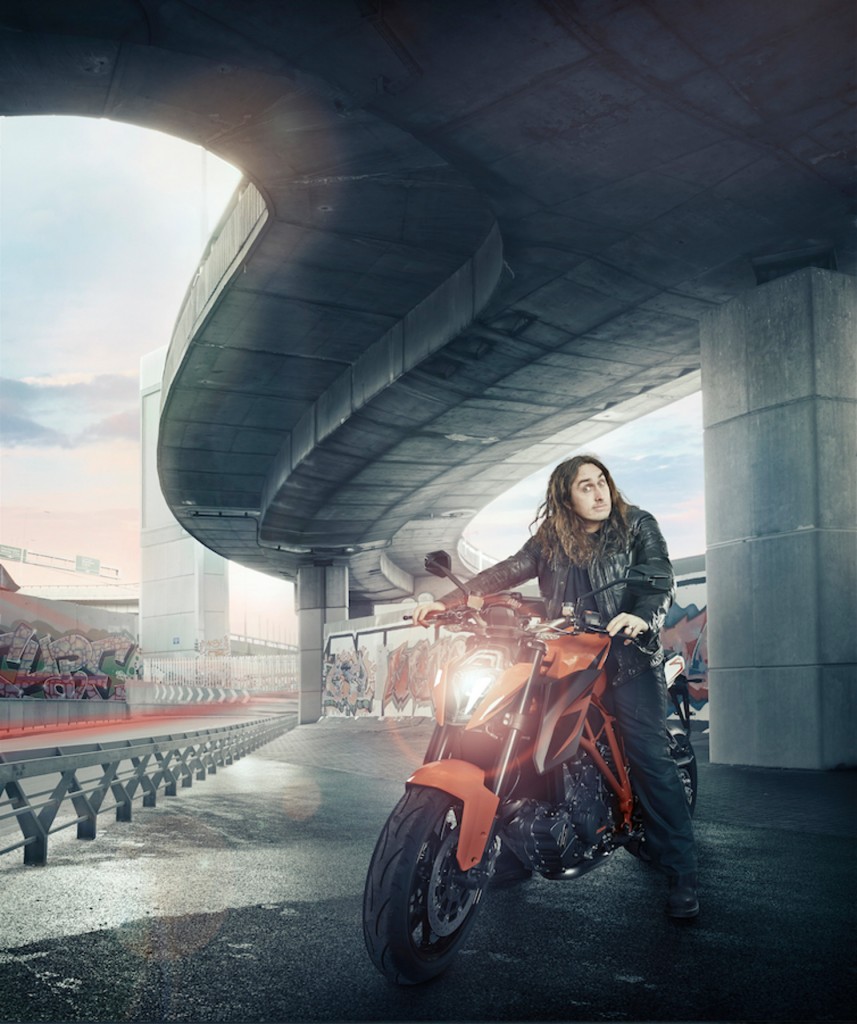 Ross Noble is one of the biggest names in stand-up comedy in the United Kingdom and Australia and the 38-year old is also massively into his motorbikes – on and offroad. He competes in Enduro races, having won the solo clubman 24-hour category in the gruelling Dawn to Dusk event last year on a KTM 300 EXC.

Ross also has an alternative travel series beginning on TV in the UK on March 24 which sees him ride the length and breadth of the country on a KTM 1290 SUPER DUKE R. The KTM BLOG caught up with him before the first episode aired. 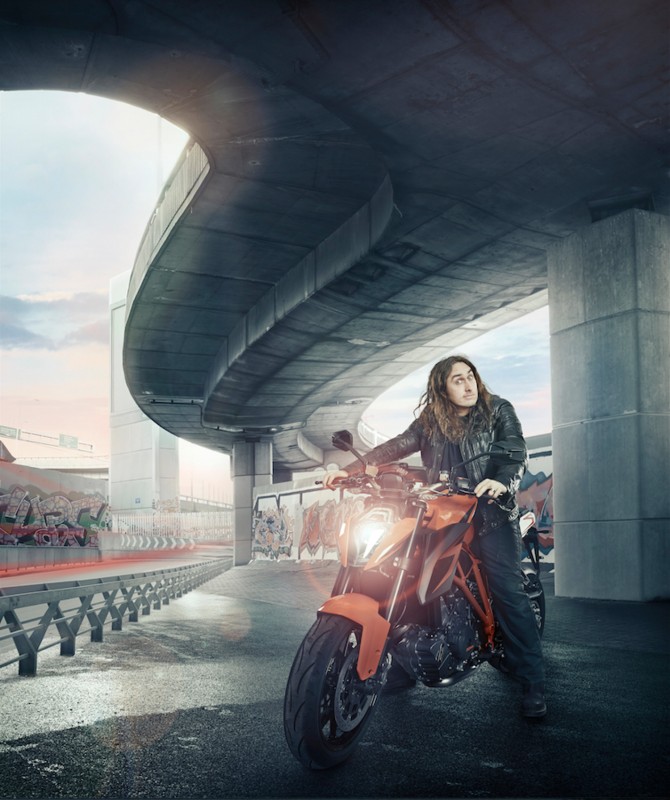 What are you up to?
“Well, I’m at Heathrow airport about to board a plane to Australia.”

What’s going on there?
“At the airport? Just hanging out and meeting people. Two guys in security here wanted to have a photo – no problem – but they forgot they would have to leave the detecting archway thing unattended. So they were running around trying to sort someone out to cover for them and by then a big queue had built up with angry passengers. So I offered the security chaps the chance to get the photo with me in one of those new body scanners, but they declined. They could have printed it out, like we were all naked, without having to take our clothes off. Sort of like a tasteful way of doing saucy photos.

But yes, I’ve got a tour in Australia starting. I’m not sure how may dates there are, but its two months solid. About 50 or 60 gigs around the coast.”

You’ve also got a new TV show starting in the UK, tell us more about that?
“The second series of Freewheeling starts on March 24 at 10pm on Dave and is basically an excuse for me to ride a motorbike around the UK in order to have a series of mini adventures.

The whole thing is done from people tweeting me suggestions of events or places to check out – none of it is planned. So at the start of each day I have no idea where I’m going, who I’m going to meet or what we might end up doing. So we get the suggestions, pick something that sounds interesting, go film it and that becomes the show.” 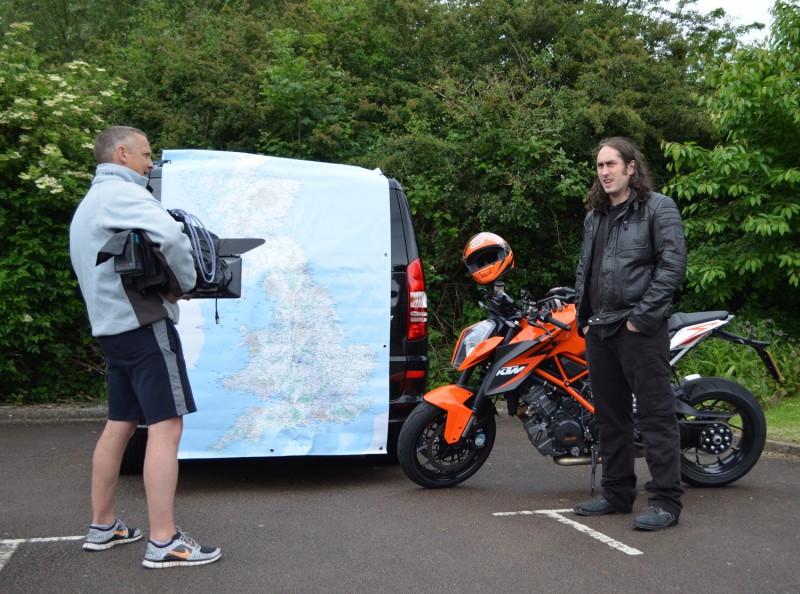 Very random. An alternative travel show?
“Sort of. But that’s the beauty – it’s so random. What happens with TV and most conventional travel shows is that someone has an idea but then everyone adds suggestions of how it could be done or made. Which means locations, events, people – whatever the subject matter – has to be checked out in advance. So by the time you start filming, you know what is going to happen, so there is no spontaneity.

With Freewheeling, if someone tweets me to visit his or her house it could be a mansion or a gritty bedsit. The person could be highly articulate or someone who can’t string a sentence together. We might go to something or somewhere that sounds incredibly mundane, so I turn up and try to liven it up a bit. On the flipside, I may visit something interesting and try and make it seem really dull. So, basically, it’s just an excuse to meet people and put things on television that you’ve never seen before.”

You rode a 1290 SUPER DUKE R for the whole series. Why?
“With the sort of miles we ended up doing for the series – about 6000 – most folk would want a big screen and weather protection, so the obvious thing would have been to do the show on a big touring or adventure bike. Not me. We did 2000 miles in the first week and the cameraman – on an KTM 1190 ADVENTURE – thought I’d be suffering. But it’s really bizarre just how brilliant the bike is; incredibly comfy for long distances and zipping around town when searching for places. You just wouldn’t think it. Of course it’s looks incredibly cool as well.” 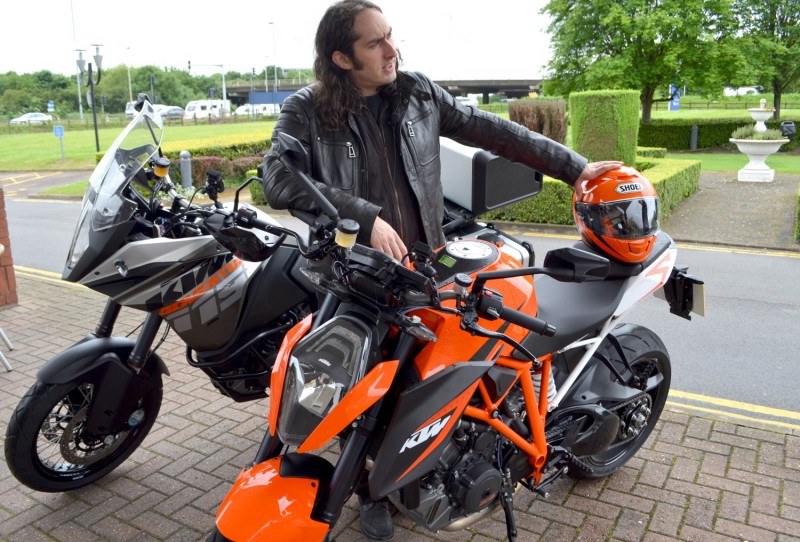 What’s the highlight of the series?
“That’s a really tricky question as there’s an awful lot crammed into the six episodes. One of my highlights was jumping over some toy double decker buses on the 1290. It was only two foot in the air, but nice to do a bit of stunt work like Evel Knievel.

But probably for me, was when we convinced the head of Northampton Council to let us put up plaques for famous people of the area and got Alan Carr and Robert Llewellyn involved. Actually, scrap that; the highlight was when we blagged our way into Billy Ocean’s dressing room and got him to send a message of support for a man who was summoned to court because he had taken a courtesy car he shouldn’t have and so the insurance company had taken legal action to get money back. So we started a campaign – ‘Justice for Brian’.”

You’re a very keen Enduro rider, do you prefer riding on road or offroad?
“I like both, but more so offroad as there’s so much more going on; from the difference between reasonably smooth tracks to riding over rocks or through forests. Riding anything really technical, like a riverbed, I could happily do all day long. I’m not that bothered about the view.” 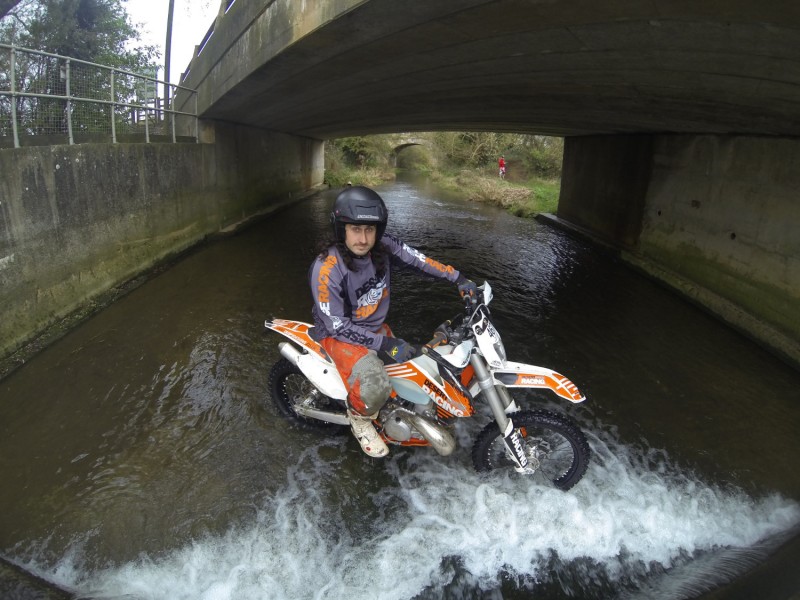 You won the 2014 solo clubman class in the 24 hour Dawn to Dusk Enduro event on a KTM 300 EXC. How did you manage that?
“The thing is, I’ve been green laning and trial riding for all my life, but never raced. I never really thought I could do it and that you’re supposed to start competing when you’re a kid or that’s it. So I used to just enjoy riding in the bush when I lived in Australia, which is more like a cross between green laning and adventure riding.

I never thought to enter a race until, in 2009, I was riding in Wales with the man who runs the Dawn to Dusk Enduro event. He told me only three teams had entered in the Pro Class that year and if we joined and one of those teams had some sort problem, all we had to do was finish to be on the podium. So with the chance of possible glory and not knowing just how hard the event was, I entered with a mate. It turned out to be really, really hard and, of course, the Pro Class didn’t hurt themselves or break down. They were pros, after all!

But there we were, as novices, racing the best Enduro riders in Britain on a massively inappropriate and under-prepared bike. Me and my mate hadn’t done any fitness training or entered something like a three-hour hare and hounds as preparation. We didn’t even have the right kit. We were just sort of green laners on the start line of a very professional and hard race. But we actually finished it; we didn’t give up and took it in turn to ride the full 24 hours we took it in turns. My friend said he was never doing it again, but I really liked the insanity of the event. Not just the racing, but the adrenalin rush. So I thought if I put the effort in, I could go a bit faster. So bit-by-bit I got better and just rode as much as I could.”

And did that work?
“Well, I returned each year and entered the solo 24-hour Clubman class and kept finishing 4th or 5th. One year I missed getting third by around 15 minutes so I thought that if I’m only 15 minutes away after 24 hours of riding, lapping one or two minutes faster a lap would mean I could pull an extra half hour of time. It’s the difference from stopping for a drink or just cracking on. So if I could get bike fit to not need to rest as much and then mentally train myself to get my body to cope with it, I could do a lot better. I also did some six hours racing events, participated in Romaniacs, the Roof of Africa and some other extreme stuff.

So after lots of saddle time, come last year on the start line I knew what I had to do. Three or four guys just went for it, but I didn’t go silly and to just let these boys tire themselves out. I rode smooth and steady and just checked where they were each lap. By midnight I’d got in the lead and kept riding in a fast trail riding style. I think I ended up about four laps ahead of second place, so I could have eased off!

So that was the Clubman class and if I was going to return to the event I’d have to ride in the Expert group. But it wasn’t about the winning, just finishing something that I’d started and to ride a motorbike offroad for 24 hours without stopping is a daft but fun thing to do; the racing is almost secondary as you are mainly racing against yourself. But the camaraderie is good with mates and other riders in the pits.” 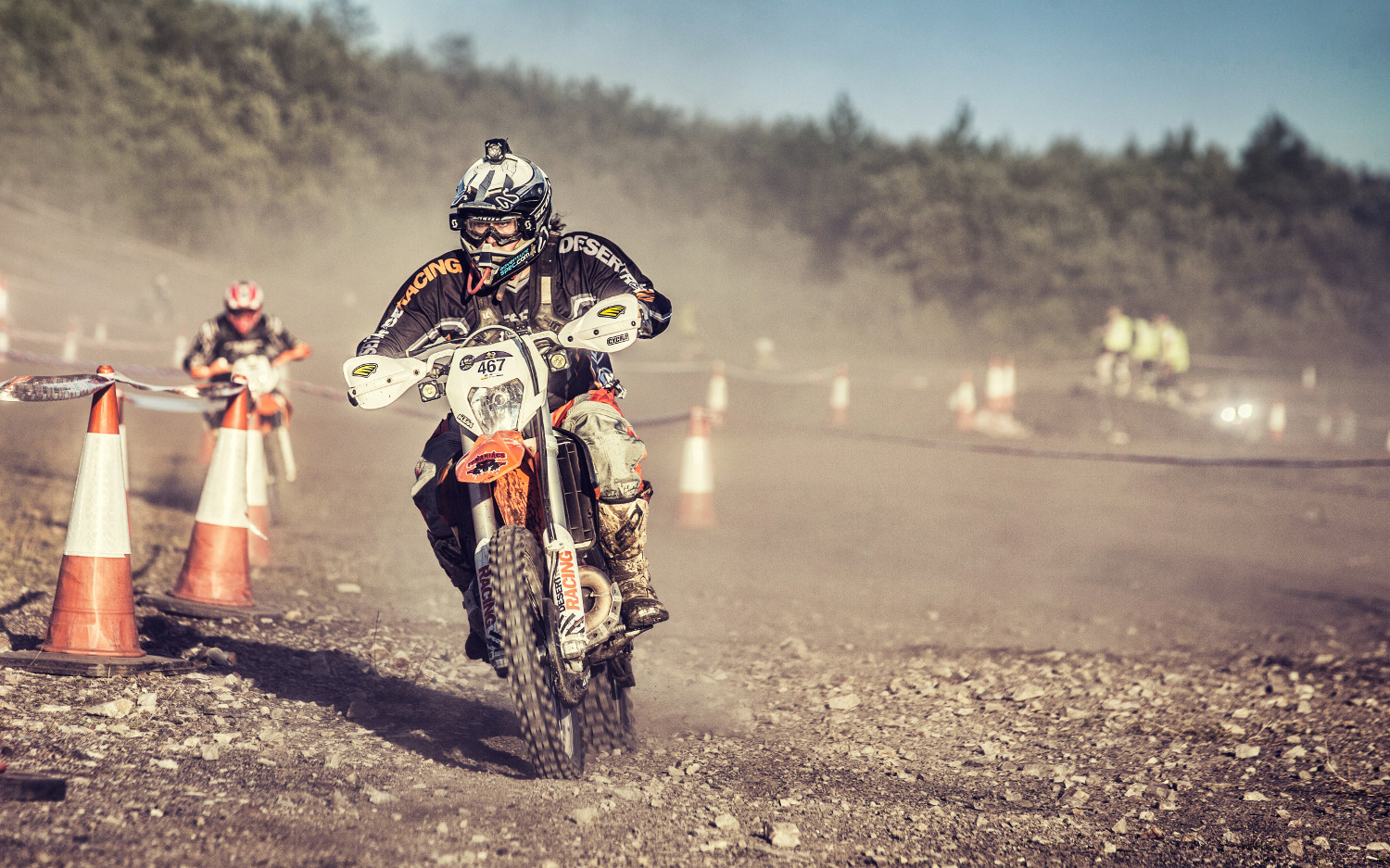 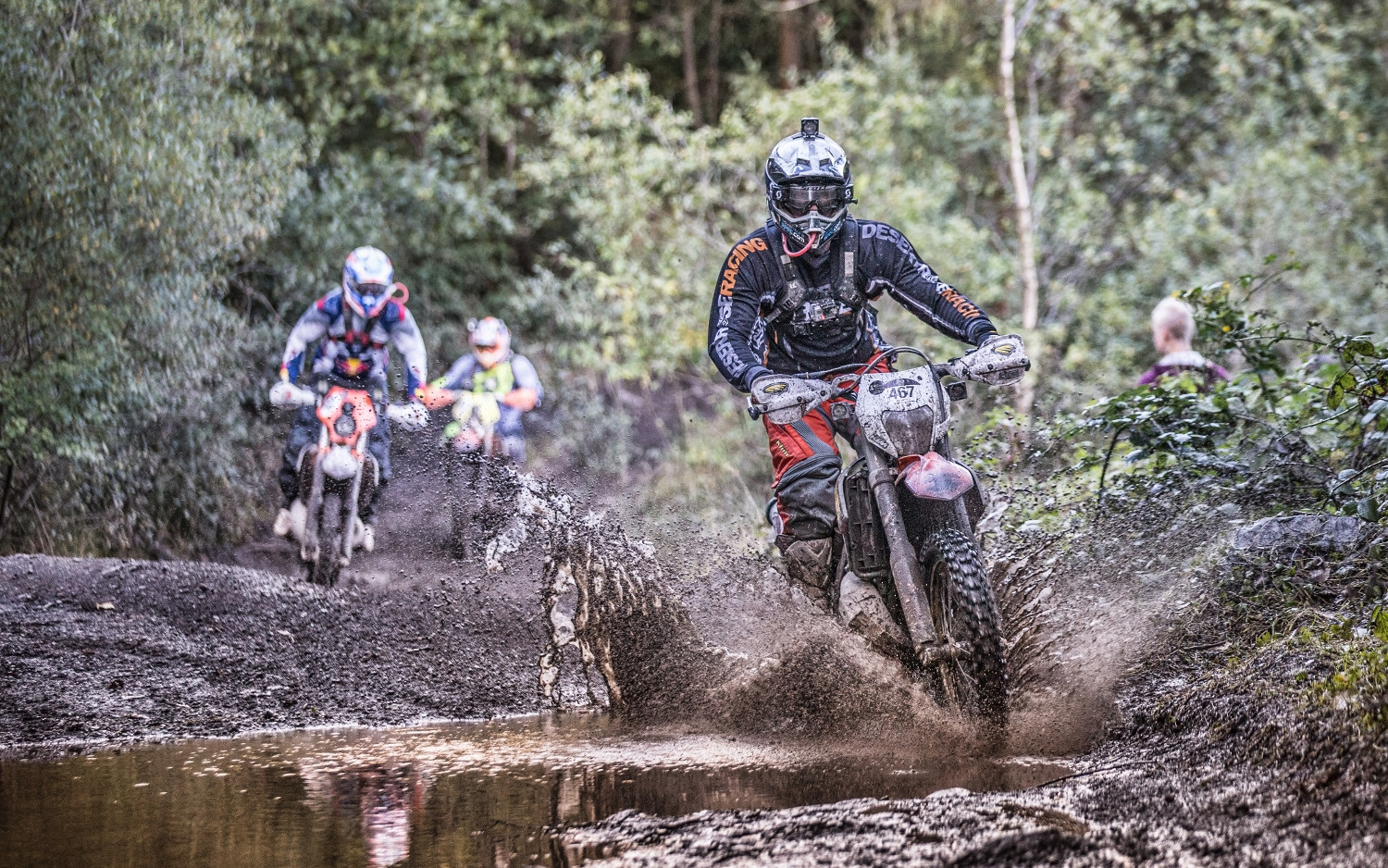 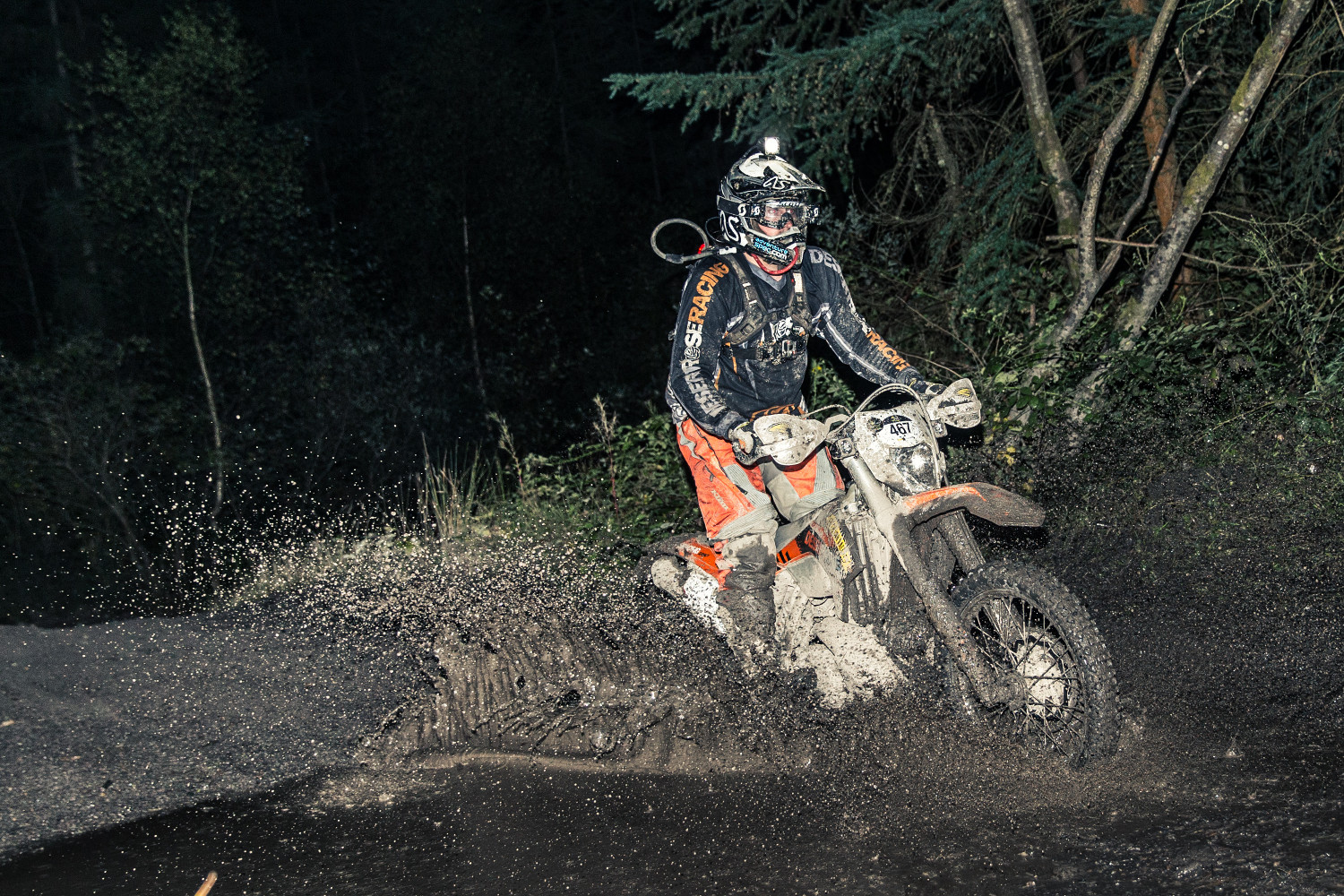 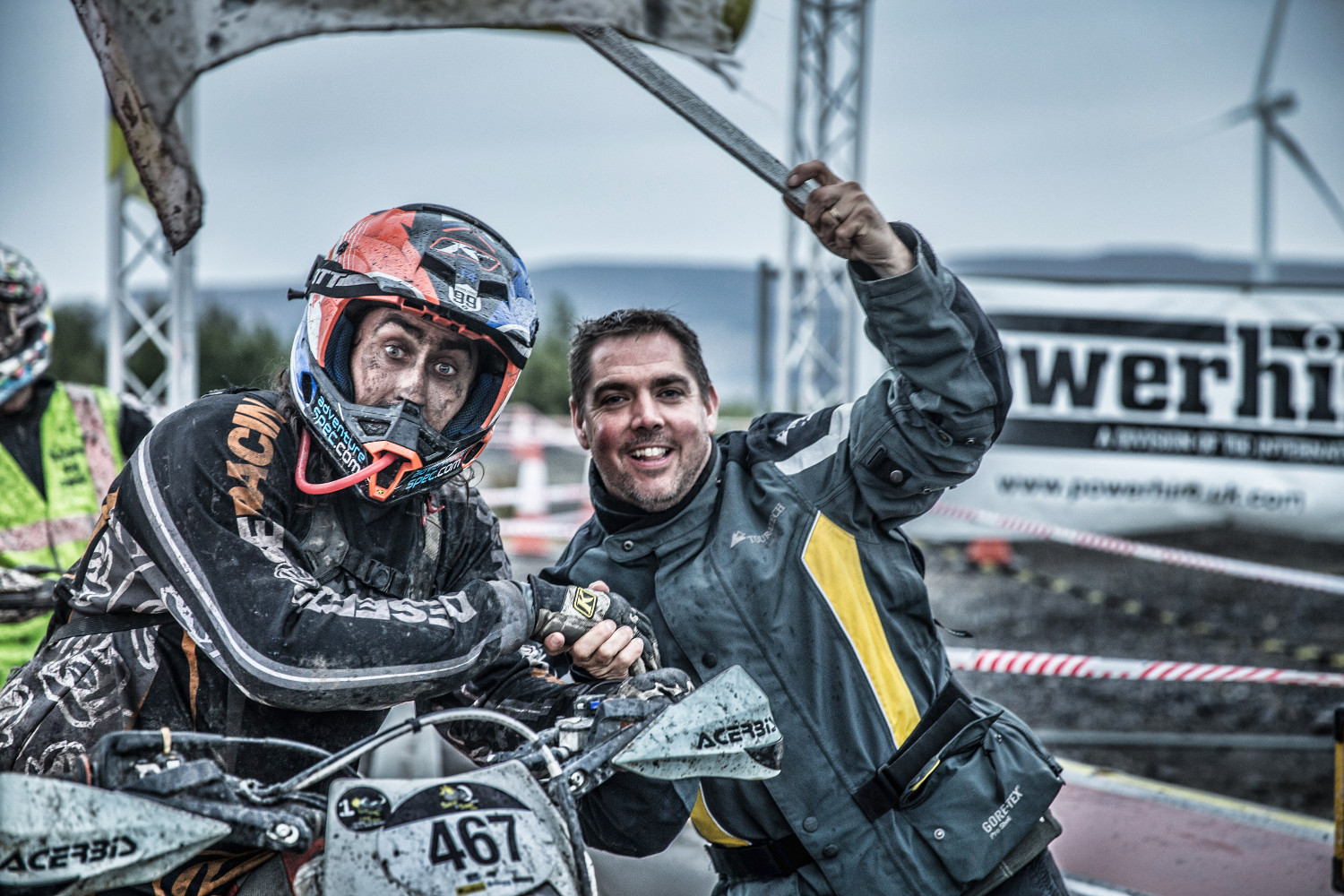 Do do you prefer four or two-stroke for Enduro?
“What I love about two-strokes is that, for the more technical stuff, it is just lighter and you get more response from them quicker. I quite like the fact you have to ‘ride’ them; you can be lazy on a four stroke. Saying that, I’ve been on my 300 EXC and haven’t’ ridden a four-stroke in ages, so maybe I’d be faster on one now. But I like the slightly lairy nature of the two-stroke; you get the odd moment where it bites you a bit and wakes you up. Steady away!”

What are you up to when you get back from Australia?
“When I get back to the UK I’ll be performing in The Producers. As I’ve got to sing, dance and even climb a ladder in the show, I can’t do anything too hardcore that might see me hurt myself, so I’ll probably not ride offroad until the end of the year but will do some local Enduros and maybe some extreme events.

On road, I’m scaling right back on my ‘fleet’ of road bikes, but I’m thinking of buying an old KTM 990 ADVENTURE and modifying into something that’s more adventure bikes meets scrambler. I like the idea of taking a long distance adventure bike and messing with it a bit. But while that happens I’m going to ask KTM UK if I can borrow a 1290 SUPER ADVENTURE as I really want to see how that goes.”

You’re clearly a two-wheeled petrolhead, but what is your opinion on e-mobility bikes?
“It’s very interesting and I quite fancy a go on the KTM FREERIDE E-SM; a bike that shows that biking doesn’t have to be anti-social. But then I think to myself, I can ride through a supermarket on that motorbike. Actually, I just really want to do that.”

Find out more at www.rossnoble.co.uk.

108 Responses to Interview with comedian and KTM Fan Ross Noble