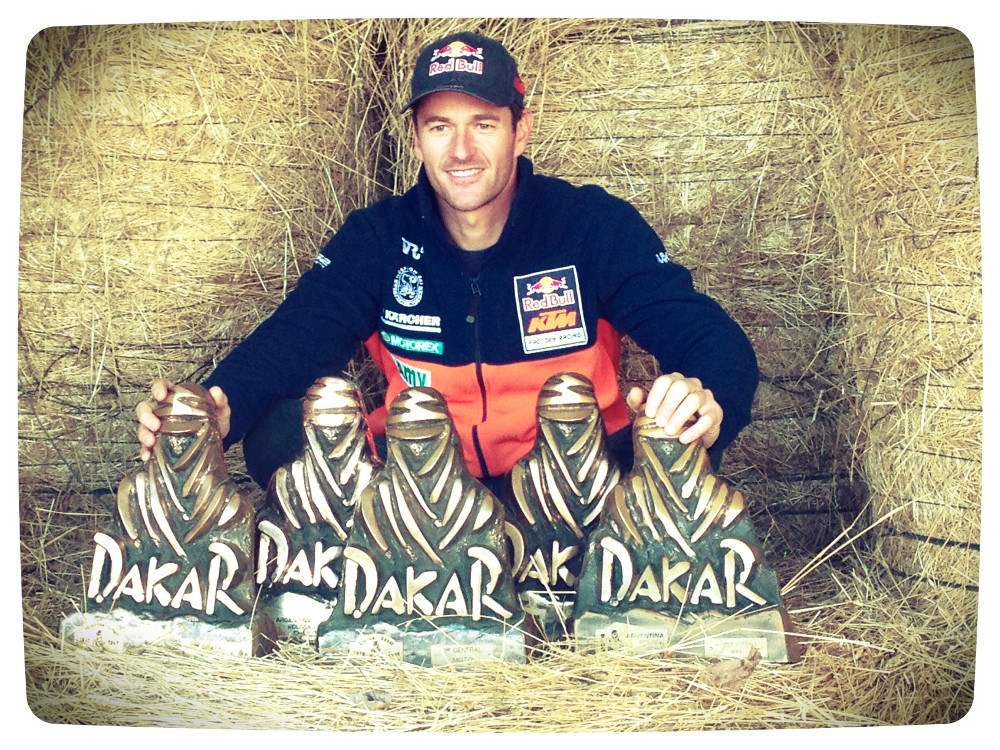 Interview with Marc Coma: The Dakar warrior returns with a fifth trophy

KTM’s Marc Coma took an incredible fifth victory at the 2015 edition of the Dakar rally and it was also the orange manufacturer’s 14th consecutive win at the race credited with being one of the toughest in the world. Almost two weeks after the event and Coma is jubilant, but visibly tired after numerous interviews and celebrations as he returned to his home place in Avià, Spain. We caught up with the Dakar-man to talk about the feat he conquered this year and his reflection on the race after returning home. 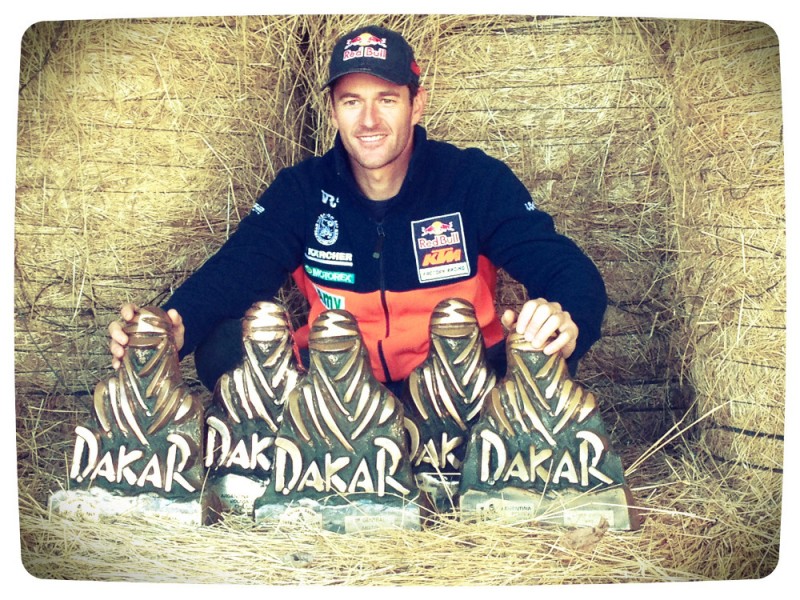 Talking about his overall feeling of the race Marc Coma explained that while it was of course difficult, it’s a credit to the preparation and the work from the team to reach this result again.

“Of course the feeling is super and I’m very happy. We worked very hard with all of the team together; everyone knew what they had to do at each moment, and when it’s a tough race like Dakar you need that. The preparation is important for the arrival at the end. From the mechanical side it was fantastic, but also physically I felt good and my riding level was okay. It was a hard race like always, and the competition was close, but in the end we could handle it.” 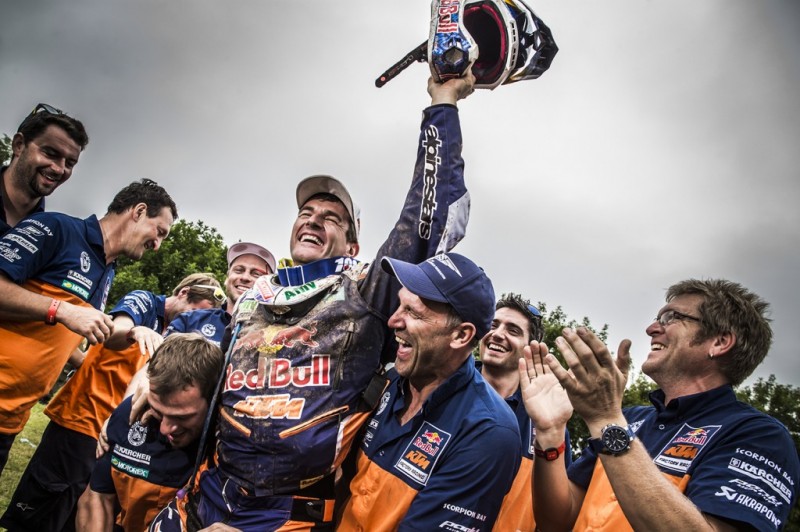 Planning is a key part of the Dakar, and while most teams have a plan from the beginning, Coma was forced to re-think his strategy after a moose issue in the back wheel on day two. He lost twelve minutes to the leaders, and had to push a lot more than he would normally, but his consistency once again paid off. The marathon stages were also where his competitors lost valuable time, so the Spaniard explained that while it was as tough as ever, the strategy for the marathon stages continued to be the same and it paid off.

“To handle the marathon stages is key for the Dakar, particularly in the second part of the rally. It’s okay to go fast, but in these stages you have to be careful and not just go full gas. You have to manage the tyres and everything to make sure you can get to the end. It’s a real balance.”

In comparison to other Dakar’s the most talked about stages were day two, and the salt flats, which haven’t been included in the route previously. Both of those days were at the extreme, and saw a lot of riders forced to retire, although Coma says the spectacle of the salt flats was also a highlight and reaching the end of this stage was almost like a victory. “To compare each Dakar is difficult. Of course the conditions we found in the salt flats were terrible. With the salt, water, cold and this stuff getting into the engines was really tough and a bit different compared to the other races. From a highlight point of view the picture from this Dakar is the salt flats, and the pictures we have from Bolivia are the feeling to remember from the Dakar in 2015, although for me it was on the limit for us.”

“To be all together in the white skyline, all lined up was something interesting, but to get to the end of this stage was just like a survival. It was a big victory; it was very hard for the engine, and to understand what was going on, whether it was too hot because of the mixture off the flats on the bike, or whether to go fast, or how to manage the situation; it was not an easy thing to find the limit.”

“Day two was also a tough day, when we were close to 50 degrees, then another day we would be in minus ten and this gives a little picture of what we find in the Dakar. Anything is possible. We find a lot of different conditions, and not one day was easy this year. Even on the last day; normally the last day is quite fun, but it wasn’t like that.” 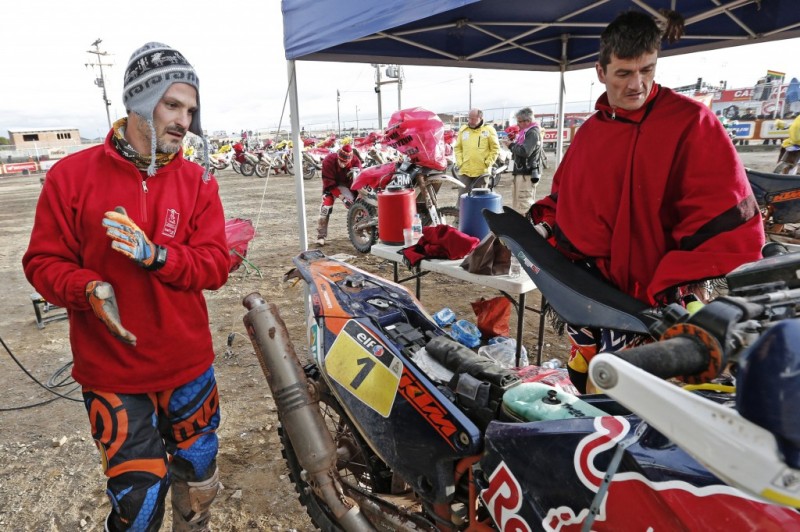 The final day of the rally was red flagged due to the horrendous muddy conditions the riders found themselves in. Coma of course was first to reach the red flag as victor of the race. A fifth victory is a massive achievement, and spanning over a long period when the race has changed so considerably; different continents, different engine capacities and changes in the competition.

“The conditions on the final day were very hard. The tyres we have are for the desert, we have heavy bikes and the conditions were dangerous. I was really focused to find a good rhythm, because in those conditions it’s easy to fall, and when I saw the red flag I was like ‘wow’ now it’s finished.”

“Every year is difficult, and the race is close. The other teams are pushing hard, but we are still at the top. It’s also the first time I’ve won two consecutive Dakars, which is great. My first victory was in 2006, which was a long time ago, when the race was in a different continent, with a completely different bike, and it’s positive that we can survive all of these changes. This gives me a good feeling and makes this win even more special. If you look at the picture from that time to now it’s completely different.”

“We always knew Paolo and Joan would be strong competitors, and their level from the world championship, so I expected them to be close all the way through. It was not a surprise for me, but the result is something we are proud of.” 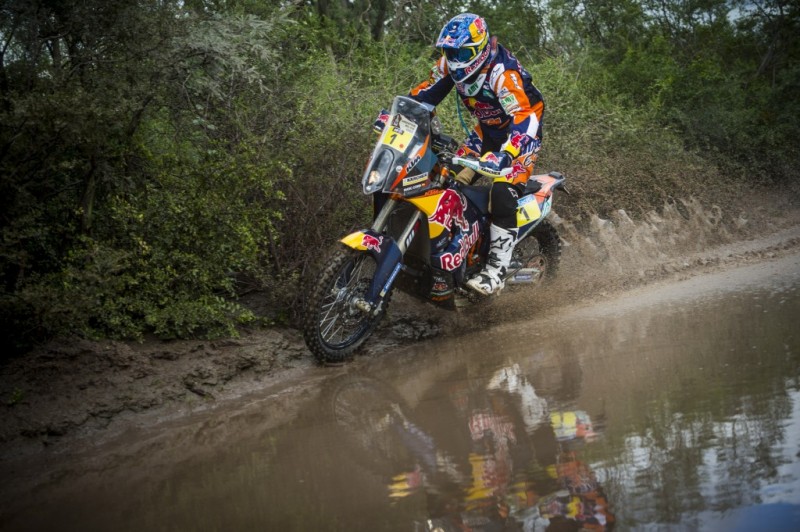 It’s a team affair though and while Jordi Viladoms was runner-up last year, he helped Marc once again until he was forced to retire on that notorious salt flat stage. Marc explained how important the teammates are in the Dakar.

“Jordi really helped me a lot in the first marathon stage, and right through the race until he had to stop. He was a big help for me and then also Ruben (Faria) was helping me a lot when he was close to me. But it’s also true that some days I was alone in front of all the Honda team. In the end we are on the bike, and it’s important that the race was still played fairly. Nobody made crazy things, or did stupid things like making dust, so from a sporting side I think this is important, because this is the spirit of the Dakar.”

A clip of Marc has been shown virally around the internet on social networking of Marc stopping to take a ‘selfie’ with a fan, which may surprise some people, as he’s racing! But Marc is truly a man who takes care of the fans and he explained what happened.

“Yes. It was a surprise because I didn’t think anyone was filming it! I saw one paper with my name at the side of the road and it was in the liaison and not under pressure. Of course in the stage I cannot stop like that, but in the transfer I had some time and it was nice for the fans!”

For the rest of the KTM team there were celebrations and disappointments for the riders. Britain´s Sam Sunderland went out early after winning a stage, Matthias Walkner from Austria won a stage in his rookie year and was a top-ten rider until he retired with altitude sickness, while Australian Toby Price took a podium at his first attempt. Marc is pivotal in helping the next generation of riders for KTM, as he trains and rides with them leading into the Dakar race, and he explained how he feels the young riders have a lot of potential for the future.

“Dakar is like that. You make a mistake like that and you pay for one year. It’s a pity because Sam has a big potential, but in the end he made a mistake and he paid a high price for that. He’s young though, and he will have a lot more Dakar races in front of him. He doesn’t need to add pressure because of that and in the end the only point we can make is he still has some learning to do.”

“I also have so much respect for Toby. To get on the podium in the first year as a rookie, wow, big respect. You can understand a little bit the potential he has; the first time in the race and he’s on the podium, plus he’s very consistent. With Matthias he started very hard and pushing a lot, so he got some good results, but in the end he paid for that also. His energy was going down and I think he got a big picture to understand the race, plus how to make a better preparation for next year. With the results he did get I think we can see his potential. I think we have to be quietly confident that there’s a good future in the KTM team.” 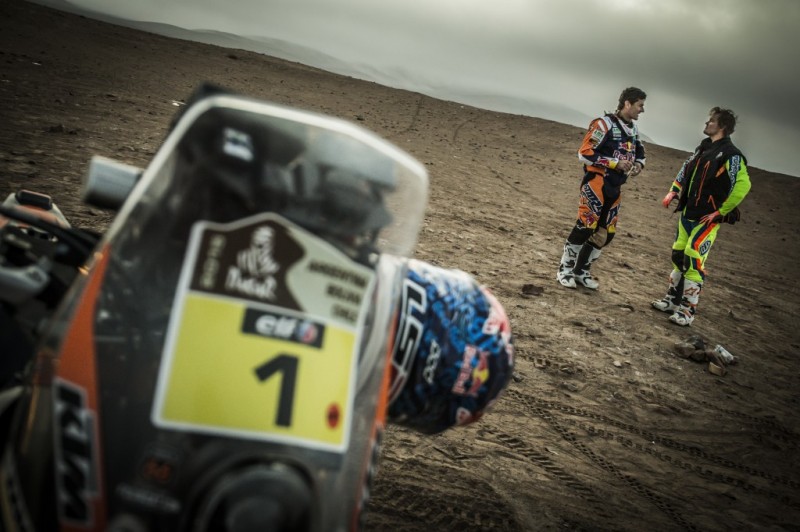 KTM is proud of its achievement in rally, which remains at the very heart of the company from the days that Heinz Kinigadner raced in the 90’s. Marc is quick to point out how important it is to have a good team, as they also have a lot of work with little sleep.

“Of course a big part of this victory is the work from the team, especially when you see how the bike arrived at the end of the stage. Particularly with the salt flats, the bike was rebuilt 100% completely. They changed all the pieces they can change with the rules so we didn’t get a penalty. To go to sleep and see only the frame there, and you can say wow this is our team and they are working hard.”

“14 victories is amazing. KTM has to be very proud, as it’s a lot of work. From the start the spirit that the rally department has created with Hans Trunkenpolz all those years ago is still alive with Stefan (Huber) and all the guys working on the project. It’s this motivation that is really important.” After returning from the race Marc has been busy with the media and all of the requests to congratulate his good work. He’s looking forward to planning for the year, visiting the KTM headquarters in Mattighofen, Austria followed by a well-earned break.

“It was a busy week after Dakar. After taking the victory it is nice to come home, but there’s always a lot of things to do here in Spain with visits, the journalists, and I’m still doing that, but I hope at some point next week I can take a break to clear my head and to recover the energy. With the body I’m feeling better and better. I can sleep and I feel better than last week, but from the mental side I need a break. Every day talking about the same things, and I have to make a complete break to process what’s happened.”

“The plan is to go to Mattighofen to visit all the KTM people that were not in the Dakar, and to have some meetings to make a plan for the development side for the year. I also have to prepare the season and everything, so this is the main point before I’ll take some holidays. Then it all starts again!”

68 Responses to Interview with Marc Coma: The Dakar warrior returns with a fifth trophy