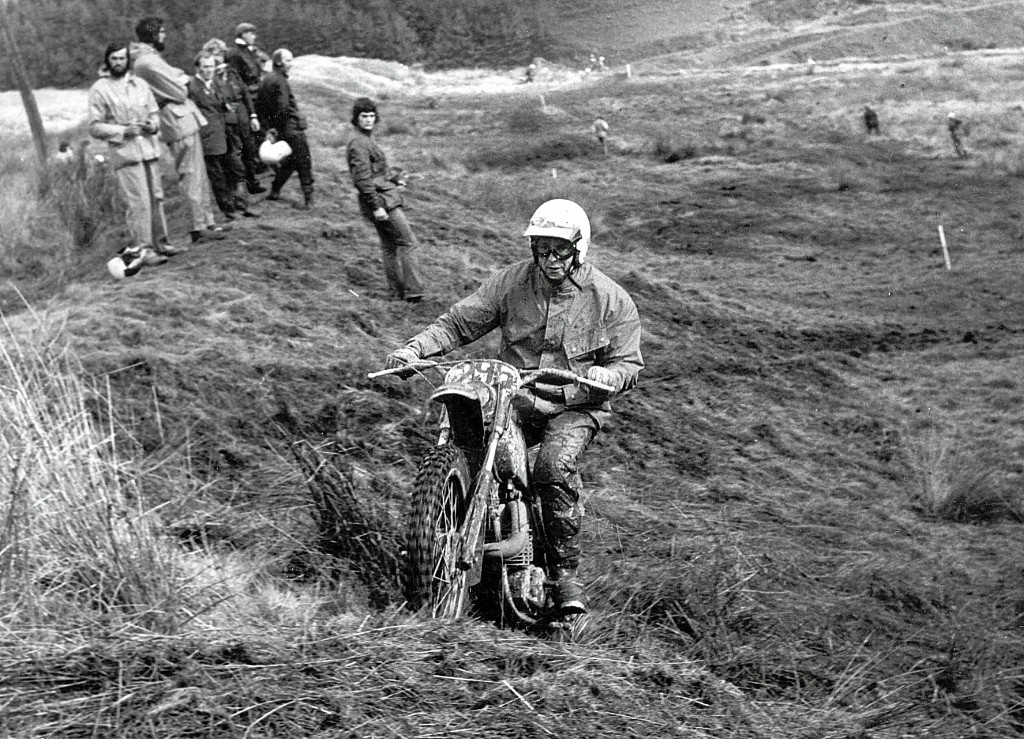 Anniversary on the Isle of Man – the 50th International Six Days Trial was held on the island in the Irish Sea forty years ago. After six really tough days, out of the 300 riders taking part, the one doing best in the points was sat astride a KTM. Heino Büse, whose riding style led him to being better known to his sporting comrades as “Düsen-Büse” (jet-powered Büse), rode in the half-liter class for the team of German importer Toni Stöcklmeier. 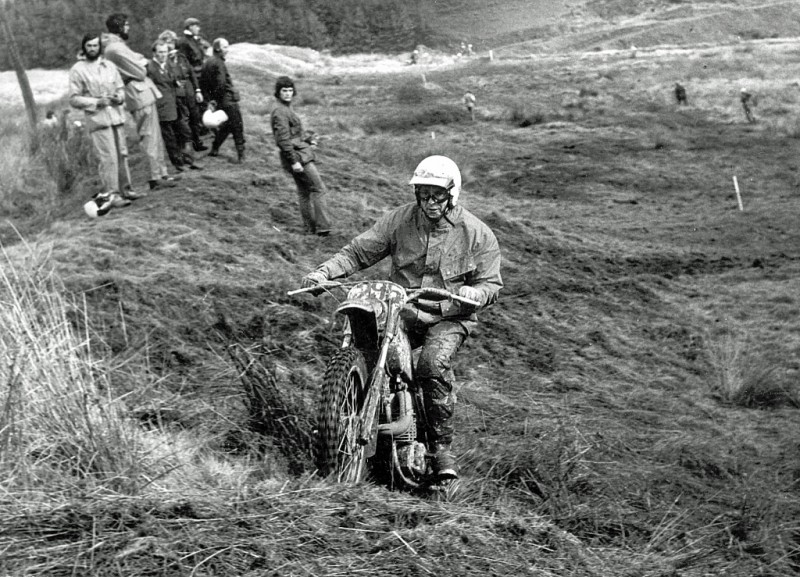 The very first Six Days Trial was hosted 62 years beforehand by Carlisle in the English Lake District. From August 18 to 23, 1913, riders in the International Six Days Reliability Trial battled their way through the terrain. The Six Days Trial was always a team event, in which participating nations competed for the Trophy or the Silver Vase, today’s Junior Trophy. Apart from wartime interruptions, the International Six Days Trial has taken place every year since. With the Isle of Man already having staged the “Olympics of Motorcycle Racing” in 1965 and 1971, the FIM decided in favor of the hilly island measuring only approximately 50 kilometers in length and 22 kilometers across for the anniversary edition as well.

The GS machines from KTM had for some years been serious opponents for the previously dominant brands from the former Eastern Bloc, with Italian Imerio Testori winning the first European Championship for KTM in 1974 (there has only been an Enduro World Championship since 1990). At the 1975 Six Days, around one in four of the 307 starters placed their faith in a KTM or Penton machine; in hindsight, a remarkably high proportion, given that the field consisted of bikes from no less than 30 different manufacturers, including such long forgotten brands as BPS, CZ, Monark, and Rokon.

Heino Büse started in the 500cc class on a 350 rebored to 352cc and made people sit up and take notice from Day 1: fastest time of the day for the German! While the first two days were used for “orientation,” things became really difficult from Day 3 onwards. Bad weather, boggy ground, and tough time limits gave even the best of riders something to think about. By Day 6, almost half the field had dropped out, but Heino Büse managed to retain his lead to the finish. Out of all the riders, he had the lowest points total in the end. He was also the best in the half-liter class.

The German KTM importer at the time, Toni Stöcklmeier, had a stroke of luck when he brought the career soldier to his team in 1973. Büse attracted attention for the first time at the Six Days Trial in the Swedish town of Karlskoga in 1966, when he won the club classification together with two companions as a member of a military team. Appearing in uniform, the team was presented with the trophy by a likewise uniformed Russian admiral. Something like this was only possible during the Cold War in Offroad sport.

In the years that followed, Büse competed quite successfully on various brands, but his big breakthrough didn’t come until Toni Stöcklmeier brought him to the KTM team. Best German rider at the 1974 Six Days Trial in Camerino, Italy, German Offroad champion 1975 and 1976 in the half-liter class, best individual rider at the Six Days Trial on the Isle of Man, and winner of the 350cc class at the 1976 Six Days Trial in Zeltweg, Austria are Düsen-Büse’s outstanding successes on KTM machines. Today, Heino Büse is a successful businessman and proprietor of a wholesale company specializing in motorcycle clothing and accessories. 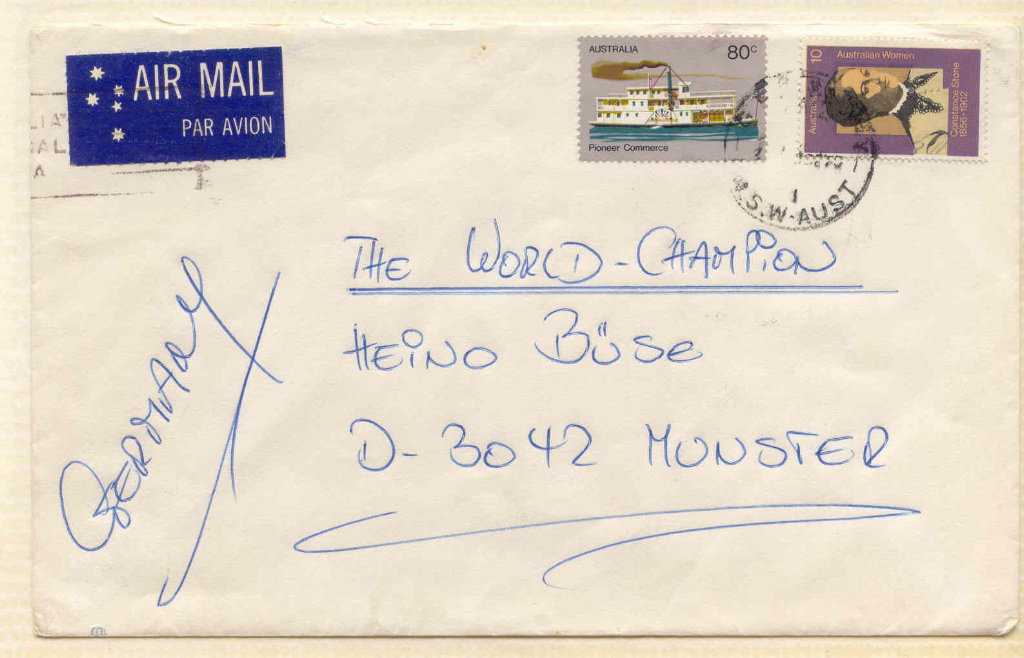 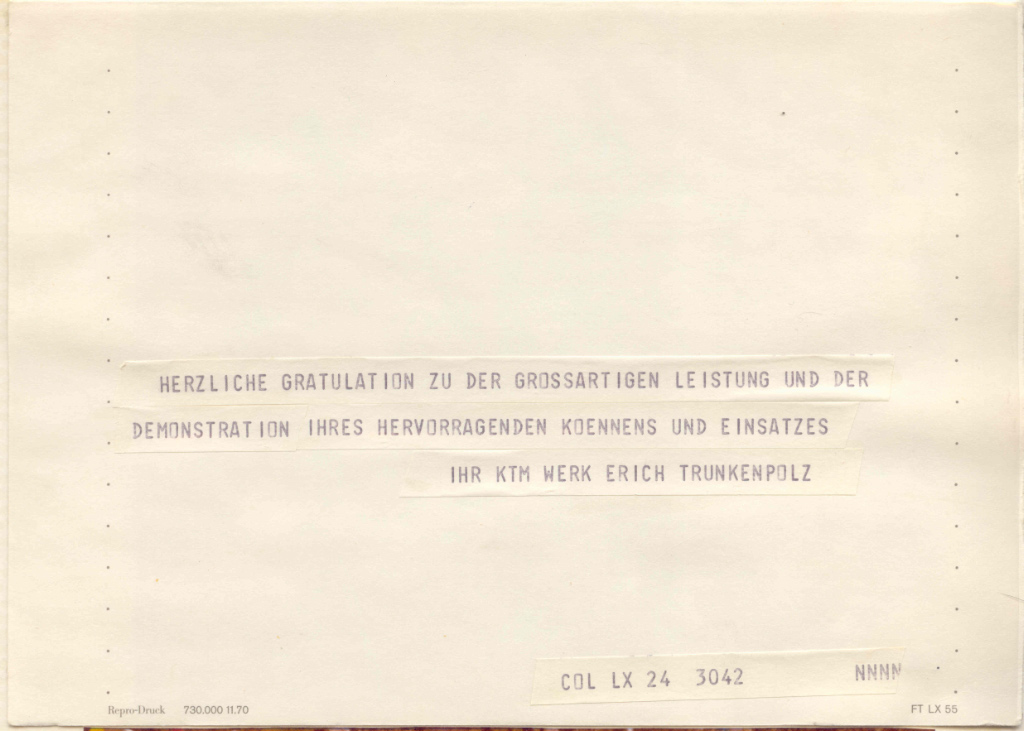 But it wasn’t only the exceptional German rider who made life difficult for the Czechs and East Germans, who had been so accustomed to victory in the half-liter class. In 1975, Frantisek Mrazek and Jiri Stodulka’s dominance of the quarter-liter class, which had lasted since 1969, was ended by Alessandro Gritti when he took the European title. Elia Andrioletti also threw his hat into the ring to wrest the title in the 175cc class from Erwin Schmider, the 18-time German Offroad and 6-time European champion. Although this was “only” sufficient for runner-up in the 1975 European championship, one year later KTM also put an end to the Zündapp era in the 175cc class.

1975 was the year when KTM caught up with the top brands in modern enduro sport. The Italian team run by importer Arnaldo Farioli and the German Stöcklmeier team competed in all classes from 125 to 500cc with talented young riders hungry for success, thereby laying the foundation stone for KTM becoming today’s most successful brand in the European and World Enduro Championships with well over 60 rider titles.