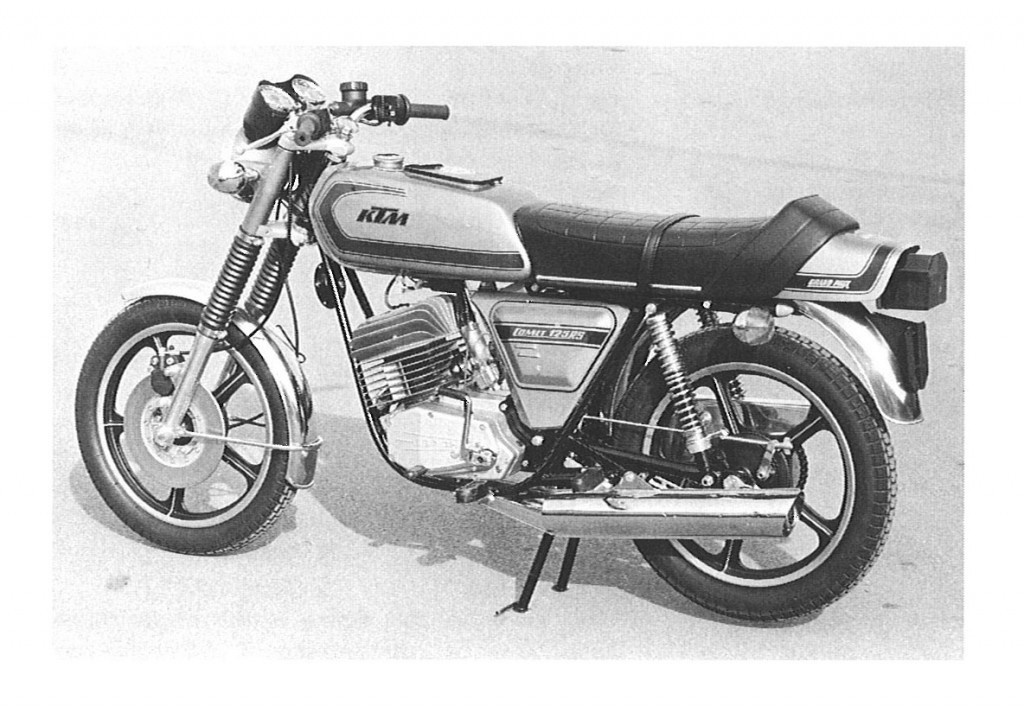 “A new racy sports model from Austria! For the first time, KTM presented a real sports machine for the road at the 1975 Vienna International Spring Fair!” The author of these enthusiastic lines was no less a figure than Dr. Helmut Krakowizer, generally known as the “Motorcycle Professor”.

And the “professor” wasn’t exaggerating. The new KTM Comet Grand Prix 125 RS was a real eye-catcher. Painted in classy metallic gold and black, it was reminiscent of the John Player Lotus Formula-1 racing cars that were so successful in the 1970s. The black 17″ cast magnesium wheels were also pretty eye-catching. Equipped with a high-quality Ceriani telescopic fork and a large front disk brake, the Comet looked more like a grown-up motorcycle, while the German rivals were unable to conceal their decent from 50cc mopeds. Propulsion was provided by a Sachs type 1251/6D engine. Weighing in at less than 27kg, the little powerhouse was well-fed and applied 17hp to the road via a six-speed transmission. 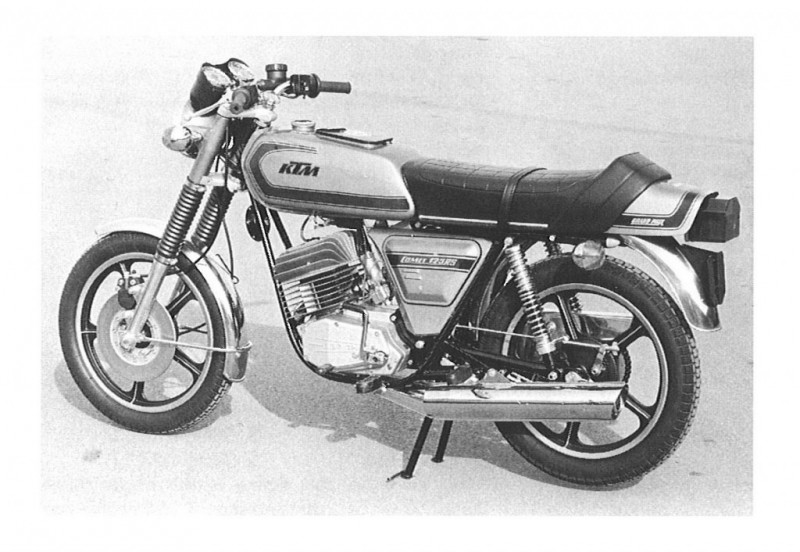 Those wanting to ride a 125cc Comet back then needed to be at least 18 years old and have the “big” motorcycle license. The 125cc mopeds, which can be ridden by 16-year-olds today, didn’t come along until later. Naturally, you could have climbed straight onto a larger bike than a 125, but motorcycle insurance premiums were very costly in the 1970s, so practically every manufacturer had a 125cc model in its range as well. Furthermore, there were enough fans of the popular 125cc class, whose idols included Grand Prix stars Dieter Braun, Angel Nieto, and Kent Andersson, and for whom naturally only a fast 125 came into question. It was no surprise that the Comet’s model name was supplemented with “Grand Prix” and “RS” for “Rennsport” (motor racing).

KTM was one of many manufacturers affected by the crisis that hit the two-wheel market at the end of the 1950s – many people could meanwhile afford a car and the motorcycle soon acquired the reputation of a “poor person’s vehicle.” KTM ceased motorcycle production in Mattighofen in 1960 to concentrate on autocycles, scooters, and 50cc Comet mopeds, which could be ridden by 16-year-olds and for which high sales figures were expected. Although at the time there were officially no bikes bigger than 50cc in the range any longer, KTMs with 100 or 125cc frequently turned up at various offroad events.

The later Italian importer, Arnaldo Farioli, attracted attention at the 1966 Six Days Trial in the Swedish town of Karlskoga, when he started on a 100cc machine. Because it had the same fastening points as the 50cc engine, the larger, four-speed Sachs engine could easily be installed in a standard Comet frame, and it wasn’t long before this happened. A scrambler with the 100cc Sachs engine was sold in the USA as a “Hansa” for marketing reasons, but several Comet 100s also found their way onto Austrian roads.

When, in late 1967, a small offroad machine was designed for the American market at the suggestion of John Penton, the decision fell in favor of the new Sachs 125cc engine that had been presented shortly beforehand at the Milan Motorcycle Show. Similarly to the four-speed 100, there were now also KTM motorcycles with 125cc apart from the offroad machines, although these were intended primarily for export. 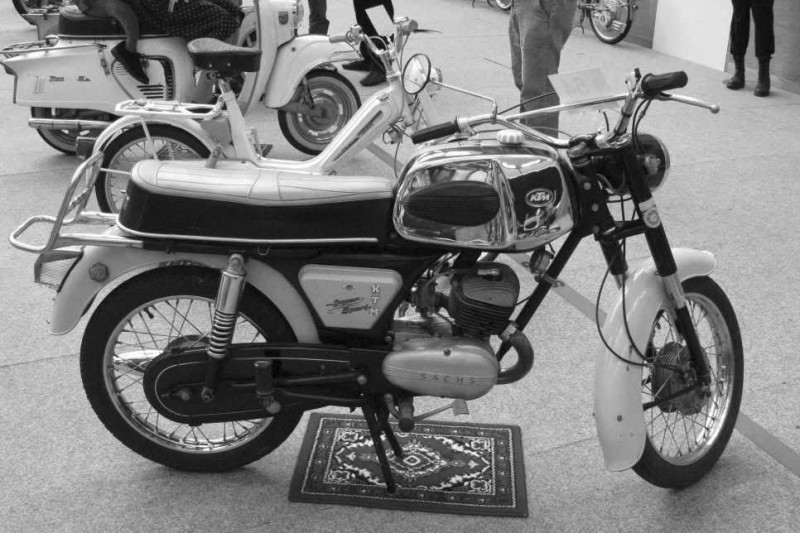 The late 1960s saw an end to stagnation in the two-wheel sector and the motorcycle was rediscovered as a piece of sports equipment. It was obvious that KTM wanted to upwardly expand its 50cc product range with a sporty 125cc machine for the domestic market as well, especially as the power unit had already proven itself in the KTM sports bikes. With a double-cradle frame, magnesium wheels from the world of racing, and a big Grimeca disk brake up front, the Comet Grand Prix 125 RS was significantly better equipped than the Nuremberg or Munich-based competition. And with the rear drum brake having been replaced with a Brembo disk brake during the course of model updates, the KTM was the gold standard in the 125cc class. Today the “Grand Prix” still in existence are lovingly restored at great expense by enthusiasts and their treasures sparkle as they did 40 years ago at the Vienna Spring Fair.

There was no direct successor for the Comet Grand Prix 125 RS, but several interesting machines appeared on the road over the years. The so-called “Wartbichl KTM” was a prototype fitted with the water-cooled engine from the LC 1 Enduro, but it remained one-of-a-kind. Visually, the 1998 Sting 125 was modeled on the Duke 1. With output of 15hp and weighing 121kg, the “two-stroke Duke” could also be ridden as a moped by 16-year-olds. 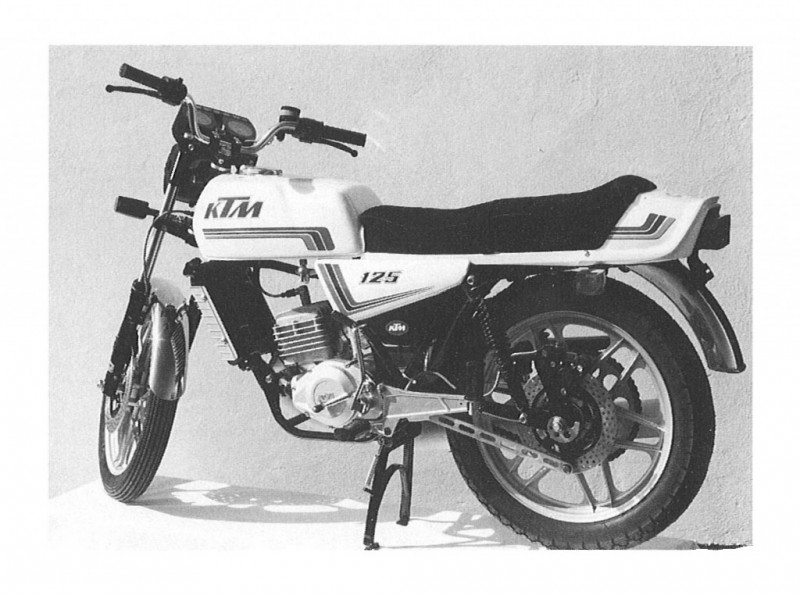 Today KTM has a fascinating 125cc motorcycle in its product range again in the form of the RC 125, the entry-level machine for racing enthusiasts. The state-of-the-art, liquid-cooled, DOHC engine outputs 11kW (15hp), generates 12Nm of torque, and offers fully fledged racing performance for everyday use. Although the RC 125 does not bear the “Grand Prix” epithet in its model name, the genes of the RC8 superbike cannot be overlooked. And the best thing is that you don’t have to wait until you’re 18 to ride the RC 125, you can jump on at 16. 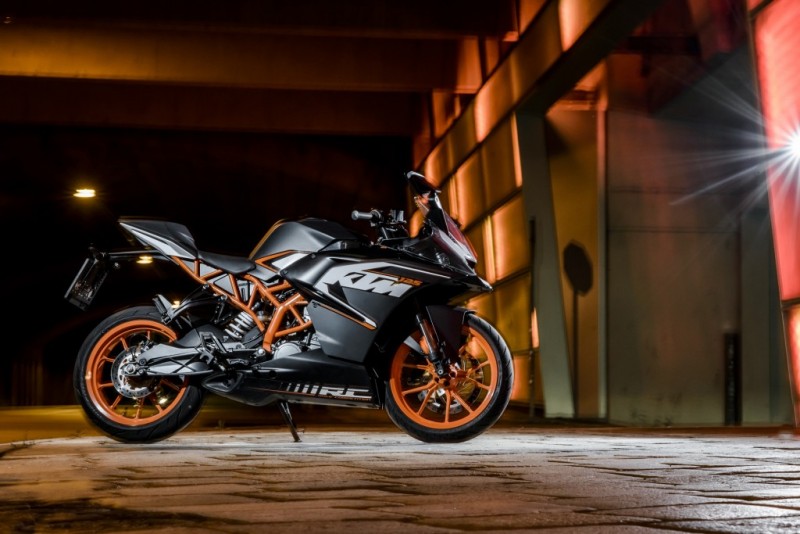