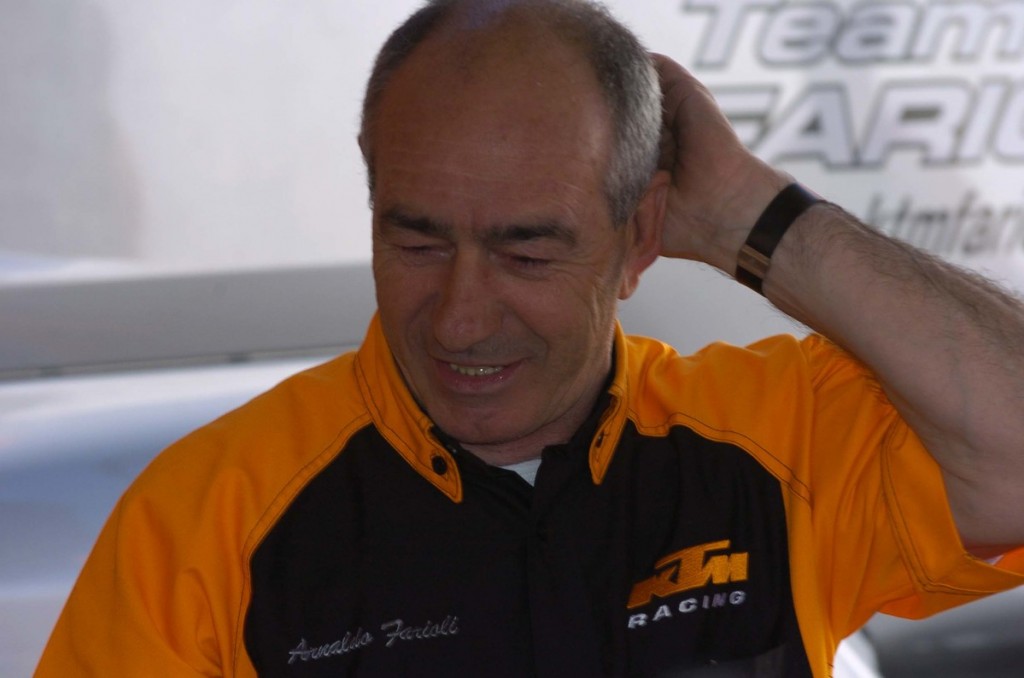 The KTM Factory Team for the Enduro World Championship 2016 was introduced in Arco Di Trento in Italy at the start of March – keen observers will certainly have noticed the Farioli logo on the riders’ jerseys. Farioli – the name is synonymous with fifty years of Enduro sport success. And exactly forty years ago, Farioli’s riders enjoyed a double success in what was at the time the Enduro European Championship. And what’s more, KTM ended the dominance of the German Zündapp Team that was once thought to be invincible in the small classes. 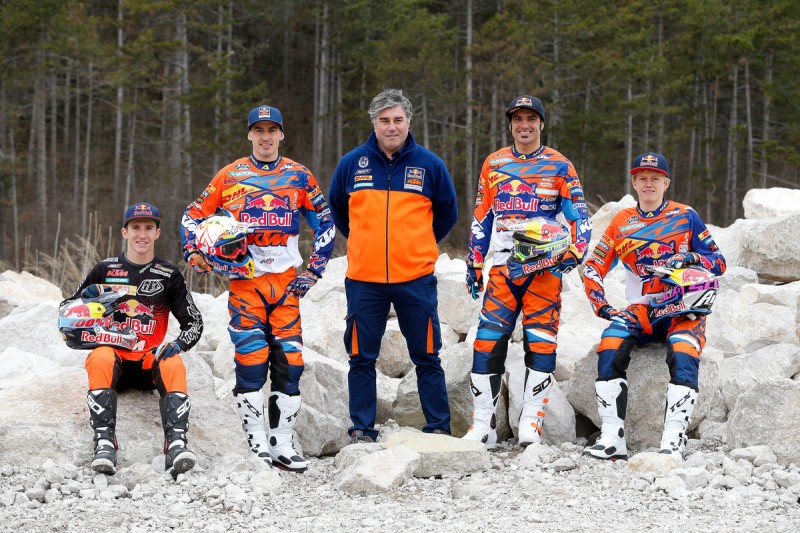 But the European Championship win in the 125cm3 and 175cm3 classes was not exactly unexpected. In 1974, the Italian Imerio Testori had achieved KTM’s first international success in Enduro sport by winning the 500cm3 European Championship. One year later, Alessandro Gritti donned the 250cm3 crown, taking over from Czech motorcycle manufacturer Jawa, which had got used to success over the years. In the 175cm3 class, Elio Andrioletti had put enormous pressure on the five-time European Champion Erwin Schmider, who ultimately was only able to save his sixth title by a very narrow margin. With great foresight, Zündapp team leader Erich Messner then took his star rider out of the firing line and in 1976, moved him into the 50cm3 class.

After ceasing motorcycle production at the end of the fifties, KTM continued to take part in the reliability sport of the time. This involved hand-made factory bikes with the popular 50cm3 Sachs engine, and occasionally with the bigger 100cm3 Fichtel & Sachs engine as well. But these machines were never available to buy. This situation only changed in 1968, when John Penton from Ohio had KTM build motorcycles for the American market. The 100cm3 and 125cm3 bikes were sold in the USA as Penton Berkshire and Six Day, and they were made available in Europe as the KTM GS 100 and GS 125 by the Italian importer Arnaldo Farioli, who rode KTM machines in the sixties and was a successful offroad sportsman in his own right. Because these lightweight machines were particular best-sellers in the USA, the range was expanded upward by a 175cm3 version in 1971, followed two years later by a 250cm3 version. Instead of the Sachs engine, they now used one designed by KTM, in a modern, chromoly tube chassis. The engineers had done a really good job and the unit construction engine was designed for versions up to 500cm3. The home-grown engine also brought the first international successes in motocross and Enduro sport. 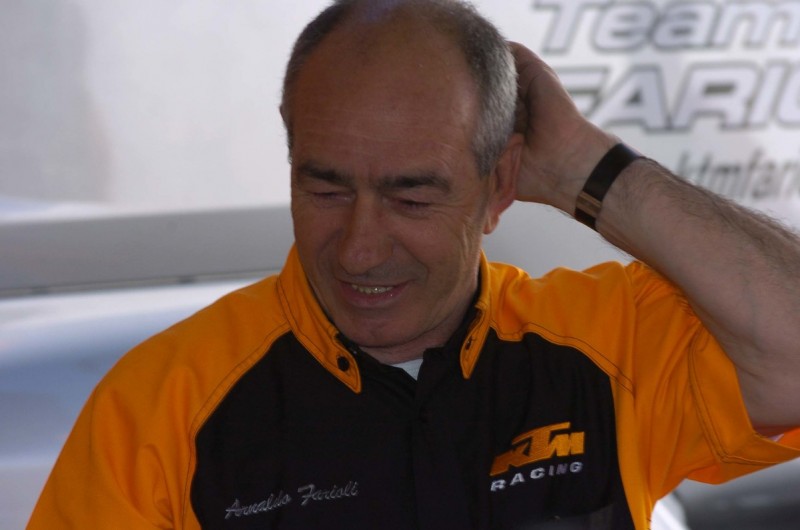 While motocross sport was run from the Mattighofen factory, participation in the Enduro European Championship was organized through the Italian and German importers Arnaldo Farioli and Toni Stöcklmeier. Farioli had a number of irons in the fire, and they were all heating up nicely. This was to become apparent in the first European Championship race in Troyes. In the little town in the French Champagne region, against an imposing backdrop of spectators, Farioli riders Mauro Miele (100cm3), Alessandro Gritti (125cm3) and Elio Andrioletti (175cm3) put the fear of God into Zündapp riders who were used to victory, and won their classes, while Heino Büse from the Stöcklmeier Team came second in the larger class. 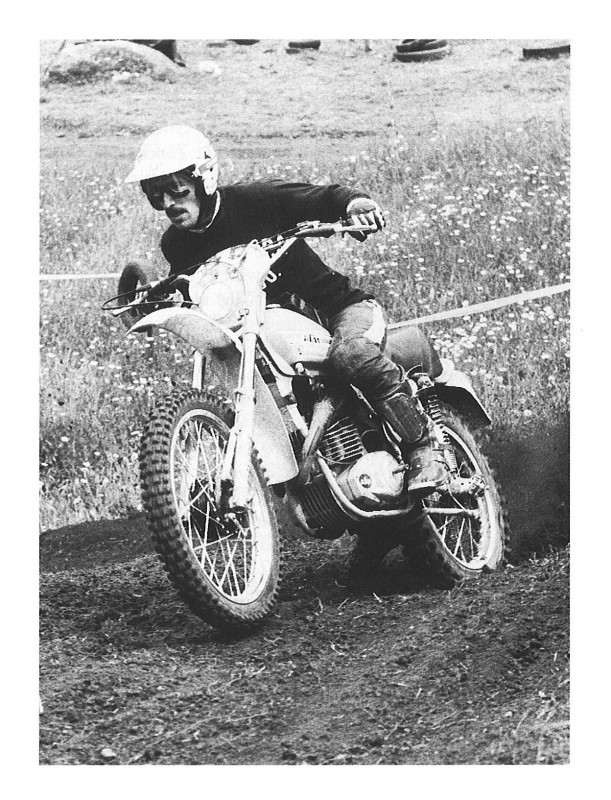 29-year old Alessandro Gritti from the Italian Enduro stronghold of Bergamo, the seven-time Italian Enduro champion and reigning 250cm3 European Champion, held an unassailable lead with four victories in the class after Valli Bergamasche and was already certain to be the European Champion. With three victories in the class to his credit, 25-year old Elio Andrioletti, who like Gritti also came from the Bergamo area, traveled to Austria for the penultimate race. Although Zündapp had put several top riders into the 175cm3 class to support Eddy Hau and take away valuable points from Andrioletti, as well as giving Hau at least a theoretical chance of winning the title, the five-times Six Days participant from Italy didn’t miss a trick, effortlessly winning all the special tests ahead of Hau and, just like Gritti, becoming the early winner of the European Championship crown. It then got really exciting in the 250cm3 class, where KTM was defending the previous year’s title. It looked for a long time as if Augusto Taiocchi would be the next European Champion in the 250cm3 class, but in the penultimate race, his nerves got the better of him and he hit the dust. This meant that the final race in Poland was a showdown between Taiocchi and the Czech Jawa rider Jiri Stodulka, who had a whole armada of team colleagues to support him. At least Taiocchi was able to secure the runner-up position.

It was just as exciting in the larger, over 350cm3 class, where the outcome was also decided between KTM and Jawa. Heino Büse from the German Stöcklmeier team, or Stanislav Zloch – at the end of the second touring day, Zloch was just 10 seconds ahead of Büse, making him second in the European Championship. 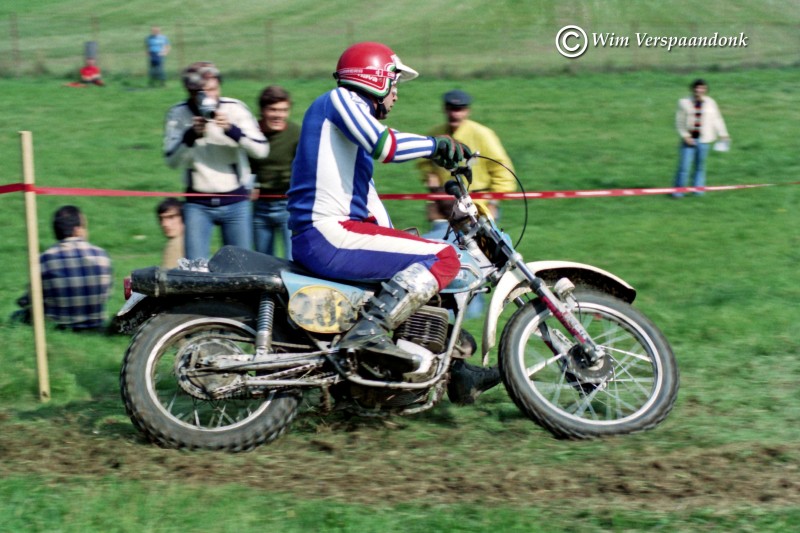 Expectations were high in the autumn as the teams traveled to the Six Days Trial in Styria, Austria. 324 riders had traveled from all over the world to the “Olympics of Motorcycle Racing” at what is now the Red Bull Ring, including no less than 100 KTM and Penton riders. Virtually every third rider sat astride a machine from Mattighofen, a dominance that is all the more impressive if you consider that almost 30 different bike manufacturers were represented in the field, from A (IM) to Z (ündapp), although most of them have long since been forgotten. Yet another notable Six Days achievement for Alessandro “the Great” Gritti! At the end of the six days, he and his 250cm3 machine had been the fastest duo of all 324 riders. And the German Stöcklmeier team wasn’t doing too badly either: Harald Strößenreuther, in the 125cm3 class, and Heino Büse, in the 350cm3 class, were victorious.

The “super test” on the beach of Agadir on the second weekend of April marked the start of a new era in Enduro sport. Almost exactly a quarter of a century after the Enduro World Championship came into being, the former “reliability sport” was upgraded to the Enduro Grand Prix, just like in road racing, many decades ago. The 15 best riders from E1, E2 and E3 were given points for a Grand Prix rating across all classes. Fabio Farioli, an Enduro World Champion on a KTM bike in 1993 and the current team leader of KTM Enduro Factory Racing, can be content. After a dusty start in Agadir, North Africa, the two rookies in the E1 and E2 classes, Nathan Watson and Taylor Robert, were able to join the front runners in the second Enduro GP in Gouveia in Portugal and showed that they are a force to be reckoned with in terms of the World Championship title, by achieving one second and one first place. The new season promises to be very exciting!

83 Responses to #inthisyear1976: International success for the Farioli Team