Statistically speaking, you spend 22.37 years of your life in bed. Another 16.63 years are spent at work and you’re ill for 4.29 years …. That leaves about 5.2 years for DUKE riding. All in all, not too bad an outlook. Just DUKE it! Advertising for a motorcycle may have been unusual 20 years ago, but so was the motorcycle. 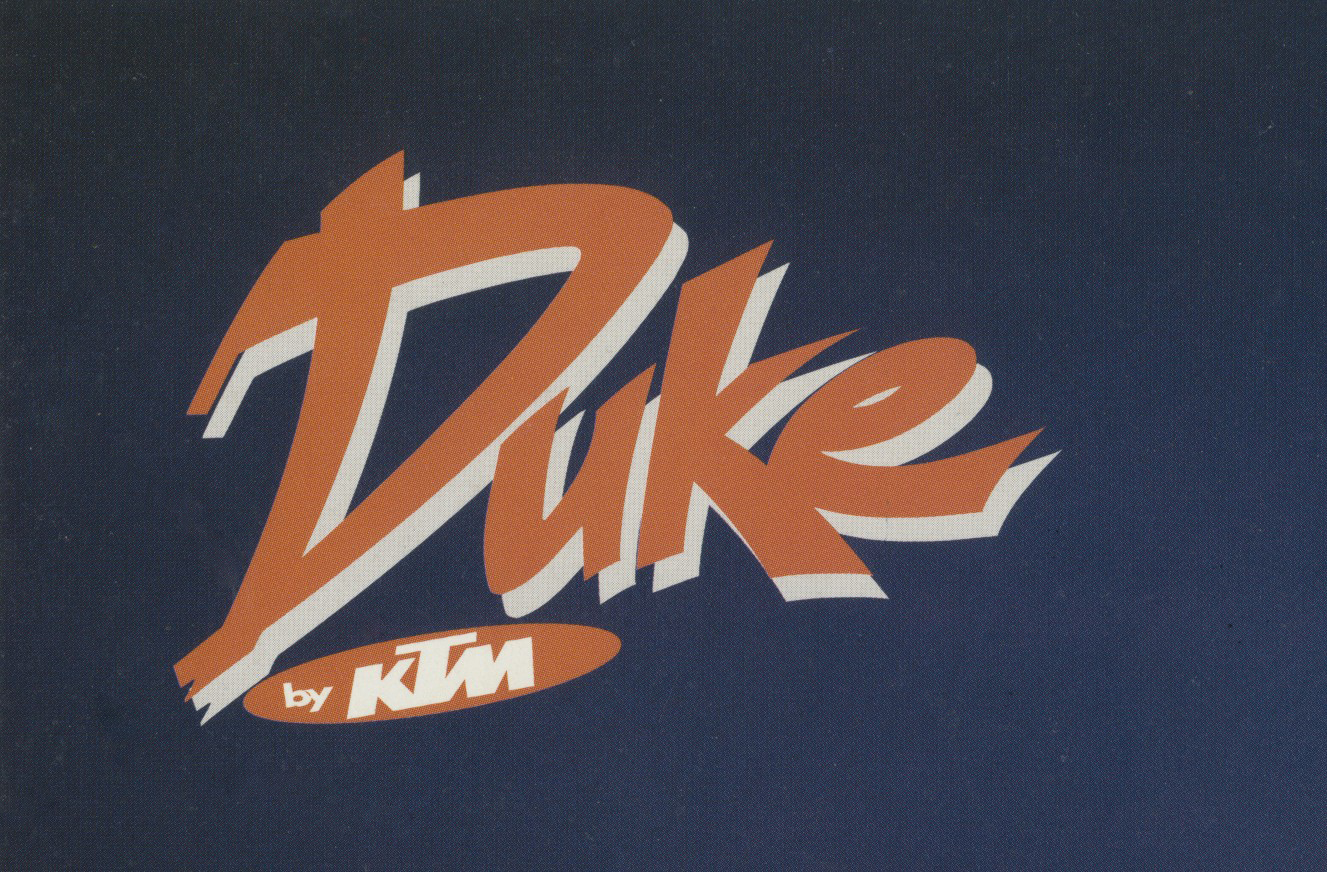 KTM was relaunched under new management in 1992, following the failure of KTM Motor-Fahrzeugbau AG. The Development department worked flat out on new concepts for the future. One of these projects aimed to produce a fun bike for the road, powered by the state-of-the-art, water-cooled, LC4 single-cylinder from the competition enduro. The vehicle project name back then was “Terminator”. It was designed to roll on 17-inch tyres, a 300-millimetre front brake disc provided the necessary deceleration and high-quality WP components promised a curve-bandit par excellence. 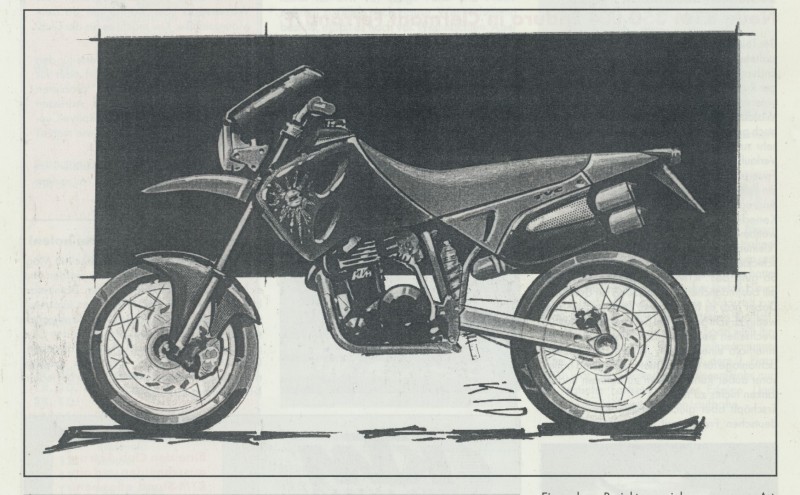 Two weeks before it’s presentation, the as yet anonymous exhibition bike still lacked a distinctive name, remembers project manager at the time, Wolfgang Felber, whose personal favourite was “Quasar”. “DUKE” was also on the list of suggestions, in memory of Geoff Duke, the six-time world champion, who was virtually unbeatable in the early 50s on the legendary Norton single-cylinder machines. On the stairs, on his way to the executive floor, Wolfgang Felber bumped into Kalman Cseh, who was responsible for such things at the time, and showed him the list. “DUKE” met with Cseh’s immediate approval, although he was thinking of “DUKE” as in a high-ranking noble, rather than the British racer. Consequently, “The DUKE” appeared on the cool stickers that the artists had designed – not bad either, seeing as “The DUKE” was the English multiple world champion’s nickname.

A large proportion of the single-cylinder fun bike’s components originated from the LC4, although their hard enduro origins were barely perceptible. A striking front fairing with ellipsoid twin headlights and orange metallic paintwork gave the DUKE an unmistakable appearance, for which Gerald Kiska was responsible. Kiska, who as a young Austrian designer won a KTM invitation to tender, has since bestowed every KTM with its identifying features.

The DUKE entered into series production exactly 20 years ago. The displacement of the LC4 engine was increased to 609cc and, with 50hp, the 620 DUKE was the most powerful single on the market. The DUKE chassis consisted of the very finest components. The upside-down forks and White Power shock absorber with progressive damping offered numerous setting options. Together with a four-piston fixed calliper from Brembo, the 320mm brake disc ensured the bike was brought safely to a standstill. Weighing only 143kg on the road, the DUKE was fitted with 120/70-17 and 160/60-17 tyres – today still the standard ‘footwear’ for most Supermotos and the latest DUKE. 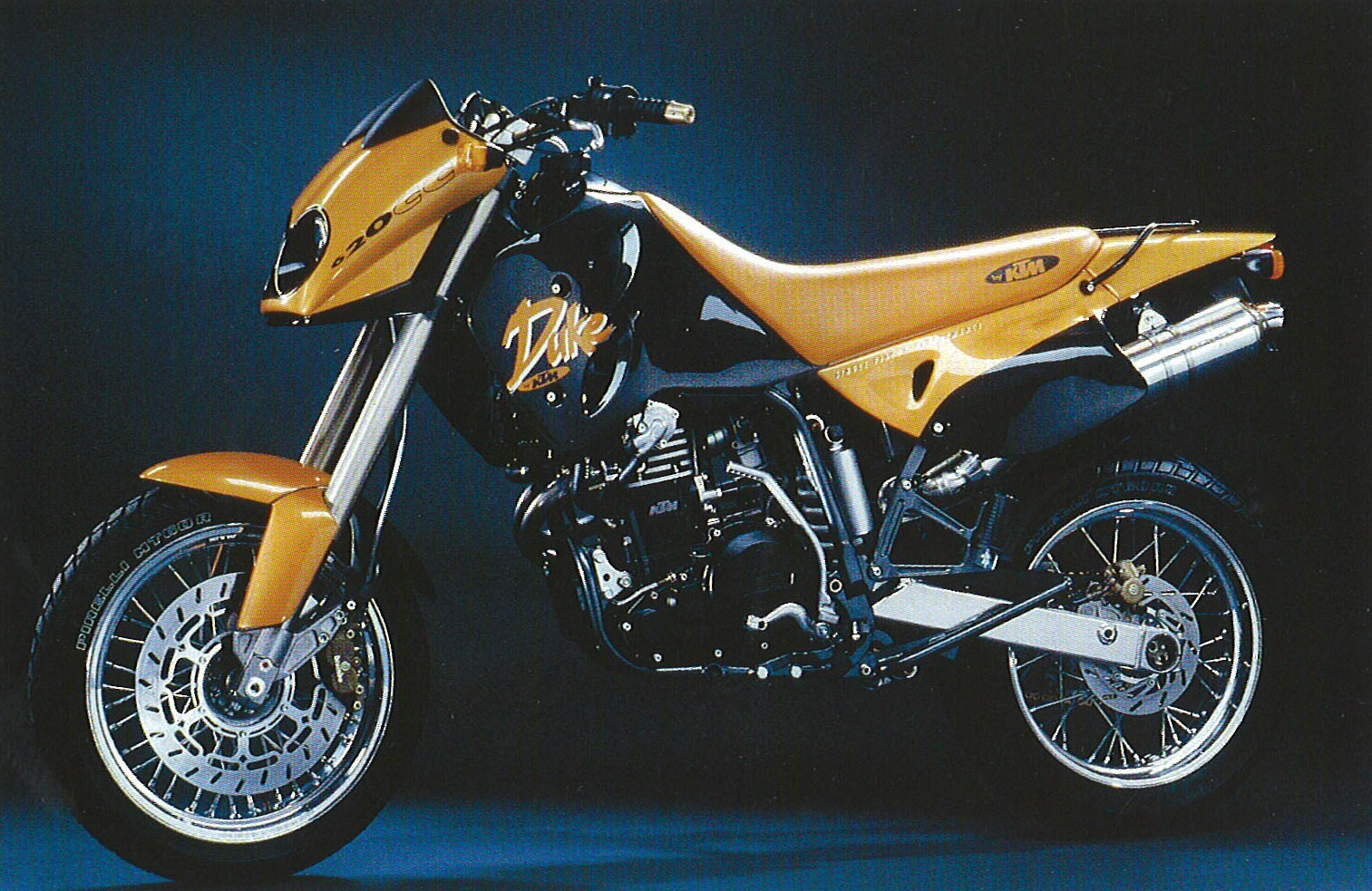 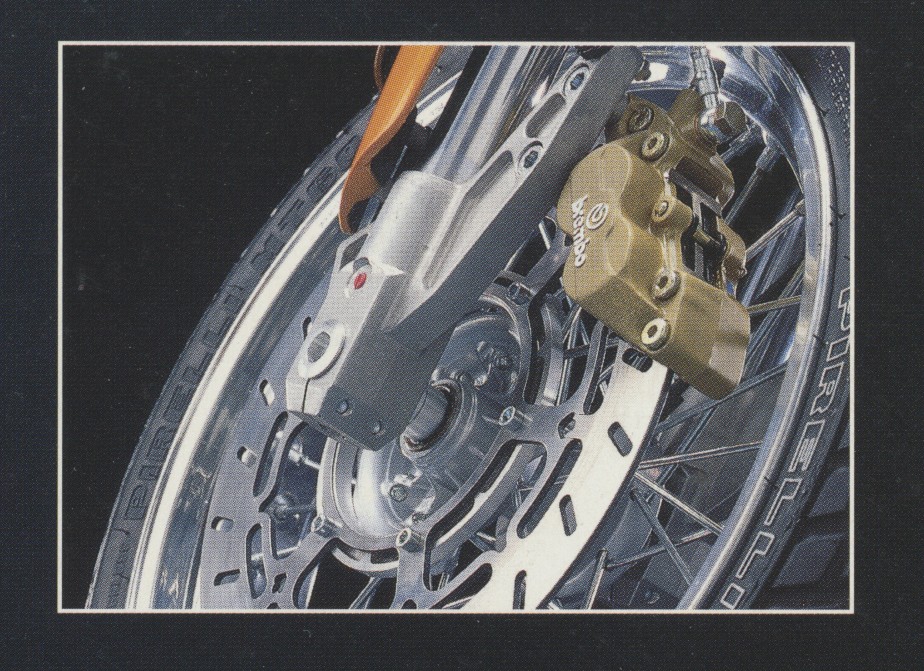 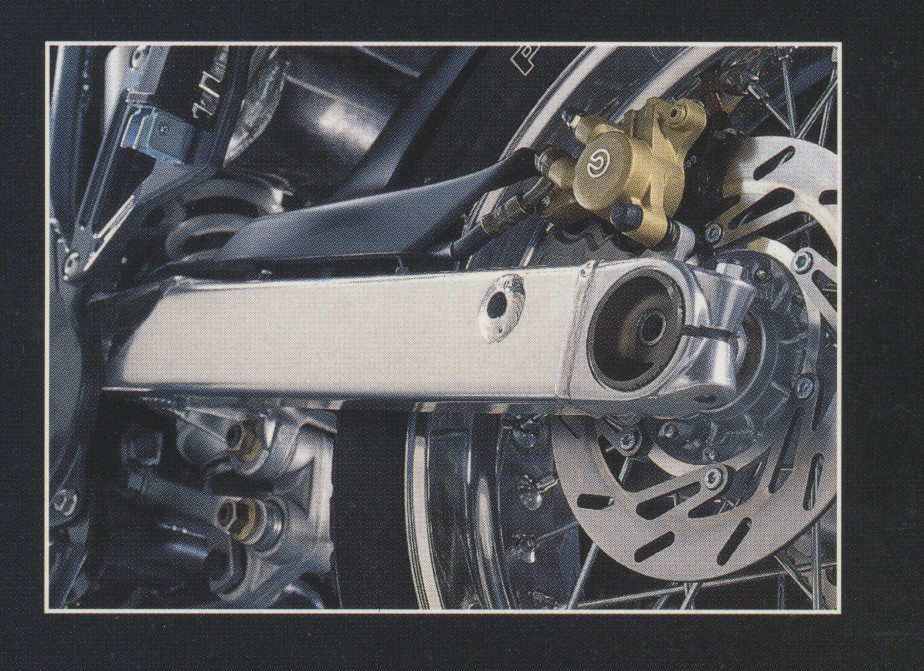 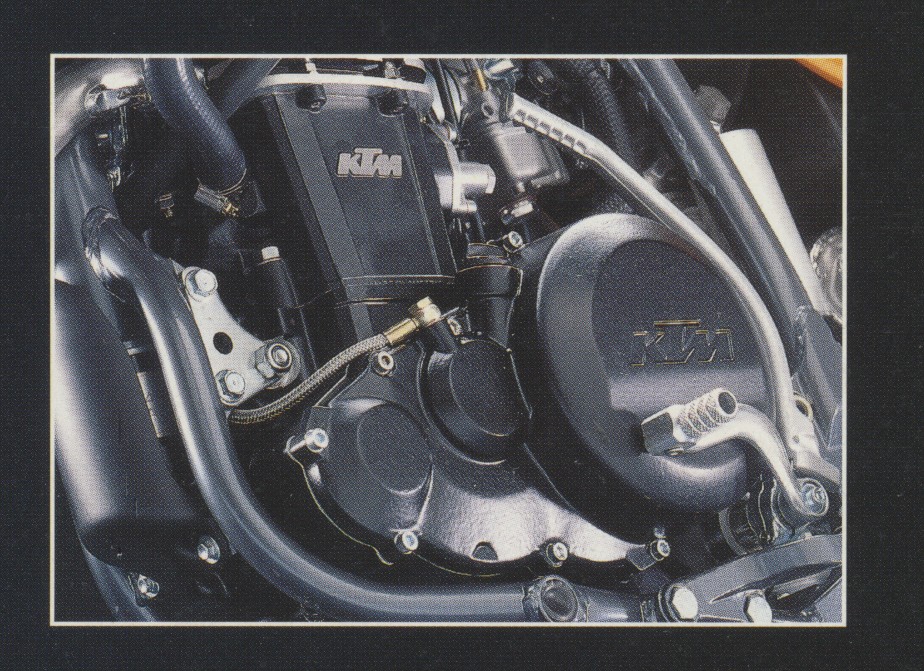 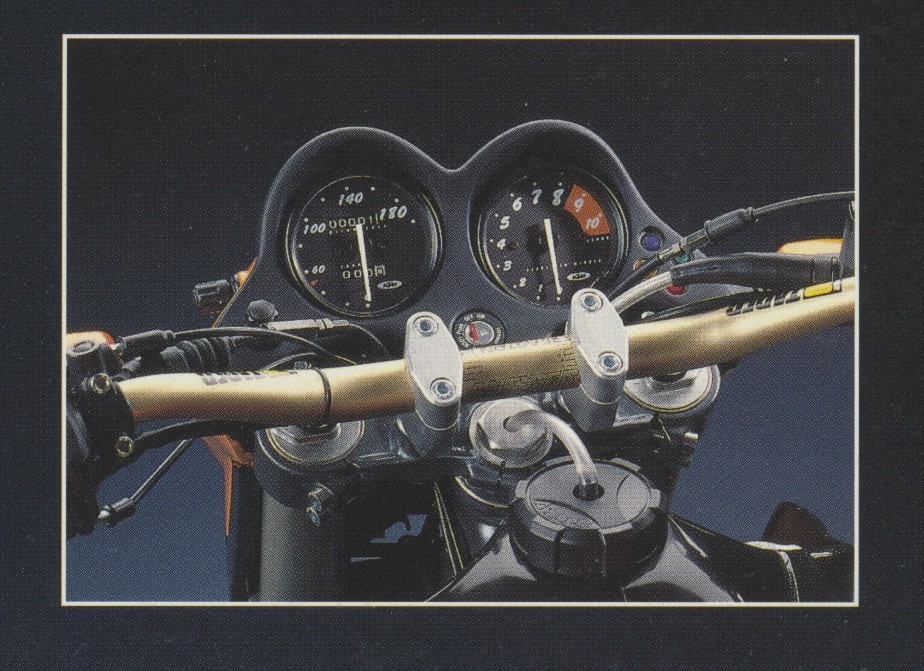 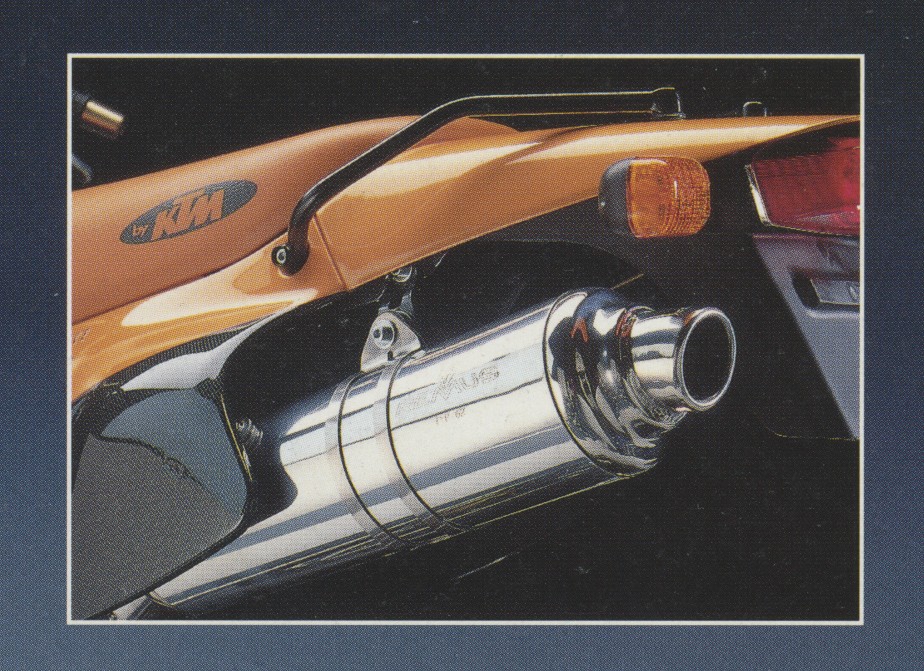 The DUKE was even available with the smaller 400cc LC4 engine to begin with. A total of 500 “First Edition” bikes were built, of which 50 were fitted with the 400cc engine. You therefore bought exclusivity with the bike.

Since 1996, DUKE owners have benefited from an electric starter and, in 1997, a secondary air system and unregulated catalytic converter were added to reduce exhaust emissions. In 1998, the “Last Edition” was fitted with the new 640cc engine that later also powered the DUKE 2. Up until the model change to the DUKE 2, some 4000 Dukes left the production line in Mattighofen.

The first DUKE was an important chapter in the history of KTM: a fascinating motorbike, tuned uncompromisingly for riding pleasure. The DUKE 4 has been available since 2012. Judging by the latest 690 DUKE that stands before us today, much has been gained: smooth running, space for a passenger, suitability for long-distance trips. But, completely in keeping with the “First Edition”, the latest DUKE is still a hot rod for enthusiasts and experts alike, light as a feather, lightning quick and amazingly suitable for everyday use. So the verdict of yore from US magazine “Cycle World” still applies today: “The DUKE is the King of street singles”. 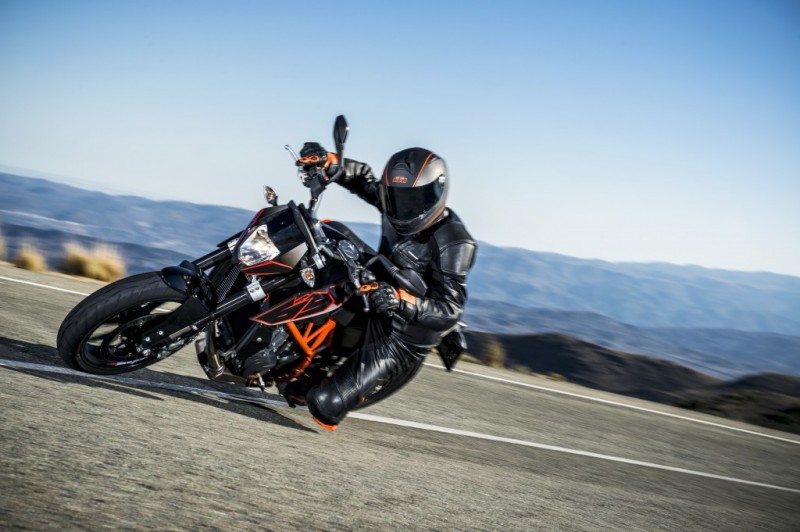 62 Responses to #inthisyear1994: Start of production for new DUKE range … just DUKE it!