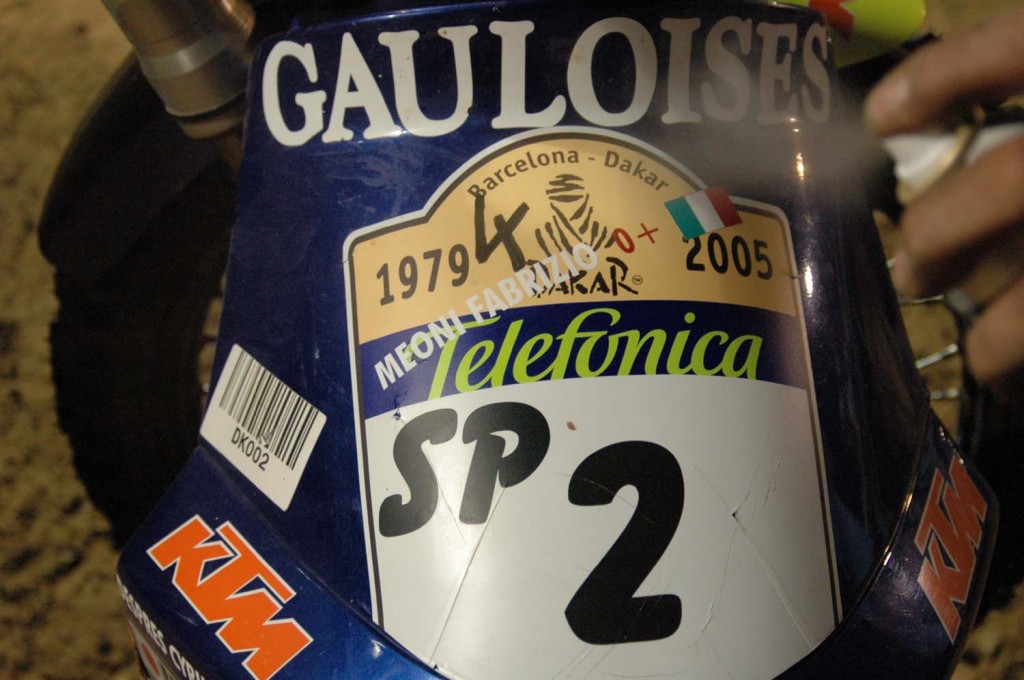 #inthisyear2005: Good fortune and tragedy at the Dakar Rally

The KTM Team unwillingly experienced the closeness of good fortune and tragedy during the 27th edition of the Dakar Rally. Following a thrilling three-way battle between KTM riders Fabrizio Meoni, Marc Coma and Cyril Despres, the Frenchman succeeded in taking the lead from Meoni on day 10. However, two-time Dakar winner Fabrizio Meoni lost his life the next day in a serious accident on Stage 11. Then on 16 January 2005, Cyril Despres arrived at Lac Rose in Dakar ahead of Spanish rider Marc Coma and the South African Alfie Cox, thereby securing KTM’s fifth Dakar victory in succession. 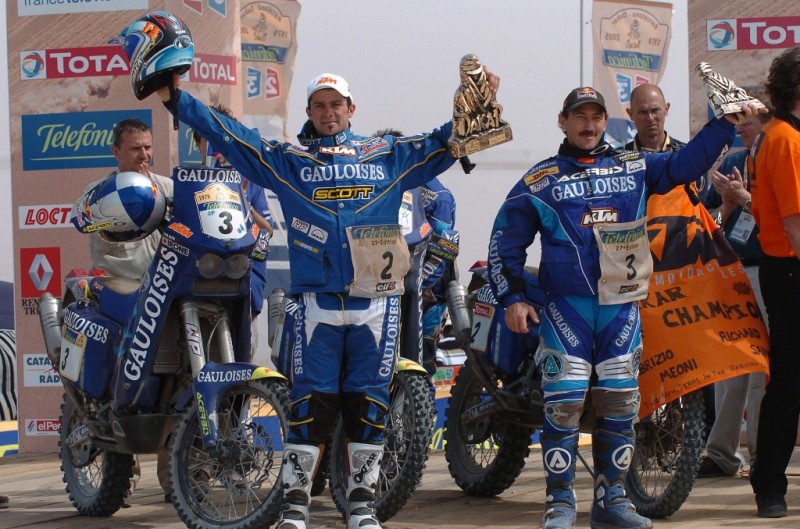 Cyril Despres was born on 24 January 1974 in Fontainebleau, France. He bought his first motorbike, an 80cc machine, at the age of 13, without his father knowing, using the money his relatives had given him to celebrate his first communion. He really fell for offroad riding, first Trials and later Enduro. He often watched the start of the Paris-Dakar Rally in Paris, marvelling at the riders, and somewhere along the line it became clear that he too wanted to take part in the rally someday.

In the year 2000, he was ready. Cyril had scraped together the necessary budget and was allowed to push his motorcycle to the starting line for the first time. His first stage win came as early as the following year. The way to the top was predestined – in 2003, he was second and won the Marathon Rally World Cup, winning twice on the Erzberg in the meantime. 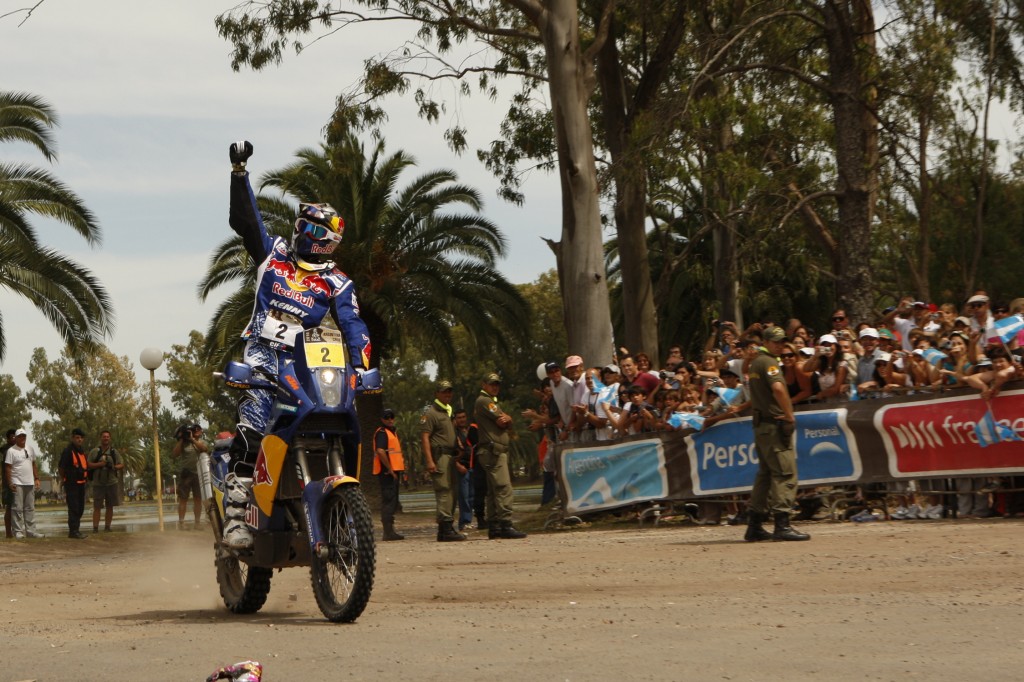 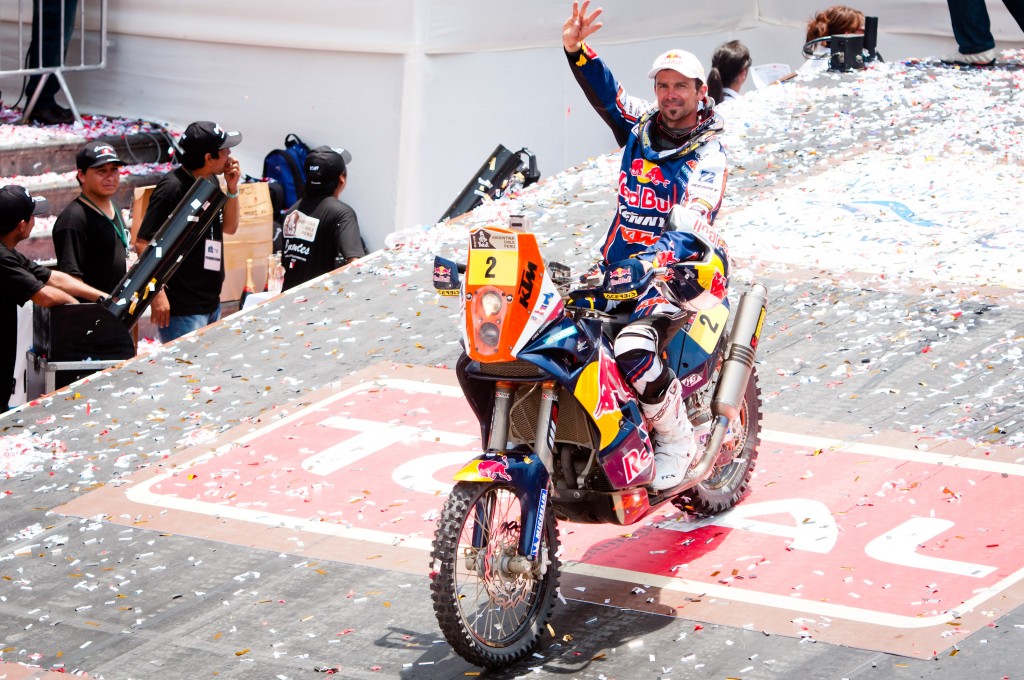 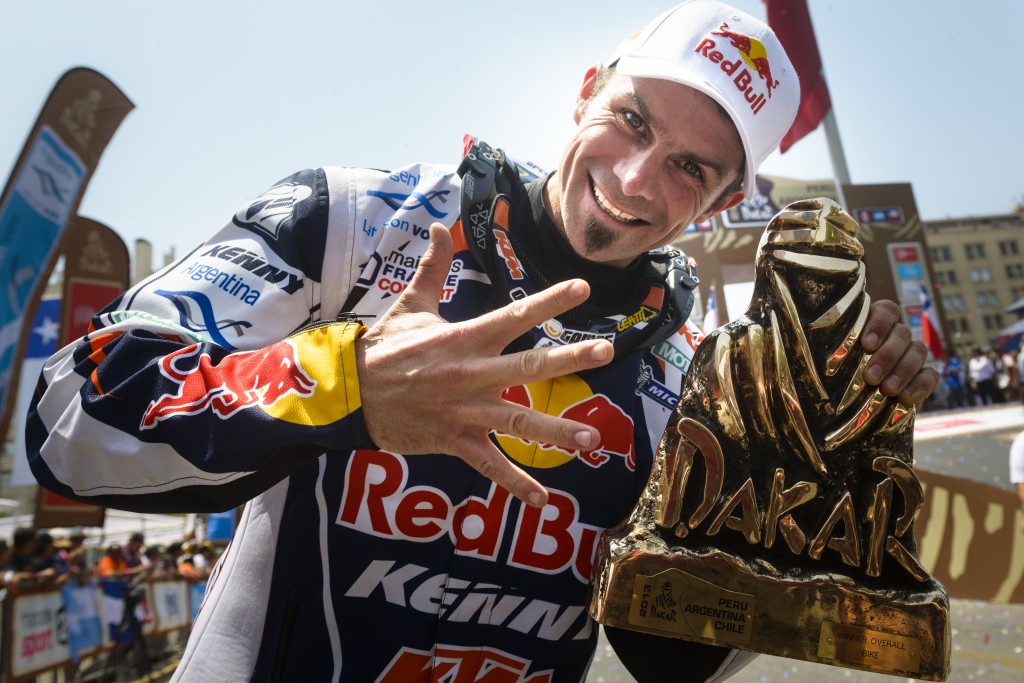 With five Dakar victories, Cyril Despres is the most successful KTM rally pilot ever; with 34 stage wins, he has won even more daily classifications than compatriot Stephane Peterhansel and tops the rankings in the stage-win table. And this is unlikely to change so quickly in the next few years, because Despres, like Peterhansel, has now switched to the four-wheel camp.

It didn’t take long after the restart in 1993 for KTM as the leading European manufacturer of offroad machines to be forced into following the fascination for long-distance rallies. So it was only logical for the new management board to adopt rally sport into the sports programme as a third discipline alongside Motocross and Enduro. And the first year made them hungry for more – five class wins for the KTM 620 LC4 in the Atlas Rally demonstrated just how suitable the hard enduro concept was for desert rallies as well.

Back then, of course, Heinz Kinigadner, the Austrian sports icon, was part of the team, riding to several awesome victories for KTM. However, in the Dakar Rally it was just not to be – although “Kini” was at the starting line seven times and notched up numerous stage wins, he never made it to the finish. Even so, he played a major role, first as a rider and later as a coach, in developing the successful KTM Rally bikes.

The breakthrough came in 2001. Fabrizio Meoni achieved the first Dakar victory for KTM on the KTM LC4 660 R. The Italian took the lead on Stage 10 and held it all the way to the finish. Meoni also went to the starting line on a KTM in 2002, although this time on the twin-cylinder 950 RALLY, which boasted almost 135hp. Just how dominant KTM was even then can be seen in the results list of old: on all 16 riding days, KTM occupied the first three places in the daily rankings and the general classification. 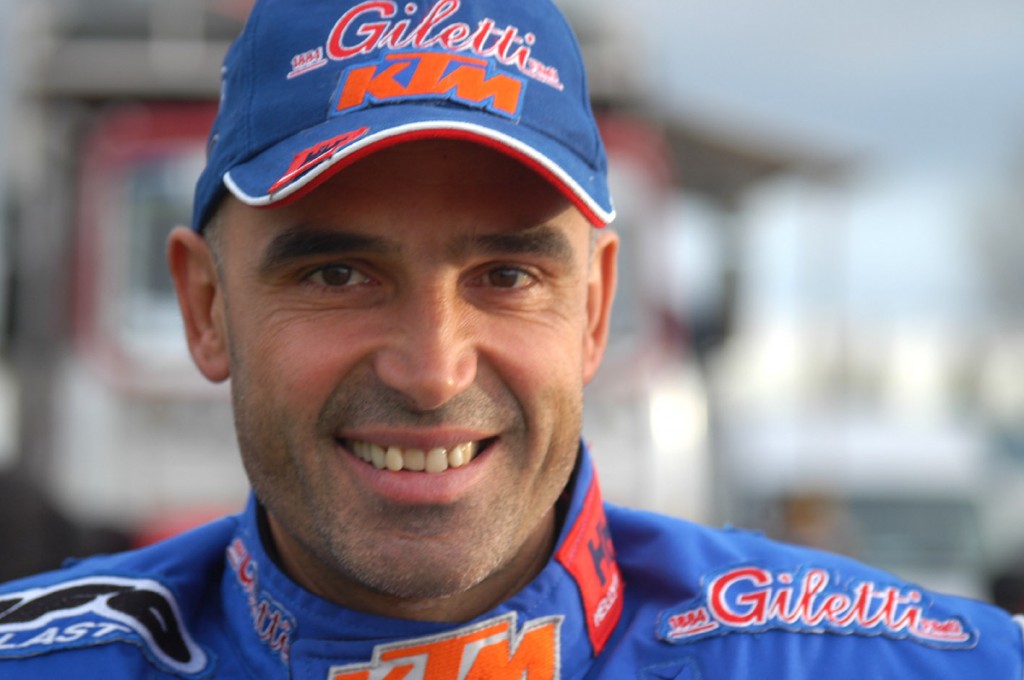 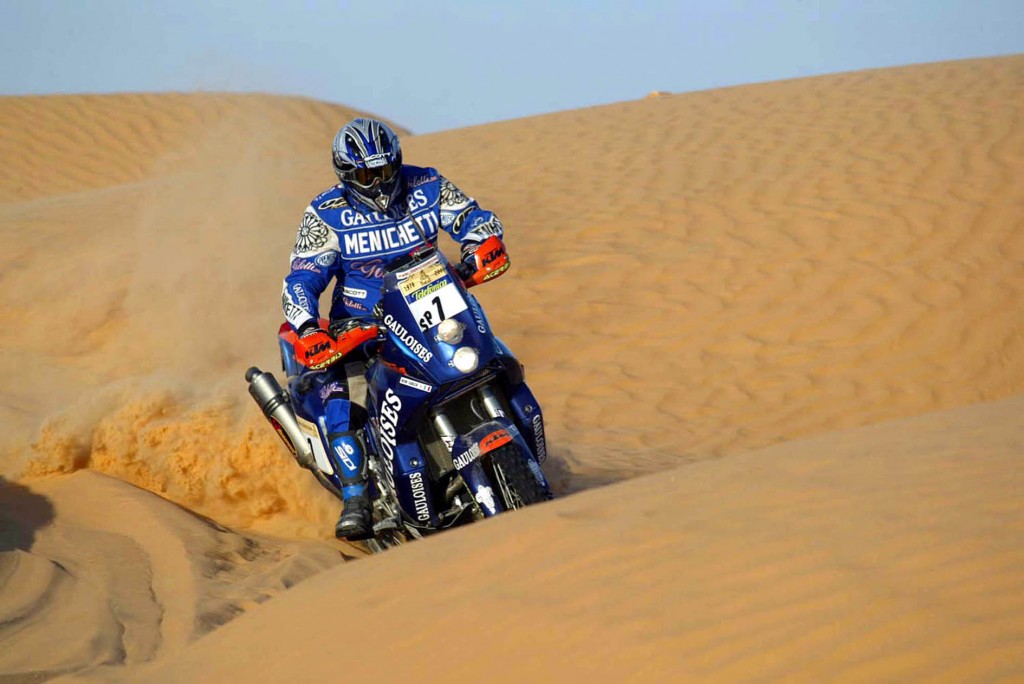 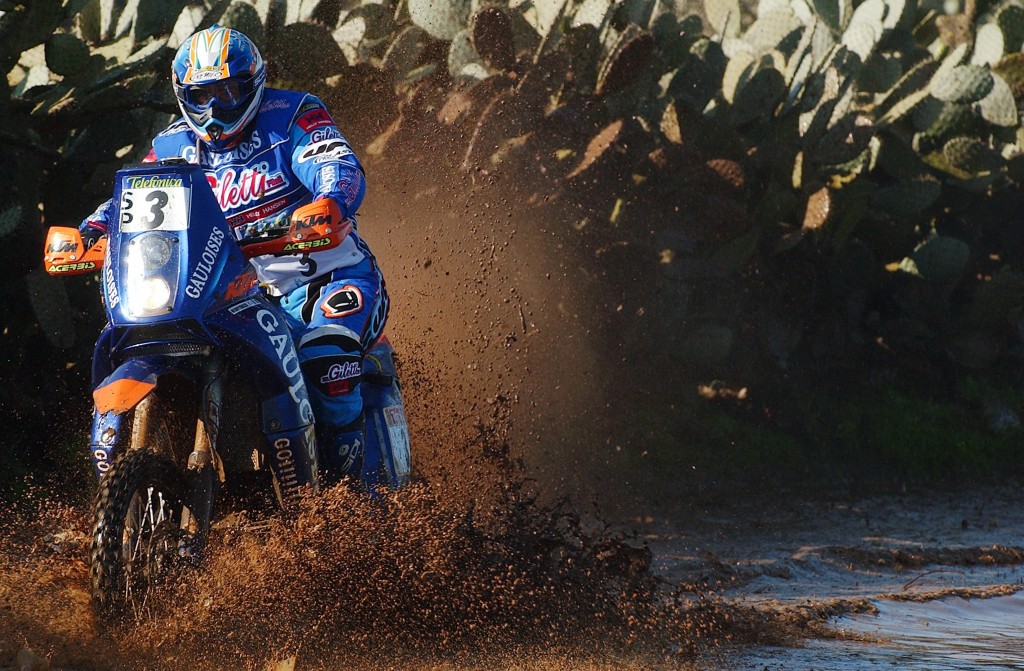 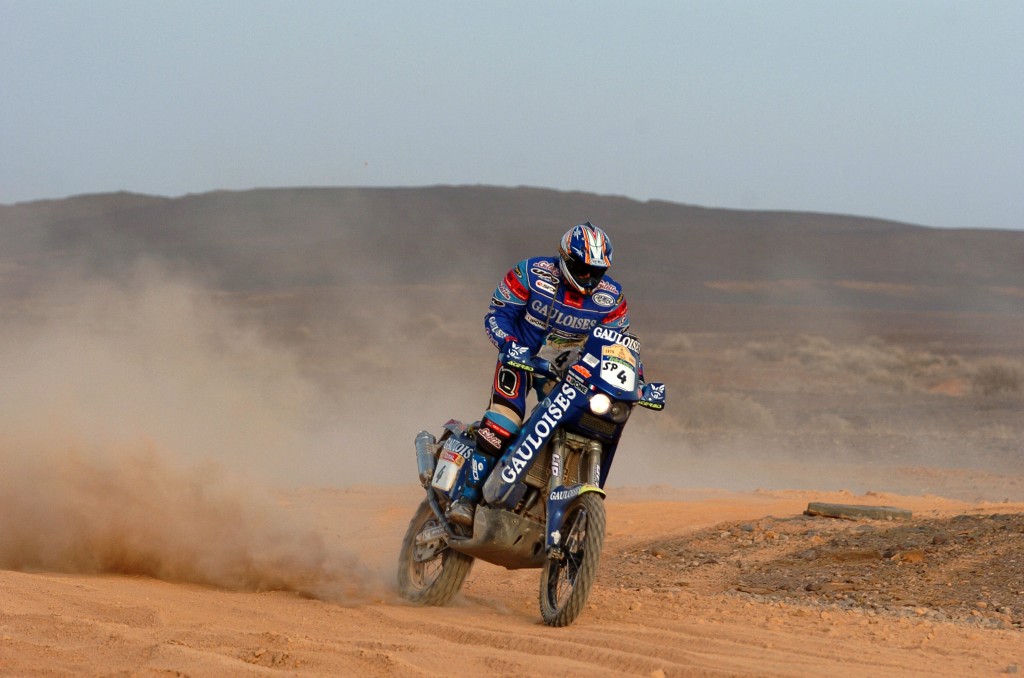 Even though Meoni never achieved another overall victory, he was always within striking distance of the lead in following years – until that tragic January, 11, 2005, when the Tuscan crashed badly shortly after a fuel stop and died on the spot.

No other manufacturer has succeeded in winning the Dakar Rally since Meoni’s first victory in 2001. Neither prohibition of twin-cylinder machines nor a last-minute rule change in summer 2009 – whereby only bikes with engines up to 450cc could still be used – succeeded in putting an end to KTM’s dominance, which is now into its 13th year.

The competition has heralded another exciting race for the 2015 Dakar Rally, but the experienced KTM Rally Team wants a 14th straight victory and is “READY TO RACE”!

87 Responses to #inthisyear2005: Good fortune and tragedy at the Dakar Rally