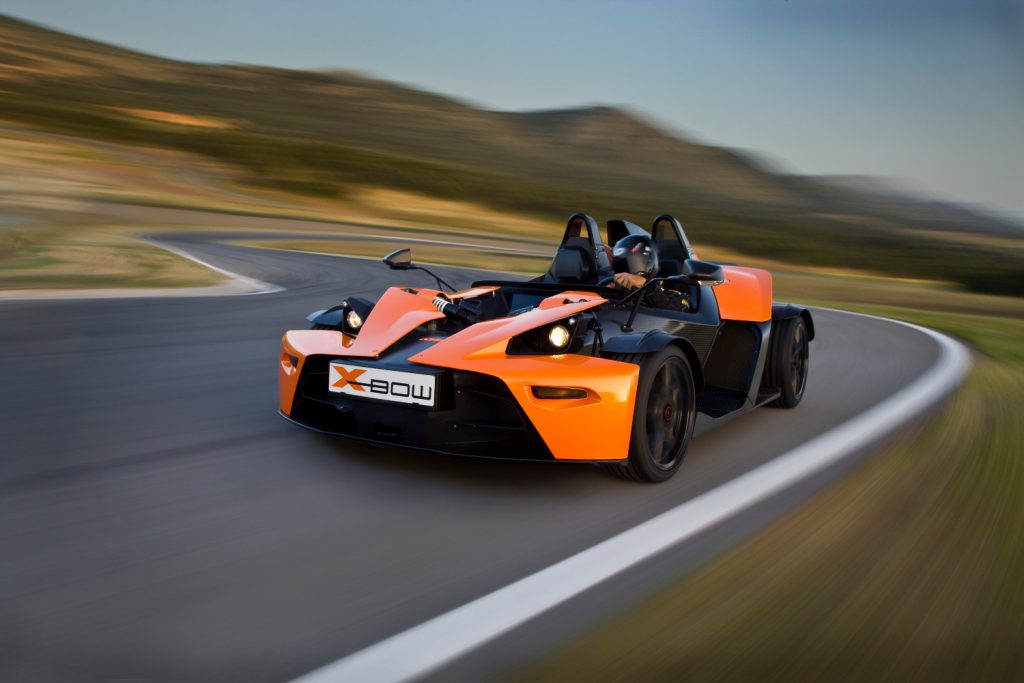 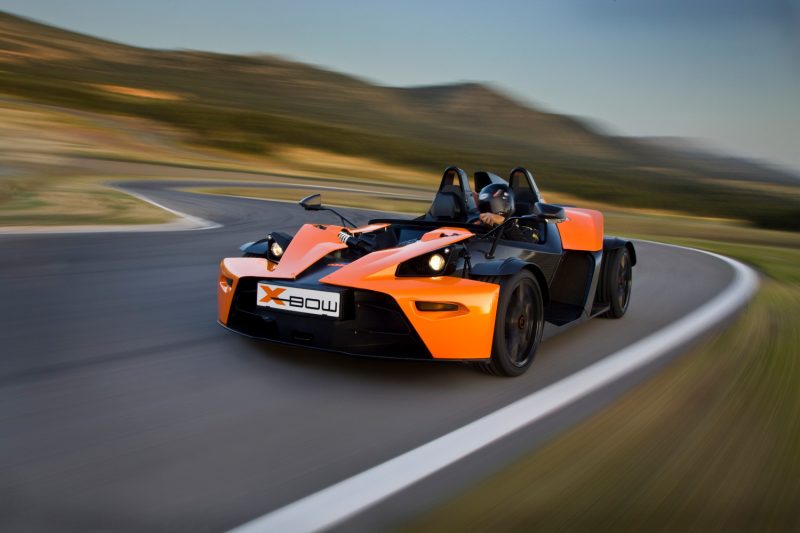 Of course, it could not possibly be a “sensible car”; it had to be a revolutionary sports car concept. “We took Colin Chapman’s idea of a spartan, lightweight sports car reduced to the bare essentials, and brought it into the new millennium – with as many technological innovations as possible,” says KTM CEO Stefan Pierer of the first four-wheel model in KTM’s history. This idea evolved into the X-BOW, which, true to the KTM READY TO RACE motto, delivers the excitement and immediacy of motorcycling – but on four wheels rather than two.

After the relaunch in 1992, it did not take long for KTM to become the global market leader for offroad motorcycles. KTM celebrated its fiftieth anniversary in 2003 by adding the street range to its portfolio, so it seemed only logical that the four-wheel segment would be the next step. Only eighteen months in development, the KTM X-BOW appeared in public for the first time in March 2007 at the Geneva International Motor Show. The announcement itself, and a scale 1:2.5 wind tunnel model, had already attracted healthy attention beforehand. Materials and know-how from the world of motorsport were extremely important to the development of X-BOW, and KTM worked side by side with internationally famous development partners such as the Italian race car manufacturer Dallara, Audi and of course KISKA. Their goal was clearly defined: a street-legal sports car that is capable of motorsport performance. 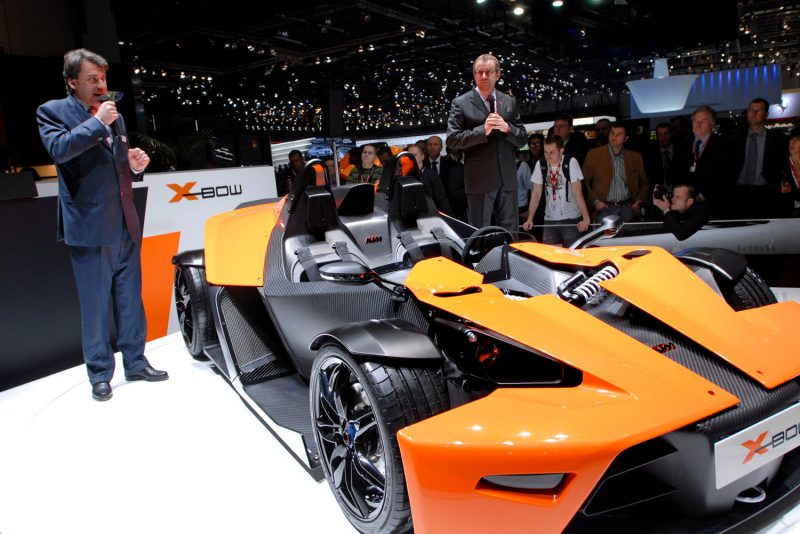 The car made its debut at the Geneva International Motor Show to global attention, overwhelmingly positive feedback from the motoring media and sports car enthusiasts, and many immediate reservations, so extensive market research was undertaken and the decision made to take the sports car concept into full production. Carbon composite specialist Wethje made a full carbon fiber composite monocoque weighing only 80 kilograms – a world-first for a series production vehicle. The total weight of the finished vehicle is around 800 kilograms. Combine this with the 2.0-liter, 4-cylinder TFSI turbocharged mid-engine from Audi, planned in different power ratings right from the start, and you are guaranteed exceptional vehicle performance. Acceleration from 0 to 100 km/h in less than four seconds is quite something.

If you’re looking for electronic driving aids such as ABS or stability control or luxuries such as air conditioning or a radio in the KTM X-BOW, then you’re wasting your time. The roofless, radical construction with nothing more than a symbolic windshield – just enough to meet the statutory requirements – ensure that the ride you experience is something that only ever used to be possible on a motorcycle. It brings back memories of the old Hard Enduro philosophy from the nineties – only the bare minimum in equipment, yet the very best of what there is. The suspension and dampers come from WP Suspension, while the Brembo racing brake system, detachable steering wheel and an aerodynamic complete underbody cladding are more reminiscent of a Formula race car than a street-legal sports car. The positive response in Geneva led to the KTM X-BOW being developed for commercial viability, and after more than a million test kilometers, 100,000 of which were on the racetrack, it appeared at the next Geneva International Motor Show in its final version – a super sports car with Formula 1 engineering. The first cars to be built were the exclusive “KTM X-BOW Dallara” series, in a limited edition of 100, to acknowledge the importance of the role played by Dallara in the development of the KTM X-BOW. All 100 of the cars were already sold before the first vehicle had left the purpose-built plant in Graz in June 2008. The decision to opt for a site in the Styrian capital was made because Graz is an important business location, and the base for more than 180 players in the automotive supplier industry.

KTM was already preparing the X-BOW for racing before it went into production. A race model was developed together with Dallara, and was successfully raced by the private Reiter Engineering Team in the GT4 European Series. With regard to planned customer sport activities, there was never any question of KTM having a works team.

Now, a decade after its Geneva premiere, “R“, “RR“, “GT” and “GT4” models of the KTM X-BOW are available. In the “R”, the focus is on improving overall performance: more extreme, faster and even more impressive – the purest driving machine down to the last detail. 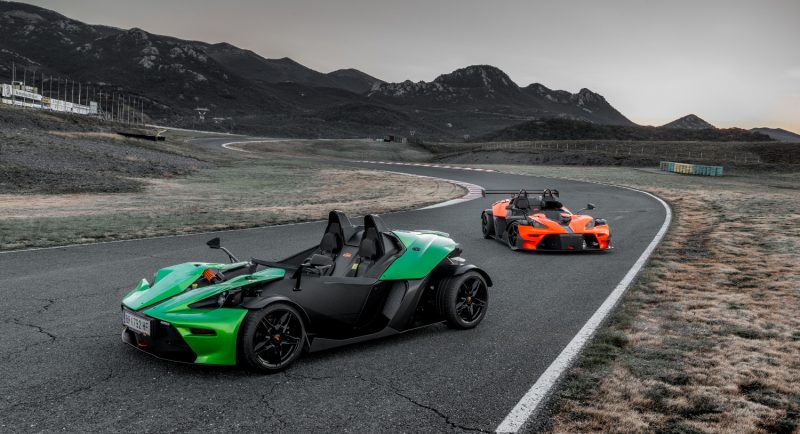 The KTM X-BOW GT is based on the “R”, but offers a frameless windshield construction, so that those inside do not have to wear a helmet.

The latest member of the KTM X-BOW family is the “GT4” – an internationally homologated, thoroughbred race car that is cleared to compete in almost all the important international racing series. The KTM X-BOW GT4 – like its predecessor in 2008 – was developed together with Reiter Engineering and combines the safety features of a Formula race car with those of a touring car: a homologated steel roll bar has been added to the carbon monocoque. Thanks to its high-tech equipment, such as the sequential, six-speed racing gearbox from Holinger (including paddle shifters on the steering wheel), its powerful, 360 hp 2.0-liter TFSI Audi engine, and its low total vehicle weight, the KTM X-BOW GT4 is perfectly equipped to meet the challenges of the international motorsport scene. If you want proof, look no further than the impressive number of individual victories and titles earned since the 2015 season. 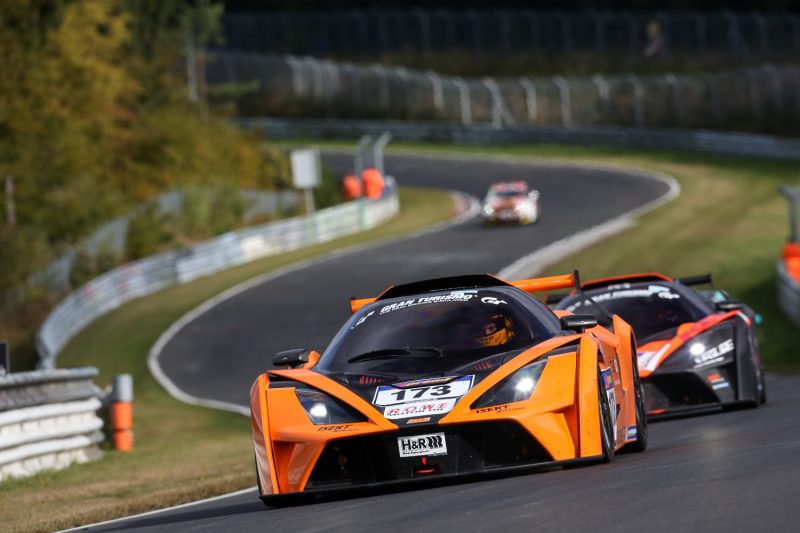 Whether the R, RR, GT or GT4 – today’s current models are still spartan, lightweight, highly-modern sports and race cars that are reduced to the bare essentials, just as it was ten years ago when the X-BOW first saw the light of day at the Geneva International Motor Show.

72 Responses to #inthisyear2007: the KTM X-BOW makes its debut at the Geneva International Motor Show