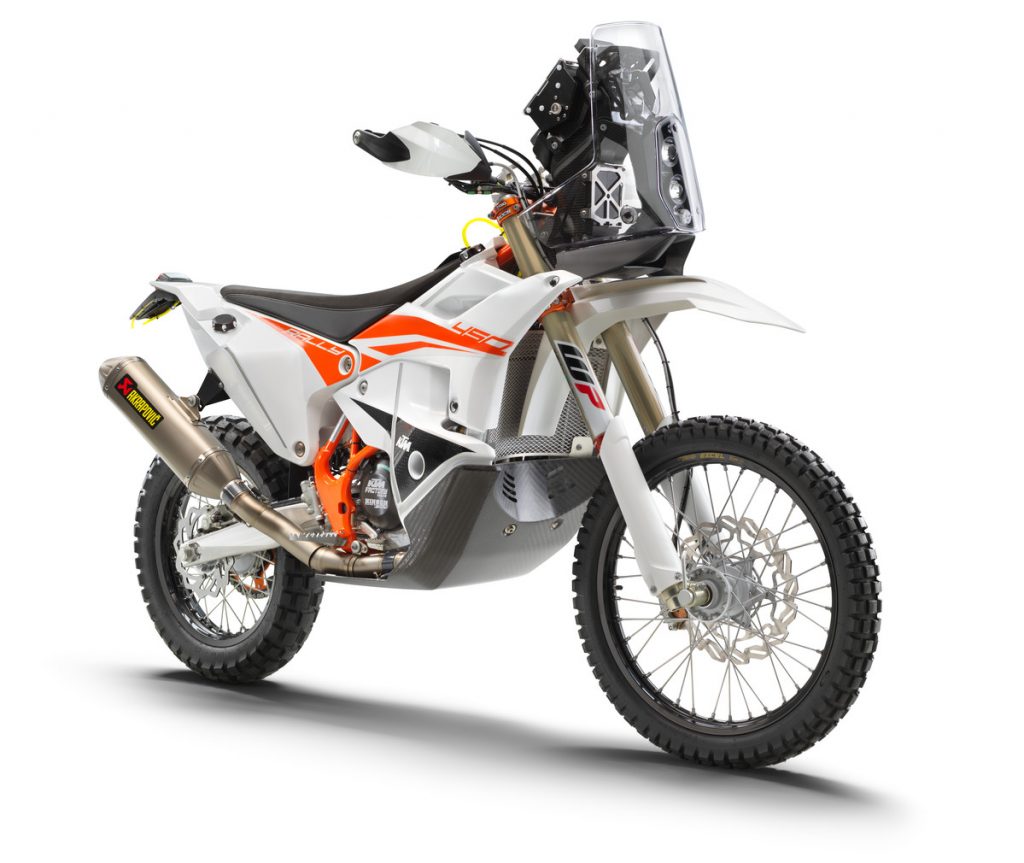 There are not many things more READY TO RACE than the KTM 450 RALLY REPLICA and this dune-eating, rally-bashing, Dakar-loving race machine has been re-designed from the ground up. Almost identical to the KTM 450 RALLY factory bike that took KTM to its 17th consecutive Dakar victory earlier this year with Matthias Walkner, this bike is the ultimate machine for those racing in rally competition. 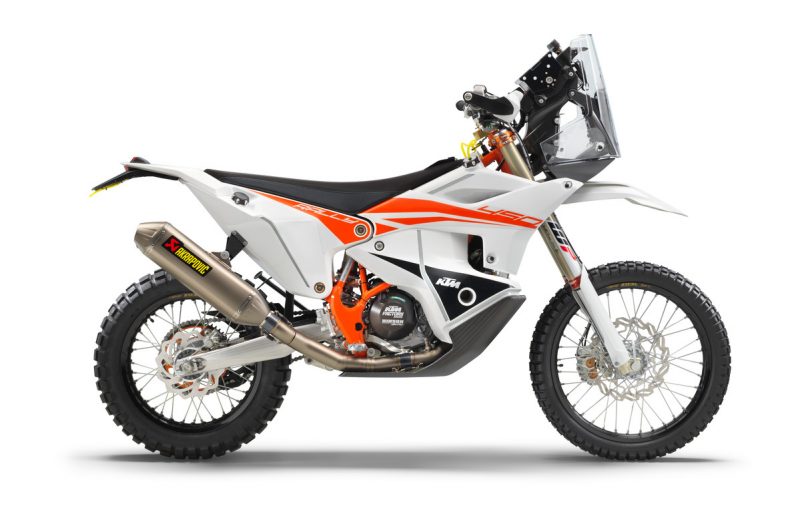 The MY2019 KTM 450 RALLY REPLICA has a completely new chassis that has been re-designed to improve mass centralization, bringing the weight to the center and lower in the bike for more agility and stability over the previous model. A new swingarm, linkage and shock absorber with a new air filter box, fuel tanks and seat provide a range of improvements, especially in overall weight distribution. A shorter and lower Akrapovič exhaust continues with the mass centralization focus, which has been a key point of evolution in the new generation, while the bike is fitted with WP XACT PRO 48mm closed cartridge Cone Valve suspension, along with its high-quality Brembo brakes, a carbon navigational tower with new bodywork that encompasses sophisticated ergonomics and aerodynamics that make the bike more refined than ever. With a new 450cc fuel-injection engine with increased power thanks to a new cylinder head, and a new transmission that has been developed and tested in the severest of conditions, the MY2019 KTM 450 RALLY REPLICA is ready for anything when it comes to the perils of the Dakar.

With only marginal differences to its factory counterpart, the KTM 450 RALLY REPLICA is made in limited numbers and developed by the Red Bull KTM Factory Racing Team. 75 units will be produced this year and all units have already been reserved before production – probably thanks to the high-quality components, innovation and the satisfaction of knowing during development the bike has been tested in anger by the likes of Dakar winners Toby Price, Sam Sunderland and Walkner. 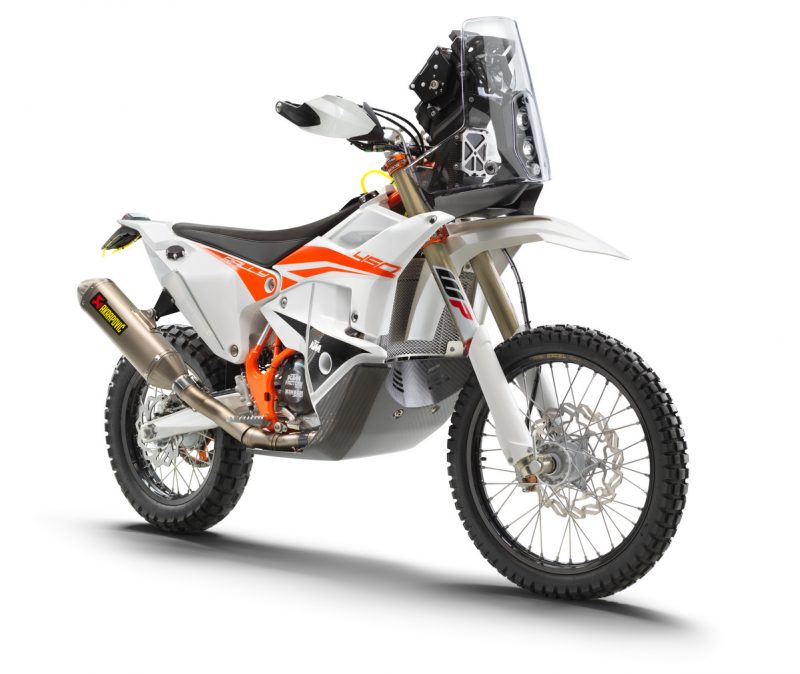 “The all-new KTM 450 RALLY REPLICA is based on our already-successful new factory machine that we began racing at the end of last year, which was specifically developed to win the Dakar. With the latest generation, our goal and focus was to develop a bike around the style of our current factory riders, who required something with more comfort, more agility and improved stability,” said KTM Factory Rally Team Leader, Stefan Huber (who is a guru of all things rally and rally development).

“We looked for an improvement in handling, a lower weight, as well as a bike that also meets the demands of the conditions and intensity that we now find at Dakar. The KTM 450 RALLY REPLICA machine is almost identical to those raced by our athletes, and is available for customers to get the opportunity to own and ride a really premium, purpose-developed rally machine with high-quality components and maximum innovation. It’s been truly revised from the ground up, and we are looking forward to seeing these bikes being raced by our customers.”

Take a look at this thing of beauty. We might not all want to endure the extremes of Dakar with its freezing high-altitude mountainous stages, comprised with gnarly hard pack, desert and dunes in 50 degree temperatures over 1000’s of kilometers, but we’re pretty sure this would be a cool bike to own. 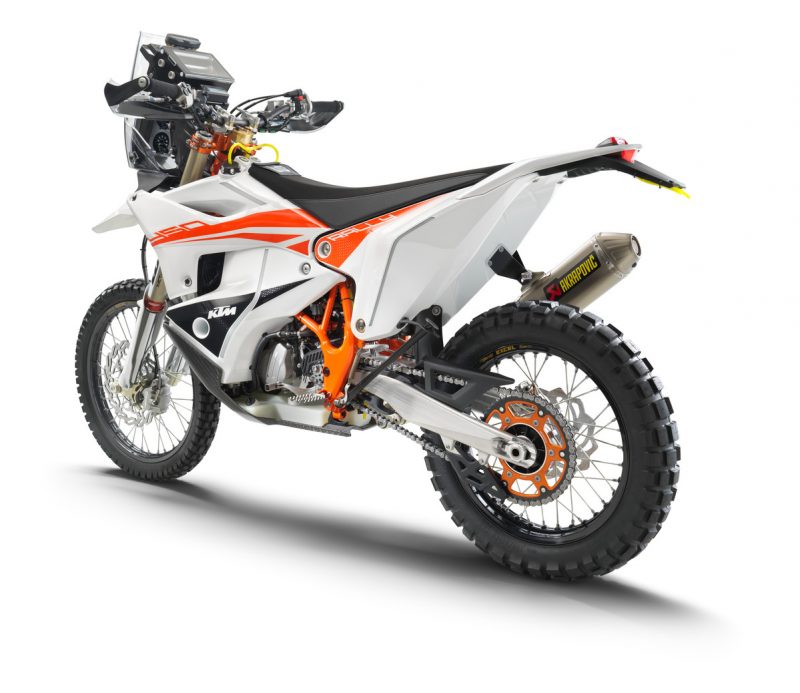