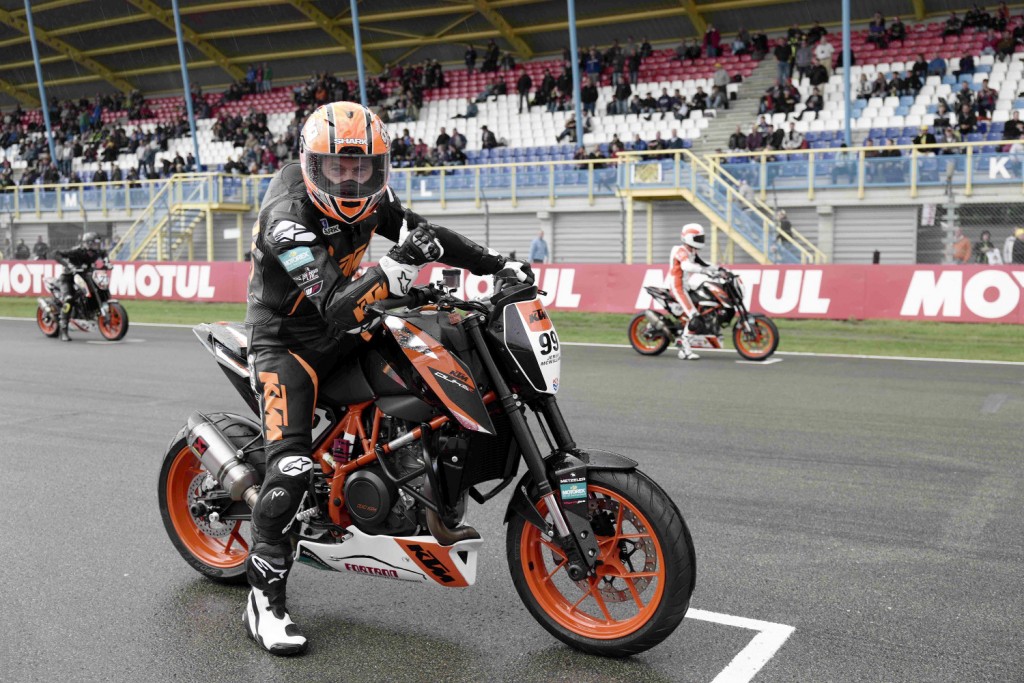 He might be 52, but whenever the opportunity to leap onto a racing bike presents itself, Jeremy McWilliams does not need to be asked twice. The one-time Grand Prix rider has maintained a close relationship with KTM for many years, and so he was not going to pass up the chance to join other ex-motorsport riders for the KTM 690 DUKE Battle in Assen.

It’s not worth it, says Jeremy McWilliams to himself. It’s 5.30 on Saturday afternoon and the second qualifying round for the KTM 690 DUKE Battle is about to begin; except the rain does not want to stop. McWilliams therefore decides not to get back in his leathers. Considering how wet the track is, an improvement on the lap time from the first qualifying round is out of the question anyway. McWilliams sits on his chair in the KTM hospitality tent as his wife Jill passes him his orange-red helmet. McWilliams calmly fits a new visor and, while his DUKE Battle colleagues get ready for the second qualifying round, he settles down for an interview. 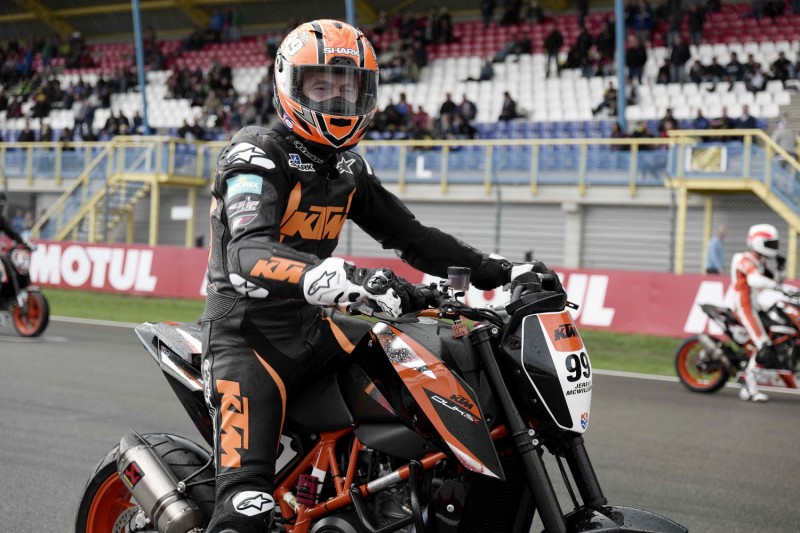 Jeremy, what have you been up to for the past few years? He begins to talk of his occasional appearances for KTM in the Superbike IDM. Of his victories in the US Battle of Twins series. Of his many trips to the Phillip Island Classic in Australia, where he has become a regular guest. Of his role in the Hollywood movie “Under The Skin”, where he played the motorcycle-riding bodyguard for the beautiful Scarlett Johansson. And he talks of his bold comeback in the motorcycle world championship two years ago, when he agreed to race the Moto2 chassis for the British cult brand Brough Superior at the Silverstone Grand Prix. No prior testing, a completely new bike, the Moto2 hotheads around him, young enough to be his sons … In short, a hopeless venture. “But the Brough Superior lads have just looked for a young, promising rider,” he says.

Then there are the countless tests for KTM. Whenever the guys in Mattighofen need someone who knows how to assess a motorcycle, it’s McWilliams’ number that they call, regardless of whether it’s for an RC8 or a SUPER DUKE development. The KTM engineers know not to expect any nonsense from McWilliams when he gets off the bike. And when KTM later unveils the finished products to the world’s press, such as the KTM 1290 SUPER DUKE GT presentation on the island of Mallorca in spring 2016, McWilliams is also on hand. KTM had invited journalists from all over the world, all of whom were free to test the new bike. But who would escort the journalists across the island, provide expert answers to their questions and entertain them at dinner with delightful anecdotes from his career? None other than Jeremy McWilliams. 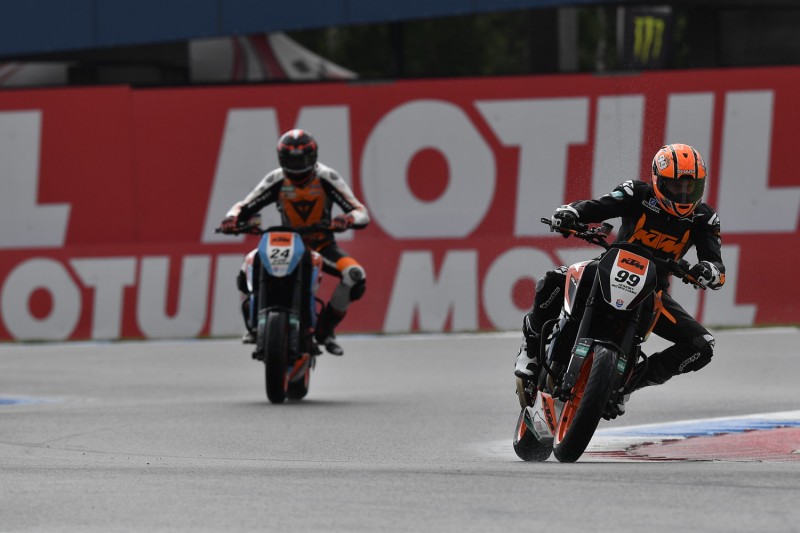 Back in the day he was one of the greats of Grand Prix racing. In the 500cc world championship from 1993 and then in MotoGP, with a stint in the 250cc class in between. But as McWilliams rarely found himself on the right bike at the right time, he managed just one Grand Prix victory: 2001, here in Assen, on a 250cc machine. His speed was never in doubt, as three pole positions clearly show. One pole came in 2002 on Phillip Island, where he left the vastly more powerful 990cc 4-stroke machines trailing behind his 500cc 2-stroke bike. Oh, and his bike’s top speed was 30 km/h slower too.

It was back in these MotoGP days that he first established an affinity with KTM too. In 2004 and 2005, it was McWilliams who was tasked with testing the Roberts team machines with the KTM engine. The project was soon canceled and McWilliams never got to take the bike out for a competitive race, but his profound judgments on the machine and the excellent lap times left an impression on some important figures at KTM. Today Jeremy McWilliams is firmly a member of the KTM family.

McWilliams was therefore the obvious guy to call when KTM Netherlands was looking to give its KTM 690 DUKE Battle race a prominent makeover at the Assen Grand Prix. And he was not the only former world championship rider invited to get back in the saddle: Jarno Janssen, Henk van de Lagemaat, Jasper Iwema and Arie Vos were also asked to compete. But it is mainly Jeremy McWilliams who attracts the attention of the fans. As the veteran campaigner skips the second qualifying round to sit in the KTM hospitality tent while the other VIPs are out on the track, he hopes that his fans will forgive him.

In fact we have already asked everything that we had prepared, but hang on a second, there’s one more thing: Jeremy, you’re getting a bit bored with life aren’t you? He smiles, thinks about it for a bit, and then the penny drops: “You mean the North West 200?” Of course, what else?

What drives a 52-year-old man with a wife and two kids to take on this most fearsome of road races? The North West 200 in McWilliams’ homeland of Northern Ireland is held each May and sees riders fly past houses, walls and lampposts at speeds of up to 300 km/h. McWilliams glances over to his wife and admits: “Okay, as far as Jill is concerned, May is not the most relaxing time of year.” And for McWilliams, it’s not just the taking part that counts: he is a regular winner of the North West 200. As for this year, he even appeared in four classes: Supersport 600, Superstock 1000, Superbike and Super Twin. Is this a good thing? He takes a deep breath before answering: “I always speak with my family about every race that I’m invited to.” They then all sit around the kitchen table at home in Belfast and decide whether dad is given the all-clear to compete. Everyone is entitled to give their opinion, including the two boys Jack (22) and Zak (18). Only once the family committee gives its approval does dad enter the race. “We used to talk about what our sons were allowed to do. Now we discuss what I’m allowed to do!”

Whenever McWilliams is out on a racing bike anywhere in the world, you can be sure that his sons will be on the phone to check up on him. Today is no exception, even though he’s on relatively harmless VIP duty in Assen, as the phone starts to ring and Zak’s number is displayed: How’s it going dad? Everything OK? Yeah yeah, it’s all good, he answers.

In the meantime the other KTM 690 DUKE Battle riders are powering round the course. Jill’s attention has turned from our conversation and is instead focused on the goings-on outside. Then she bends down to Jeremy: “Hey, look, the rain has eased off.” A racing wife who, instead of urging caution, sends her husband out into the rain – that can only be the McWilliams. Jeremy stands up, heads over to his truck, pulls on his leathers and completes another three laps in the rain.

On the following day he finishes the race in second place behind winner Arie Vos, the multiple Superbike champion from the Netherlands. McWilliams trudges in from the presentation ceremony and passes Jill the bottle of champagne. “I’m not risking it,” he says. After all, on the following Wednesday – just three days’ time – he will be out testing again at Oulton Park. He’s been asked by a British team to put a Superstock 1000 through its paces. That’s simply the way he is, Jeremy McWilliams: he just can’t stop. 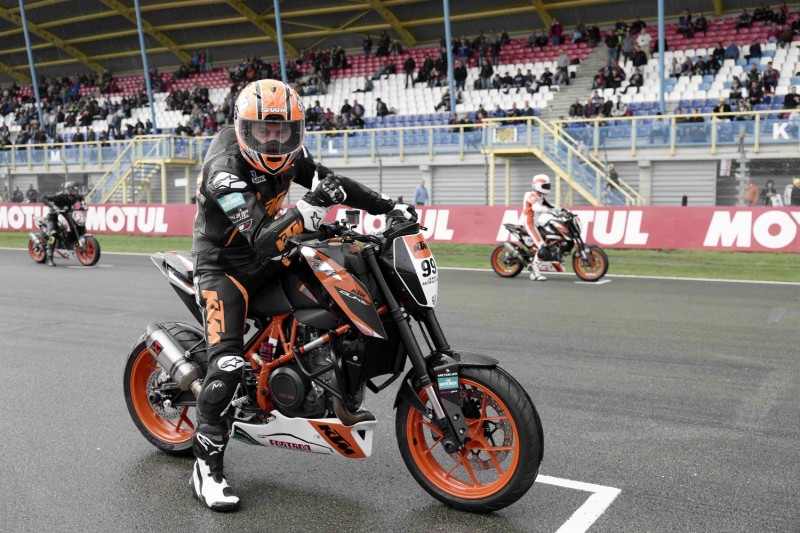