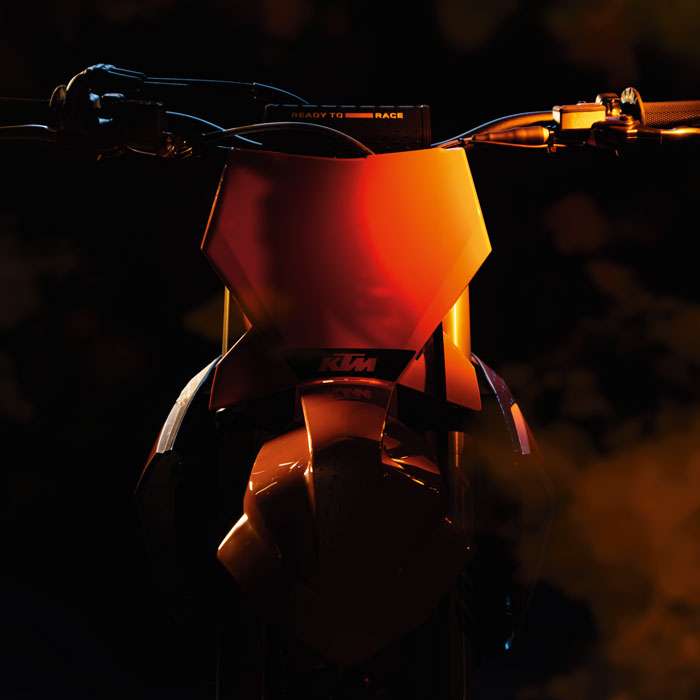 Get ready to re-think what you feel-and-know about offroad motorcycles: the 2023 KTM SX launch will take place online on May 10th at 17.00 GMT+1. The next level of motocross riding, racing and performance has been years in the making and now its within grasp.

This is an event and explanation you won’t want to miss. KTM have dominated the motocross and supercross landscape since the introduction of the last generation of KTM SX-F machinery in 2015 but with a fresh approach and a new concept there has been a reinvention.

To see and learn more on the afternoon of Tuesday May 10th it’s super easy. Simply hit this LINK.

Now you’re on the list and one of the first privileged few.

The latest editions of the KTM SXs are a big deal. We’ve not only developed a sumptuous new outline for the chassis and the way motocross bumps, jumps and ruts can be tackled but we’ve also got juicy engine upgrades and some special news with the 2-stroke KTM SXs.

Why is this significant upgrade of the KTM SXs exciting us all in Austria? Well, it comes from the sheer rate of peerless sporting achievement in the past decade and more. A rider like MXGP World Champion Jeffrey Herlings has depended on KTM SXs for his development as junior and SX-Fs for a glittering array of MXGP success, taking 99 GP wins and 131 podiums in 12 years and has made 51 MXGP rostrum appearances in only half a decade. Or what about Tony Cairoli? Seven world titles with the KTM 350 and 450 SX-Fs. The Italian and Dutchman are just two Grand Prix stars that have given the KTM 450 SX-F 126 overall wins in the premier class since 2004.

It was in ‘04 that the current definitions of the FIM World Championship categories was formed and in both MX2/MXGP KTM have racked-up over 600 moto checkered flags and well over 300 Grand Prix victories. In AMA SX the KTM 450 SX-F has won five of the last seven 450SX titles thanks to the wins, podiums and consistency of Ryan Dungey and Cooper Webb in the stadiums of North America.

So, make an appointment and get ready to get ahead.