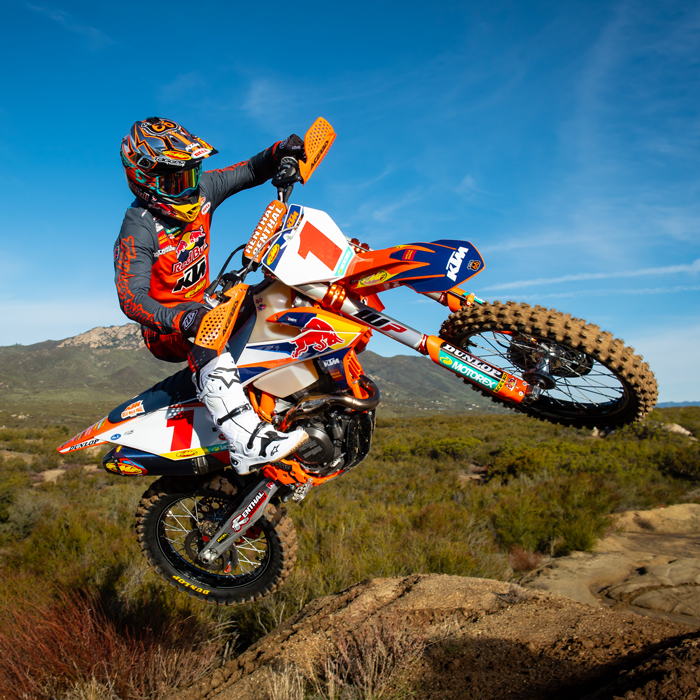 KAILUB RUSSELL: TIME FOR CHANGE BUT NOT BEFORE ONE MORE GNCC TITLE

GNCC Racing legend Kailub Russell is determined to earn an eighth straight title in 2020 but is equally set on moving forward with plans for the future, when this season is over. What is next for the woods racing champion, what’s the secret to winning and which of his many winning KTMs is his favorite?

Announcing that 2020 will be his last season of GNCC Racing doesn’t mean seven-time champion Kailub Russell is in any mood to back off the gas just yet. Covid-19 may have brought a temporary pause to proceedings but the FMF KTM Factory Racing Team rider is determined to go out on top with an eighth GNCC title. 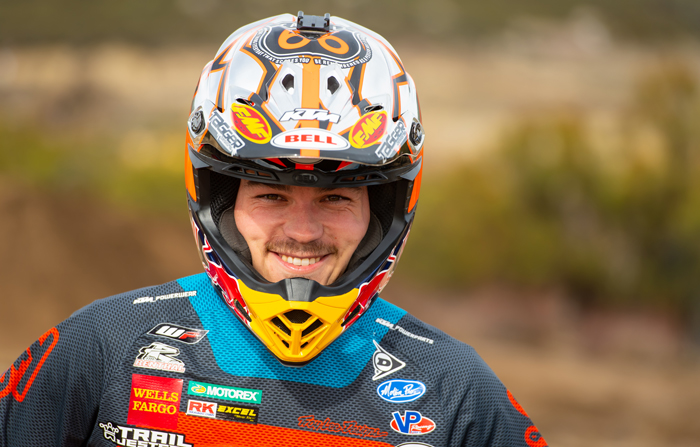 The goals remain the same – to win the 2020 GNCC Racing title – but Covid-19 delivered a twist in the plot when it brought a halt to racing in the USA, just as it did across the world. Unlike many countries, in the US it has been possible to keep riding so riders like Russell have at least been able to train and keep busy, “I bought a new piece of land and it’s been keeping me pretty busy trying to get that place dialed in,” said Russell from his North Carolina home. 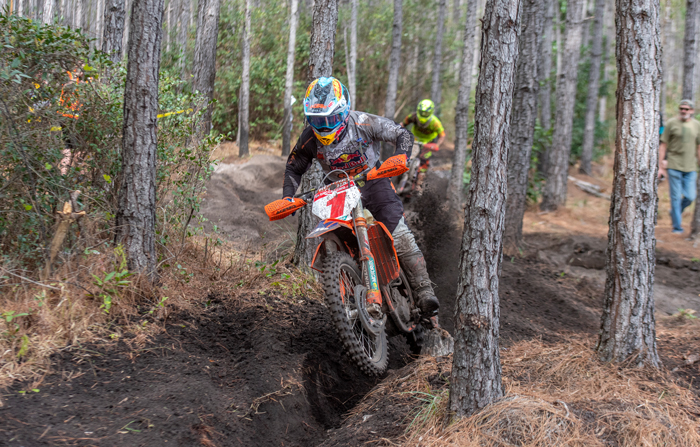 Unlike most riders, who tend to keep quiet about plans for moving on and prefer to call time after the finish line of their last race, Russell took the unusual step of announcing his plans before this season had even begun. “I wanted to announce my retirement before the season so that all the other guys I’m racing against have the chance to up their game and try to put an end to it,” explains the celebrated KTM rider on his pre-season announcement that 2020 would be his last in GNCC Racing.

So far in 2020 “those guys” he’s racing against have tried but failed to topple the champ who took three GNCC wins on the bounce plus a Sprint Enduro victory before the lockdown took hold. It begs the question, why call time now on his GNCC career at all? “Racing has been good and I’m at this level but there’s only one way to go now. That’s dwindle backwards and I’m not ready to go backwards, I race to win,” explains Kailub. “It’s not that I can’t win for another couple of years, but I’ve had a good career and there are some other things that I want to give my attention to before I’m actually done racing. Stepping away from GNCC and taking my focus away from that is gonna allow me to move forward with my plans for the future.” 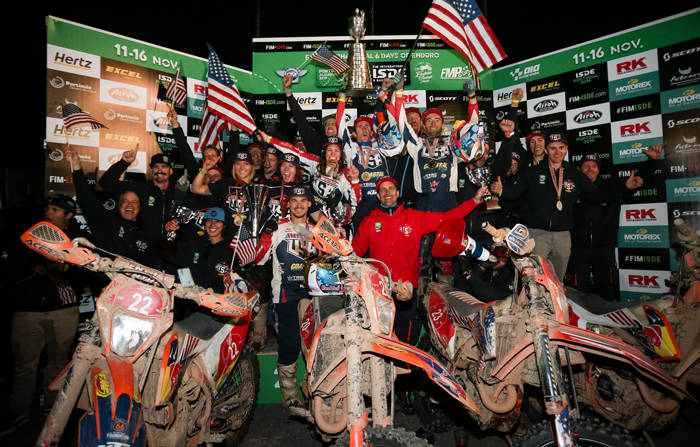 CALLING TIME ON GNCC CAREER, BUT WHAT NEXT?

Many rumors have circulated as to exactly what Kailub will do next, fueled in part by fellow KTM rider Ryan Sipes who has branched out across different bike sports in his later career years. But Kailub says Off-Road and Enduro are very much part of the plan with the pinnacle of enduro sport – the International Six Days Enduro – set to be held in Italy 2021 firmly on his wall planner.

“The definite plan is the Six Days and the Full Gas Sprint Enduro series, that’s for sure. But past that I really can’t say yet. We’re still working some stuff out but it’s going to be pretty big news and pretty exciting. It’ll probably be in December when we’ll announce that. We’re still in talks with KTM about how it’s going to work out so wait and see.” 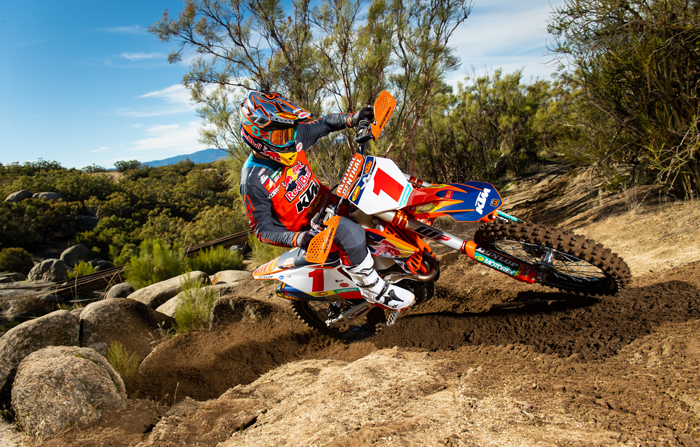 Whilst plans are being made for beyond 2020, Russell firmly has his sights on an eighth straight GNCC title.
PC @SimonCudby

During a career which has seen racing, championships, riders and the off-road sport in general go through a huge period of change, which season stands out as Russell’s greatest? “Definitely 2015. I was just really focused and doing a ton of racing, so I didn’t have any time to do anything else. It was train a couple of days, ride a couple of days, go to the race, repeat…there was only a little bit of time there where I wasn’t doing anything. It meant I could stay sharp and stay on top of my game.”

That relentlessness of racing, those long seasons and the spells of back-to-back events that cement Kailub’s place in racing history, are also the reason why there comes a tipping point where the enthusiasm of youth gets muscled out of the way by age, family life and other priorities. “It can be tough on your body and now if I’m going to have a five or six week stretch where I don’t have a weekend off I’m burnt and get to the point where I’m just going through the motions. Back then [2015] I don’t remember being that way at all. I was fresh and excited every weekend. It’s crazy that is only five years in life, but it changes the dynamics.” 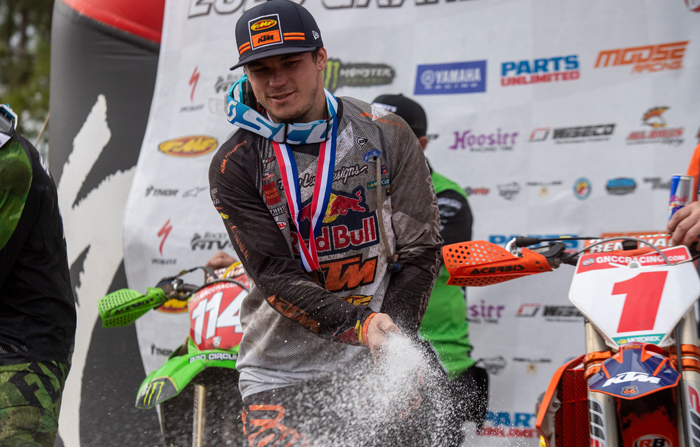 One thing which is clear and consistent is the steely determination to win, even in the face of defeat. “When those guys get close to beating me it drives me harder. If you beat me it lights a fire in me that makes me try harder for the next one.” It has been a feature of Kailub’s career that he has always bounced back from a defeat with added fire in the belly: “If you beat me one weekend, I get stronger, I use the pressure,” he says.

One of the truisms of sport, particularly motorsport, is that one race does not make a champion. Every race counts and off-road sport has the added reality of being across different terrain. You might be a good sand rider but can you ride the hard-pack or the rocks? It’s as true of GNCC as it is of the WESS Enduro World Championship or Grand Prix Motocross.

“It’s one of those things that blows my mind,” says Kailub on the ability to be fast everywhere. “There are a lot of guys that can win but only in certain places. I don’t know why that is or why that comes about but it’s a real thing. I always thought that if you could be good in one place you should be good all places and it shouldn’t be a roller coaster.”

“My dad always instilled a lot of discipline in me and he used to make me read a Vince Lombardi quote. It was a long quote but the biggest thing I took out of it was you don’t do things right every once in a while, you do things right all the time.

“I think if you work like that it takes all the guesswork out. If you know you’re doing it right all the time you’ve got no option than to be good everywhere.” 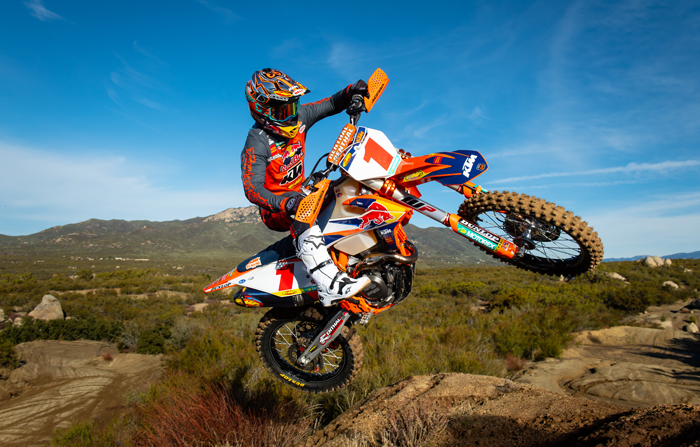 HOW GOOD IS MY KTM?

Across a decade racing for KTM, Kailub has moved through different generations of KTM XC models with the four stroke XC-Fs being the bikes of choice in the US. Is there one bike which he looks at as the best?

“I’ve got all my championship bikes with me at home and I think they got better every year – to the point where the current bike, the KTM 350 XC-F, is almost too good for riding in the woods to be honest with you! The current 350 motor is almost like a 450 from four or five years ago.”

Narrowing it down to one bike, Kailub says the model year jump from 2015 to 2016, the model year when Red Bull KTM Factory Racing’s Roger De Coster and Ryan Dungey were on board developing what turned out to be a game-changer, was a step-progression in terms of chassis development. 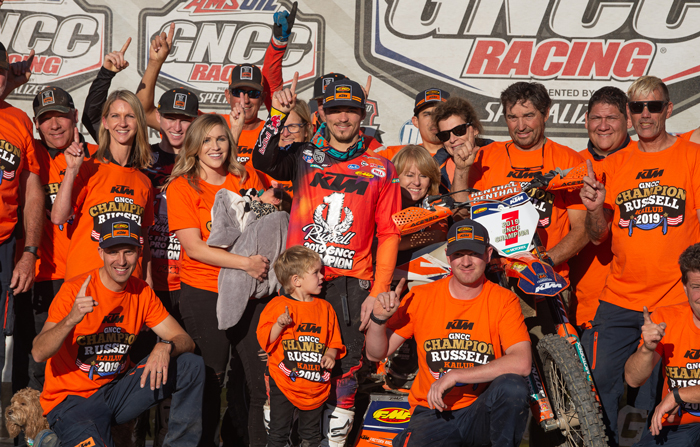 Whilst talk is about what his future holds, repeating his 2019 success for another title remains the focus.
PC @K Hill

“I bugged Antti (Kallonen, FMF KTM Factory Racing Team Manager) about getting one for the National Enduro series because the bike turned better, was nimbler and handled better. I was doing well in GNCC but struggling a bit in the Enduros on the 350 so I switched to the new KTM 250 SX-F, started racing it in Sprint and National Enduros and started killing it.”

“At the time it was such a big difference from the bike I was on, the switch in the frame, the geometry, it was a jump.”

“I think that was the year when Roger and Dungey and those guys were onboard with development and they made a big improvement. But if I was to ride that bike now, I’d probably say the same about this current model!”

20 Responses to KAILUB RUSSELL: TIME FOR CHANGE BUT NOT BEFORE ONE MORE GNCC TITLE