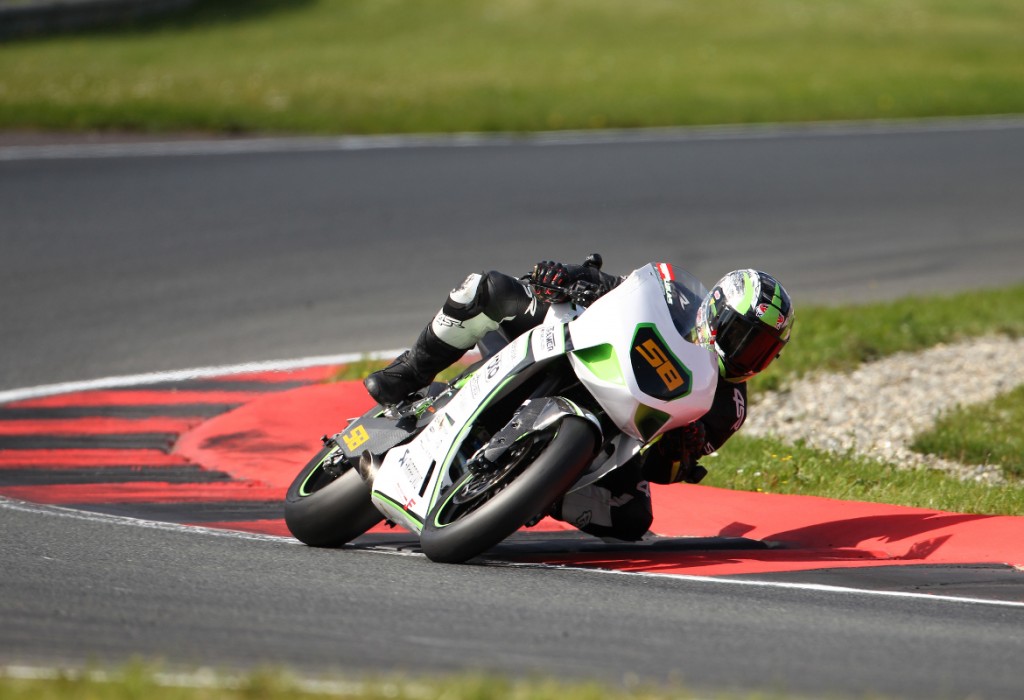 To go one’s own way – who hasn’t dreamed of that? Markus Krämer dared to do it. The graduate mechanical engineer worked at KTM for seven years as a group leader in the PowerParts accessories division. Today he manages his own company, Krämer Motorcycles, in the German town of Töging am Inn. The first prototype single-cylinder racing machines have already been produced and the intention is to enter them into small-scale production very soon.

Pelting around racetracks with motorcycles at track days is a pleasure that Markus also devotes himself to with friends and colleagues in his leisure time. The first machine he used was a KTM RC8 superbike, but this ultimately offered too much of a good thing in terms of both power and weight, so he switched to a 690 DUKE. The lightweight, single-cylinder naked bike suited him much better.

“Most hobby racers ask about power, never about riding fun,” Marcus Krämer realised, “and many of them are simply overstretched with 180 or 200hp.” So, together with kindred spirits, he consciously took another path. First the DUKE was modified for racetrack use, but ultimately a completely new bike was built around the 690cc power unit. The first single-cylinder, self-built racing machine was christened the Krämer HKR-EVO1RR and consisted of a mix of RC8 and 690 DUKE components.

HKR stands for the names of the founding members: H for Christof Henco, K for Markus Krämer and R for Nico Rothe. All three of them either made or make their bread at KTM. Developer Rothe is meanwhile no longer part of the start-up team. Krämer acts as General Manager. Christof Henco, who was responsible for PowerWear functional clothing at KTM and also enjoys riding around racetracks in his spare time, takes care of the marketing.

Eventually, the Krämer HKR-EVO2RR came into being for 2014. At 6.5kg the self-build, chrome-molybdenum steel tubular space frame is a whole 3.5kg lighter than the 690 standard production version. One design highlight is the tail boom made from XPE plastic, which simultaneously acts as a fuel tank. The sturdy swingarm is manufactured from aluminium and coated in carbon. The shock absorber, including pivot arm, is placed as close to the engine as possible. Fork and shock absorber are modified RC8 parts from WP. 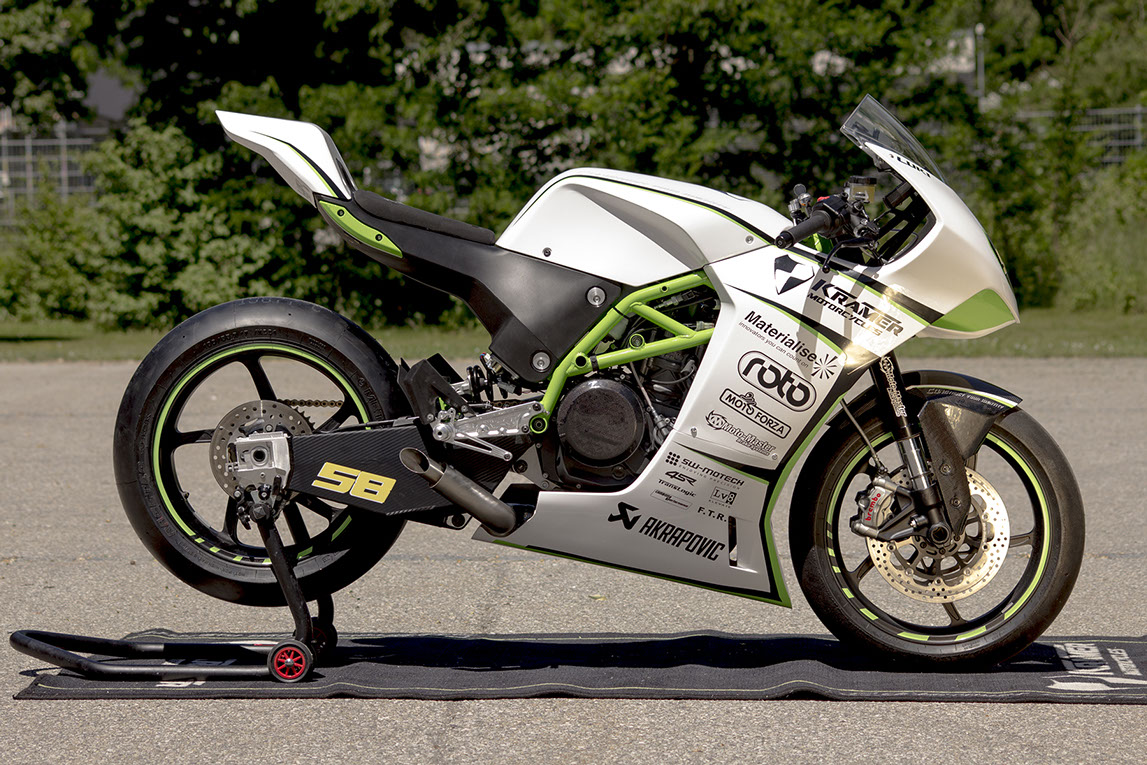 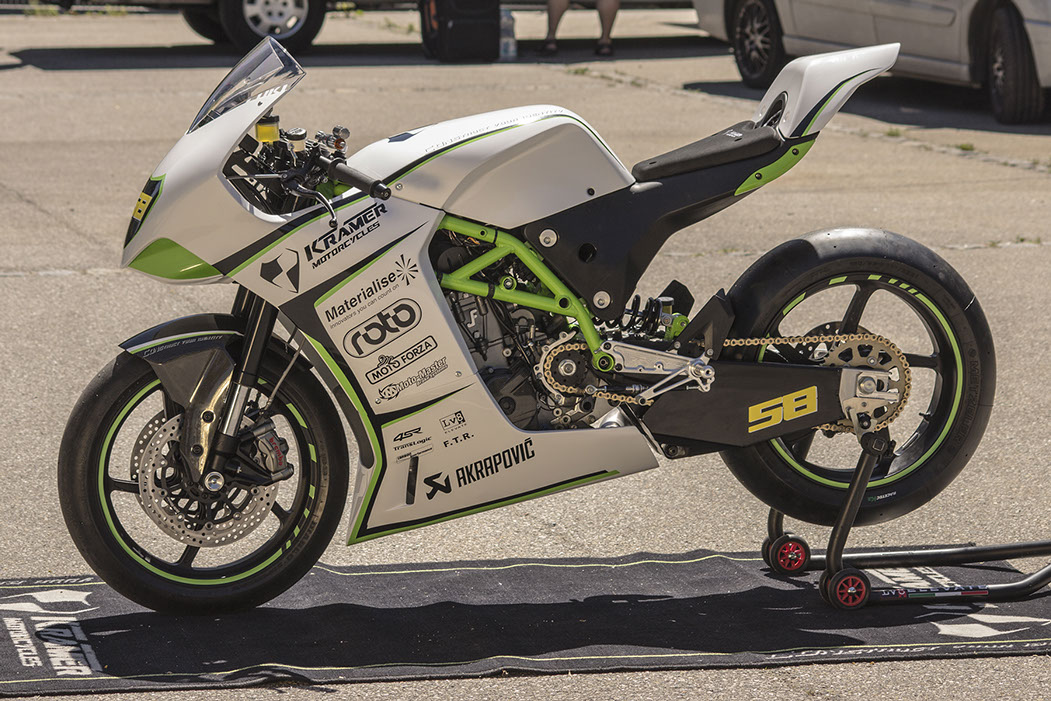 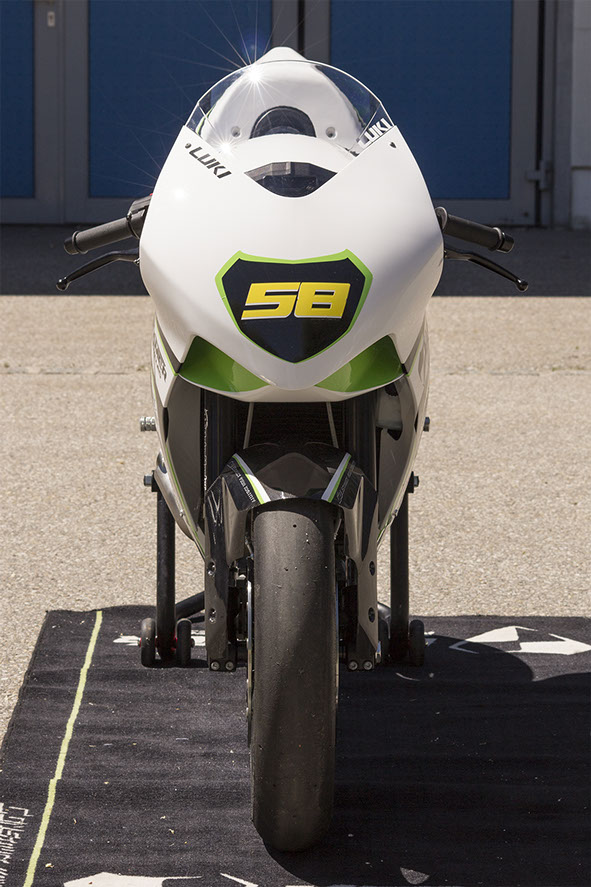 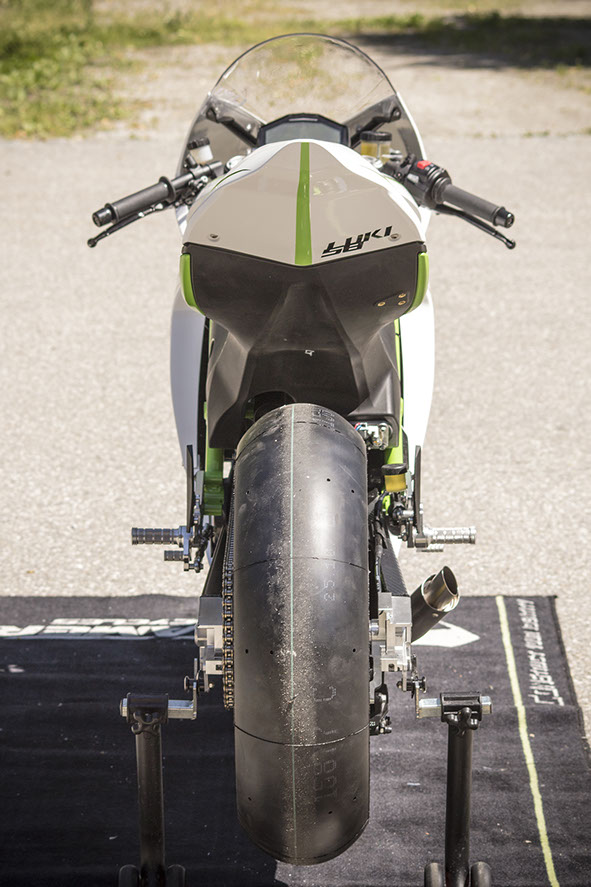 The LC4 single-cylinder engine has had even more power pumped into it by renowned tuner Josef Frauenschuh. Bored out to 790cc, approx. 85hp rip at the chain to the rear wheel. Filled with 12 litres of fuel, the Krämer supermono racer tips the scales at around 130 kilos. The highest top speed measured thus far (in Brno) is 230km/h. 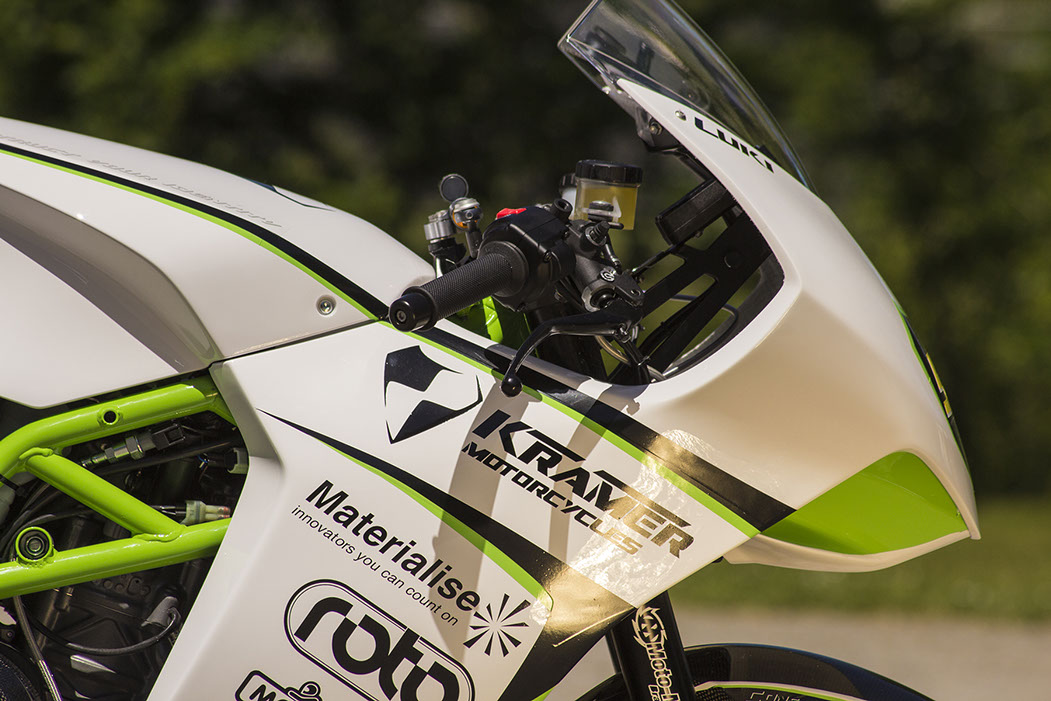 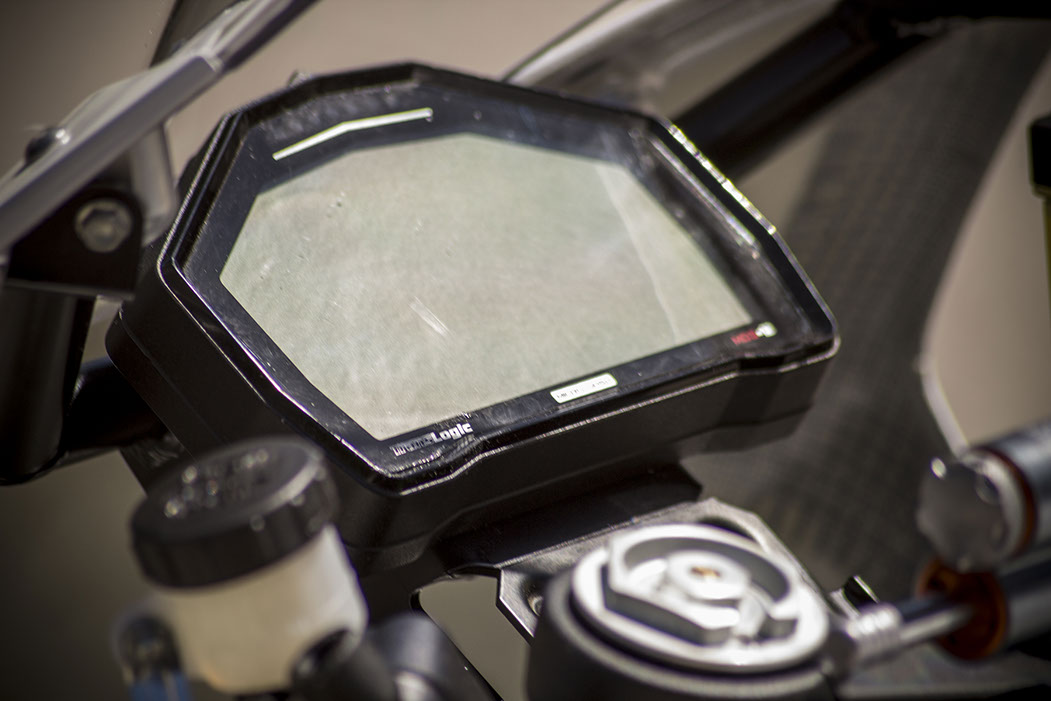 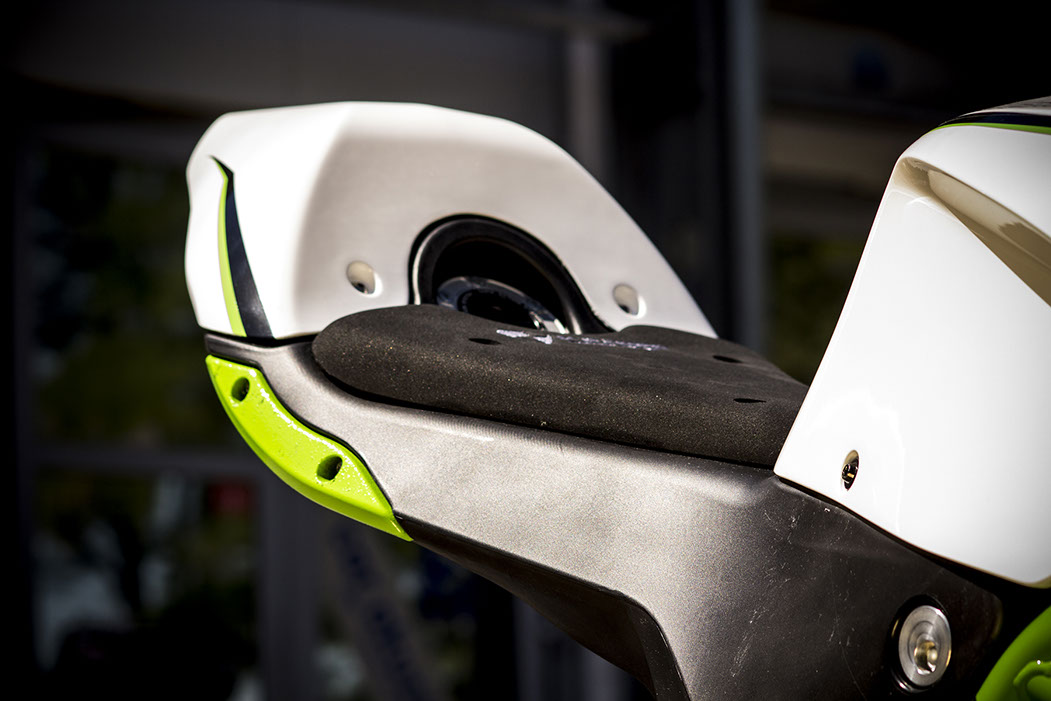 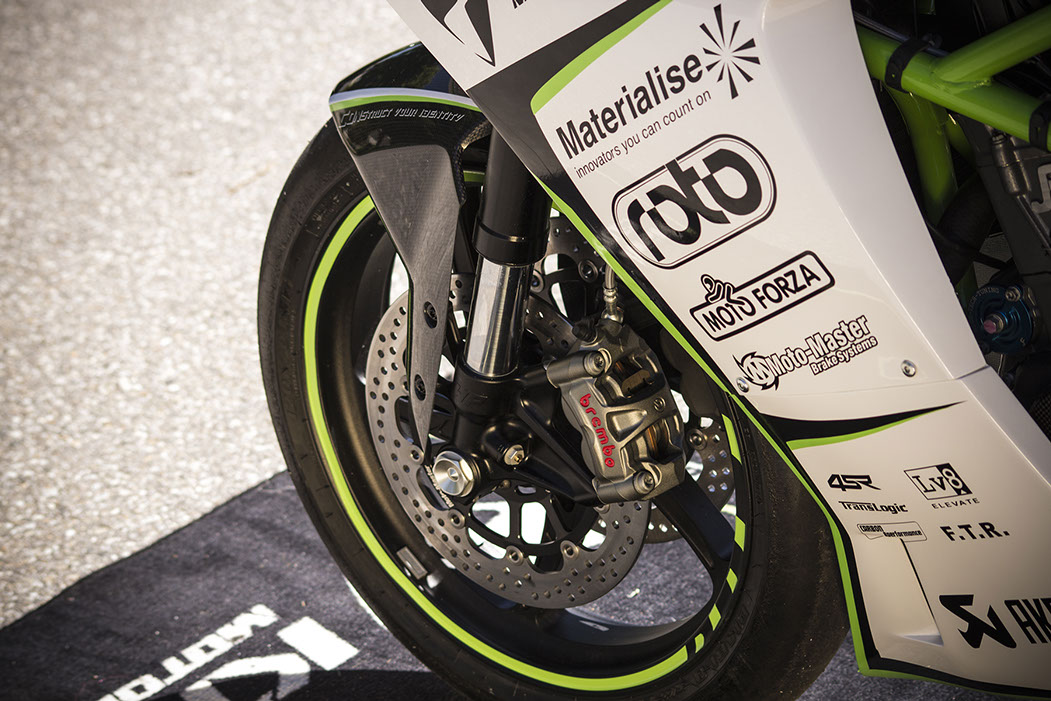 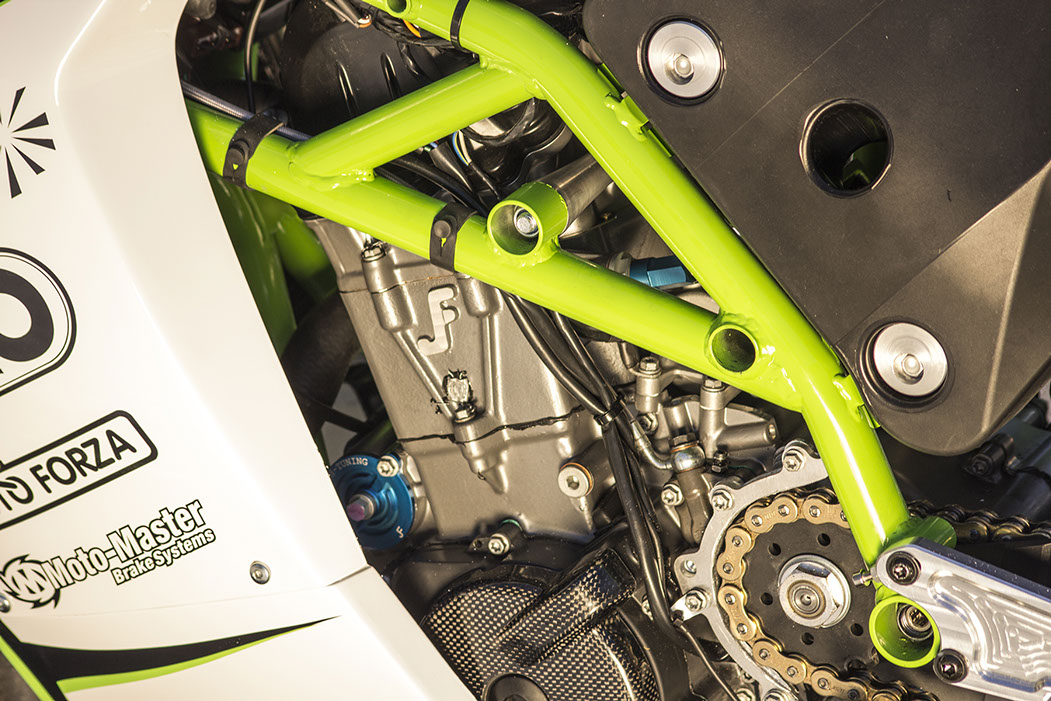 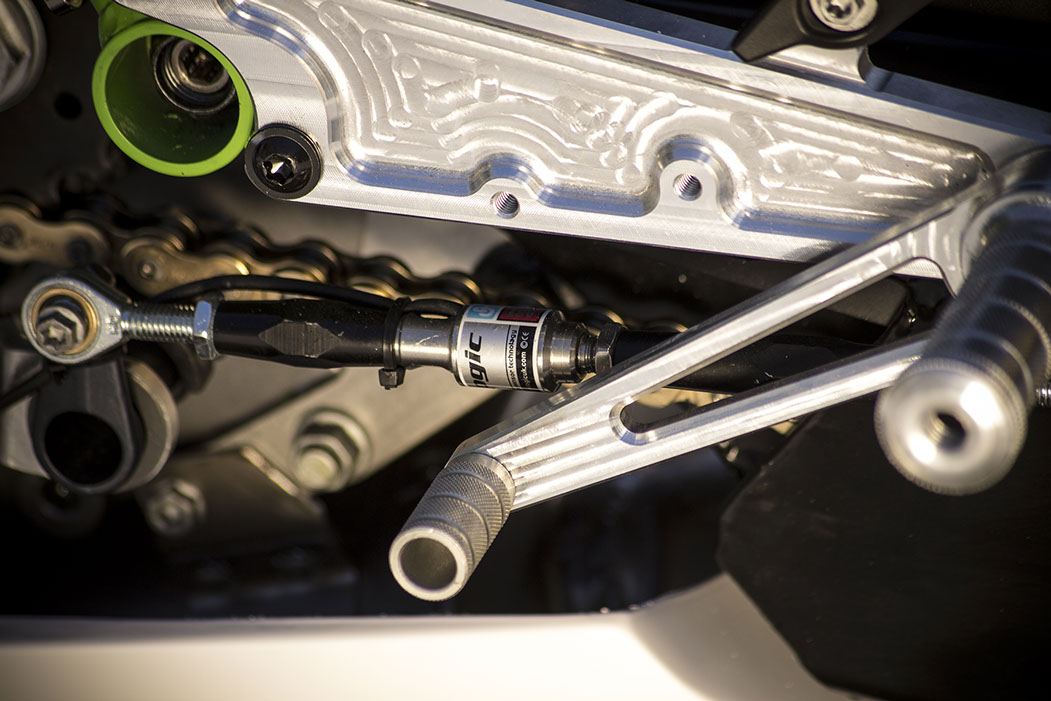 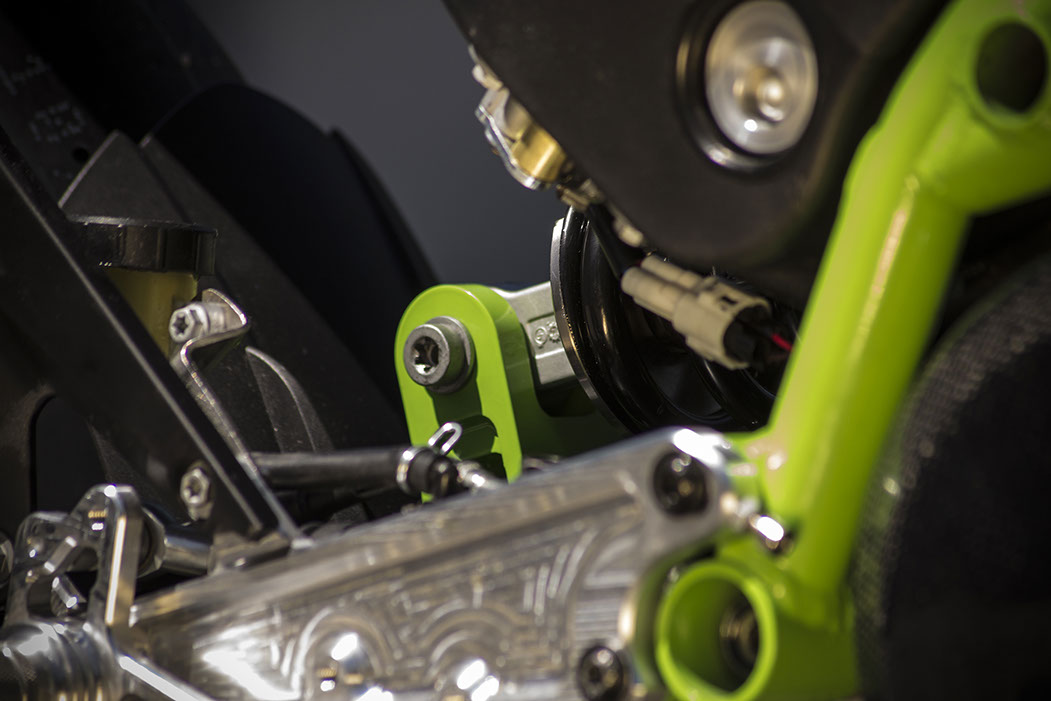 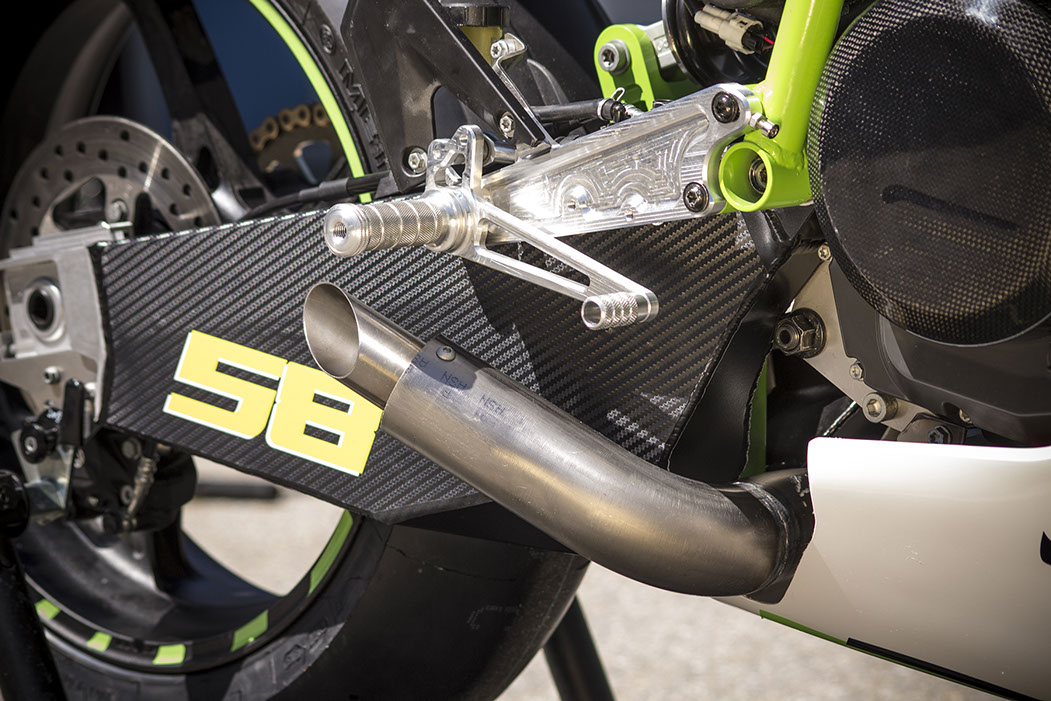 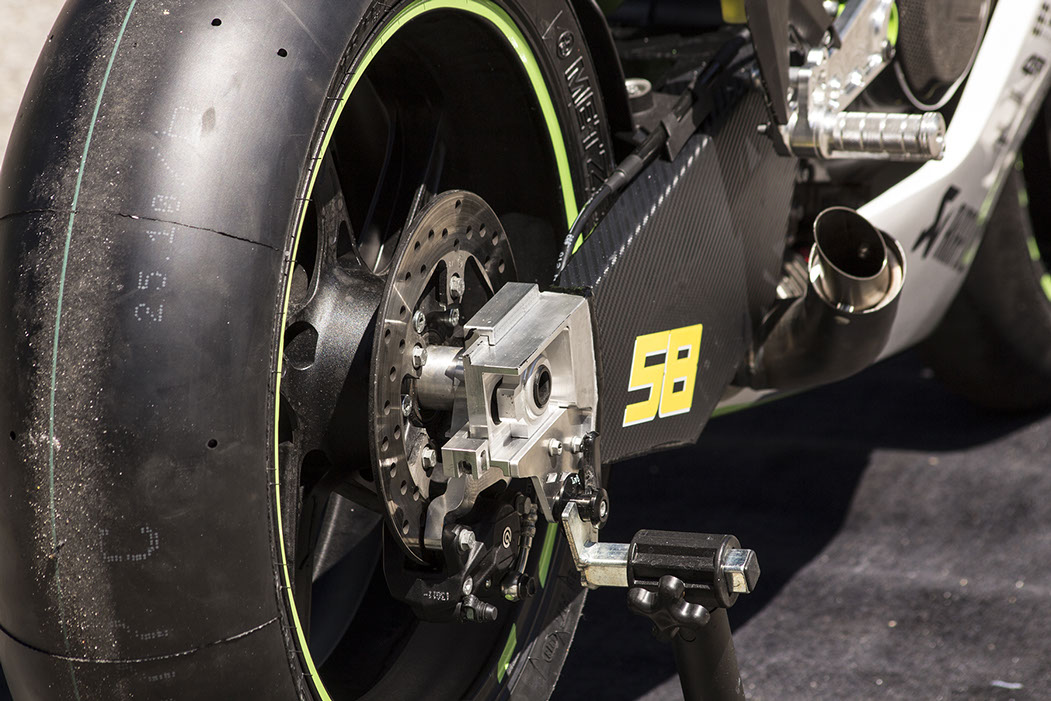 This bike has been entered by the Krämer Team in this year’s UEM Supermono Cup with young Austrian rider Lukas Wimmer on board, who won the 2013 EJC Junior Cup. In the first races at Snetterton and the Red Bull Ring, two victories and a second place were achieved, with a transmission mishap leading to one DNF. At Oschersleben, training sessions and races were thwarted by minor technical problems. In principle, however, the targeted title win is still within range. Everyone involved is more than satisfied with the performance, handling and lightweight riding pleasure of the Krämer supermono.

What does Krämer rider Lukas Wimmer have to say? “It rides well. Exactly where you want it to go. The Krämer is a real racing machine – stiff, stable, manoeuvrable and precise. The feedback from the chassis is clear; the reactions easily perceived. Whether it’s more fun to ride than a production motorcycle? Of course. After all, it’s no series slouch!” 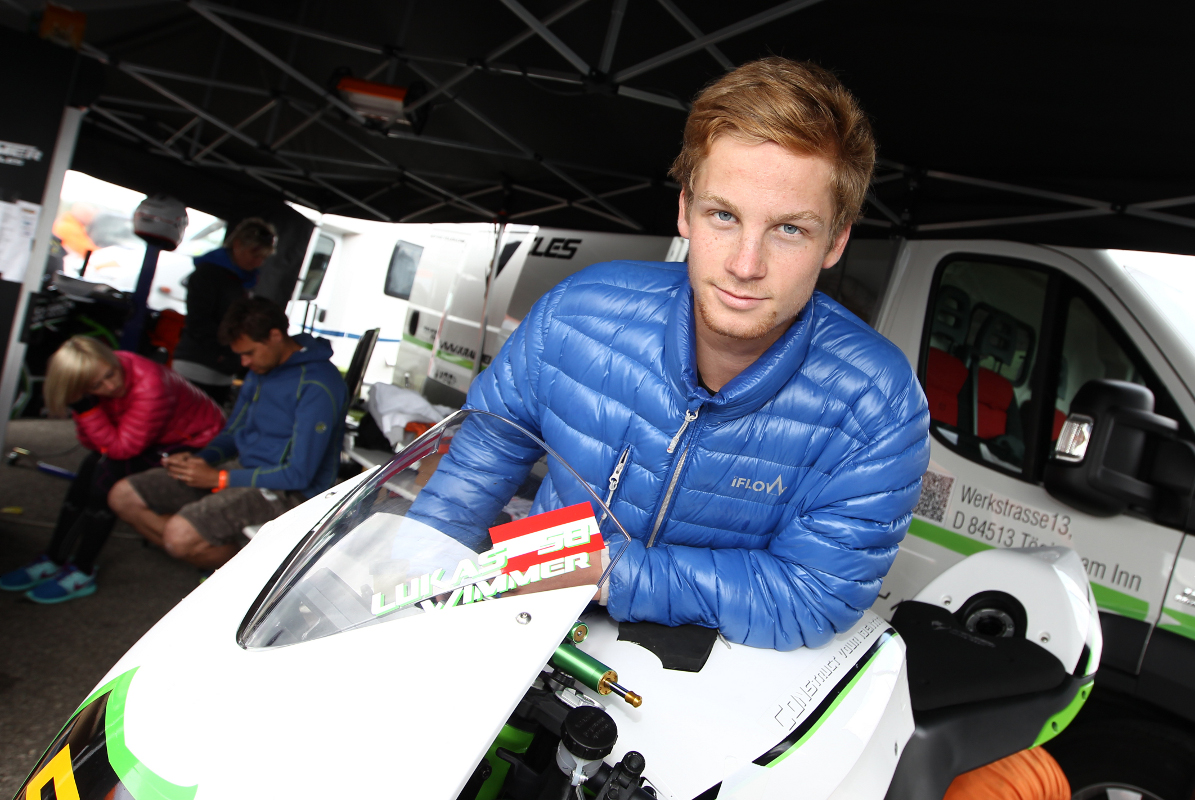 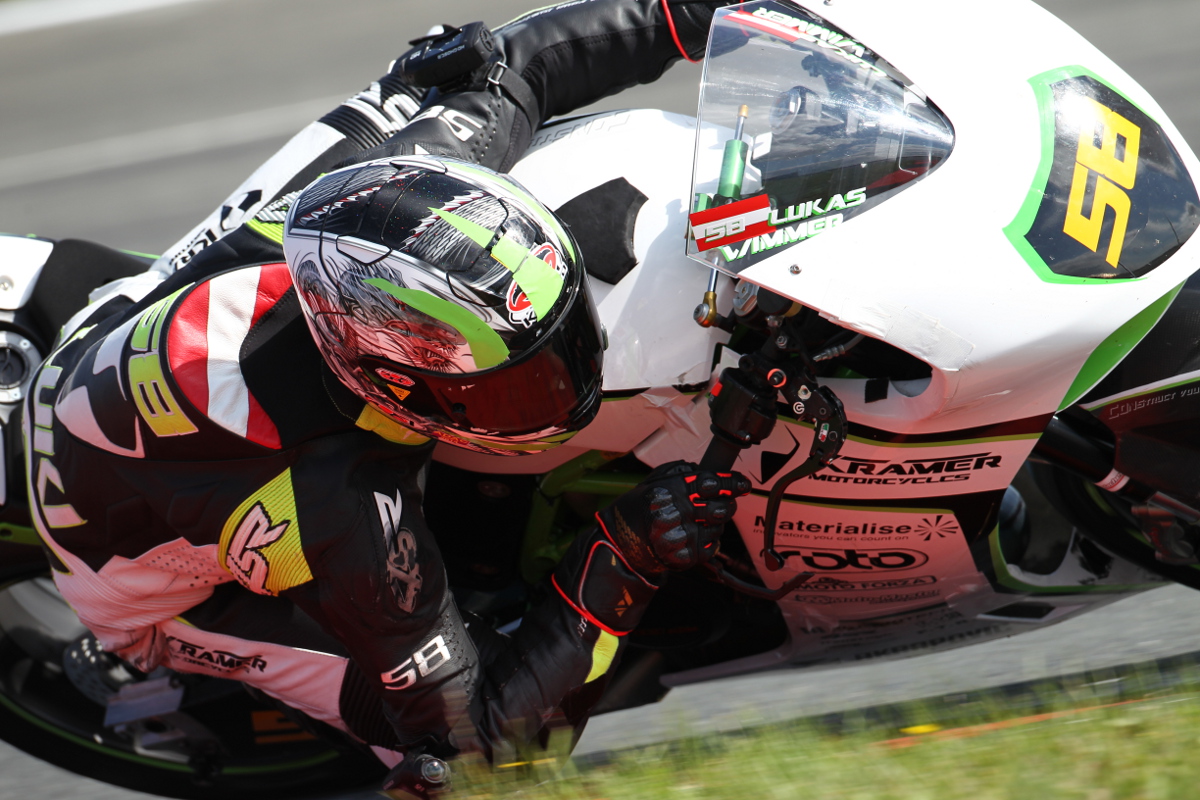 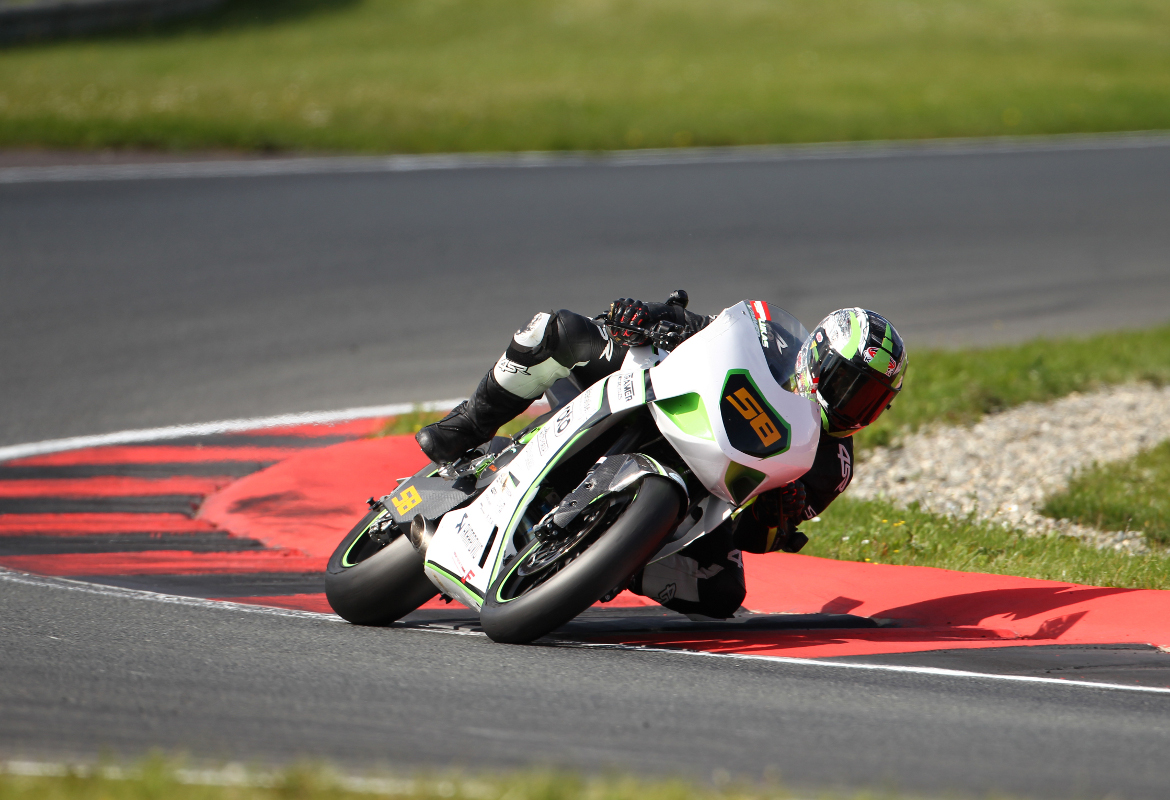 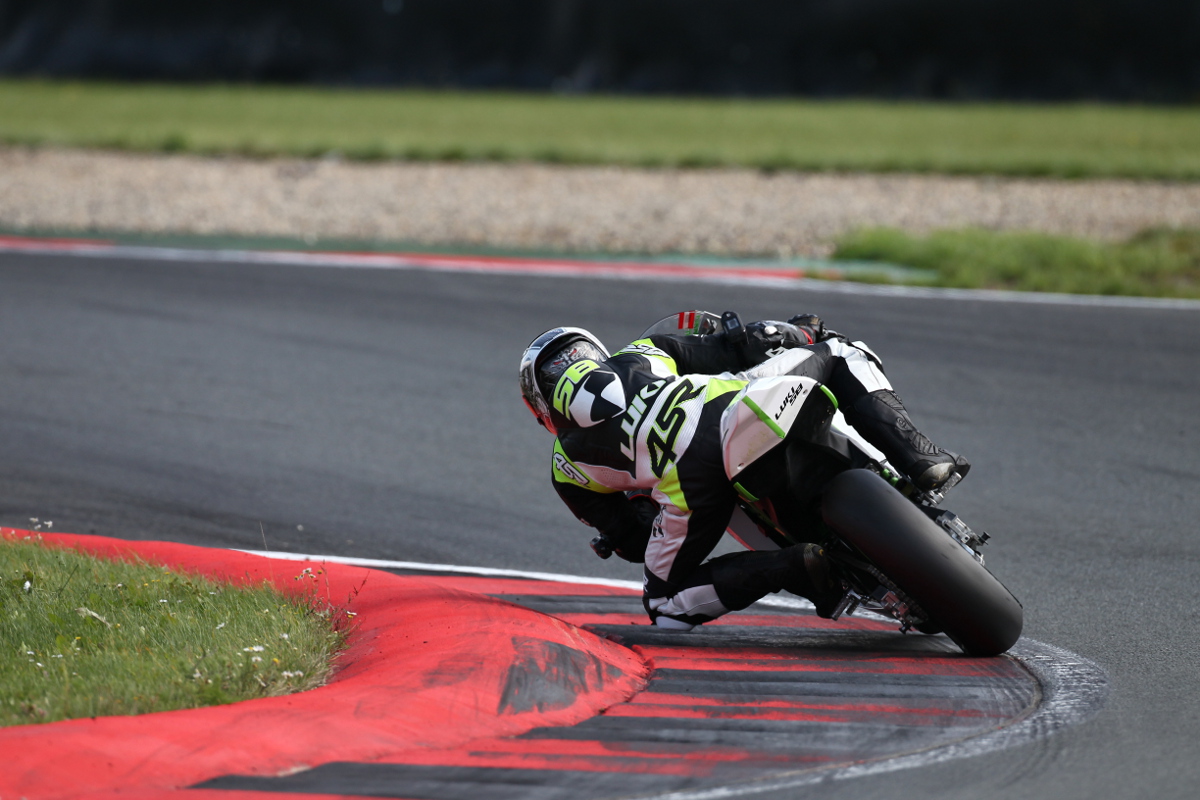 The next step will be small-scale production of the Krämer HKR-EVO2RR. The Krämer/Henco duo is hoping to find customers for 10 to 25 machines in 2015. Selling is scheduled to start in November this year, with the 70 to 75 hp basic model for racing or track days costing around 15,000 euros. At the same time, an online configurator will be launched, which will allow interested parties to compile their own choice of chassis components and add-on parts from specific suppliers and choose between various power levels when it comes to engine tuning.

The provision of single-cylinder engines fresh from the KTM factory is incidentally also assured. Markus Krämer has long since presented his supermono project to the management board in Mattighofen, who showed their appreciation for the aims and implementation and pledged their support in general. Krämer Motorcycles can therefore go its own way as a completely independent manufacturer of race-ready, single-cylinder machines, even if the bikes are “powered by KTM”.