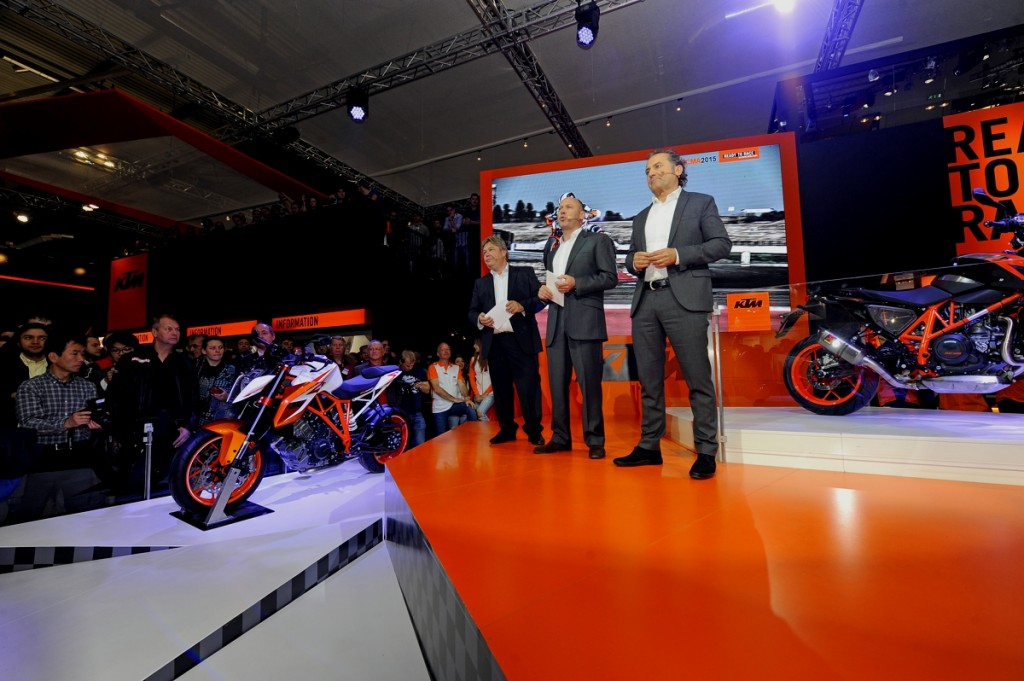 There are more people than normal on the vast KTM stand in Milan. In fact, if you haven’t bagged a spot close to the display area and where the new 690 DUKE R is unveiled as well as the menacing looking 1290 SUPER DUKE GT then there is not much chance of seeing anything (note to stand designers for 2016: perhaps a slightly raised viewing bank? It would create a nice ‘arena’ effect as well). 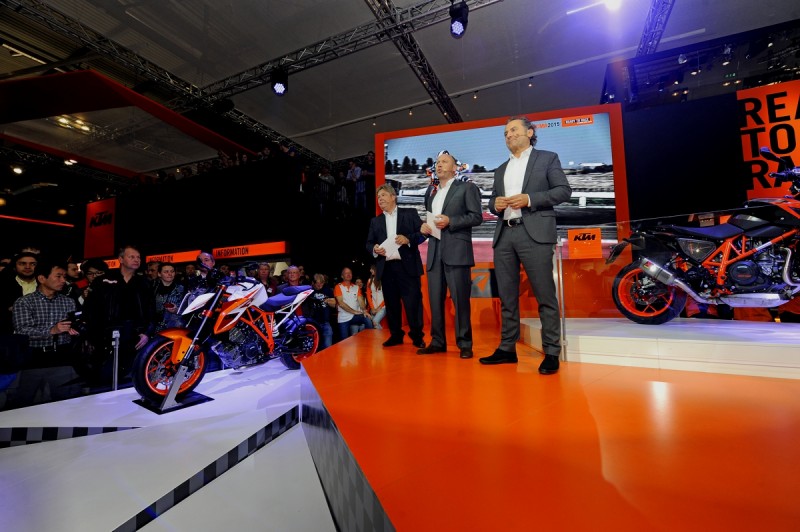 People are obviously keen to see what’s new in orange and while the 2016 offroad line – emphasized through the Ryan Dungey AMA 450 SX world championship title winning video and a chat with five times FIM Enduro World Champion Antoine Meo – is spread around the platform in all its glory the Street additions for 2016 promise some mouth-watering stuff.

We hinted at a new 690 DUKE on the KTM BLOG earlier this week and the 2016 version of this cornerstone model was clearly a signature showpiece judging by its elevated position on the stage. Increased curiosity and attendance from press and trade are not the only way KTM are growing as executive board member Hubert Trunkenpolz took pride in revealing that the company are due to hit new numbers in 2015 with sales hitting 200,000 and a revenue mark of 1 billion euros in reach. 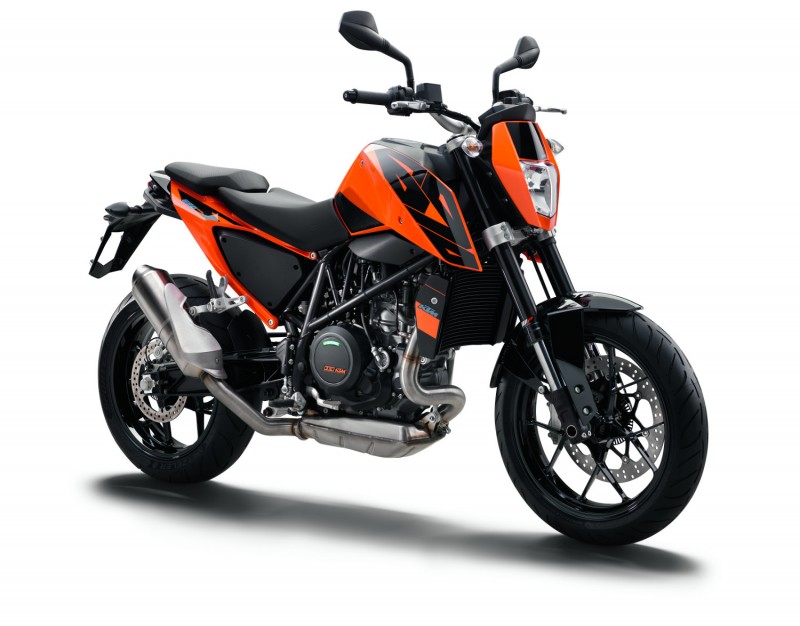 The signs of progress from within Mattighofen were evident with a look at the 690 DUKE R and a quick leg-swing over the bike firmly held in the wheel clamps. New engine configuration, ergonomics, tacho and other upgrades means the bike has taken strides to keep its middleweight sector prowess. We’ll have a further lowdown on the specs this week and some updates from the official launch at the beginning of December. Will the motorcycle be as agile and powerful as they claim?

Positioned stage center is the 1290 SUPER DUKE GT. Wow. Somebody took The Beast and injected some steroids … and then added some baggage. Around the rest of the immense EICMA show it seems manufacturers are following the café racer/custom build/scrambler fad as well as strengthening their stock of Adventure bikes. The GT seems to have found a little niche of being even more of a sporty tourer and with two added calling cards: a raft of technical elements that rival the ADVENTURE for sophistication and secondly a shape and styling that still suggests ‘bad ass’ in line with the SUPER DUKE R’s heritage. 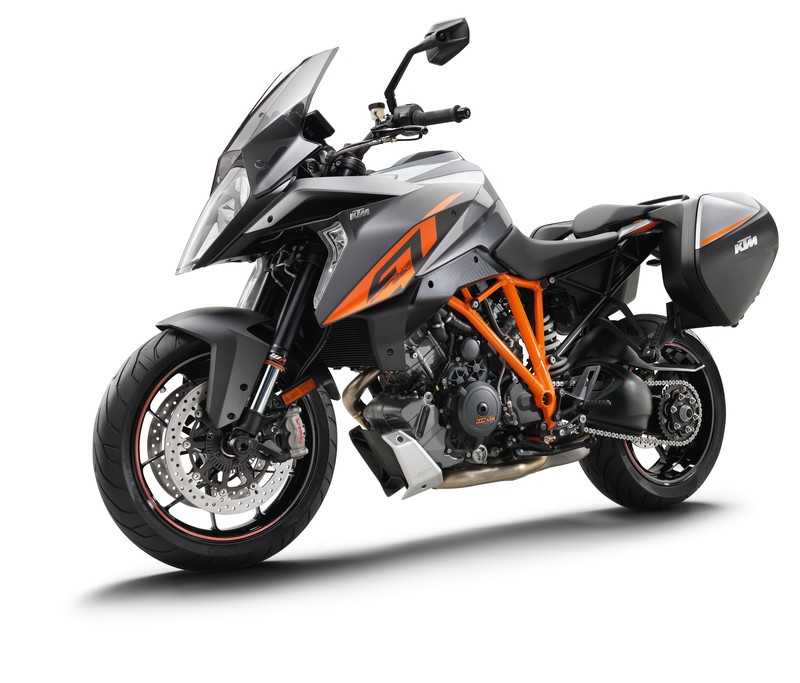 “This is a new development and we have invested a lot but we are talking extreme performance, high agility and total riding fun,” claims Trunkenpolz. “These were our main targets when we started the project.”

“It is aimed at the sporty distance rider and is full of safety and comfort devices,” he adds.

Some of those GT tech specs include MSC (Motorcycle Stability Control), MTC (Motorcycle Traction Control), C-ABS (that balances the braking power), a quickshifter and KTM ride modes. The comforts come with the longer subframe for pannier mounts, a 23 litre tank, LED daylight running lights, adjustable windscreen and other extras like cruise control and heated grips for grasping the 173hp that comes from the LC8 engine.

“It is a sport bike….but for travelling,” said fellow board member Harald Plöckinger after an eye catching video that showed the bike escaping the city for the roads of the Italian Dolomites and basically encapsulating all what motorcycling should be.

“We took the LC8 engine from the 1290 SUPER DUKE R and refined it and developed other features. It comes in at 228kg fully fuelled and has a range of hardware and software: it’s all there.”

Anyone wanting a taste of the GT’s versatility will have to wait until March 2016 but appetites were suitably lubricated under the EICMA lights.