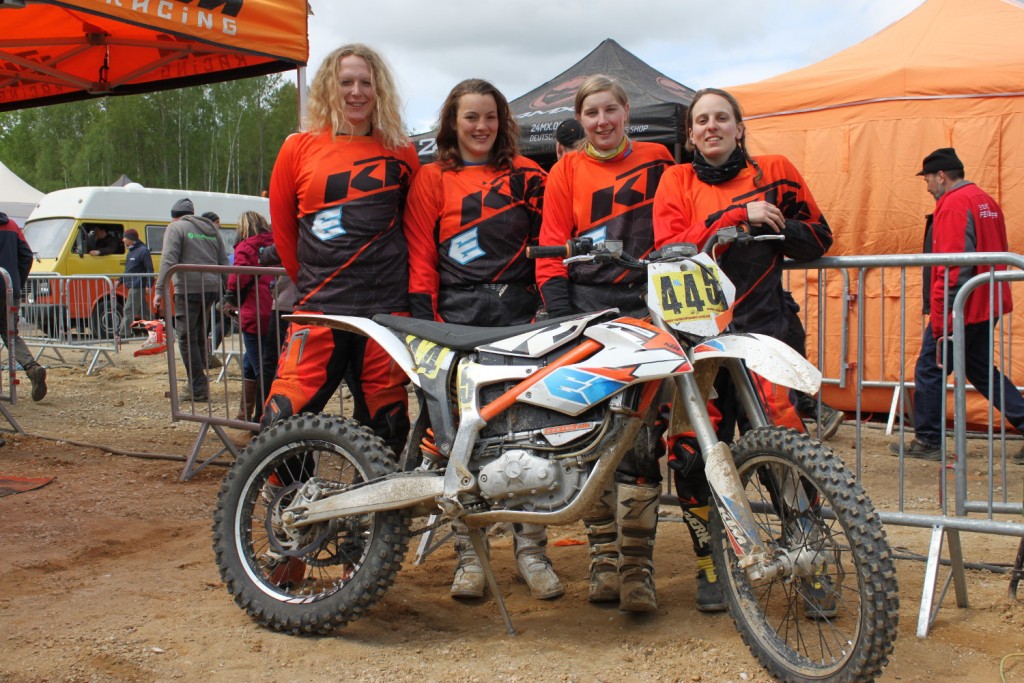 “KTM HighVoltage Girls” in the 24-hour Enduro race in Langensteinbach

Women under voltage. You want to read a fast and peculiar story from the KTM world? There are things that are rather the exception than the rule: Young women working as e-mobility development engineers at a sportmotorcycle manufacturer. Young women riding offroad. Young women who are so crazy about offroad riding that they register for a 24-hour Enduro race. That´s the story of Eva Reiter, Nina Deitermann, Nina Buchholz and Lena Schneider, their FREERIDE Es, a finish and some baffled looking men. But read what the “KTM HighVoltage Girls” have to say. 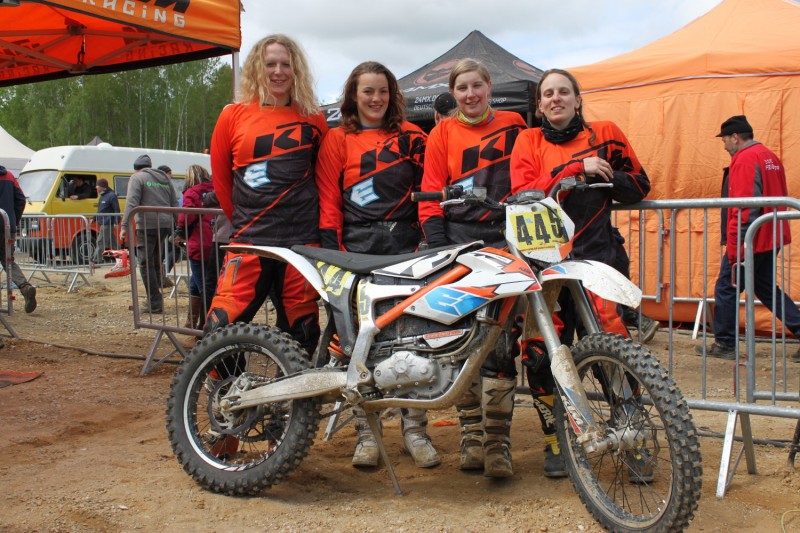 Under their team name “HighVoltage Girls” – Nina Buchholz, Nina Deitermann, Lena Schneider and Eva Reiter – take on the challenge of the 24-hour Enduro race in the German town Langensteinbach with bikes, powerpacks and chargers provided by the KTM factory in Mattighofen. The bikes were Enduro machines from KTM’s research and development department that had already been ridden offroad for hundreds of hours.

To be ready for daytime riding, but especially for night riding, the four KTM electric models were sharing tasks. Two of the four bikes were prepared for daytime riding and the other two for night riding, with LED headlights and extra lights on the side. Additional LED headlights were also mounted on the riders’ helmets, which allowed them to throw light in any direction by simply moving their head – handy for assessing the terrain before taking a bend or starting a climb or descent. This enabled the riders to clock decent lap times even in the pitch-dark hours of the night. Apart from individual adjustments to the levers and handlebars, no other modifications were made to these production bikes.

The women’s team lined up at midday on Saturday for the start of the race. The weather was perfect for an Enduro race, and Nina Deitermann got the team off to a good start in the 24-hour event. In the run-up to the weekend they had worked out a strategy for changeovers as follows: for the first four hours Nina Deitermann and Eva Reiter alternated every half hour, then at 4 pm Nina Buchholz and Lena Schneider took over in the same pattern. During the night each pair took on a six-hour stint, which left the other pair with time to relax and even sleep a little. Towards the end of the race each pair took on a further two-hour stint. The pit crew made a magnificent job of the logistics of charging and changing the batteries throughout the course of the race, not to mention making sure that the bikes and their riders were well looked after. 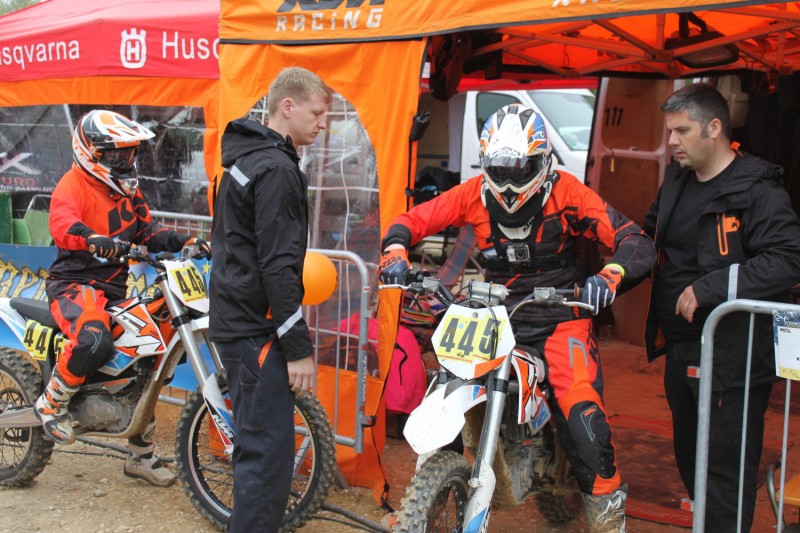 Each lap was made up of numerous climbs and descents and a number of single trails, with riders taking around 15 minutes per lap. So the “HighVoltage Girls” each rode two laps before being relieved in a flying change. As one rider rode into the pits, her team-mate was ready and waiting on her bike to get back out on the course as soon as she had been handed the race on key. Overall a change took not more than 30 seconds. 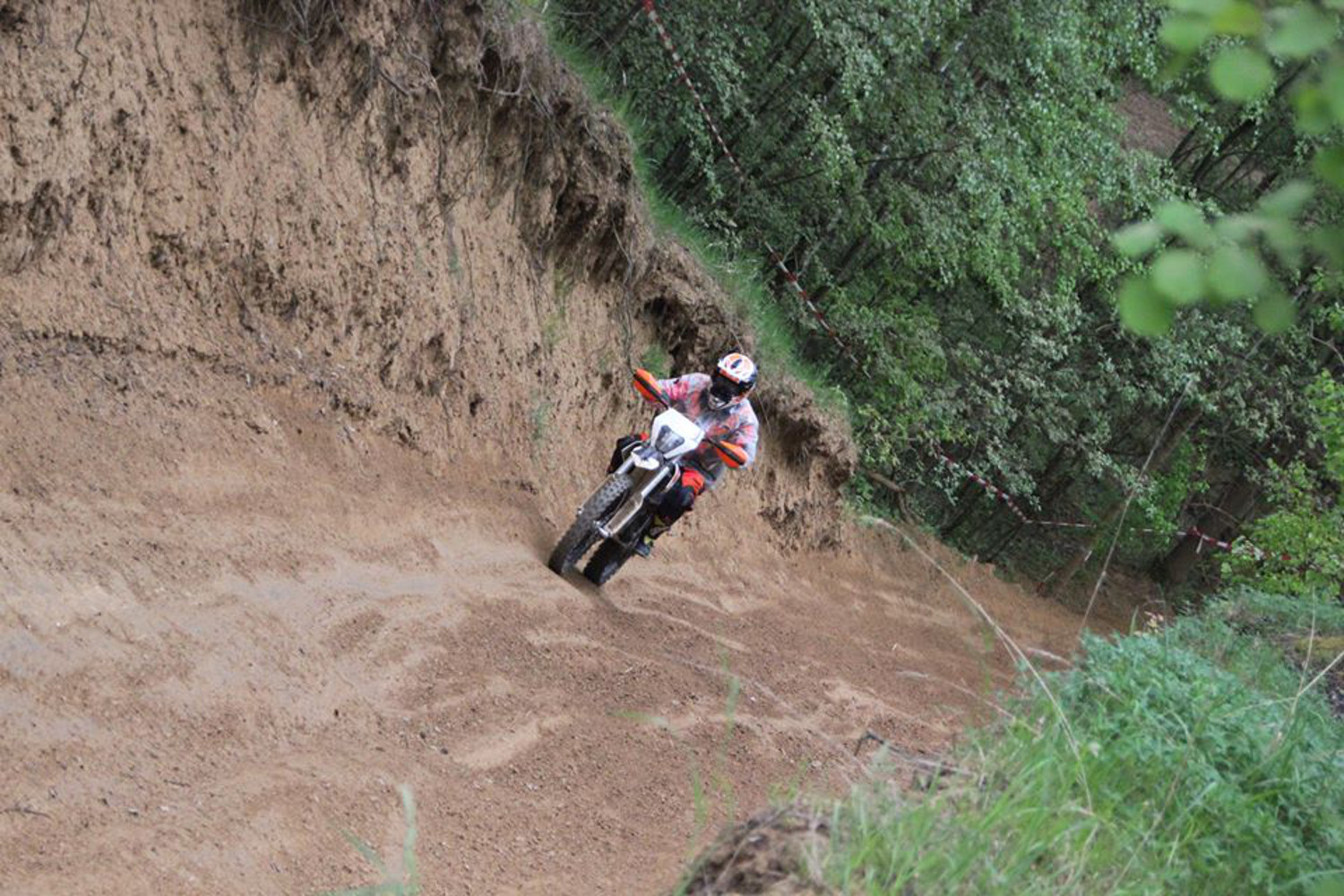 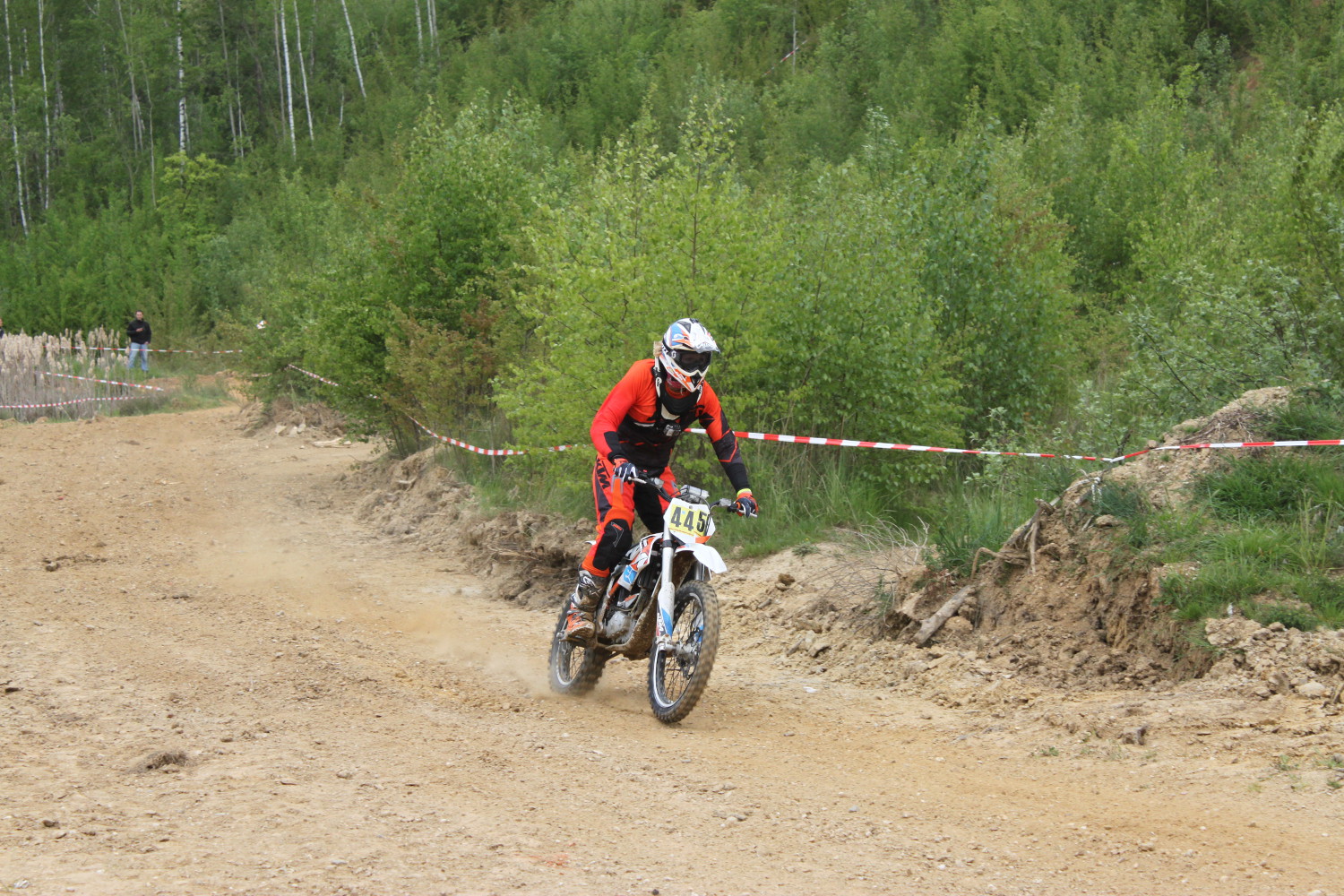 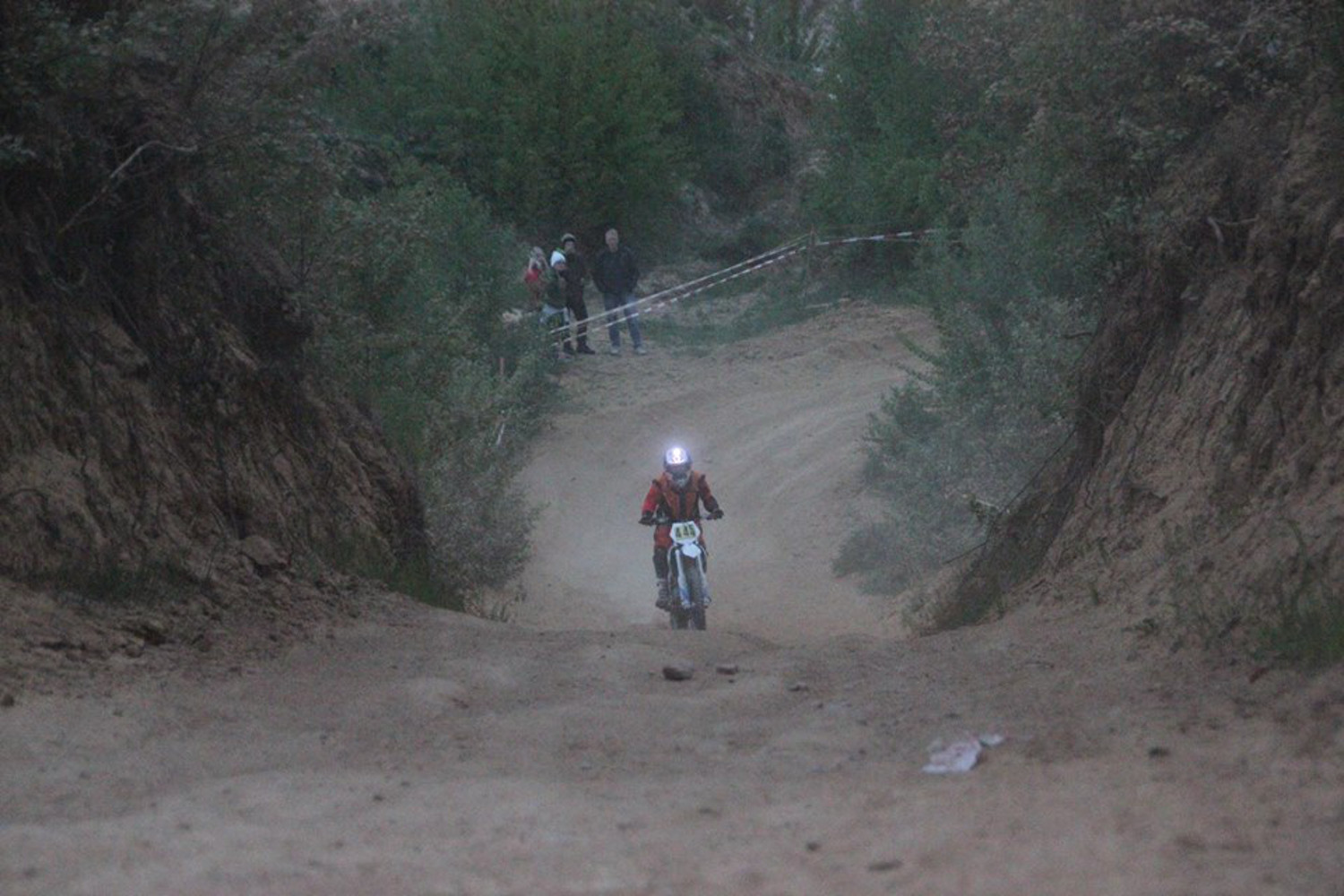 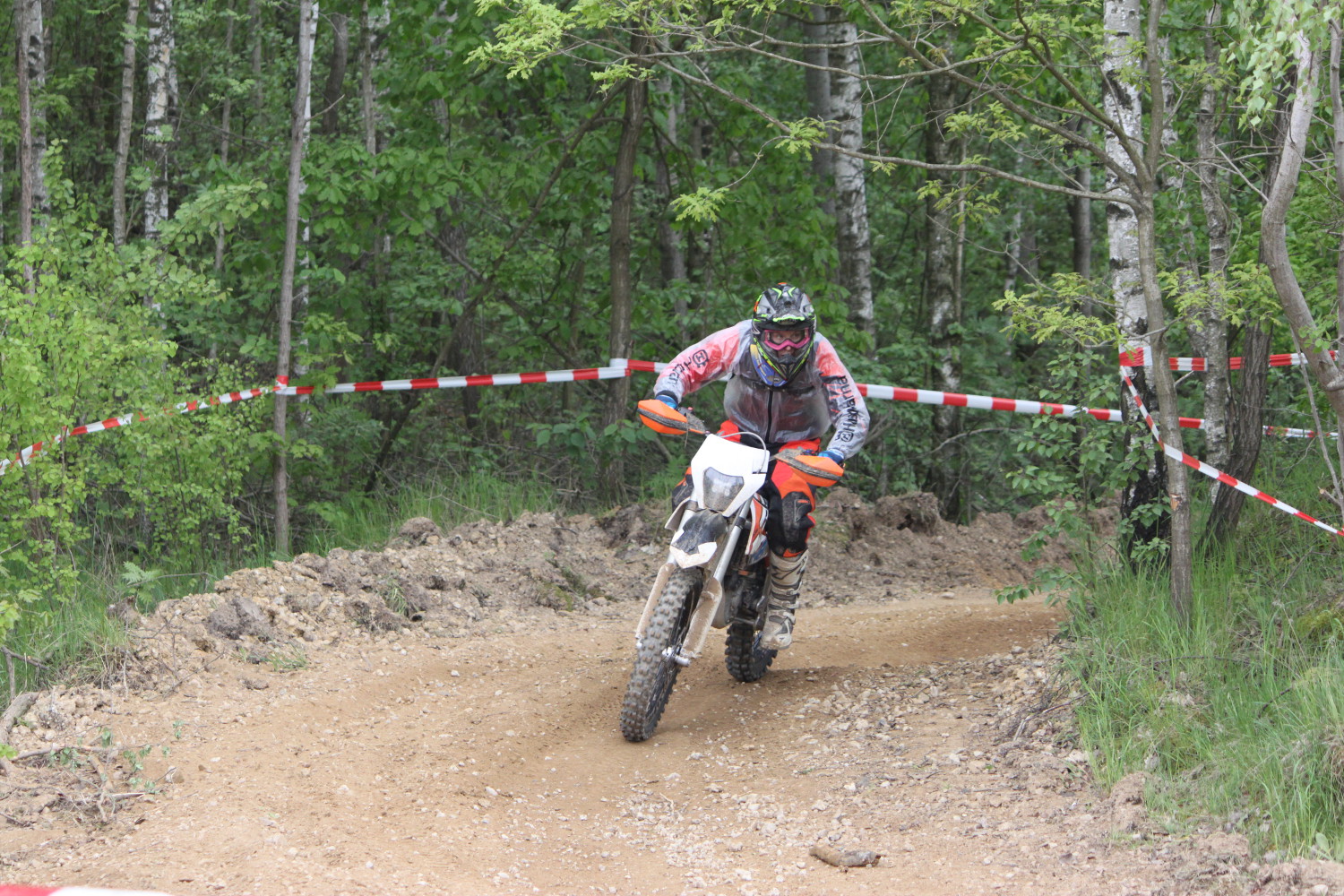 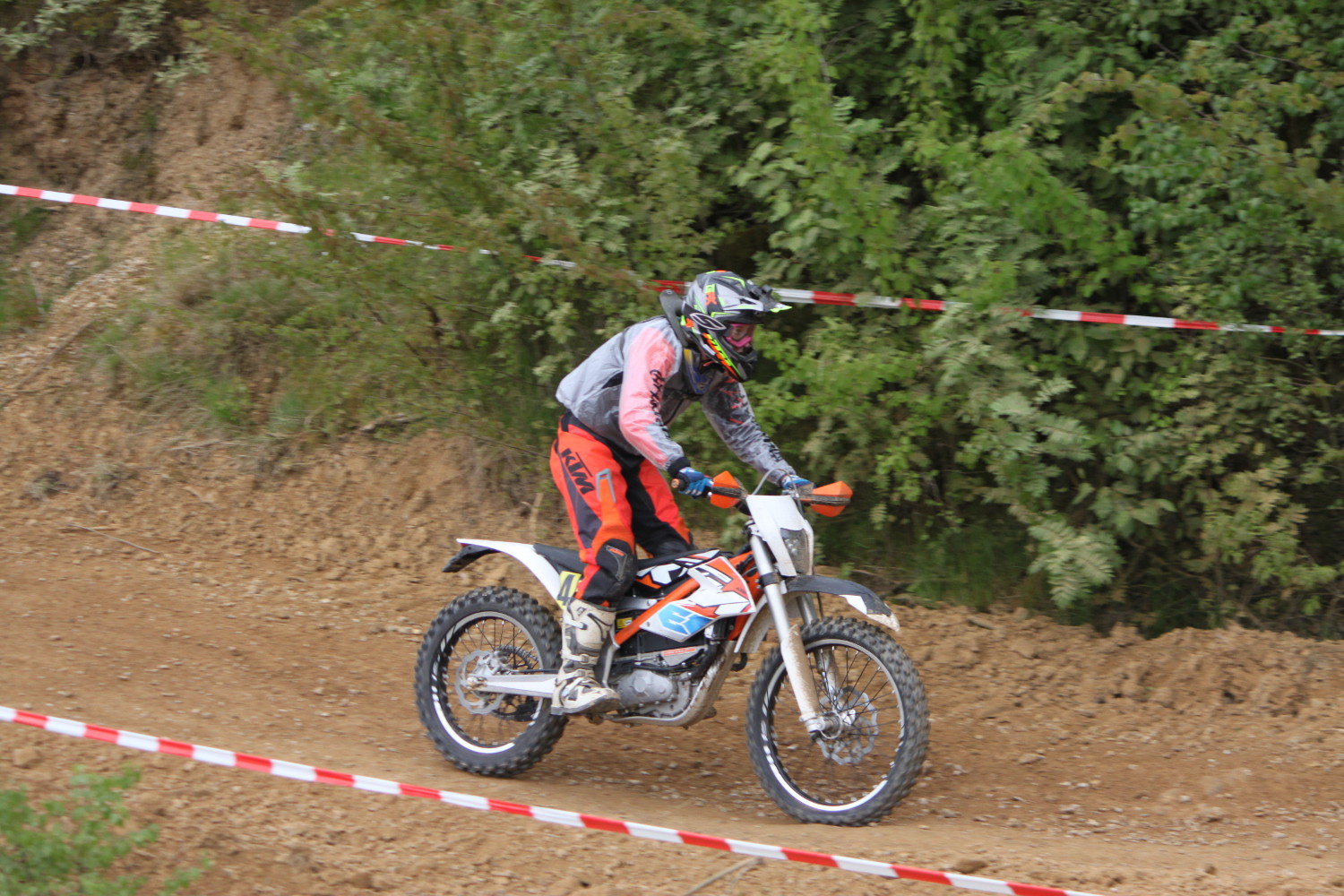 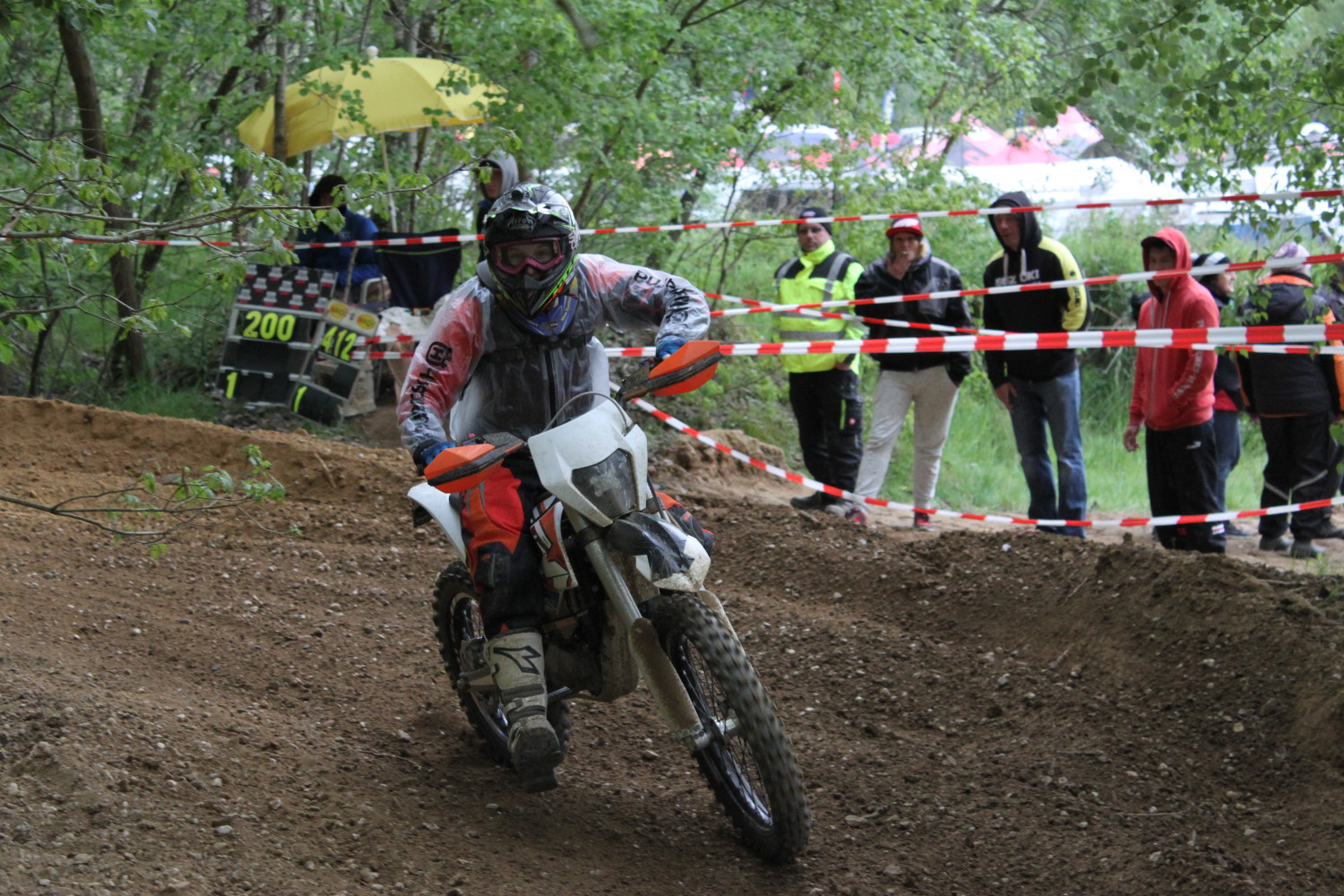 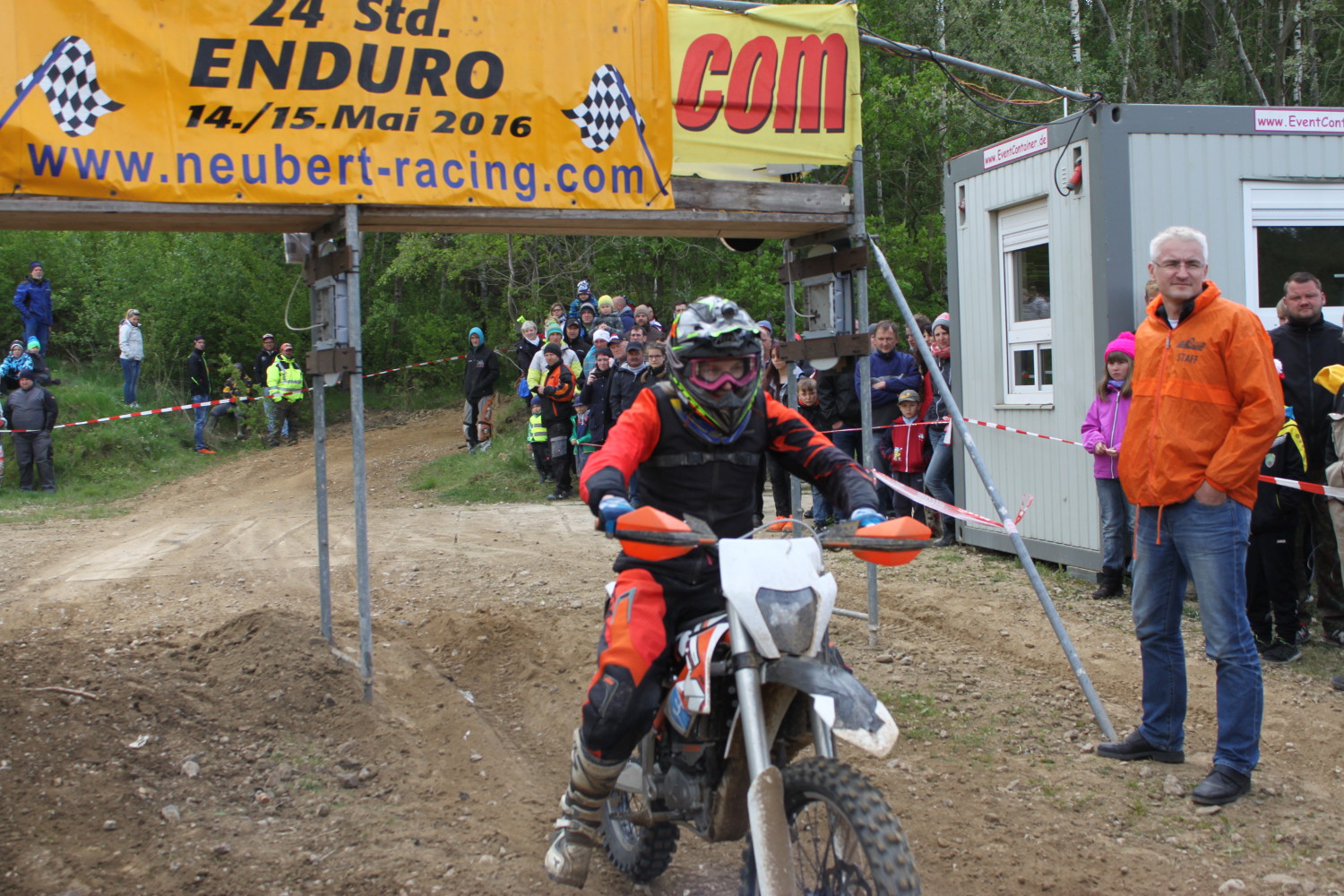 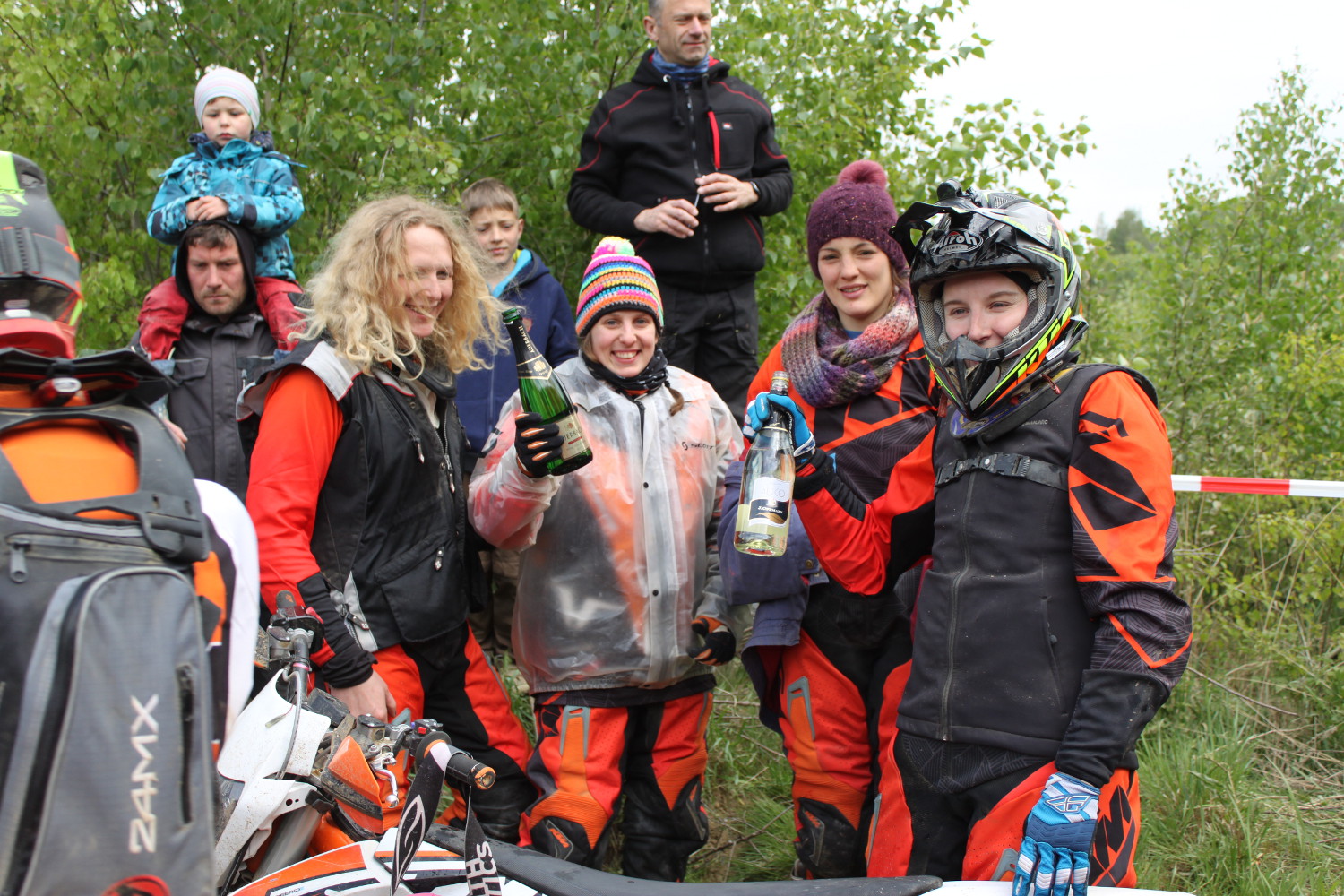 The changing weather conditions and state of the course posed a major challenge: even in the daylight the dust posed a problem, but at night in the light of the headlamp it turned at times into a virtually opaque wall. After a pleasant daytime temperature of 12 °C, icy nighttime temperatures made sure that riders’ hands and feet were well chilled. Neither naked flames nor any heating devices were permitted in the pit lane, so the only way to keep warm was with multiple layers of clothing and thick blankets. This led to slower lap times for all the competitors; during the night they were one to two minutes slower. However, the race started dry, and it was not until the early hours of the morning that there was some light rain for a short while what made the course slippery for a few laps, but at the same time it considerably reduced the problem of dust. 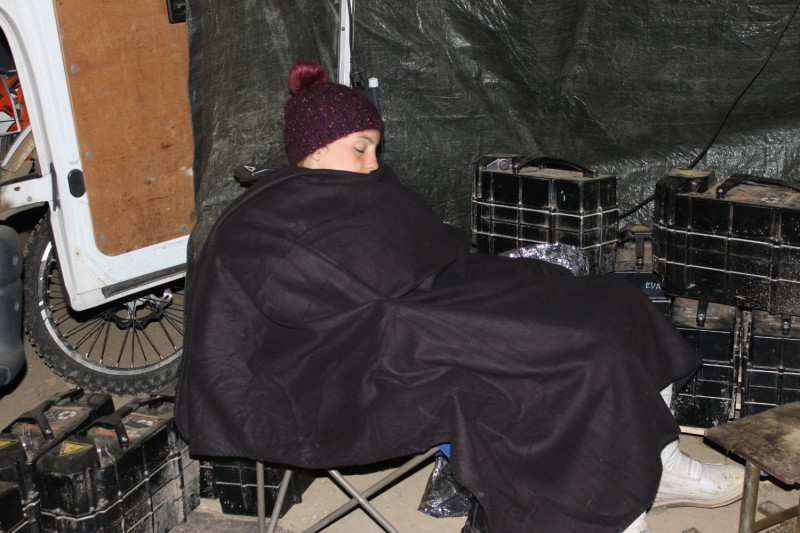 Unsurprisingly, as the race progressed, the course conditions became more and more difficult. The number and depth of the potholes, bumps and ruts increased by the hour. Especially towards the end of the race these conditions sapped the riders’ strength, which was in any case beginning to fade. As a result, all the competitors had to concentrate harder and depend on their riding abilities. 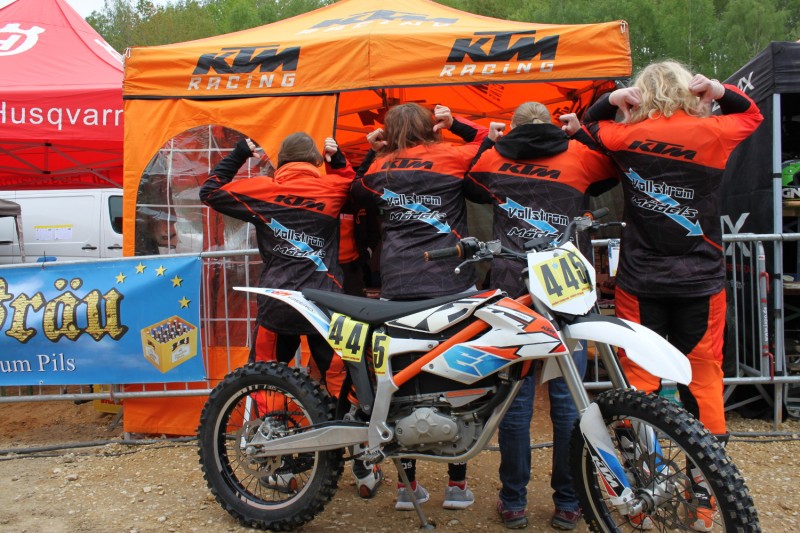 At the end of the 24 hours the KTM women had clocked up 93 laps, finishing in 39th place from a total of 60 starting teams. All the other teams were male, and those that finished in leading positions were made up of riders of an extremely high standard. Other than one punctured front tire, a few bruises and seriously stiff limbs, all the riders and bikes survived the race unharmed. All in all it was a fantastic experience, and the “HighVoltage Girls” totally nailed it. The team is more or less certain to have qualified again for next year’s race, when KTM woman can leave even more riders for dead behind their electric FREERIDE E bikes.