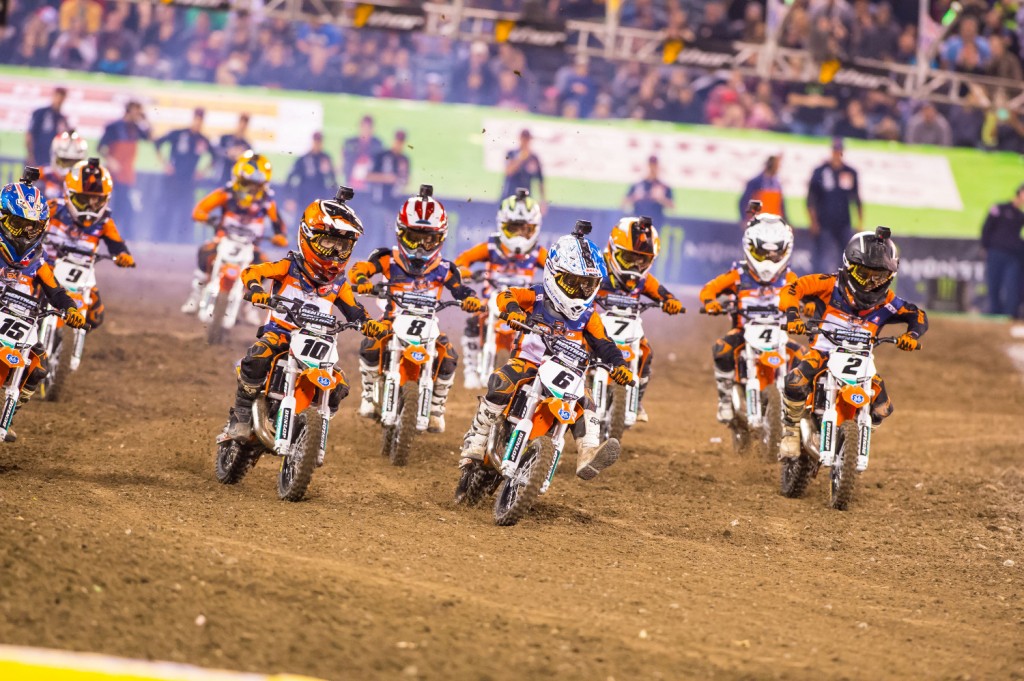 The KTM Junior Supercross Challenge (KJSC) is an important program in the USA promoting the very grass roots of offroad racing, which gives juniors the opportunity of a lifetime to live a day in the life of a factory Supercross racer. Selection is based on some special criteria, and the juniors get to ride an exhibition race around the same track in front of a bumper crowd that the likes of Ryan Dungey will also race on in the same night.

The program was re-ignited in 2013 after a five-year hiatus and it’s grown since 2014 from seven to ten rounds at Supercross World Championship events. In 2015 it’s back with a bang and in place at carefully selected larger, highlighted events where the pits are busy with a big crowd, so riders really get to feel they are living a day in the life of a factory racer. 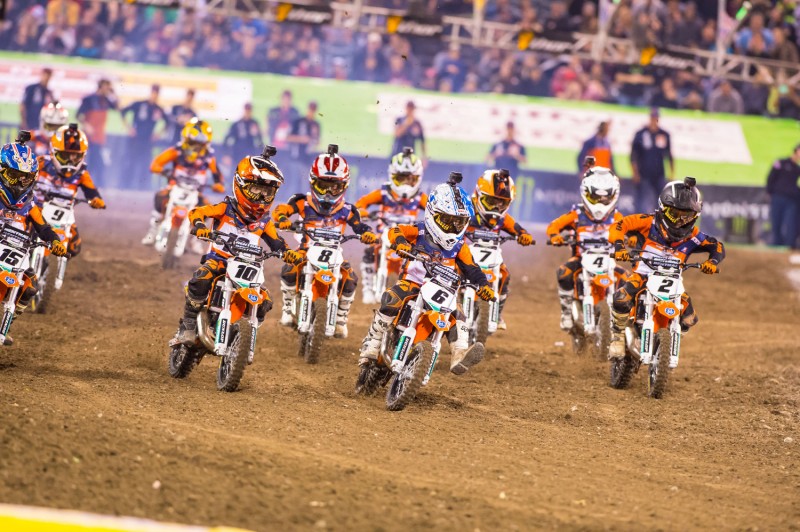 “The kids that are selected are done so at random from around the country, and we also accept international applications. We have four requirements for the program. The rider has to be seven or eight years old on the day of the event, we have a height and weight requirement because all of the bikes are set-up identically, and they also have to have above average grades at school. They have to be a good student and working well in the classroom. I do read every single application; it takes about 45 minutes every day to go through everything we receive,” said KTM North America’s Christy Brosius, who coordinates the KJSC.

There are usually around 450 unique applications, and riders can apply to every round – 150 places are available each year. 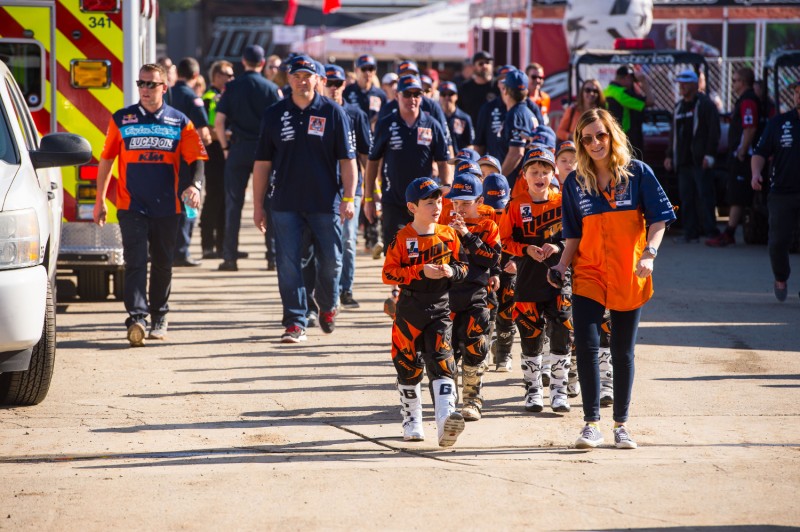 The set-up for the KJSC team includes 18 KTM 50 SXS machines that are identically prepared, two technicians and a truck driver along with Christy and Alexa Pearson, who helps on race day coordination at the events. The KJSC set-up is like any other race team as they prep on the road, the truck driver is out travelling with all the other Supercross team drivers, they go to the same events and they set everything up like a race rig. The set-up includes a hospitality area for the families too. The most important thing to note is the goal that KTM has for the youngsters; from the time the juniors step into the stadium to the time they leave, they are treated just like a factory rider. 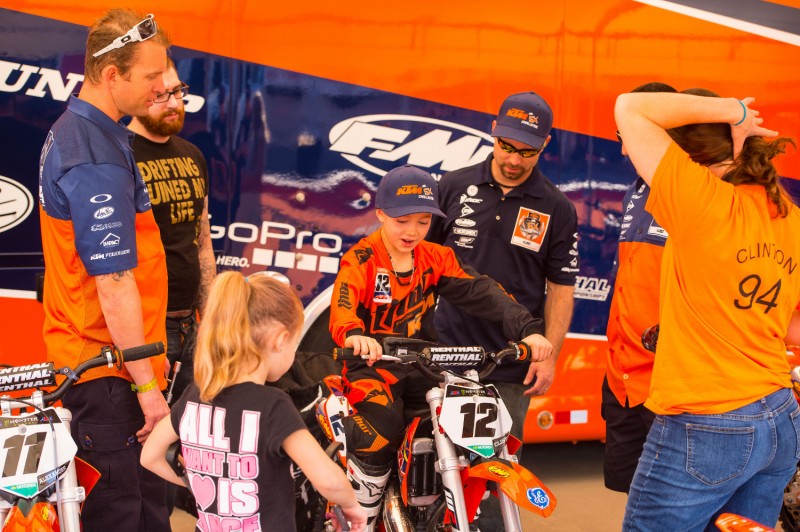 Upon getting to the event the juniors receive a set of gear from Thor, Oakley goggles, a Leatt neck brace, Go-Pro gives them a camera, and they get the specialty treatment from the moment they arrive. After receiving the gear the technicians will go over to each family of the juniors, as while riders can’t change many mechanical things, they can have their bars and levers adjusted for safety reasons. The juniors then get to go out on the track walk at the same time as all other professional riders, team managers and mechanics, which probably includes a number of their heroes.

“For those kids to stand there is really special. Most of them have never ridden a supercross track, and some of them have never even seen one. For a four feet tall person to see those triples and everything is a big deal,” continued Brosius. 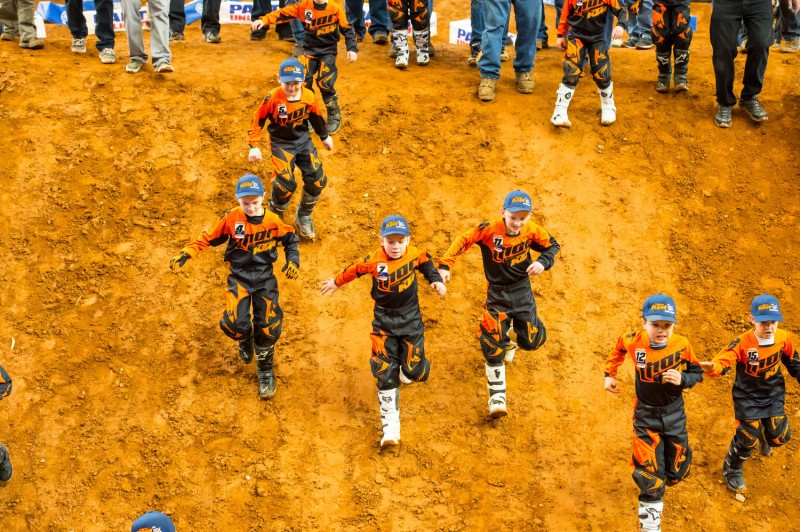 The KJSC riders get two practice sessions, which aren’t timed, as it is just an exhibition race. Their ‘main event’ follows, which forms part of the official proceedings on the same track the likes of Ryan Dungey and Marvin Musquin are racing in front of a big Supercross crowd. However, while it is a race, it’s just for fun so the intention is not to push the kids too hard. At normal junior events the parents are allowed on track to pick them up if they fall, but at the Supercross the parents are not allowed near the track so they are on their own in an environment that’s closer to pro racing. For some it can be a little daunting with so many people watching, but the achievement many of the juniors show makes the program more than worthwhile.

“The parents are only allowed in the mechanics area, and sometimes I think it drives some of them nuts because they can’t help, but we like to keep the fundamentals like a real race and also the fun element in it, with it being such a daunting course. The riders also take part in an autograph signing during the day at the truck, which is one of the most adorable things in the world. They are writing and sticking their tongue out and they’re just learning how to sign,” said Brosius. 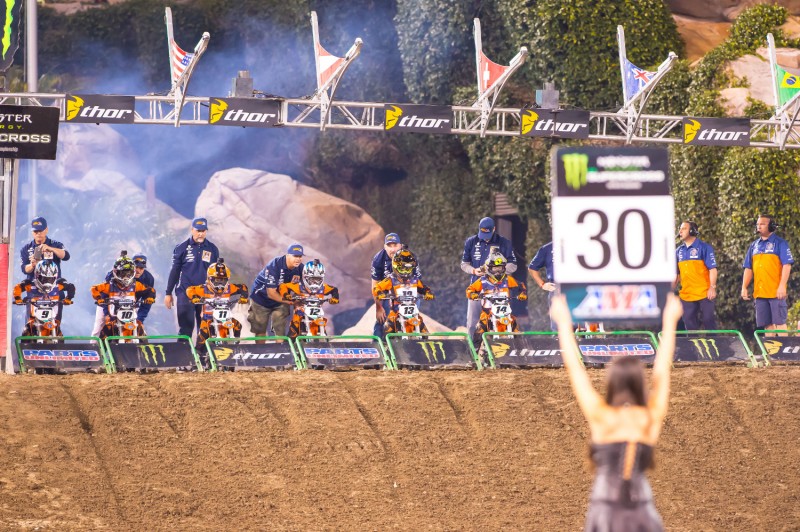 For the big event itself the gate position is provided by random number. The selection process is done after applications are gone through, and eligible applications are put into a hat and taken around the office for names to be drawn out of it.

“It might be an old school way of doing it, but also people in the office get excited because they know a kid that they picked they are going to feel part of it. Everything is then done in numerical order and picked by random.” 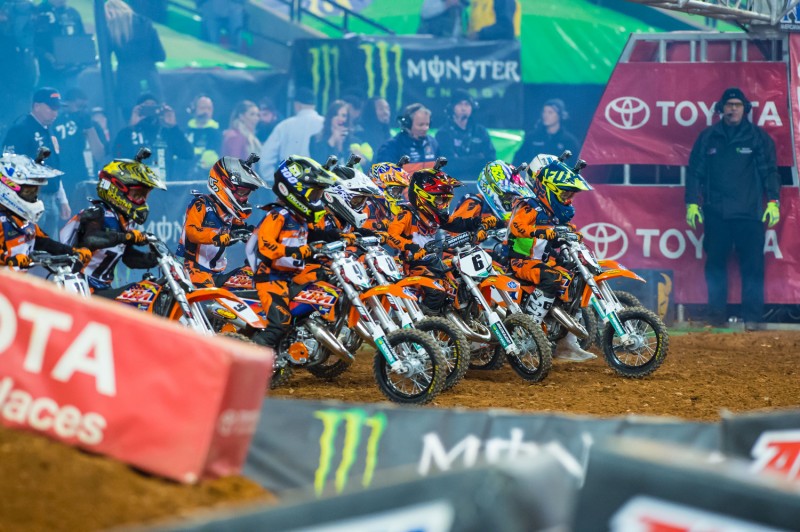 The beginning of the KJSC was originally centered on brand recognition, as when it started in the 1990’s KTM was not well known in North America. But now the KJSC is about KTM promoting motorcycling from such a young age, as this company is the only brand that youngsters can ride with from four years old to the end of their career. It also promotes racing as a family sport, as it’s not just for professional riders, although it can be aspirational to give them an idea of what it would be like to live like their heroes.

“Our Red Bull KTM factory racer Ryan Dungey did the program when he was younger and so did Jessy Nelson, who is now on the TLD team. Taylor Robert also did the program and they are all now professional racers. It’s always been an exhibition race. All of those pro guys remember the day, and how cool it was that KTM gave them that opportunity. It’s so unique to see something that’s grown over 20 years and that he can still remember that day, while youngsters are now watching them. It’s also a lot about giving back to the sport,” continued Brosius. 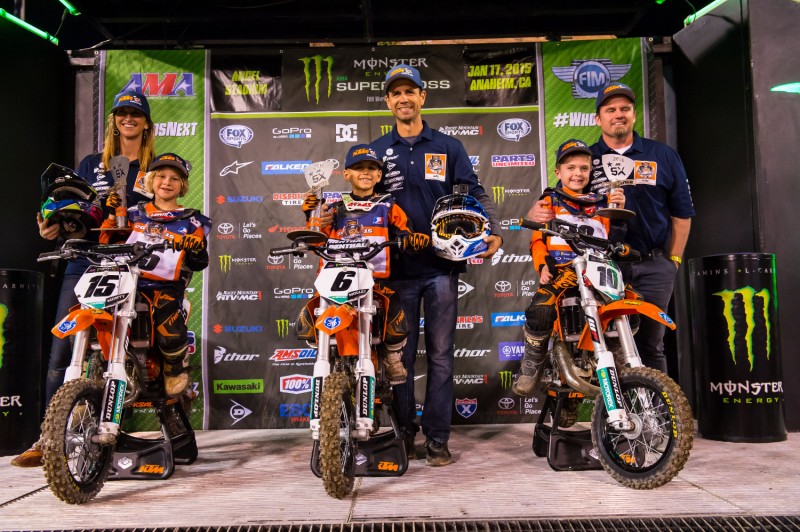 For the KJSC 2015 the bike is the KTM 50 SXS, which is the model sold in the US that is modified, but can be run in the junior classes. It comes with an Öhlins shock and an FMF pipe and silencer. FMF is a really big supporter of the program. Oakley provides the riders with some goggles, Leatt and Go-Pro are big contributors for the KJSC, as they give every rider a neck brace and a camera to keep. After every round KTM submits every SD card from the Go-Pros to Feld, the race promoter, and they have all of the footage from every youngster that’s done KJSC in recent years. DC provides each rider with a pair of shoes, Dunlop supports the entire team with tires and a free tire to all the youngsters, which just shows that the value of working with young people is a shared vision.

“It’s great we have all of this help and support, especially for those kids who may not have had the opportunity to use any of these products. Leatt has a great support system and there’s a rider rep that comes to every round with us to fit each kid out with the correct brace, talk to the parents and give them the knowledge, which is better than ordering online and not having that face-to-face contact with the brand. It’s not a requirement to be a KTM rider already, but we try to ask they help us by supporting wearing the products we provide during the event. We’ve even managed to convert a few to go orange.”

Financially the KJSC is supported by its all-important sponsors, but of course KTM heavily invests in the program, as taking a large semi to all of those races is of course costly. The outcome cannot be counted, and although it’s not a race, it does give the company the opportunity to see 150 amateur riders that they may have not seen otherwise. Some of the riders that are in the Orange brigade junior race team have come through the KJSC, and they may not have had the opportunity otherwise to be in a setting where they can directly talk to KTM had they not done the program. 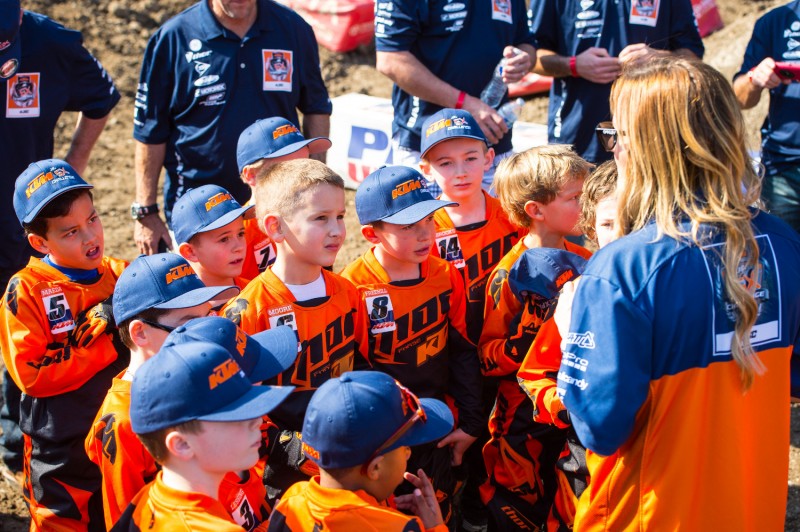 Talking to Christy, who organizes the KJSC, it seems as though that feeling of giving back at grass roots is an incredible one, and to see the riders grow over the years is something special.

“I do a lot of other events too, and our department is growing, but everything I do is motorsports related. I always tell everybody I have the best job in KTM. I get to make 150 kids the happiest kids in the world. I call them all individually when they’ve been selected and for me it’s very fulfilling. I used to be a volleyball coach, but to be part of something like this is so exciting and so nice to give something back. Every time I go to a KJSC event it kind of feels like me loading up my bike and going riding with my dad. It brings back my memories from when I raced, and if I was a kid with that opportunity then that would have been the coolest thing in the world. I also work a lot with our amateur racing team so I get to see the progression made after this.” 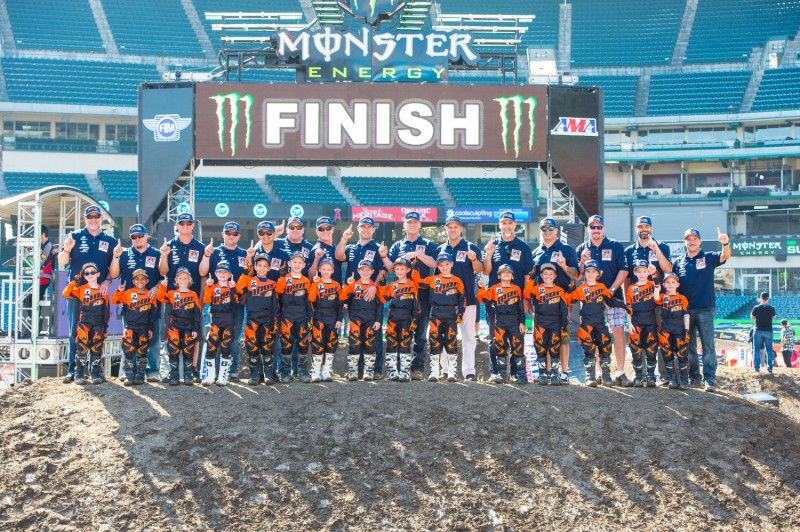 More information about the KTM Junior Supercross Challenge at www.ktmjrsx.com