Why is the German KTM SUPER DUKE Battle – in which 990 and 1290cc SUPER DUKEs compete together (in separate classifications) with organisation and support provided by KTM dealer Konrad Schittko – so unbelievably popular? It’s best we let those involved explain it themselves … 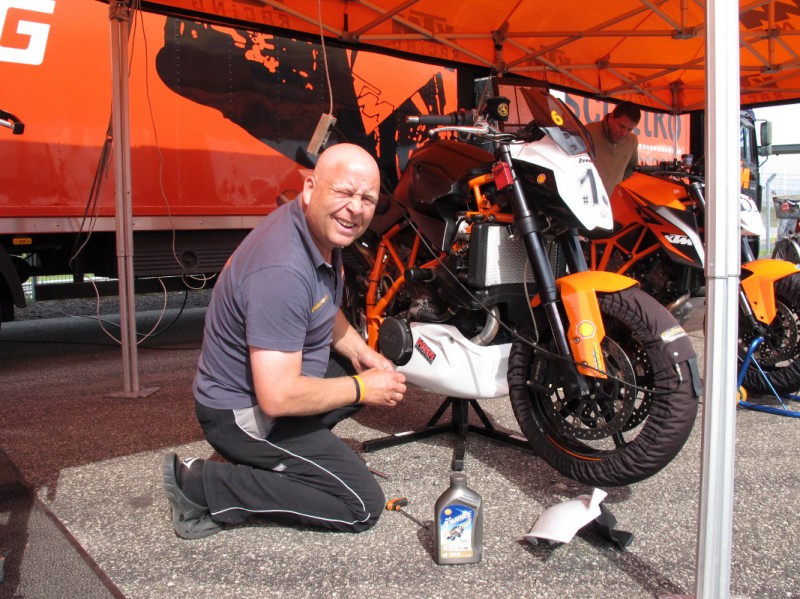 “The decision to ride the SUPER DUKE Battle was the best I’ve ever made, after wife and child of course. I’ve been involved since 2008. I’d seen beforehand that it’s a really awesome family sport when I made a guest appearance. I just had to take part.

Last year, three weeks before the Battle end-of-season party, I was considering not riding again in 2014. A week later, my wife asked: “What’s up with you?” “Nothing”, I said.

After two weeks, I told her that I wanted to call it quits. Her answer: I don’t believe it. 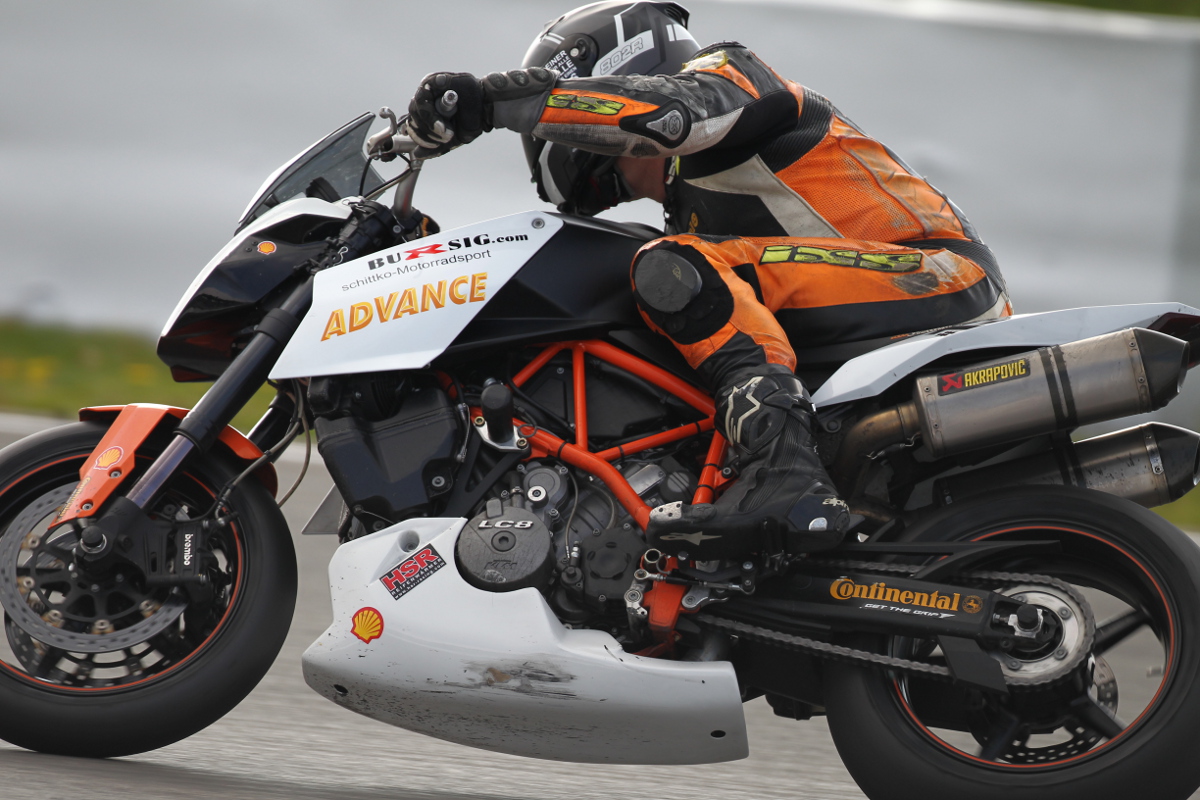 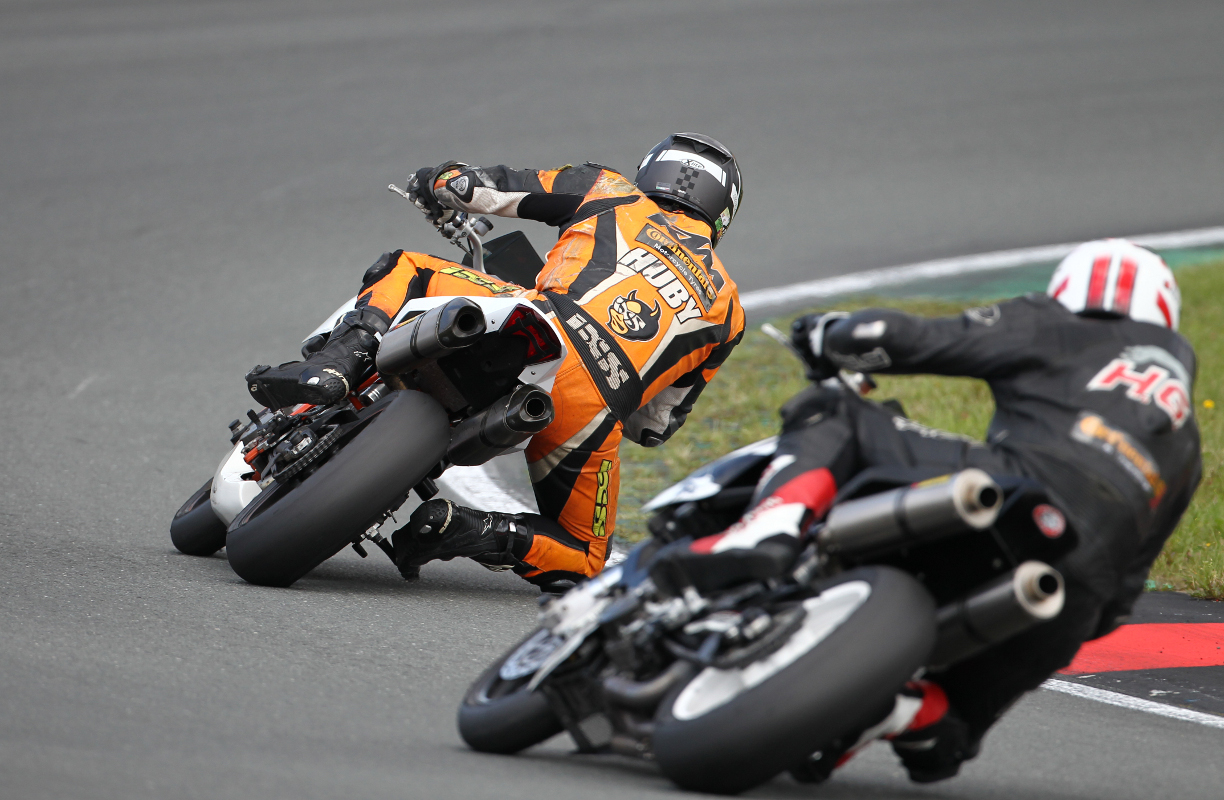 Then I told my fellow riders at the end-of-season party. Naturally, they all wanted to know why? Financial reasons, I replied. In the initial years, I still had sponsors, but recently I’ve had to cough up for almost everything alone.

Before I knew it, 1,320 euros had been collected. I was called to the stage, where a wad of notes was thrust into my hand: “Is that enough?” I now had more than half the entry fee and I didn’t need long to consider my answer. Then I cried like a baby for an hour and gave them all a big hug to express my thanks.” 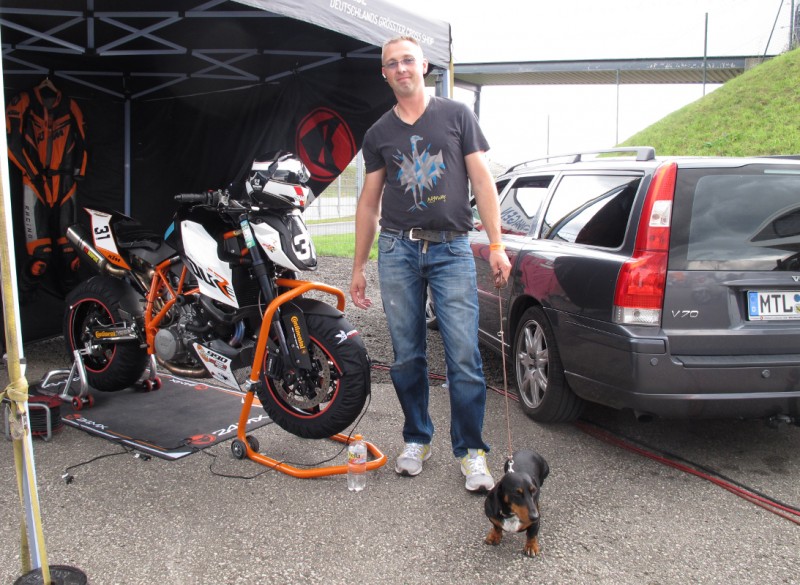 “My first race was in 2010 in Frohburg, but I dropped out in the meantime, because my girlfriend was against it. We’re no longer together, so I’ve started again.

I bought my SUPER DUKE, because it rides like a push bike and I was seeking something different after my CBR600. I had always wanted to take part in the Battle, purely for the fun of it. I’m still having a few problems with my lap times, but the season went well and I’m satisfied. Where do I usually end up? Right at the back. But I still have fun and that counts for a lot. 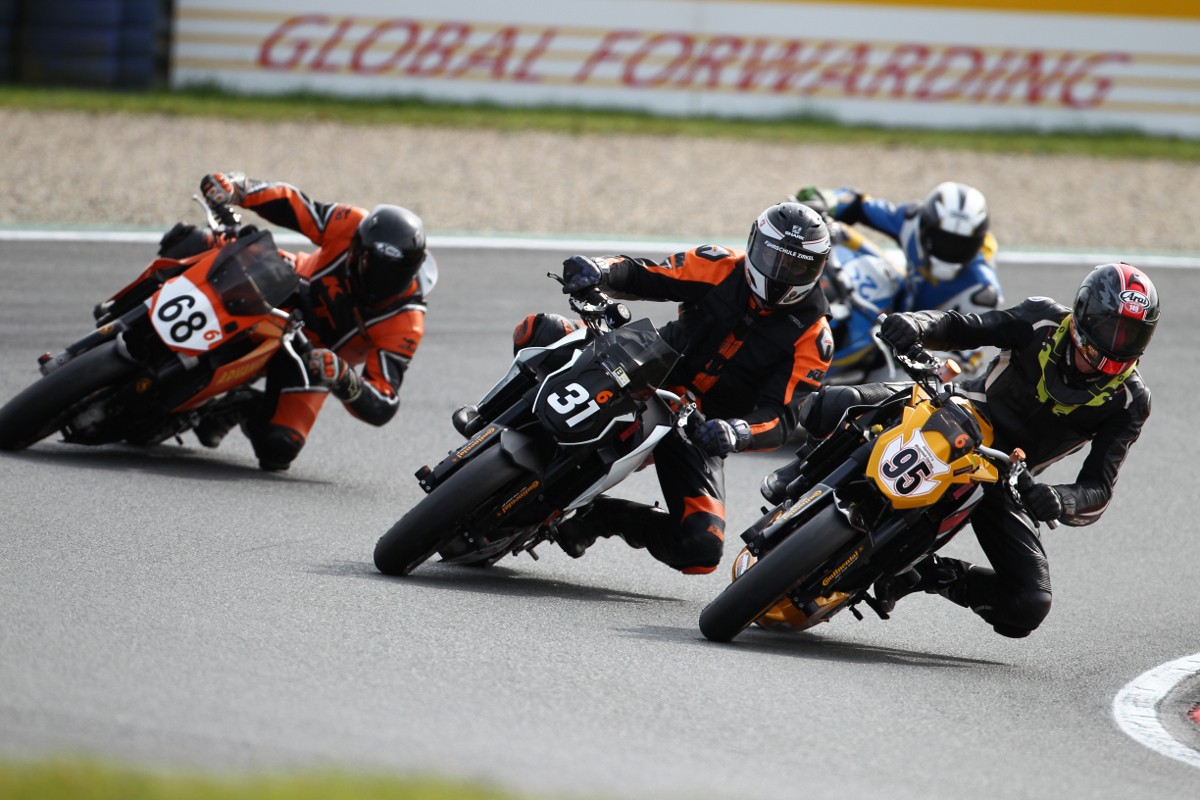 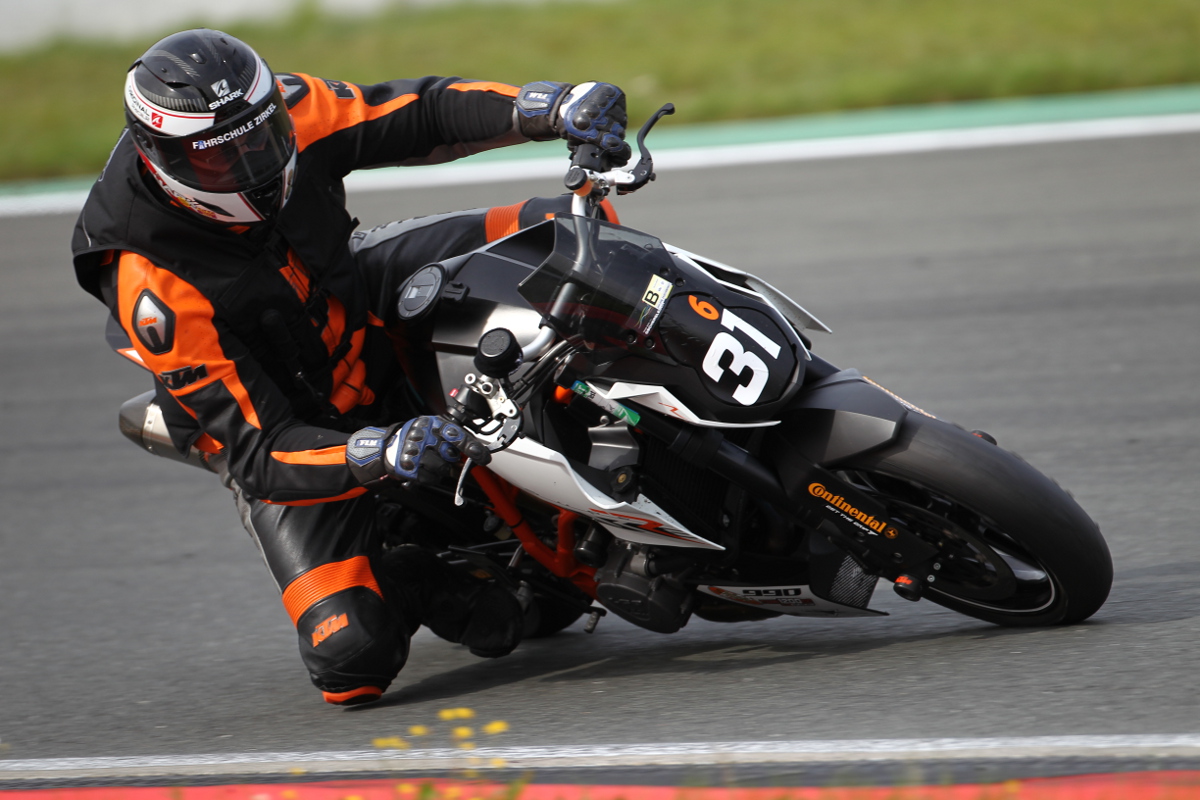 I travel to races alone. If I need any help, someone can always be found. After all, we’re a group that sticks together. Every now and then, I also take part in KTM Race Orange race training events. There are always enough people that I know there.

Ben, my dog, always has to come along too. The noise is no problem whatsoever. I tested his reaction during introductory training. He was completely OK. Does he need headphones? Nope. Dachshunds are bred for hunting and he’s bulletproof.” 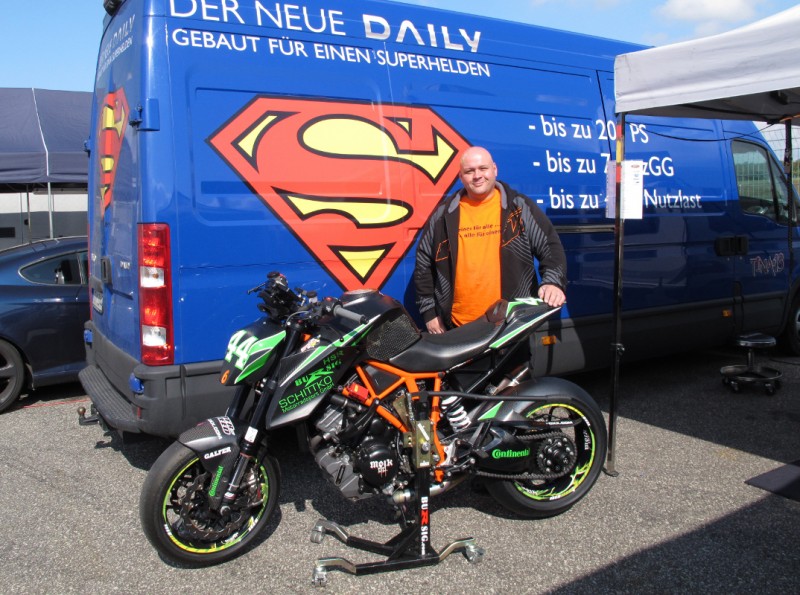 “In 2008, we were sat in the paddock in Hockenheim with friends and my best man Thomas Helldobler, who was riding in the R6 Cup at the time, was talking nonsense as ever. Thomas blurted out: “Next year I’m riding the SUPER DUKE Battle.” I’d never heard of this race series. Then a mate replied: “I’ll ride with you”, although he had never raced before. And a third mate said: “Me too.”

All empty words, I thought. Two weeks later, Markus, who always wore green underpants and had been riding Kawasakis all his life, called and said: “Hey, I’ve bought myself a 1290 SUPER DUKE R!” I was gobsmacked: “Have you gone bonkers?” His reply: “We all said we’re going to ride the Battle.” I said: “What? I don’t ride any races!” 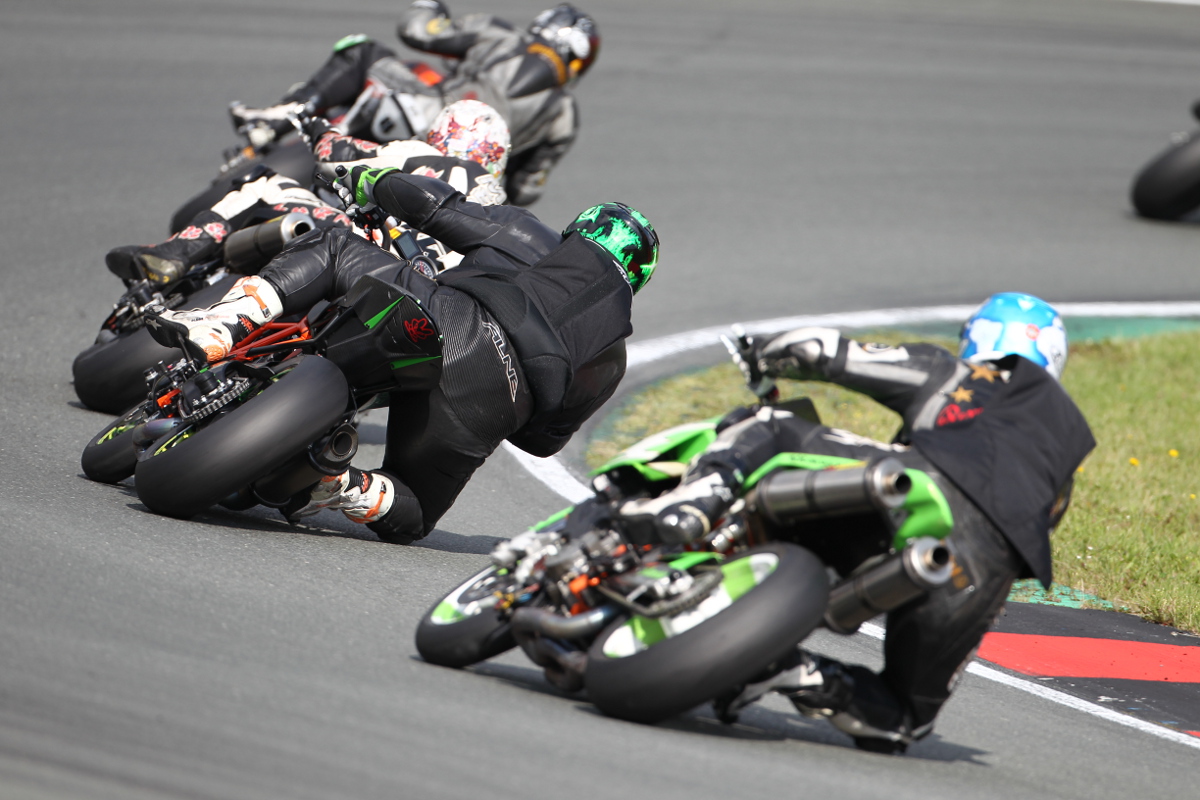 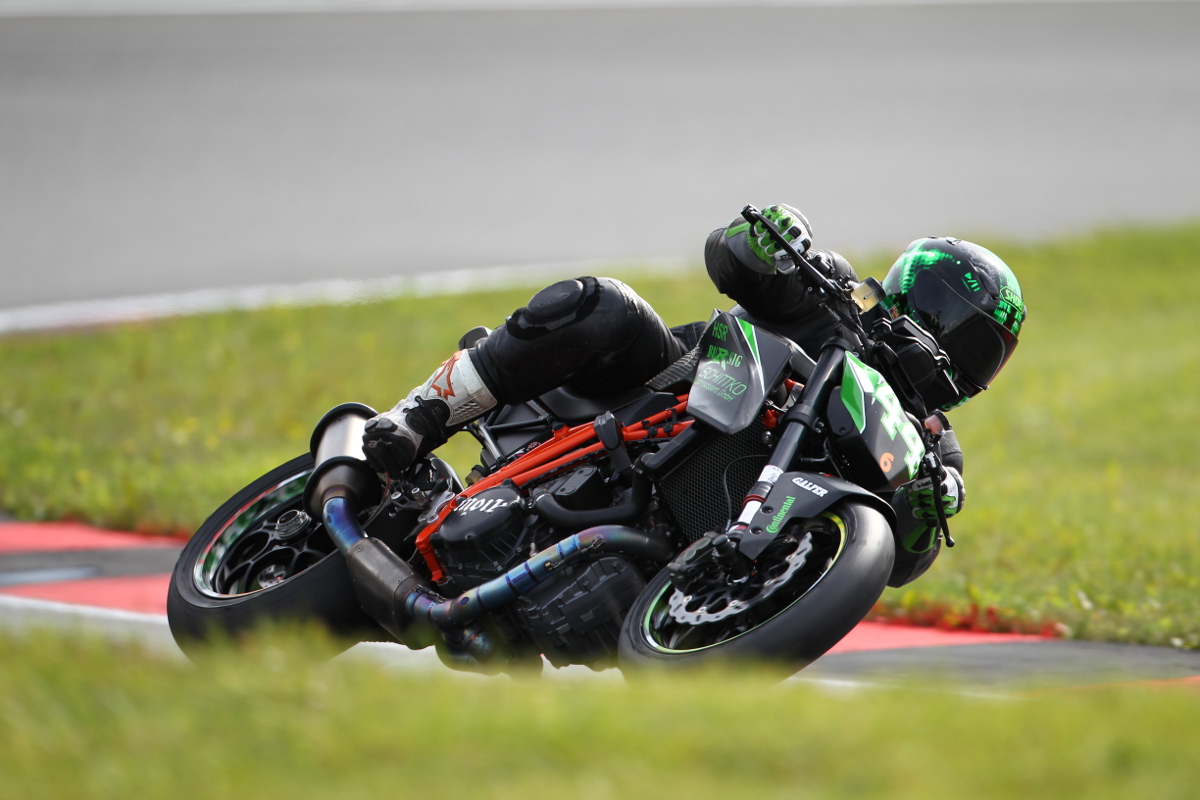 Oh well! Then we did it properly. We all bought the motorcycles. Completely clueless. I was lucky and was pointed in the direction of KTM dealer Konrad Schittko. Bought it, rode off, had fun, kept at it. The first year was a dream come true. I’ve been riding motorbikes for ages. All sorts of them, even sidecar racers, but the Battle is unique.

At one of the first Battle races, my fuel ran out on the cool-down lap. I wanted to wait for the recovery vehicle, but then I felt a kick on the bike from behind. A guest rider by the name of Sebastian Bursig, who I’d never met before, wanted to push me the remaining three kilometres. I said: “It’s OK; I’ll wait to be collected.” He looked at me in amazement and shouted with a slight Polish accent: “We arrive together; we leave together” and then he pushed me all the very long way to the paddock. Now I knew for sure that I was in the right place.

Ever since KTM Germany ceased its official involvement, the Battle has been organised privately. And because savings need to be made, we’ve all closed ranks. It’s actually become even more awesome. The family feeling is sensational and the Battle is the best race series that I know.” 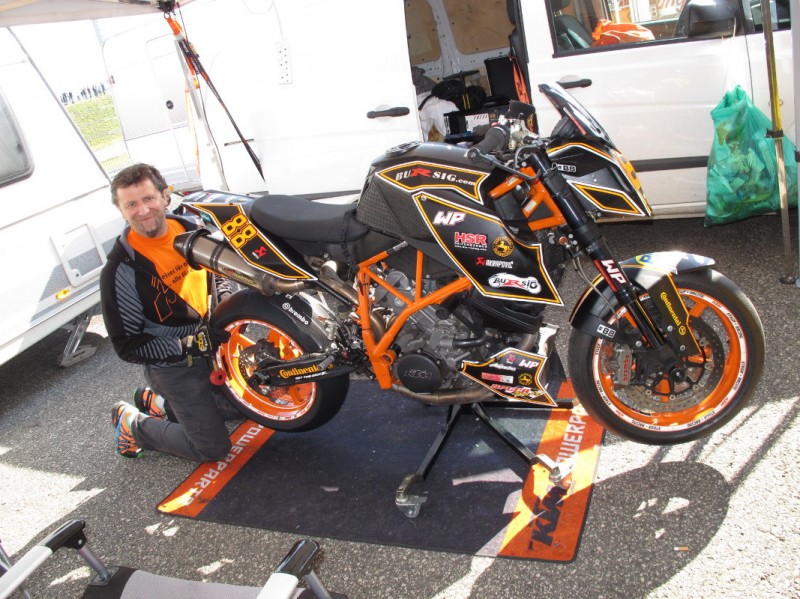 “A friend bought himself a SUPER DUKE and dragged me along to the final Battle race of the 2011 season in Hockenheim. When I saw how the troop arrived all together in the ‘Motodrom’ and celebrated a group burnout, I got goose bumps. I knew some of the people already and that provoked me to take part in this championship in 2012.

So this is my third year now. I did some road riding beforehand, but I mostly rode on racing circuits; six or seven race training events a year. But no race series. My weapons of choice were a Ducati 996 and then a KTM RC8 R. Now I only ride on the racetrack. It’s more fun and for me much more relaxed. 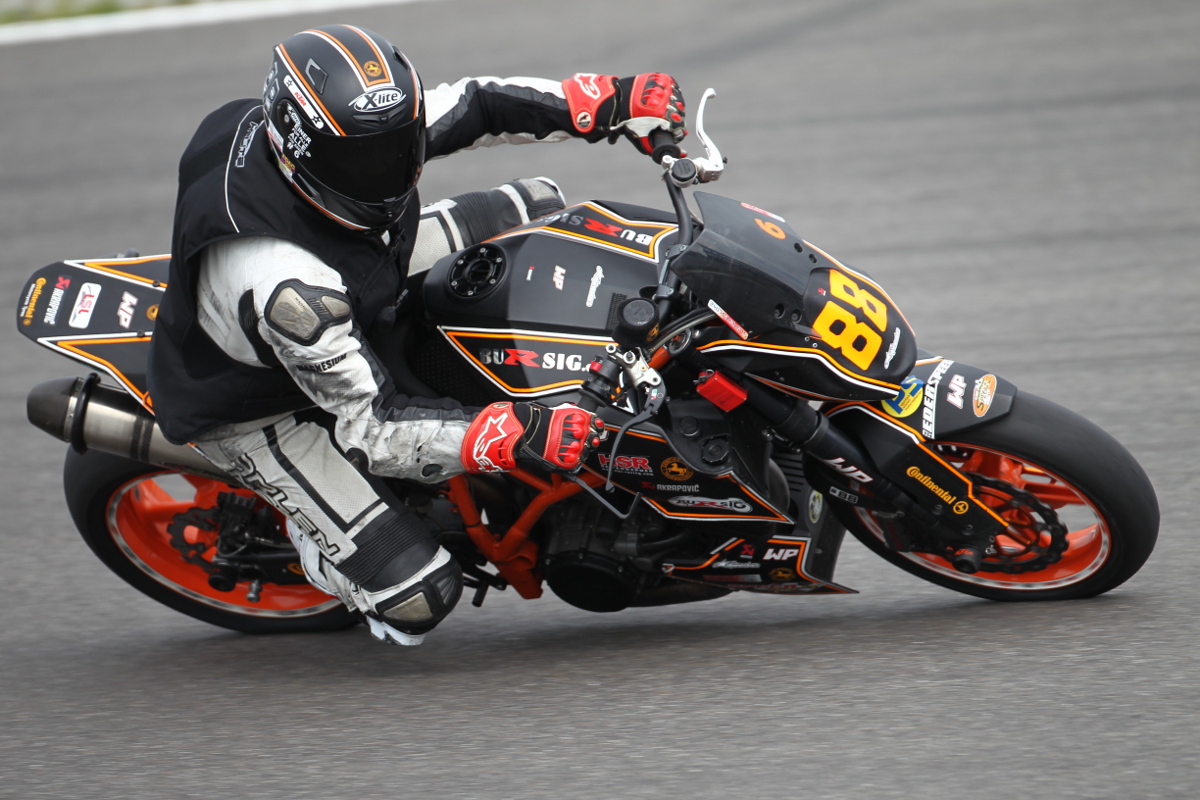 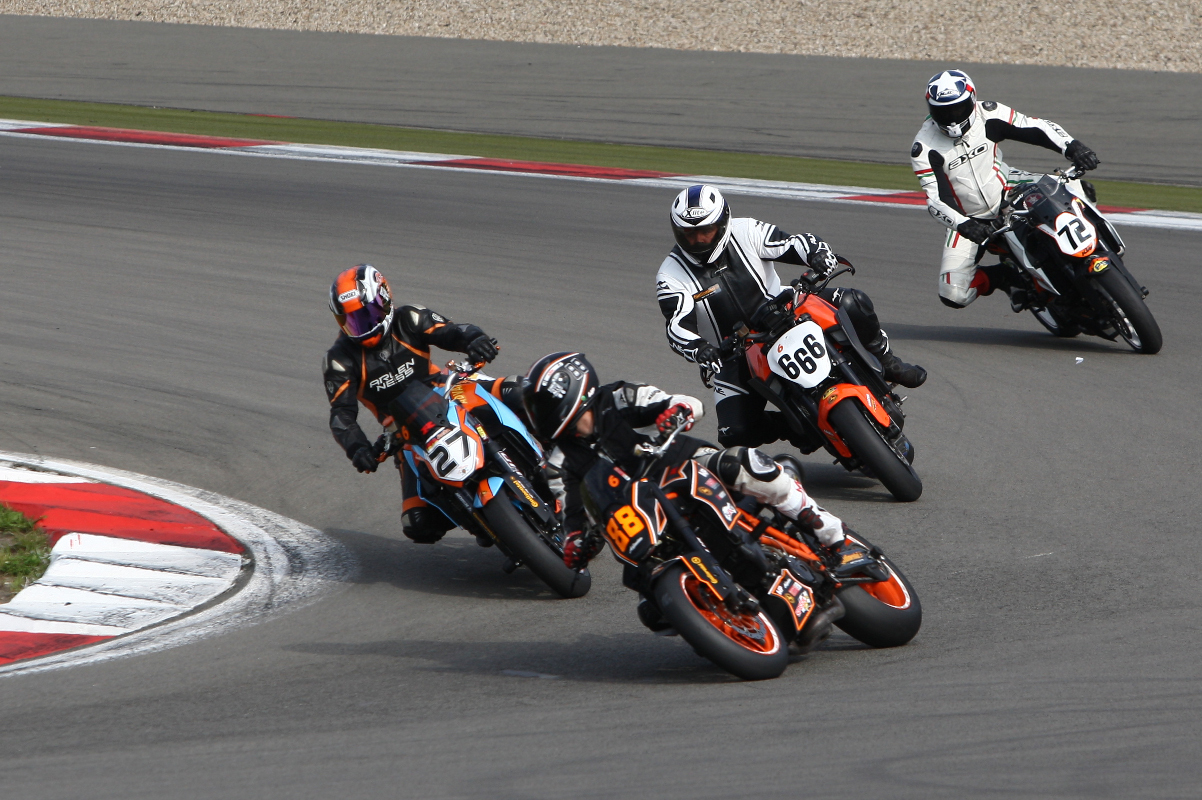 The Battle is awesome fun with a wonderful family. All those that I’ve met are people who tick in exactly the same way as me. Everyone stands up for each other; the team spirit is unique. At race training events, you’re either on your own or know two or three people; here, everyone helps everyone else in the event of problems.

How important is the result for me? Of course, there’s a bit of ambition involved. But fun is the most important factor. Points are a side effect; not a priority. You want to wind up as close to the front as possible, but not at any price.” 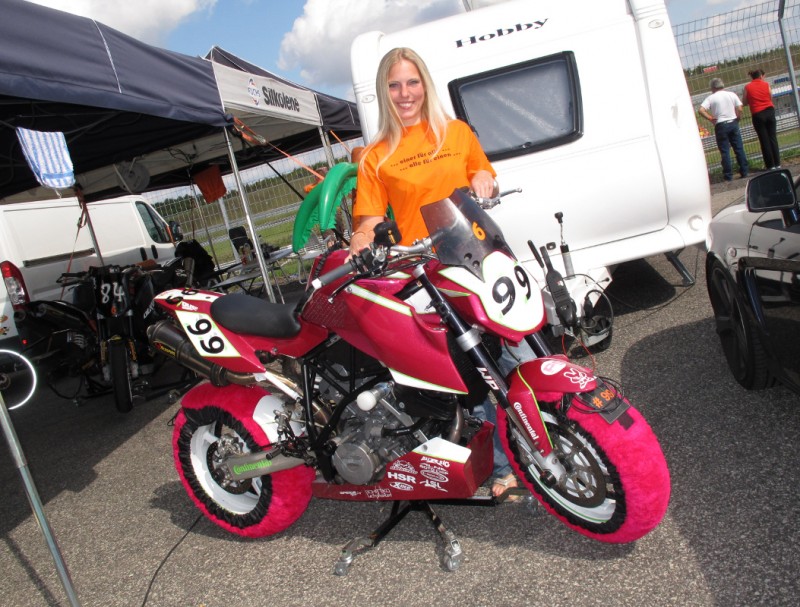 “I started in 2013, but was soon out of action after an accident. This is therefore my first real year. As long as the Battle carries on, so will I. No question. I ride relatively far back, but I’ve improved since the introductory training. The result is not a top priority. I’ve ridden at race training events before, but you learn things quite differently here.

I want to take part and have fun. In the Battle, you’ve no need to worry that someone will overtake at all riskily. The fast riders know what they’re doing anyway. You ride along with the others where you can enjoy yourself. 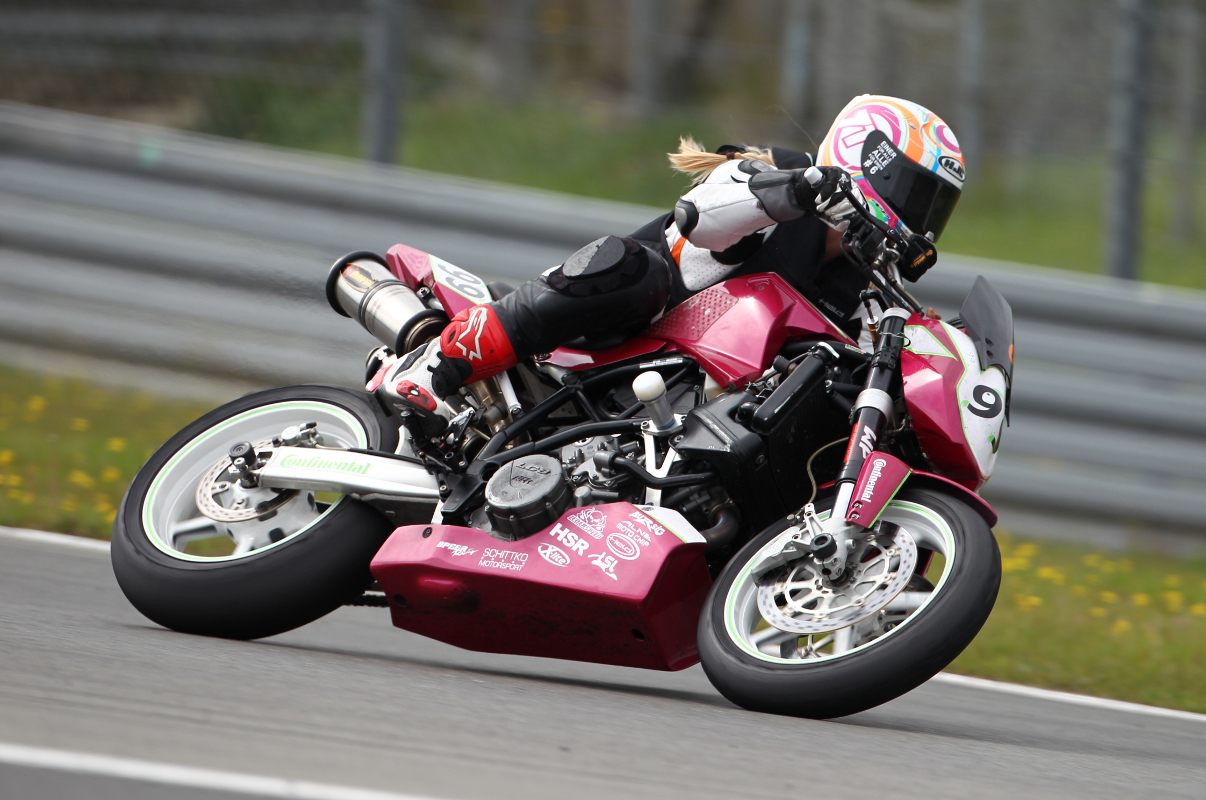 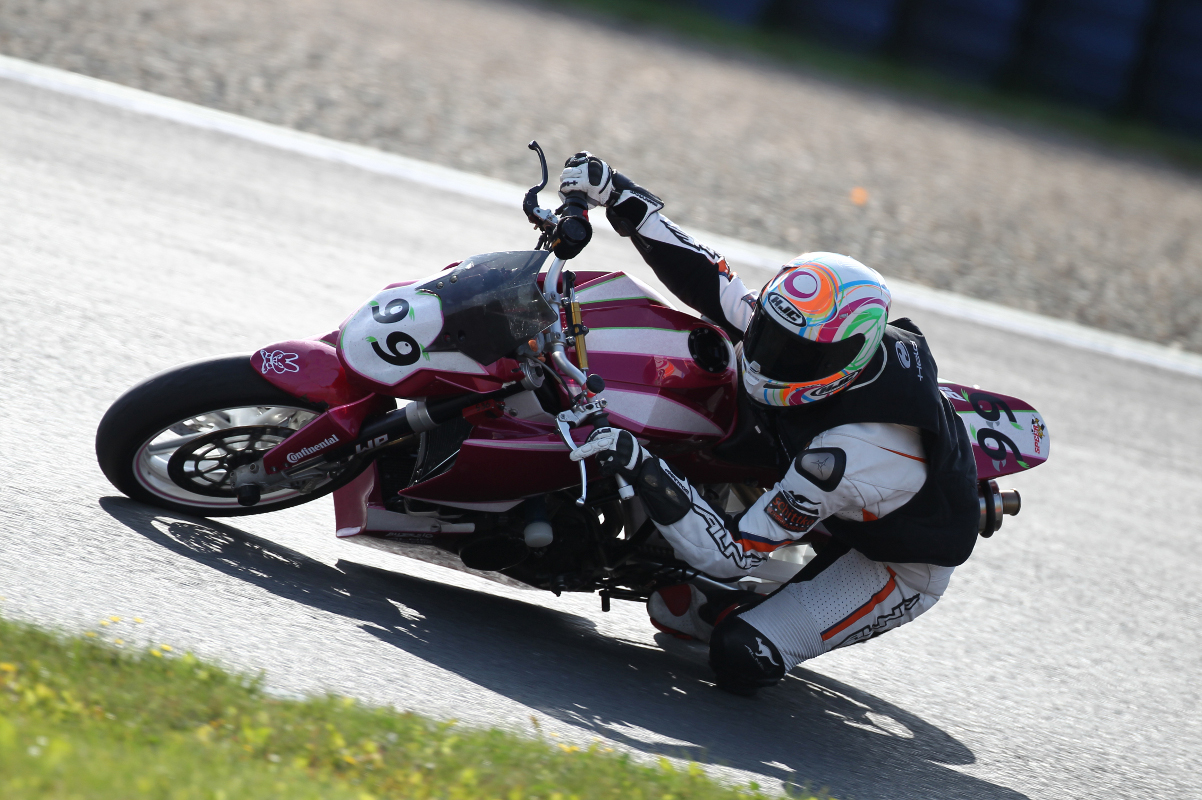 If you don’t know the track or have any problems, someone will come along and say follow me. To effectively bugger up your own training session, so that it goes better for others – I don’t think you’d find that anywhere else. It’s not like track days. The support is better, you learn more. The togetherness is tremendous.

My boyfriend Dirk also takes part in the Battle. He had the idea of the furry tyre warmer over a beer one evening and then implemented it together with Peter Ubl from HSR. “I ride in the Battle first and foremost because of the people; they’re all great. Riding is terrific fun, even when you’re travelling along like me, at a snail’s pace. Plus, there are all the trappings: the lies, being lied to, the shop talk – the atmosphere is fantastic.

Previously, I took part in long-distance touring car races at the Nürburgring. When my brother said: “Give up car racing, it’s far too expensive. Ride motorbikes instead”, I said: “Never! I want to carry on living for a while.” Then I sat at some point on a borrowed R6. Six laps later, I bought it after it landed in the gravel trap. Nevertheless, I was hooked and thought – yes, I’ll carry on with this. 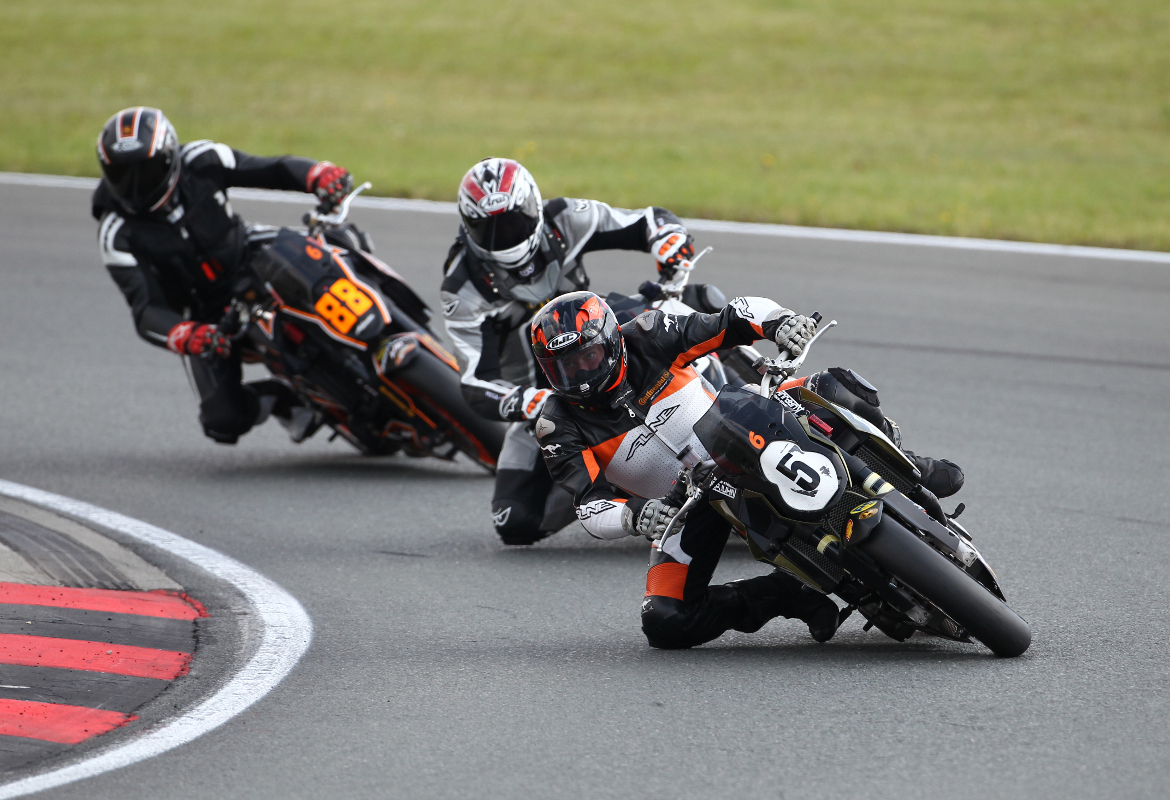 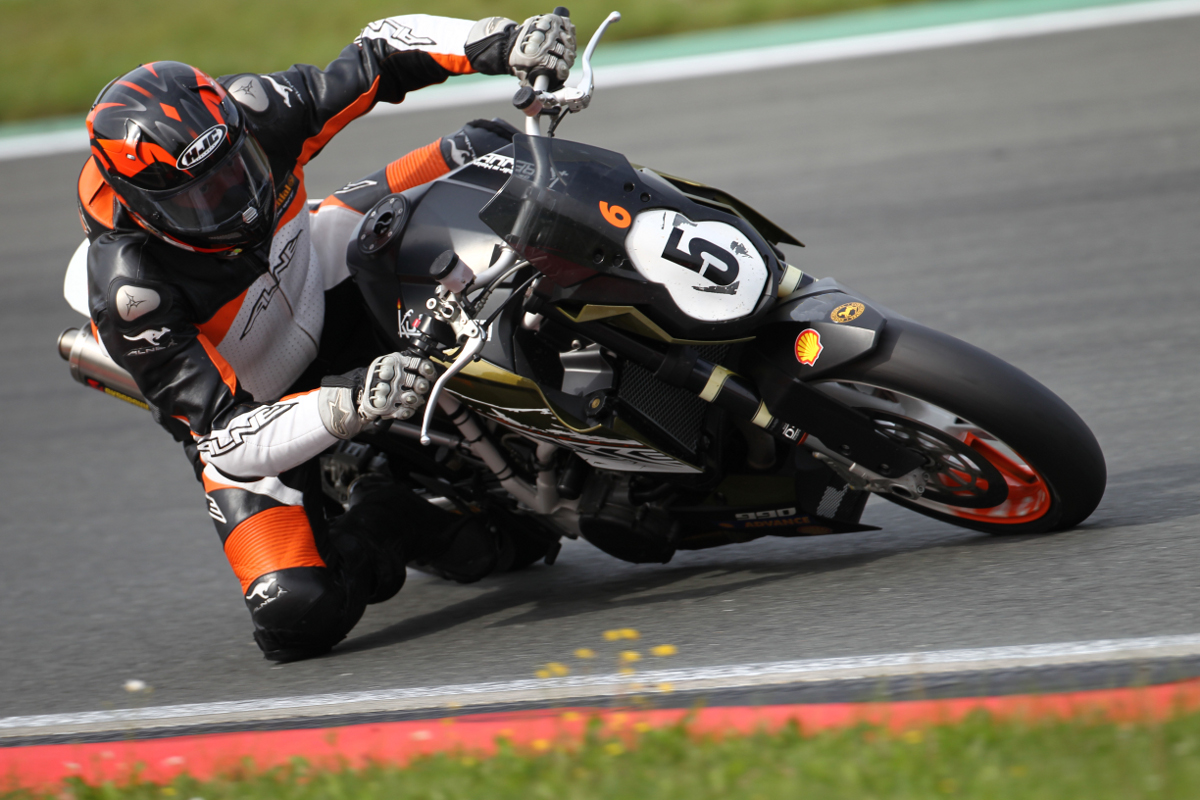 In 2010, I heard about the Battle, purchased my KTM 990 from Konrad Schittko and entered the fray. At the third race in Oschersleben in July, I went down in the fast triple left-hander. The crater I left in the gravel trap was later christened “Olli’s Ocean” when rainwater collected in there.

The shoulder injury put me out of action for almost two years. So 2014 is actually my first full season. Other race series never cross my mind now. SUPER DUKE Battle is brilliant. We fight out on the track, but things never get really hostile. Otherwise, we all stick together and everyone helps everyone else.” 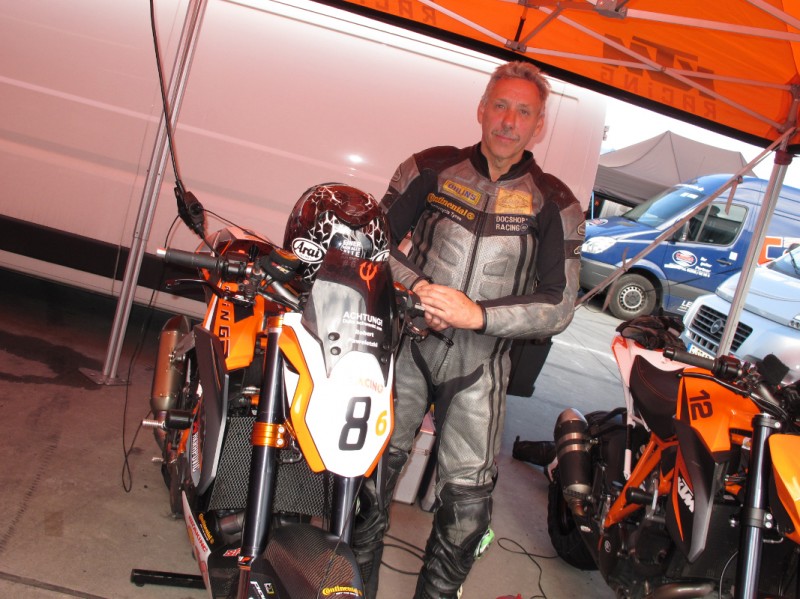 “Riding the Duke Battle is fun. I’ve been riding at racetracks for many years now and even took part in reliability rides in my early days. We are always fair with each other. There are more spats in other series. After all, everyone has to go to work on the Monday after. 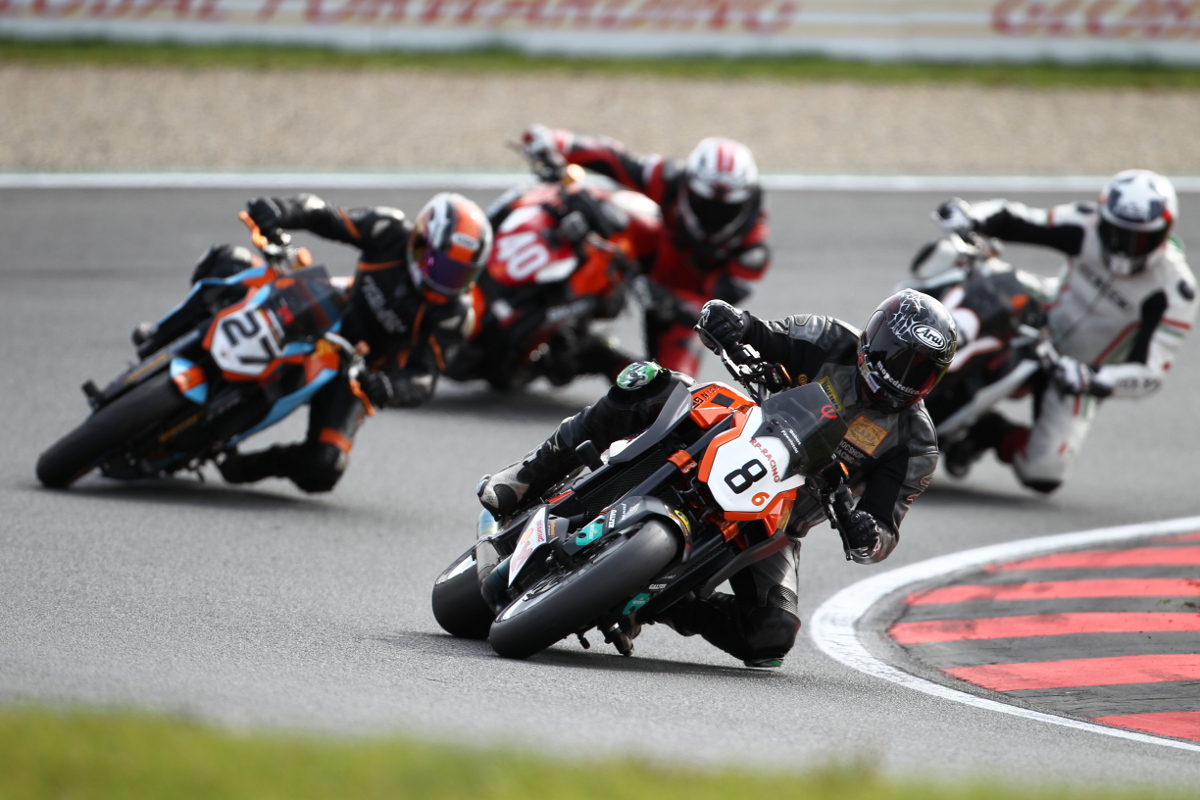 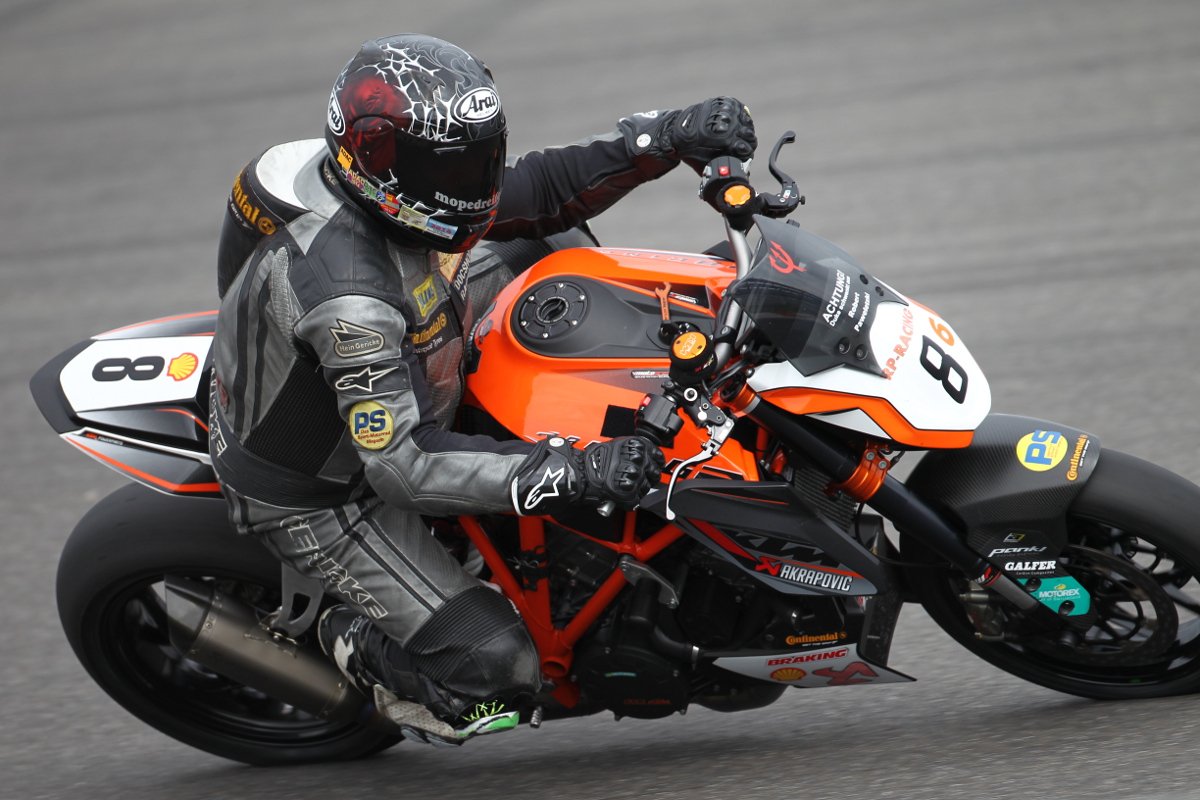 I’ve been involved since 2009. Several 990 SUPER DUKEs have passed through my hands: the standard version, then the R. And now the 1290. Am I satisfied? Yes.

When it comes to placings, I’m somewhere midfield, between 15th and 20th place. But that’s not so important. I want to ride, have fun and improve myself – you’re always learning something new. When you’re hanging on behind someone, you can be a second or two faster. But then are days when nothing goes well – something breaks or you’re fiddling around.” 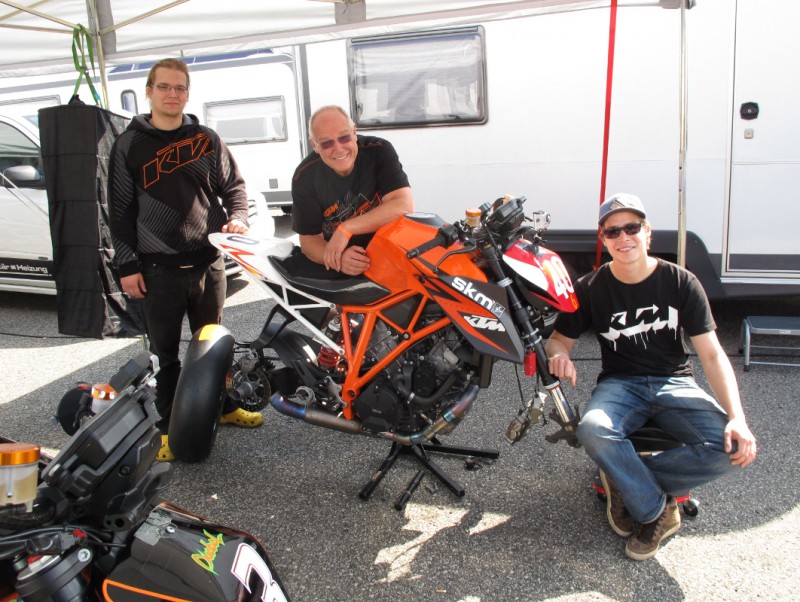 “I’m the youngest in the KTM Battle, apart from the guest riders. Why do I ride here? Because the family feeling is so good. Especially this year, with my dad Rudi and brother Thomas also taking part, we can make every trip to the racing circuit a real family outing.

I’ve been involved for a while now. Initially, I rode supermoto in the Husaberg Cup. Then I started with the SUPER DUKE Battle in 2011 and won the series in 2012. I was injured in 2013 and had to take a break. At first, I wanted to switch to the R6 Cup, but now I’m here again. 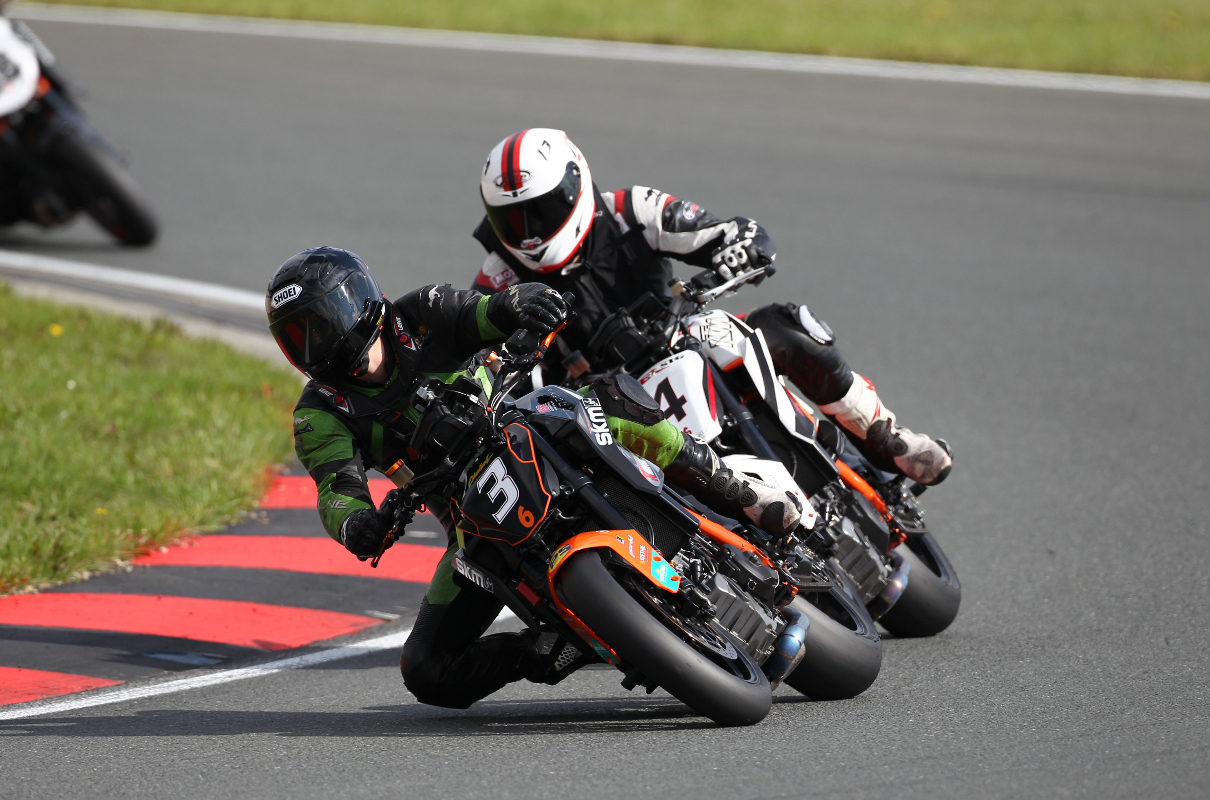 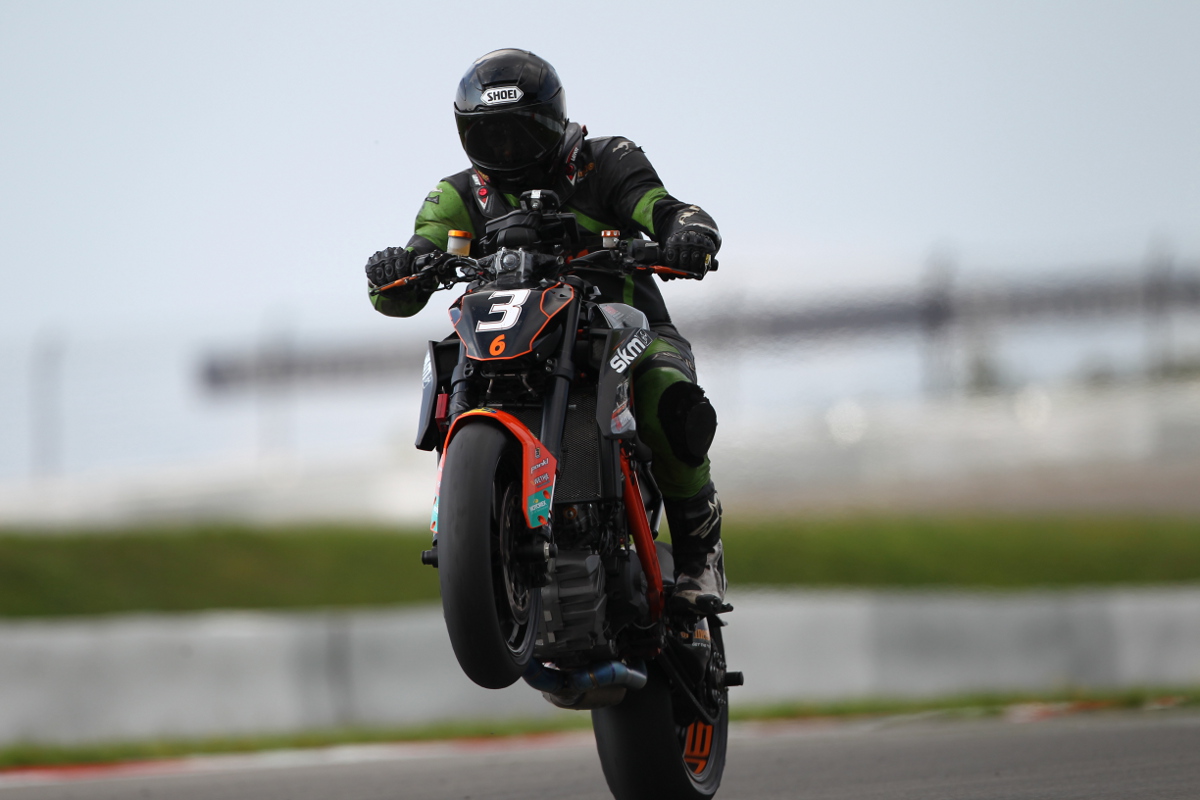 Do I ride motorcycles on the road as well? Sometimes, yes. But it’s not good. As a racer, you’re tempted to ride faster when you see curves, which is mostly beyond good and evil.

Make progress and dream of a professional career – I think I’ve missed the boat. Earning money with racing is difficult.  It would be great to reach the point where you’re provided with a bike and don’t have to pay for it yourself.”