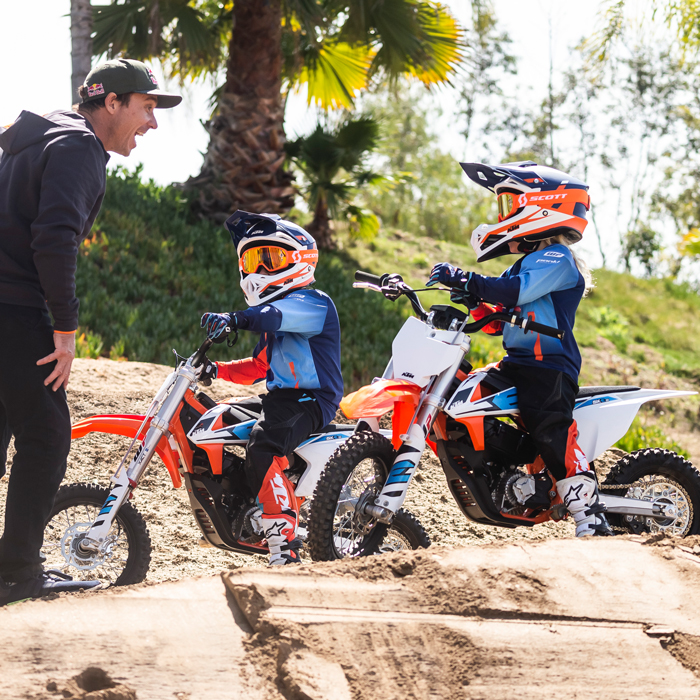 KTM SX-E 5S AT THE MADDHOUSE: THE MADDISON BOYS ENJOY THE ELECTRIC EXPERIENCE!

Robbie Maddison is a freestyle motocross legend and a world record holder. He’s also a household name thanks to his many daredevil stunts such as riding the waves of Tahiti in his ‘Pipe Dream’ video, back-flipping over Tower Bridge in London, jumping his motorcycle off a ski jump, and jumping off the Arc de Triomphe in front of Paris Las Vegas. While Maddison himself has some incredible and gravity defying motorcycle skills two of his sons – Kruz and Jagger – are developing their moto talent and recently took delivery of two KTM SX-E 5 electric motorcycles.

Kruz (9) and Jagger (6) soon got to grips with the electric bikes – Jagger’s machine had the optional lowering kit fitted for his smaller size, and the duo geared up to take on the experience at the famous ‘Maddhouse’ track at Maddison’s home. Robbie explained that the boys just loved the bikes and he’s seen such an interesting development in their ability while in a safe, controlled environment over the last few months thanks to the KTM SX-E 5’s adaptability for each rider’s skill level as they improve.

“Since the boys got on the KTM SX-E 5 it’s been an amazing experience. I’m really just checking air pressures and making sure the battery is charged and that’s it. As a father or race dad it’s really simple and user-friendly. We are just having a fantastic time. Their level of riding has gone up and we’re able to change the settings on the bike to follow that; Kruz is getting faster with the top setting on the bike, and Jagger is now on setting five. They absolutely love them!” said Robbie.

“My kids were just stoked to be riding these bikes. For those of us who grew up being into 2-strokes and combustion bikes we might look at an electric bike and feel like something is missing, but for the kids of the modern day they look at them and think ‘oh this is more in line with what we like’ – if it’s newer, modern and different then I think the kids are really accepting of it. They were just super stoked right away; they knew that they were onto something different and they knew that the bikes were special. When the bikes were first turned on and there’s no running or operating noises, and at the touch of the button there was just a little zing, their little eyes lit up like bonfires,” continued the FMX legend.

Robbie explained that the six riding modes are ideal for the developing rider and as a parent how important this is to help keep their child safe. He did let Jagger ride the bike on a higher setting than he was ready for – Jagger had been asking his dad for the same setting as Kruz, probably because he’s got Maddison’s fearless motorcycle madness in the blood, but Robbie quickly realized he was a little out of his depth. Maddison loved the fact that he could alter the performance and power of the bike with a quick touch of a button to get Jagger back in his comfort zone. The bikes’ arrival was also noted nearby the Maddisons’ residence, as the low-noise offers a real benefit for riding places in more urban areas.

“When he (Jagger) wasn’t comfortable we could just change it easily and he’s not made a mistake since. Then the ability for them to become absolute race bikes at just the touch of a button is great. For Jagger, with him being a bit younger he’s on the same bike as his brother, but a few settings behind. It’s just good as a parent to know my son is out there riding within his comfort zone when operating the bike and he is much more likely to be in control. With a regular bike not having that controllability or option to program it, for someone who’s not an experienced rider there is always the potential for more problems there.”

“Where we live noise is quite accepted, but the sound of a dirtbike can be a nuisance to non-riders. With the electric bike when it’s out zinging around, even my neighbors have said ‘oh yea I heard like a little bit, it’s hard to hear the electric bike’. If motorcycles go this way perhaps they will be accepted more in an urban setting one day,” continued Maddison.

The KTM SX-E 5 is a READY TO RACE machine with the main advantage that it’s perfect for the absolute beginner right up to the fast racer. The bike grows with the rider and is aimed at juniors aged three to 10 years old thanks to its fully adjustable ride height with six riding modes. Robbie explained it’s definitely a go-to machine for a parent that wants to ensure their child is learning gradually and safely, whilst still having the ability to provide race bike performance with a sharp power delivery as the child develops. Maddison also enjoys the free time he’s gained with the minimal maintenance required – it’s basically a wash, charge and go operation!

“To someone who’s just stepping into the market having the ability to tone it down, make the power softer, limiting the output, it’s just such a great safety feature for a little child that could easily get out of control. You’re eliminating the possibility of whiskey throttle which is so comforting. As a parent the number one worry is that if you put your child on a motorcycle are they going to get out of control. When you put it on setting one, you can jog alongside them and also it’s great that the maintenance needed is minimal. It’s changed the game, it’s made introducing motorcycling safer, and a step by step, super safe learning curve for the young racer – while the bike can still be made to be as powerful or if not more so than a KTM 50 SX.”

“With Kruz he already had three motorcycles getting to the age of nine years old, which is a significant investment. For Jagger he could literally be on one for that time with the adjustable seat height and so on with the KTM SX-E 5. It’s really a cool thing, we have the lowering kit and there’s three or four stages of growth before he gets to full height, which could be a few years down the track. The fact I’m not washing air filters or worrying about gasoline is like a miracle in motorcycling (laughs) it’s a breath of fresh air to me. Coming in I wash the bikes, put them on charge and literally we’re good to go. I check the air pressures once a week or so, which don’t change too much, there’s no air filter checks, no pre-mixing, no issues with dirty fuel, blocked jets, bikes not starting, fouling plugs, it’s all eliminated.”

“I’ve had a few friends down and the reaction has been basically ‘great, now I need to buy one of these’ (laughs). They are super interested, they have asked about my experience – they are all blown away by it. It’s quiet, it’s fast, it’s competitive with the same size combustion engine – their minds start running about the possibilities. It really changes the possibilities for riding. It’s exciting for the motorcycle industry and takes away that noise element that is unfortunately an issue for dirtbiking.”

Maddison explains that the bike is charged up in around 20-minutes between each ride, which is about the time of a drink and a snack for the boys. He explains they’ve never had to worry about the batteries being charged, and that the bike will do more than a moto-worth of riding. It certainly has the stamp of approval from Kruz and Jagger who think ‘it’s awesome’ and we look forward to seeing how their riding progresses over the next few months.

“The electric bike doesn’t have any limitations compared with the combustion bike, only additional positives. It jumps just as far, it turns quickly, it’s completely comparable and possibly even better than a combustion engine. The boys have the confidence to ride it just like a combustion bike, and that’s impressive to see. The battery life is of course what some will see as a question mark, but this has not been an issue for us. It’s literally changed the hours we ride, how we ride and the vibe through the house – it’s four o clock in the afternoon and they are like ‘dad can I ride?’ – normally I’d say no as it’s that time when people are coming home from work, but they can now with the KTM SX-E 5 and we absolutely love them,” concluded Robbie.

263 Responses to KTM SX-E 5S AT THE MADDHOUSE: THE MADDISON BOYS ENJOY THE ELECTRIC EXPERIENCE!