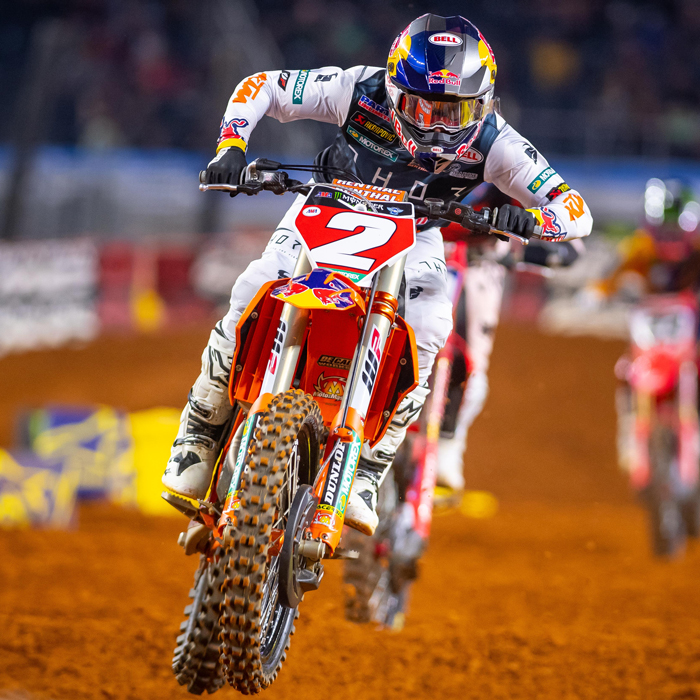 LEADING THE LEADERS AND DEALING WITH 2021 SUPERCROSS

Only days and hours remain in the 2021 AMA Supercross season and Red Bull KTM Factory Racing have been chasing their second 450SX title in the last three years. We called Team Manager Ian Harrison to ask about Supercross in a pandemic, the evolution of Cooper Webb, and more…

The FaceTime audio call is a little noisy. There is activity going on behind Ian Harrison at the KTM workshop in Murrieta, California as the team get ready for the final weeks and flurry of Main Events that will close a 2021 season of limited venues and a truncated schedule featuring midweek races. Ian has kindly given up some of his time to chat about the campaign as Cooper Webb – the most successful rider in the 450SX field so far in ’21 and holding the red plate at the time of writing – gets nearer to the big prize with Ken Roczen and Eli Tomac still in looming proximity.

Harrison has been holding the reigns of Red Bull KTM under the gaze of Roger De Coster since 2019 and has helped steer Webb to a championship and second position in that time. He’s getting close to another AMA/FIM distinction for the factory in what have been unprecedented times both for the sport and the team. But there are other matters on the horizon to keep him busy…

Ian, 2021 is almost over and it’s been close, hectic, different: have you felt that intensity?

It’s actually been pretty good. Having multiple races at one venue and not being able to get out and practice during the week has been an equalizer for everyone really. When we were in Indianapolis it was so cold – in fact -5 or -6 degrees each day – we were all stuck in the same boat. It was at that time when I saw Coop starting to come around and that’s when I think having great off-season preparation – and being able to maintain it – meant he could build momentum. When we went down to the warmer states and places like Orlando, Daytona and Dallas he just seemed to catch fire. He was a step ahead of everyone else. I think the precursor of having the last six rounds of 2020 in one stadium and in one hit gave us a good insight of what to expect this season.

Was running the team a challenge in the continuing pandemic?

Yeah, but I think in the US it is a little different compared to Europe for restrictions and stuff. The toughest thing is being in the pits and being isolated the whole time. Also, the travel is a bit more complicated. You get a bit nervous when it comes to the Covid tests. We do it twice a week and if someone is positive then you need a plan in place to effectively deal with that. You want to protect your riders but there is only so much you can do. You can only hope that people are doing their best away from the track to stay safe or away from potential hazards.

Are you a fan of the midweek races? Do you think it might become a regular occurrence for supercross in the future?

Last year I thought it might…but after this year and being stuck in one place for twelve days I’m not too sure. I think by the final Saturday of a triple it is quite tough on people. Being in the same environment, in the same trailers, in the same tents: it gets a little repetitive. I think if it was a Saturday-Tuesday schedule with the following Saturday free then I that might work. But having three in a week looked to be tough on the paddock.

How difficult – or weird – has it been completing a season in those stadiums with barely any public or atmosphere to the races?

Absolutely. A big part of it is missing. Although, to be perfectly honest with you from our side, once the racing begins you get so hooked into it that you don’t notice, but during the opening ceremonies and practice sessions it just seems so ‘light’ with so few people in there. It is a little awkward and seems ‘off’. I prefer Supercross with a big crowd and you can hear the cheers and people getting behind the riders.

Cooper has been right in the mix for the title with Ken Roczen and Eli Tomac. It’s your third season working with him. Have you seen many changes in his approach?

In 2020 he started quite slowly because he was ill and there was the possibility that he even had Coronavirus at that time. Then he had that horrible crash that knocked the wind out of us for a little bit. So, in the end, finishing 2nd was not a terrible season overall but this year I have definitely seen a guy that can really plan how a race will go. He’s really thinking about his positions and what the other riders are going to do, how he is going to attack on the track and where he is going to push and when to be patient. There is more maturity – from a racer’s point of view – and I think he is more confident because of that plan. He’s confident in his training and his bike and all those things together make for a strong rider. Ken Roczen and Eli Tomac are no slouches! You have to be on your A-game to beat them. Coop has been just a step ahead of them with less mistakes, better starts and a number of other factors that have put him up there. Having that plan has really injected him with confidence. I remember years ago when we were working in another team with Ricky Carmichael we had the same feeling. We have that sensation that we’re going to do well and fight for the podium whenever he’s out there. At the time of talking he has won five from the last seven races and finished second in the two others, which is amazing.

Is it satisfying to see that evolution in Cooper?

Yeah, and his strength is the fact that he’s an incredible racer. He gets stronger as the night goes on. When he’s in the battle and he really needs to dig deep he can stay so calm and be calculated; this is something in which a lot of other guys have a hard time to do. You cannot teach that or give it to somebody. They just have it.

There has already been talk of Aaron Plessinger being linked with the team and Marvin Musquin staying on for another season. All will be revealed soon no doubt but how do you feel about the possibility of running three riders in the premier class?

Having three would be tough for sure. I think it is great that the KTM Motorsport department want to keep Marvin for another year because he’s done an incredible job for over a decade now but the reality is that eventually the younger guys come in. So, we needed to look at that and have someone ready. Aaron is one of those in the mix and has a lot of potential. We’ve had number of seasons now where we’ve only been able to field one racer because the other one has been hurt. It would not be a bad thing to look at a third rider. We also have Max Vohland in there and perhaps having riders across different classes is a challenging part of the job.

6 Responses to LEADING THE LEADERS AND DEALING WITH 2021 SUPERCROSS