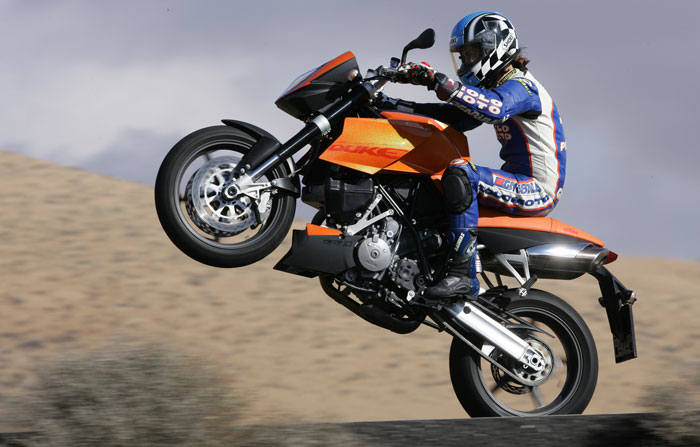 A quarter of a century ago, KTM took the public by surprise by launching the KTM 620 DUKE. At the time, the Austrian manufacturer was known for its off-road motorcycles, so no one was expecting the release of a radical street bike. Today, all KTM Naked Bikes bear the name DUKE, from the KTM 125 DUKE right through to the KTM 1290 SUPER DUKE R…

Back in 1992, before the original DUKE series was launched, some KTM technicians had been experimenting with a road bike, featuring two LC4 engines in a special housing, each with a capacity of 553 cc. But the machine with the tubular trellis frame was no more than a thought experiment, a vision. At the time, few thought it would become a reality as the company had only just relaunched following insolvency a few months prior. 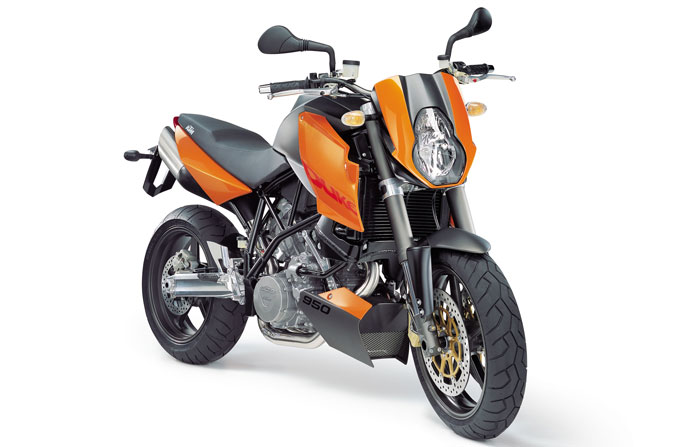 Then, at INTERMOT 2000 in Munich, KTM unveiled a brand-new two-cylinder project that was to be ready for series production three years later in the form of the KTM 950 ADVENTURE. Of course, similarly to the DUKE with the LC4 in its time, there were also thoughts of producing a road model featuring the ultra-modern LC8 V2 engine. In 2003, KTM’s 50th anniversary year, a prototype of a street bike with a two-cylinder motor was also released, known at the time as the KTM 950 DUKE, was launched alongside the KTM 950 ADVENTURE. Since those working on the project were able to use the components from the KTM 950 ADVENTURE for the 950 DUKE’s engine, the conditions for producing KTM’s first two-cylinder road bike were excellent. In fact, it not only made perfect sense for the KTM 950 DUKE to be shown as a prototype at exhibitions, but also to develop it for series production. 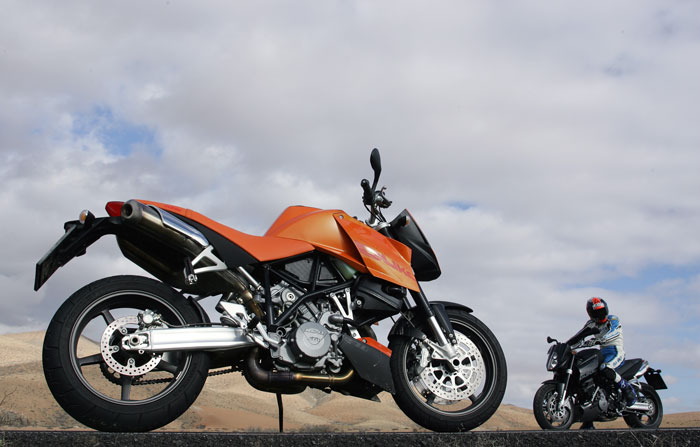 Then in 2004, once again at INTERMOT in Munich, the result, now called the KTM 990 SUPER DUKE, was on display for all to admire—a lighter and more maneuverable machine than anything that had come before it in the large-capacity Naked Bike segment. More than anything, the KTM 990 SUPER DUKE stood out from the competitors’ products thanks to its unique design and Kiska’s unmistakable angular lettering. The KTM 990 SUPER DUKE was powered by the V2 engine, which had been increased to a capacity of 999 cc and could achieve 120 hp. The SUPER DUKE R, a particularly sporty street fighter with 132 hp at its disposal, followed in 2007. The bike could easily be distinguished from the basic version at a glance thanks to the “R” that stood out against the orange painted frame. 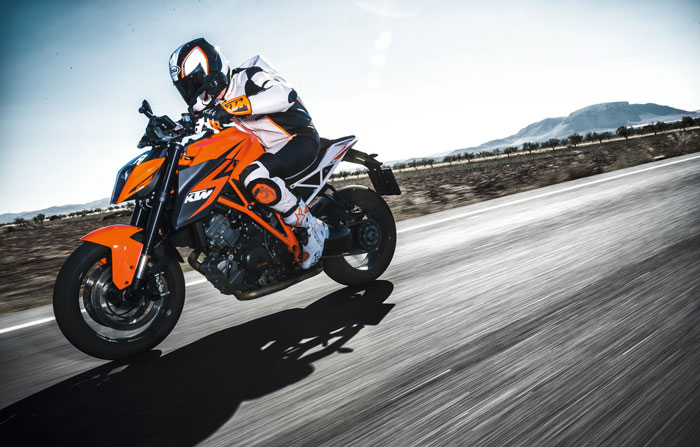 The KTM 990 SUPER DUKE’s successor, the KTM 1290 SUPER DUKE R, was available from 2014 and promised endless power. The constructors were able to draw on unlimited resources for the chassis. In the tubular trellis frame, a single-sided swing arm guided the rear wheel with wide 190 tires, while the lean-angle-sensitive traction control (MTC—motorcycle traction control) and the Bosch two-channel ABS were included as standard from the start. “THE BEAST”, the world’s most powerful naked bike, is still as raw, brutal and extreme as it’s always been. 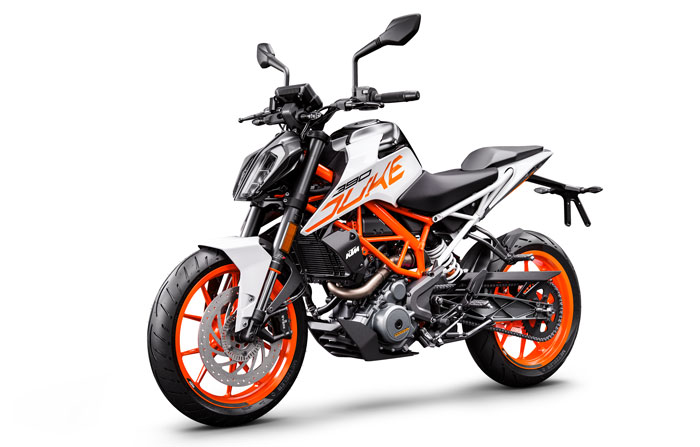 At the other end of the KTM portfolio are the entry-level bikes from 125 to 390 cc, which are built at Bajaj Auto Ltd. in India. Twelve years ago, KTM and Bajaj entered into an extensive partnership with the objective of developing powerful liquid-cooled four-stroke engines, which KTM wanted to use as a basis for street motorcycles in the then-unconquered Street entry-level segment. This served to round off the existing range below the KTM 690 DUKE. 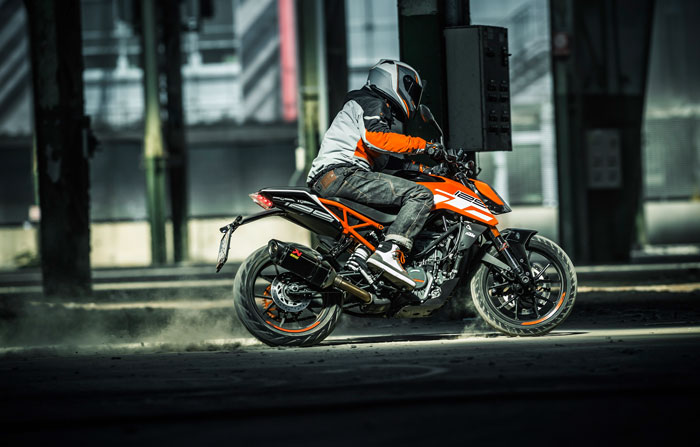 Even the KTM 125 DUKE has LED headlights in the unmistakable BEAST style, a color TFT display and a tubular trellis frame included as standard alongside high-tech Brembo brake technology with ABS; this is complemented by high-quality accessories in the KTM PowerParts range, such as an Akrapovič slip-on silencer, Wave brake discs, and various luggage systems. 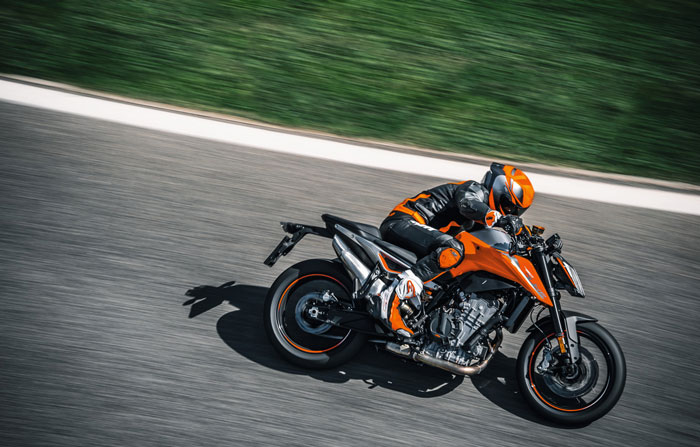 The latest member of the DUKE family is the KTM 790 DUKE, introduced in 2018, which really made waves when the prototype was unveiled at the EICMA motorcycle show in 2016. The KTM 790 DUKE is also known as “THE SCALPEL” owing to its precise handling. The high-tech two-cylinder series engine with 75° crankpin offset makes for a mesmerizing sound. Here, too, nothing is left to be desired, with cornering ABS, switchable traction control, slipper clutch, and quickshifter all included as standard. Twenty-five years after the DUKE—long since a cult bike—made its debut, KTM now has a DUKE in its range to suit all tastes. This starts from the entry-level 125 DUKE, which can be ridden by 16-year-olds, through to the “BEAST”, the super-powerful KTM 1290 SUPER DUKE R. There truly is something for everyone.