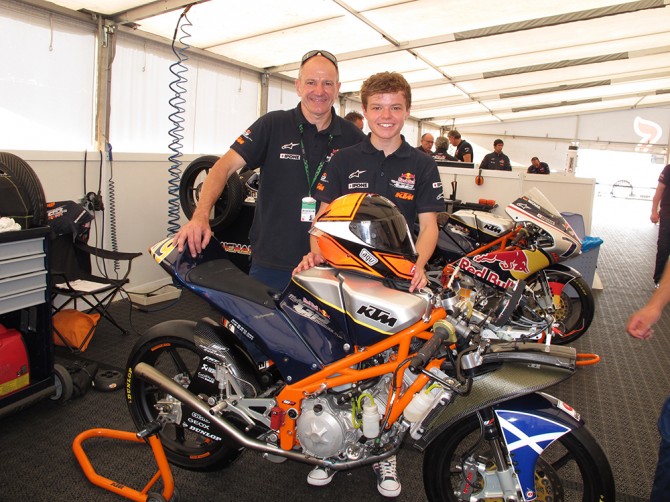 Tarran Mackenzie, the 17-year old son of former 500 Grand Prix rider Niall Mackenzie, is another of the faces to compete in the Red Bull Rookies Cup. We took time to ask father and offspring how things were going…

So Tarran, what’s the story?
This is my second year in the Red Bull Rookies Cup. I am 17 years old, live in East Midlands in the UK and go to college to learn ‘motorcycle engineering’.

Which series do you prefer?
I like the Red Bull Cup more; it’s more competitive and well organized. Back home I have already won a couple of races, here I just try to score points, it’s better for my riding.

How do you like the Moto3 KTM RC250R?
Last year I rode the two-stroke KTM cup bike; the four-stroke we have now is easier to ride. Very nice, I like it a lot.

Where do you want to end up?
In the motorcycle world championship, hopefully one day.

Your father Niall raced motorcycles himself…big help?
Definitely. Here he works on the bike while in Britain we have two mechanics. Back home he knows the tracks, so he can tell me even more about lines, how to brake and stuff. My elder brother Taylor races motorcycles also, he’s 20. He can also help me a lot.

One ex-GP- and two active motorcycle racers in the family – your mother must have strong nerves!
Yeah, it´s not easy for her, she is nervous all the time. So she prefers to stay home; only at Silverstone she will come have a look. She has done all this with my dad throughout his career, so she understands very well what the lifestyle is like and is always helpful in that way.

Niall, how are you and what are you up to when not helping out Tarran in the Red Bull Rookies Cup?
I get along well; racing was good to me. I have a house and a car. I work as trackday instructor, write articles for the website Visor Down, do co-commenting on Red Bull TV and generally be full time manager of two racing sons. So it never gets boring! 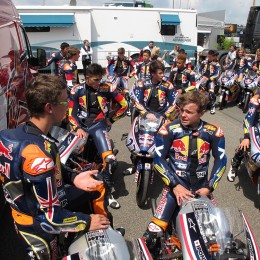 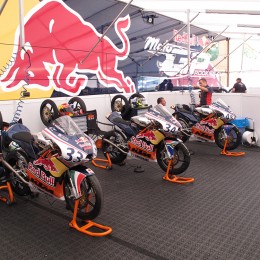 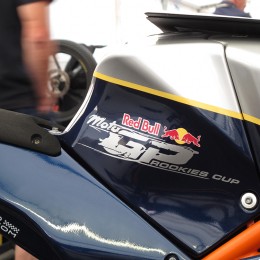