What’s the difference between Ken Roczen’s 450 SX-F and the one you see in the dealers? Not that much! However, here are five key areas that the German star focuses on for AMA competition. 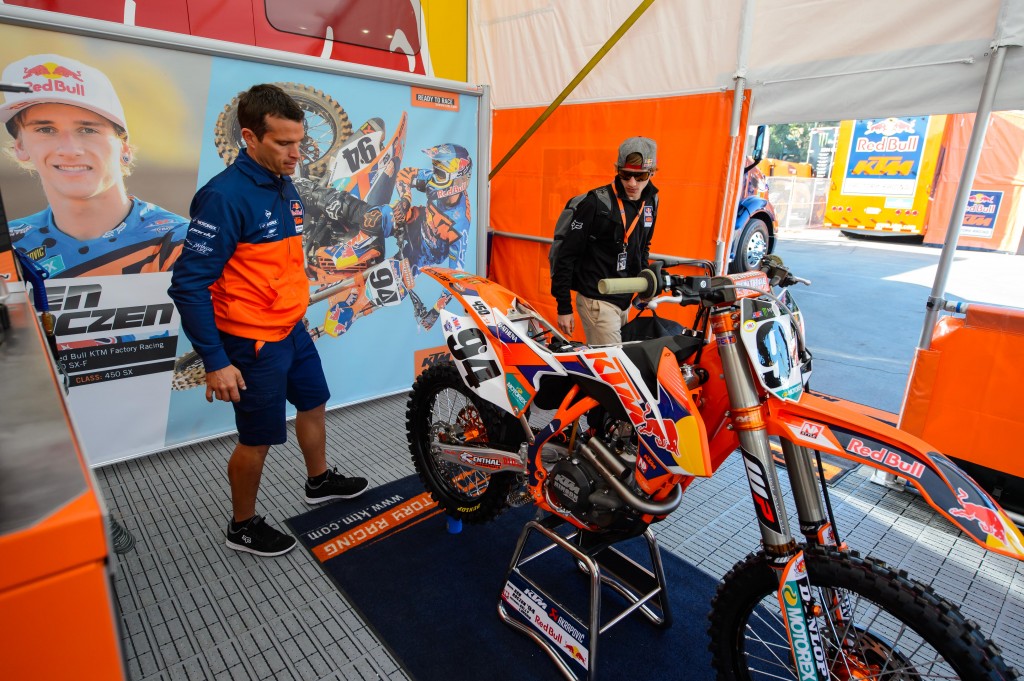 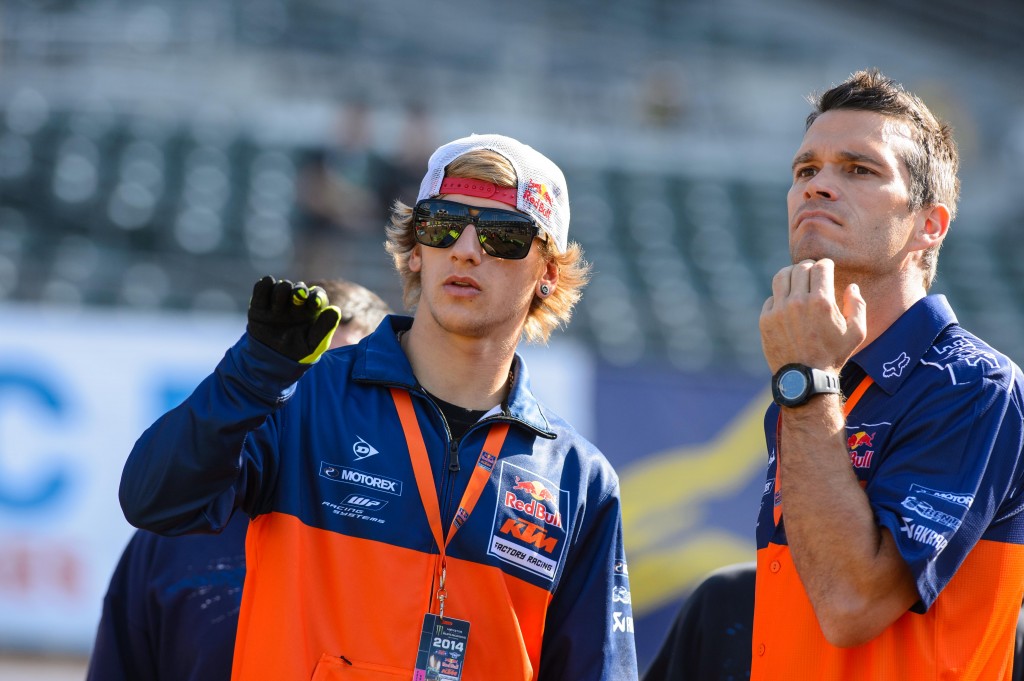 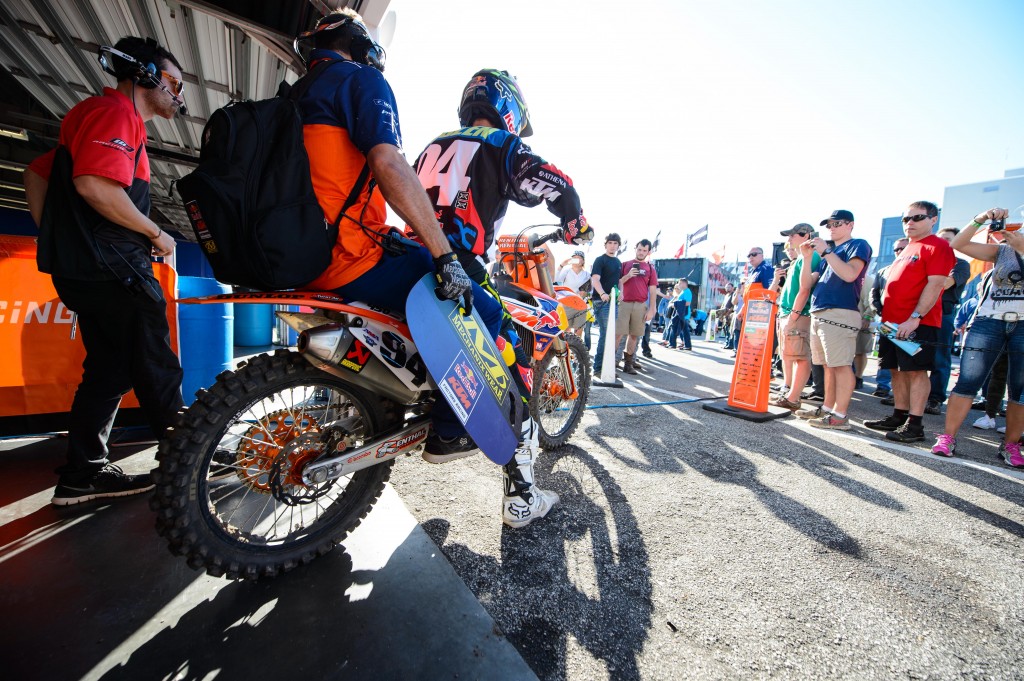 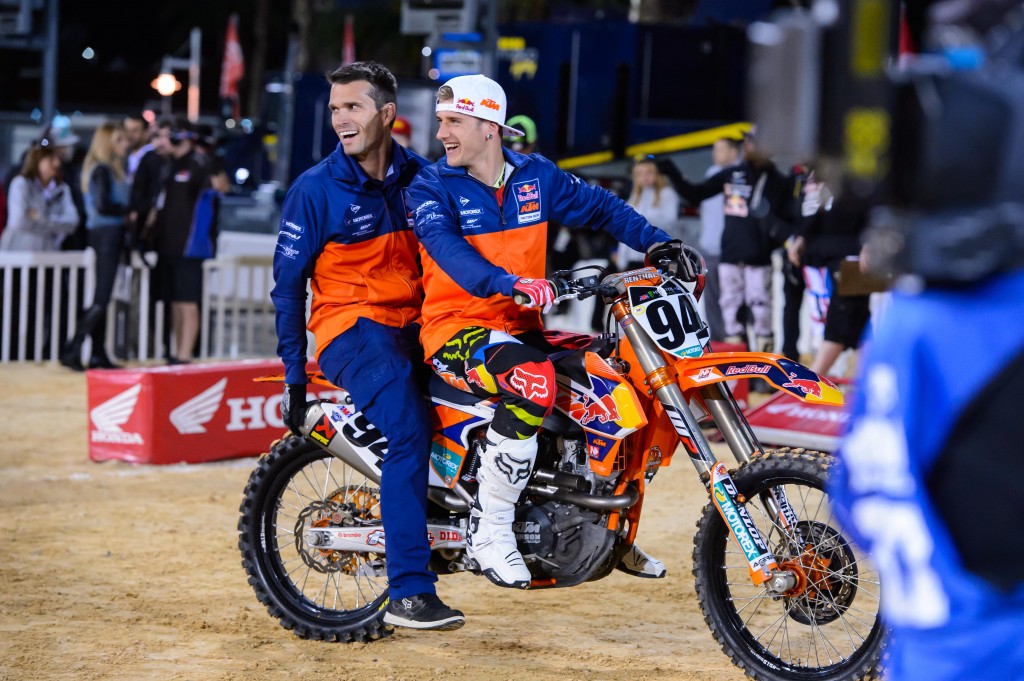 There is little doubt that Ken Roczen has been the sensation of the 2014 AMA Supercross season in his rookie term as the series winds towards a conclusion this month. Here at the KTM Blog we endeavoured to grill his mechanic Kelly Lumgair about the principal differences and areas for change that Roczen uses on his works KTM 450 SX-F compared to the model you can ride out of dealer showrooms. Here is the quick five-point guide … 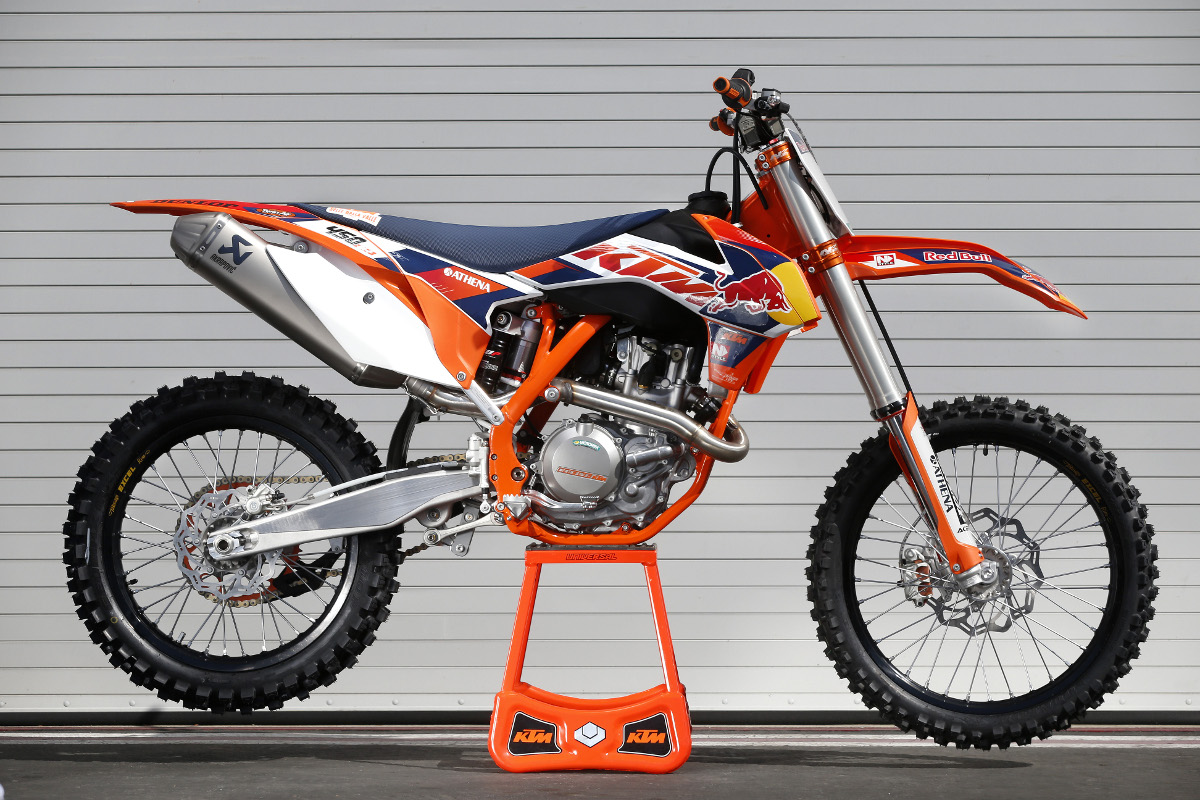 1) Wheels: Production units switched for Kite material
“The Kite wheels are lighter and stronger which is key for what we are looking for. The idea of the game is to get the bike as light as we can without compromising any reliability and we get both from these wheels. Between Supercross and Motocross I think the latter is harder on the bikes. Just through having to tear them down every week I see that they are getting beating-up a lot more through Motocross. In Supercross they get hammered through the whoops and everything is flexing. We run the suspension on a very hard setting, which helps a lot with all those impacts. I would say we have three rear wheels and three fronts for Supercross and start the outdoor season with the same quantity; that’s pretty good for all the racing that are going on.” 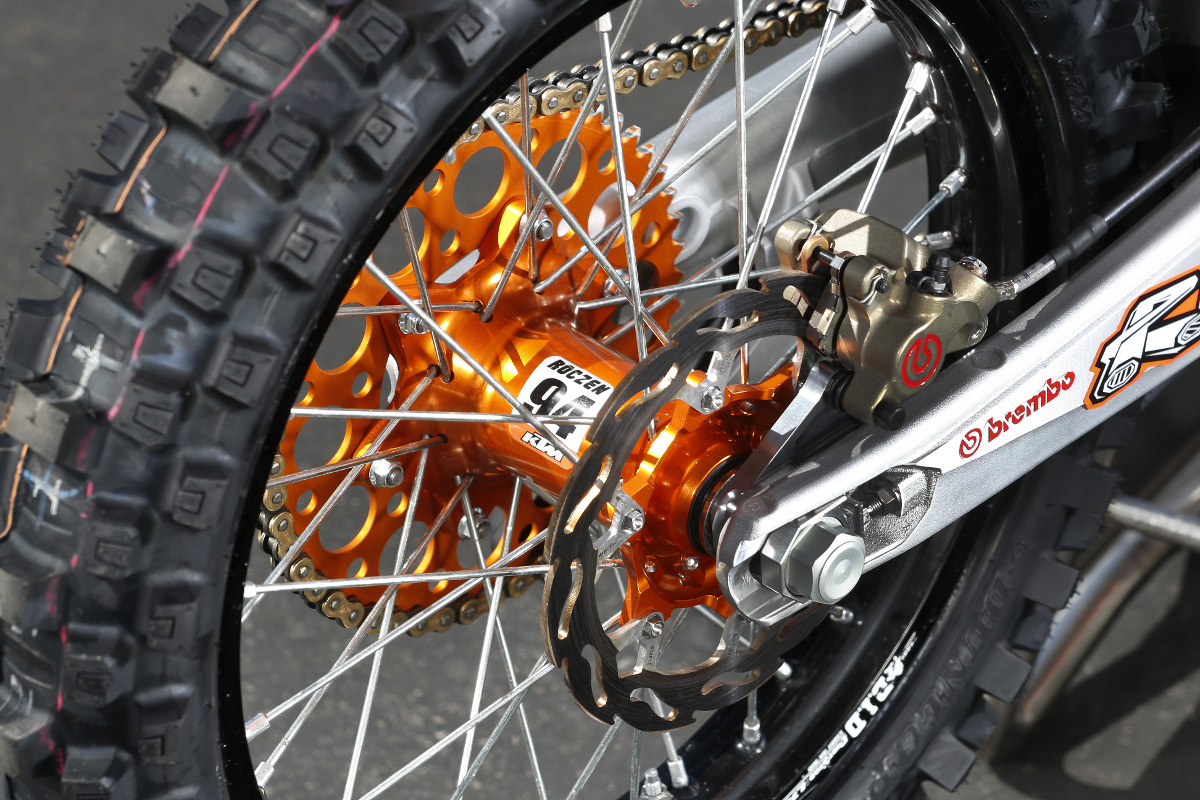 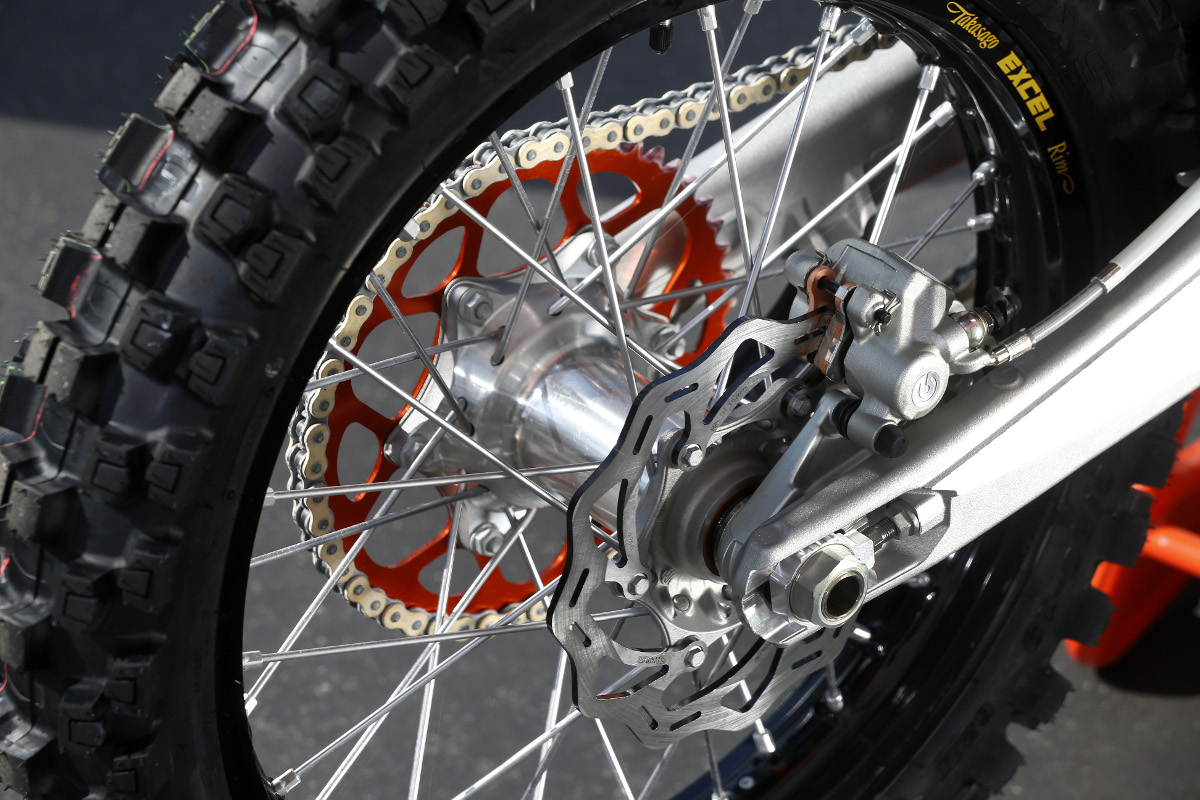 2) Saddling-up: Seat swapping
“Changing the seat definitely saves a lot of weight. Maybe a pound or pound and a half (half a kilo). The seat cover is factory and we get it direct from Sella Della Valle. The ribs on it are just to give Ken some extra grip so he can stay planted on the bike and the position he wants to be. It definitely helps for the start because when they dump the clutch then all the power just wants to push the rider back. He ran a seat hump in 2013 but getting on the bigger bike this year he felt like it cramped him a little bit. He wanted to move around on the bike more so we moved away from the hump.” 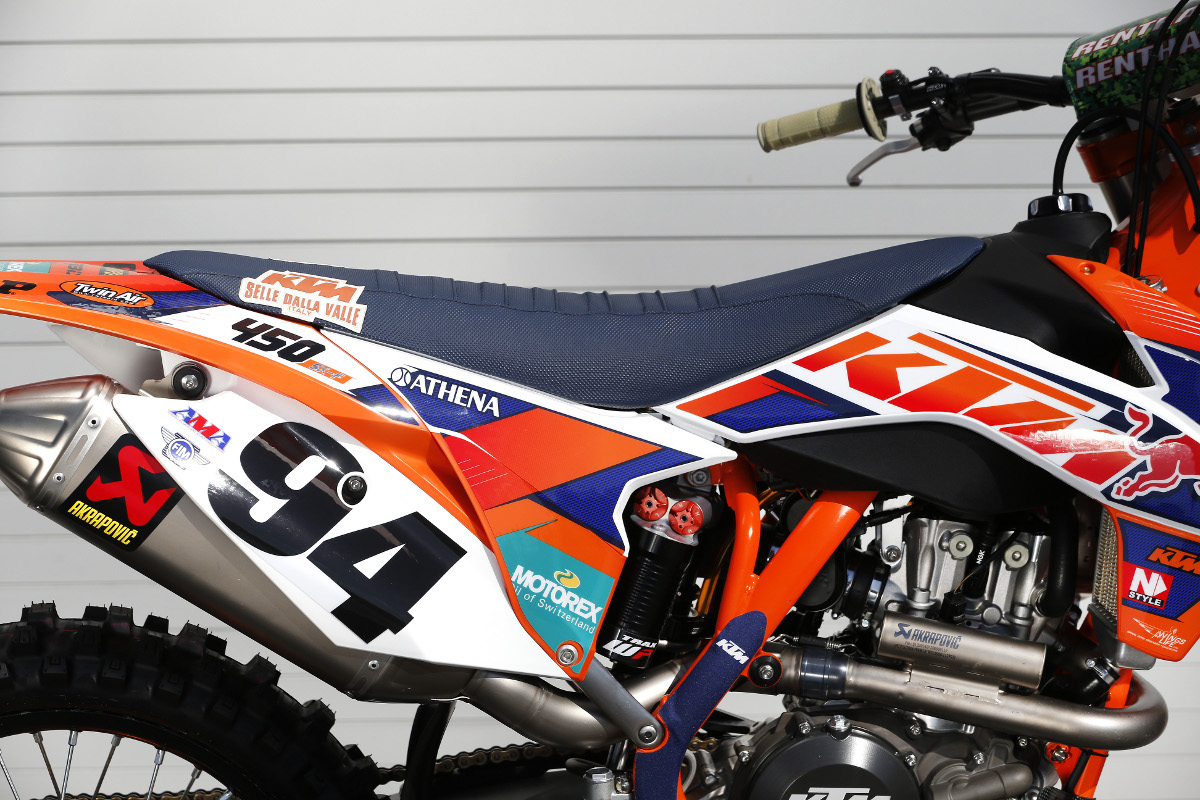 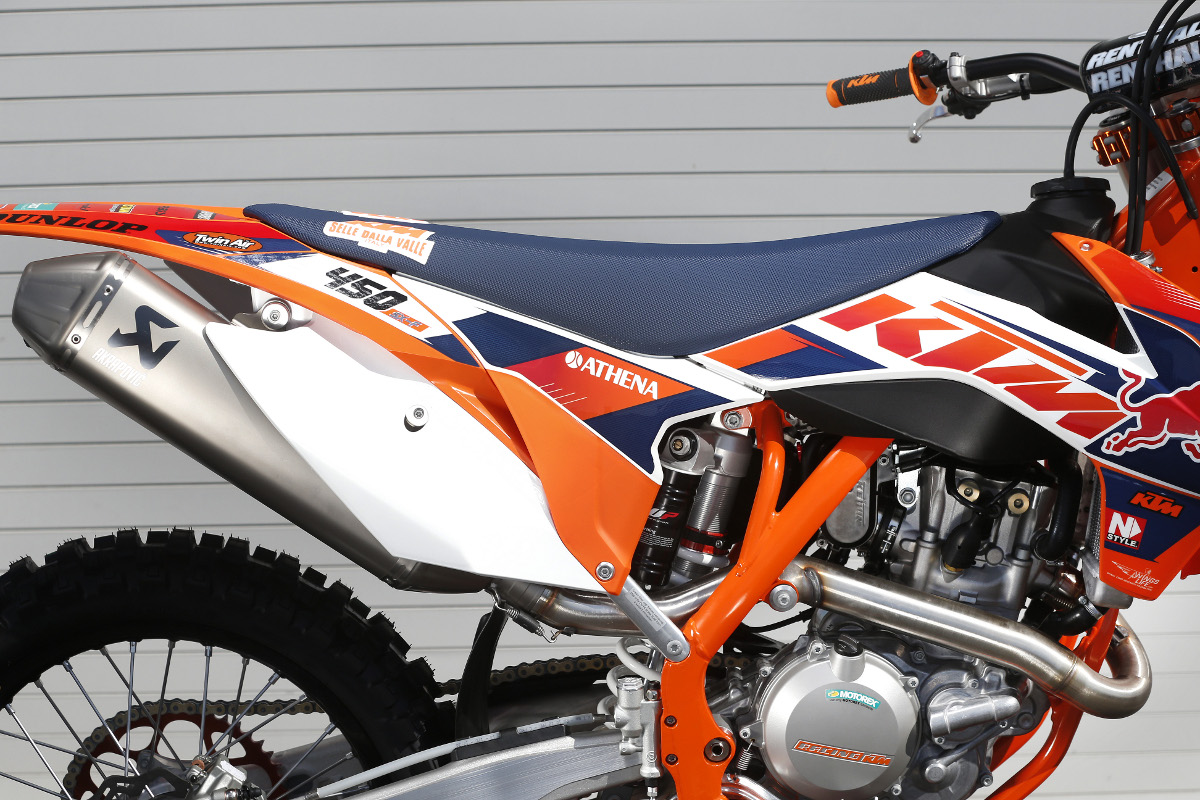 3) The growl: Akrapovic factory exhaust
“The exhaust is a factory Akrapovic system, it optimises power while sticking to the noise limits. We try to push every inch that we can get out of it. The quality of Akrapovic is second-to-none when it comes to things like the welding and titanium materials. It is top quality stuff. The hardest thing with the exhaust – as part of the engine set-up – is to keep the noise down but maximise the power. We had a couple of systems at the beginning of the season to try and both Ken and Ryan Dungey chose this one. I think it gives them more of the broader power that they were looking for. It gave us more range of usability and to be able to tailor the engine to them and what they want.” 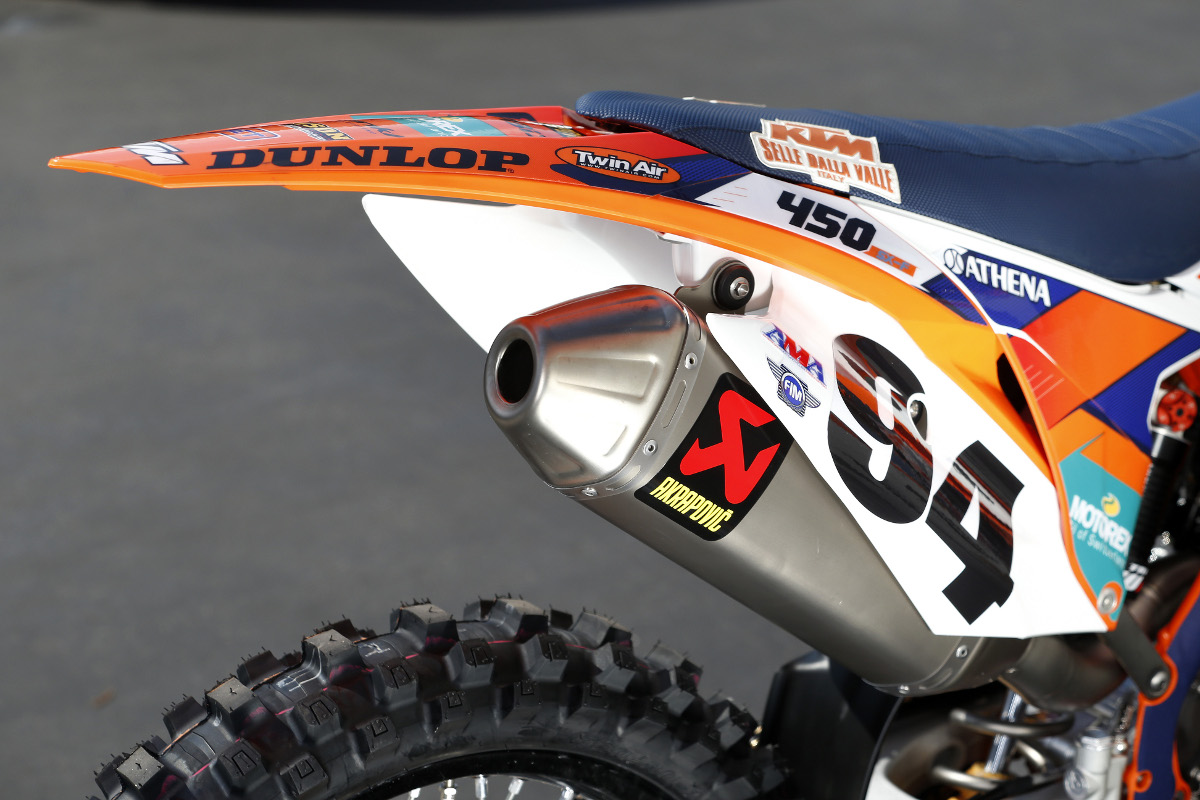 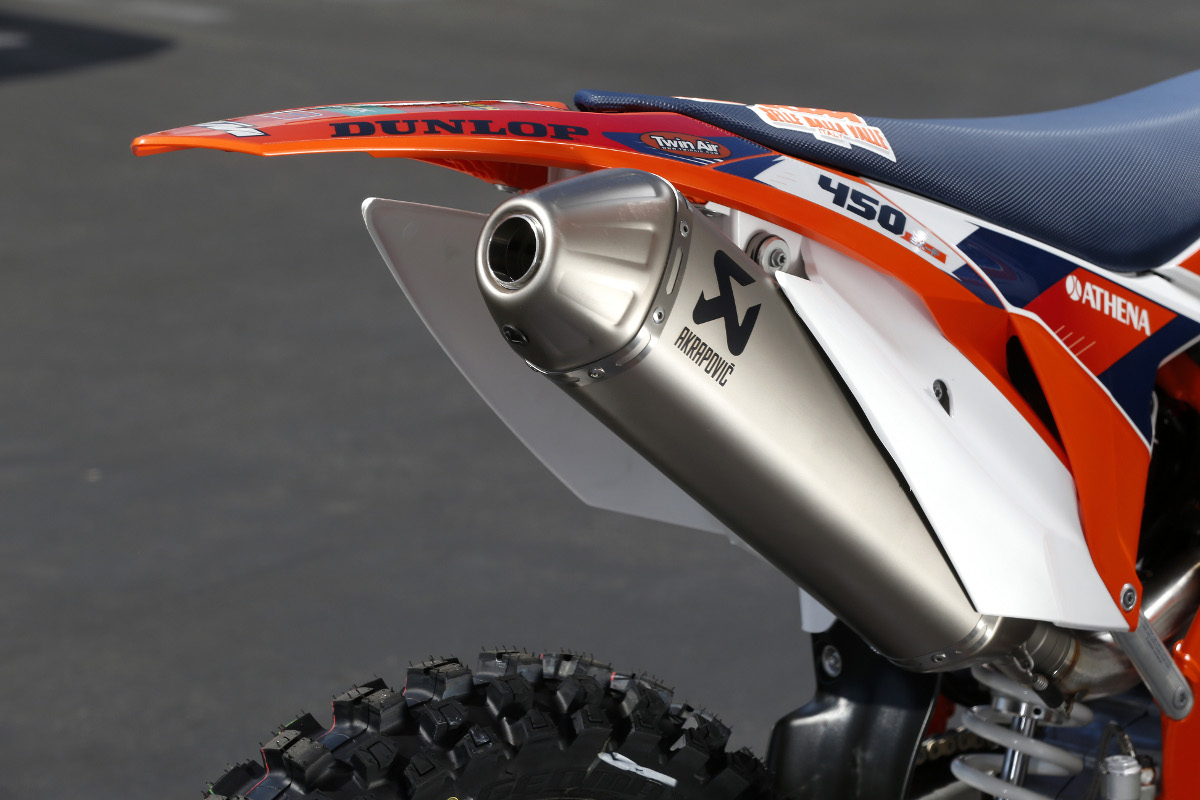 4) Just stop! No change at the front
“Ken just wants a really positive feeling in his hand and the ratio from the front brake master cylinder to the piston to the stock calliper gives him that. Dungey will run the factory calliper, which gives a more progressive feeling; softer maybe but with a bit more power. Ken wants that positive ‘sharp’ feeling. There are different settings and ratios we can play with, from the piston in the bottom to the piston in the top you want to find that correct ratio. The stock calliper has a small piston and then we have a bigger piston in the master cylinder for that positive ‘grab’. One difference to production is that we use a carbon shroud to protect the brake and – depending on the track – we can go through maybe one a race because they get torn-up. That means it is doing its job!” 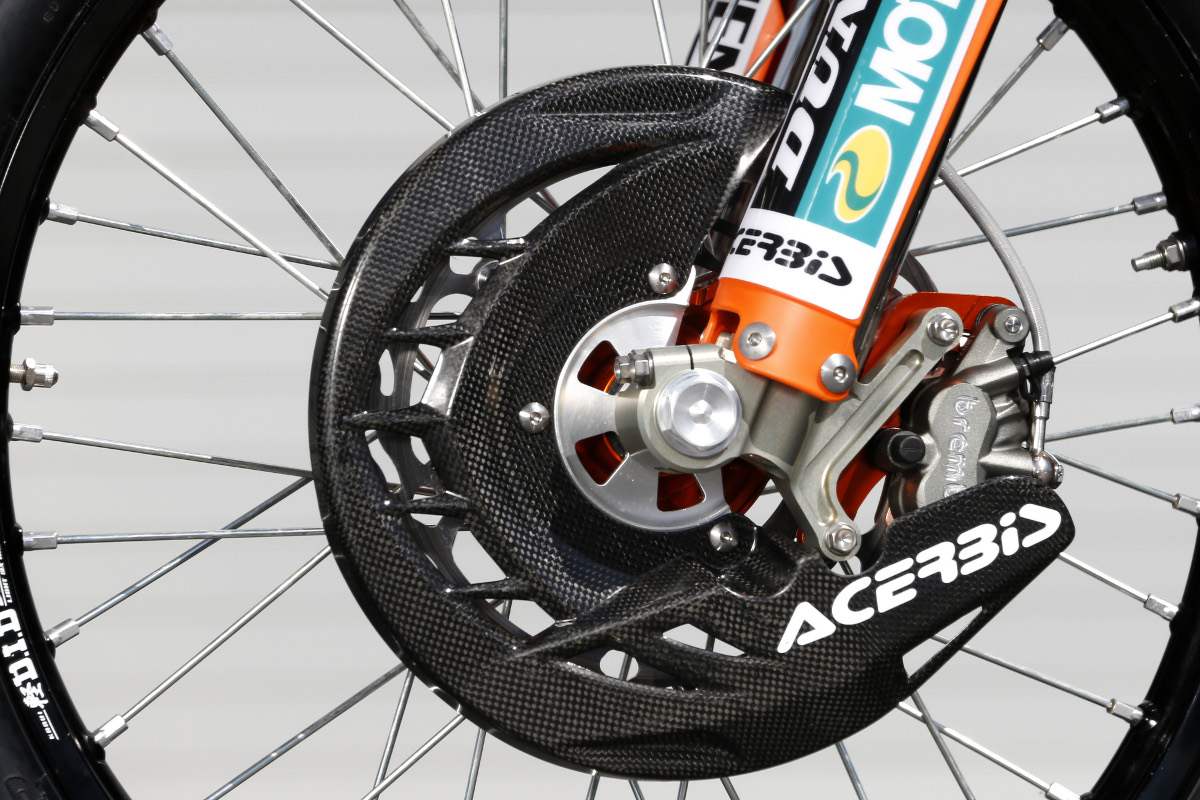 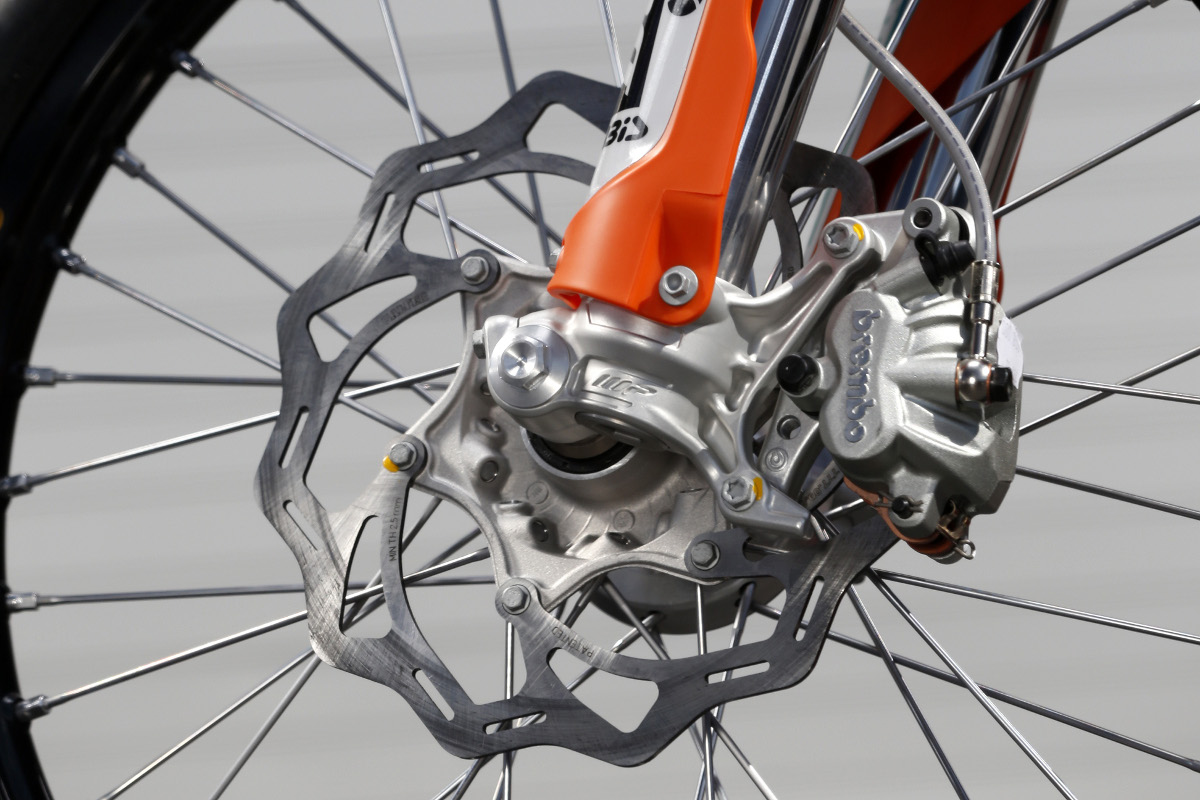 5) I’ve got the Power: Factory engines
“The majority of Ken’s power preference is at the bottom of the band; he doesn’t rev the bike. He wants everything down low and with a very smooth delivery. This is because of his style. He is a very smooth rider, he doesn’t get on the gas super-hard all the time. I don’t think he even knows what the top-end of this bike is even like because he doesn’t use it up there. We test a lot on the Dyno and we believe we’ve brought this engine to the spec that is the best. It goes hand-in-hand with the ignition, the mapping and the fuel injection system. You can fine-tune the bike to such a high detail now. The clutch is from Hinson, the crank is a bit different from production. The engines are running at their peak in competition so we have to make sure that every piece is reliable and anything that could possibly pose a problem for the level we are racing at on a stock engine then we look for alternatives. After every race the engine is stripped and rebuilt and closely inspected. Every part will have specific set of hours on it before it is replaced.” 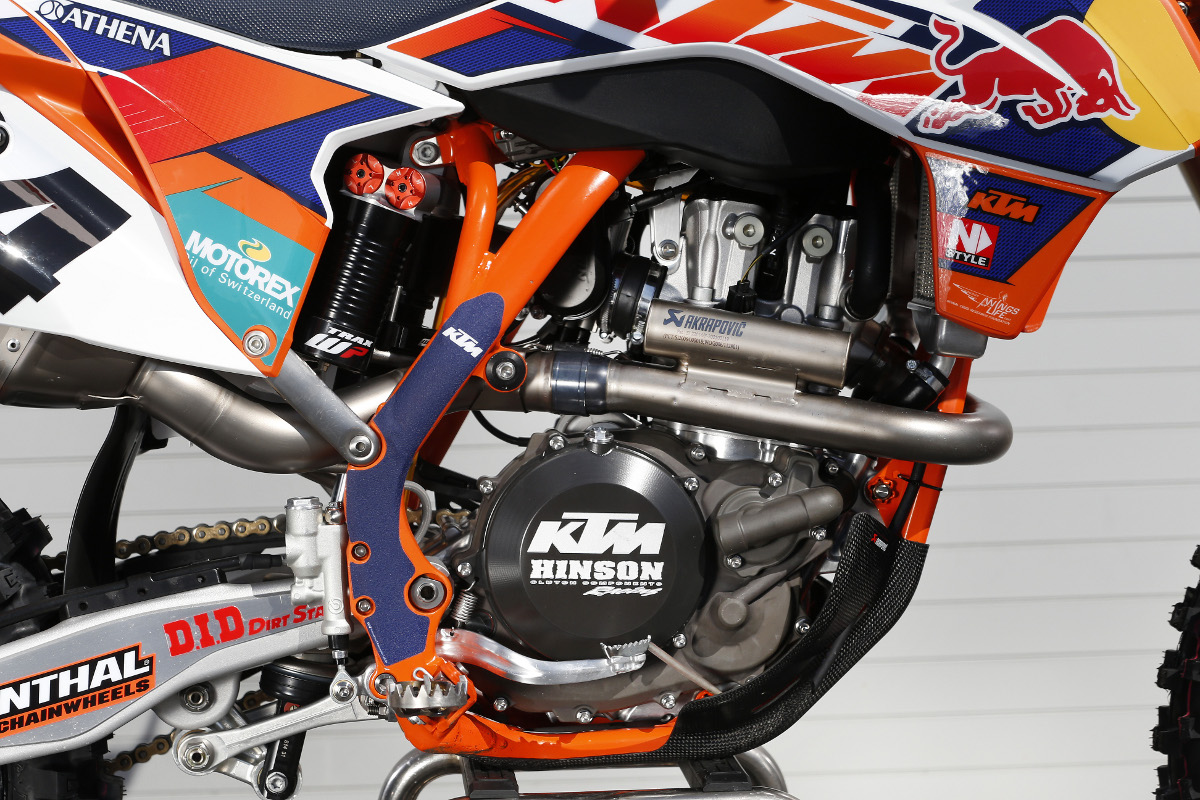 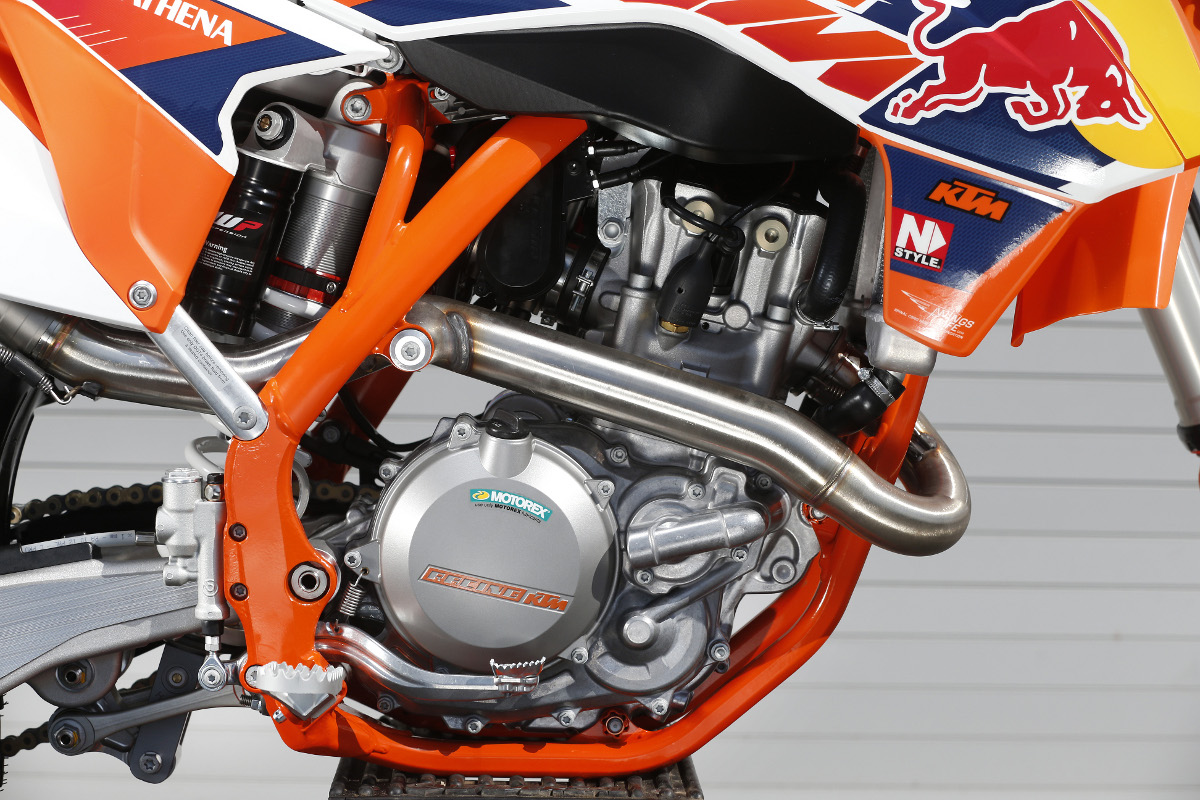