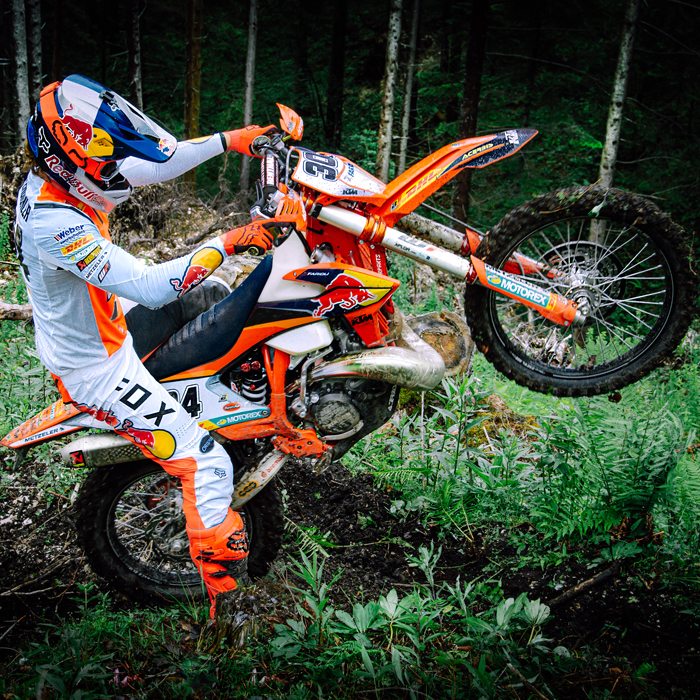 As seasons go, 2019 will always be one to remember for Germany’s Manuel Lettenbichler. Winning the WESS Enduro World Championship, the then privateer claimed his place as one of the leading riders in the sport.

Collectively proving himself a true enduro all-rounder, amongst many stand-out performances Mani took a podium at the high-speed Hawkstone Park Cross-Country and became the youngest winner of the arduous Red Bull Romaniacs hard enduro before victoriously clinching his debut world crown on home soil at the GetzenRodeo.

With time to savor the season past, Mani recalls some of his personal highlights of 2019…

“Racing through the streets of Porto is such a sick atmosphere. The streets are so narrow, the stairs are steep and there’re so many people – it’s insane. It’s so unique. I get a massive buzz from it. I loved starting the season there and it’s cool to present our sport to the public like that.”

“Sunday is business day at Extreme Lagares. It’s when it all counts. I felt like I put a good race together last year. I led for one and a half laps (of two) and got beat on the final few riverbeds. Part of me was disappointed to lose when the win was so close, but getting on the podium at round one was always the target and I achieved that. Leaving Portugal with third place was a strong start to the year.”

“As a rider that began in trials, racing Trefle LozerienAMV for the first time in 2018 was like jumping into the deep end of classic enduro. One year later and I was much faster, but I’m still not comfortable with that type of racing. Getting to race against the top guys in this part of the sport is motivation to improve. The technique they use and how they position the bike is so precise.”

“Carl’s Dinner is like the pain cave of Red Bull Erzbergrodeo. It’s brutal. I led the race for a long time on my KTM 300 EXC, but I couldn’t match Graham Jarvis in that section. I rode it pretty good, but he makes that section his own. The gap he made on everyone was unreal. I’m not disappointed though – I’ve still a few things to dial in on the Iron Giant, but I’m getting closer to winning.”

“This section of Hixpania was gnarly as hell. It was a really long off-camber rocky bank that ran along the edge of the lake. We had to ride it every lap in Sunday’s race. One mistake and you would end up in the water. It was probably one of the toughest things we had to ride last year.”

“The vlogging lifestyle came about by accident. I was asked by Red Bull to fill in when Paul Bolton got injured. I did two races, but then stayed on for the rest of the season. I was nervous at first but found my style as the year went on. It’s been fun to show behind the scenes stuff and home life. We’ll be back with season 2 soon!”

“Moments like this are what we race for. To win the toughest enduro in the world against guys like these is huge for me. Winning Red Bull Romaniacs also carries a little more meaning to me because it is so long and physical – everything has to go right all week. We put all we had into that race and came out on top. It was my first WESS victory, I became the youngest rider to win it and it happened 10 years after my father won, so it was very special for sure.”

“Anyone who’s ever finished Red Bull Romaniacs will tell you that a beer after finishing day five tastes amazing. After a big week of racing and all the pressure that went with it, it was nice to share a beer with my best mate Jeff like that. Racing is important, but times like these remind you of what’s really important in life.”

“Finishing runner-up at Hawkstone Park Cross-Country came as a surprise to me. I wasn’t expecting that because I’m not the fastest guy in the paddock in these types of races. But coming into it I had worked hard to improve, and I was riding my KTM 350 EXC-F really well. I put a clean race together and stayed strong the whole way. I would rate it as one of my best rides of 2019 because I was out of my comfort zone.”

“I enjoy my racing. Every time I’m on my bike I have a smile on my face. I’m a firm believer that fun is fast, and I try to live the Flatschingfast spirit by always giving your best in every situation, no matter what. Every day I wake up stoked that I get to ride my dirtbike for a living.”

“The dream team of 2019! To have my father and best friend Jeff by my side last year was amazing. I couldn’t have done what I did without them – it was a true team effort. They won this title as much as I did. We also showed that even if you are a privateer you can still dream big and achieve big.”

“Every rider dreams of becoming a world champion, but to do it by winning your home race in front of family and friends was on another level. It was easily the best moment of my life so far. We worked so hard all year for it and to cross the finish line as world champion was incredible. I was totally destroyed during those final few meters, but I made it and we made history.”