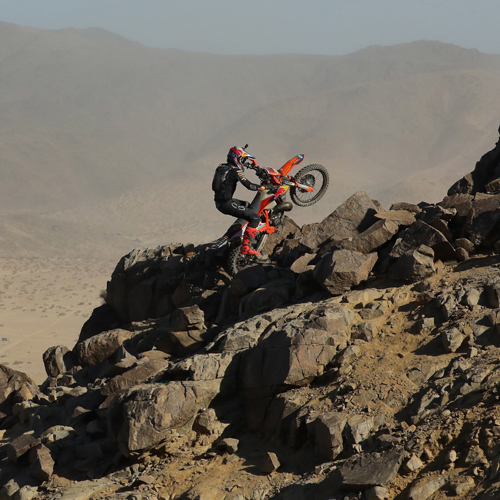 Ending 2019 as the new WESS Enduro World Champion marked an incredible season for Manuel Lettenbichler, but signing with Red Bull KTM Factory Racing for 2020 and beyond ensures an even brighter future for the young German… Lettenbichler has kicked off 2020 in the USA aboard his Red Bull KTM Factory Racing machine.
PC: Harlen Forley

Most riders dream of winning world championships, and Manuel Lettenbichler is no different. Through hard work, determination and skill he realised his dream last year when he became the 2019 WESS Enduro World Champion. Ensuring it was an extra special moment, the German did so on home soil, claiming victory at the final round of the season at GetzenRodeo in front of thousands of spectators and fans.

It was a remarkable moment for the 21-year-old, but even more so when you consider his success came while still a privateer rider. From eight WESS starts, Mani secured seven top-five finishes, of which five were podium results. He also became the youngest-ever winner of the demanding Red Bull Romaniacs.

Factoring in his AMA Extreme Off-Road Grand National Championship at Tennessee Knockout, the likeable German is now one of the most exciting prospects in enduro and the rider to beat once the 2020 season gets underway…

Mani, with time to reflect, what did it feel like to become the WESS Enduro World Champion by winning your home race at GetzenRodeo last year?
Manuel Lettenbichler: “Ah, for sure it was a special moment to become world champion at GetzenRodeo. It’s a home race for me and last year with it being a WESS race over 30 people from my hometown came to watch me race, too. Having won the race in 2018 I really wanted to win it again and try to take the title in style. GetzenRodeo is so tough – by the time you reach the finish line you are exhausted, so when I took the chequered flag I think the emotion of the occasion really hit me then. It was a cool moment and for sure one I will carry with me for a very long time.”

When did you begin to believe that you could win the 2019 championship?
“Going to Hawkstone Park for round six (of eight) I was so nervous about things because it was cross-country. But after finishing second in the race I felt different. I did a good job and showed that I could be strong on the KTM 350 EXC-F in a race that was out of my comfort zone. I wasn’t as worried about those fast races as I previously was. I guess it was then that I began to realise that I was a contender for the title and that I was good enough to become champion. Moving on to BR2 Enduro Solsona I tried my best and it showed with a fourth place. It put me in a good place heading to GetzenRodeo.” 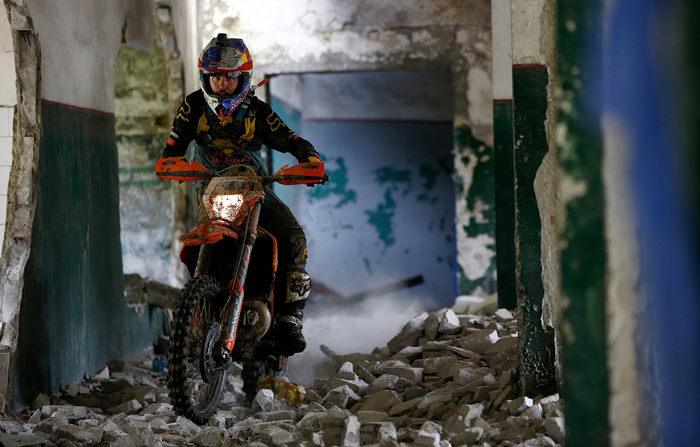 Becoming the youngest ever winner of the Red Bull Romaniacs in 2019 was a special moment for Lettenbichler.
PC: KTM

Do you feel those results showed that you’re more than a hard enduro rider, that you’re now a complete all-rounder instead?
“I hope so. I’m naturally better at the hard enduro races, but now I’m beginning to bridge that gap in the faster conditions. I’ve a long way to go to match guys like Josep Garcia or Nathan Watson, but I’m feel better out of my comfort zone than I did before.”

You enjoyed a lot of success as a child riding trials, do those skills still help you in enduro?
“Having a trials background is one of my best assets. The skills I learned as a child never go away. I use them every time I ride, and they get me out of every bad situation I might get into too! Trials teaches you so much – balance, throttle control and clutch use. You learn how to find traction where normally there shouldn’t be. I think if you ride motocross or enduro, they’re skills that will always stay with you as a rider.”

What was it like competing as a privateer at the highest level of enduro? It brings difficulties but also rewards, right?
“My support from KTM was really good and I never felt like I was at a disadvantage with my bike. Enduro is unique because it always rewards the skill of the rider and once I was out on track I felt equal. But it’s the other things that come with racing – the behind-the-scenes stuff that make it tougher for a privateer. There is a lot more to organise and you spend a lot of hours driving to and from the race that people forget about. But at the end of the day what our small Flatschingfast team of Jeff, my father and myself achieved was incredible. I hope we showed to other privateer riders that in enduro it’s possible to win.” 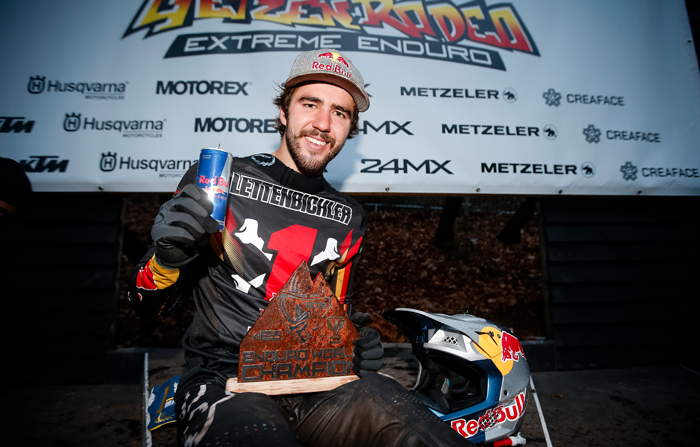 What differences and help can joining a team like Red Bull KTM Factory Racing bring?
“I’m sure there will be differences even if it’s only the beginning of this new chapter for me. For sure I will have less organising to do to go racing. We can prepare the bikes better and also prepare specifically for certain races, which is an important thing for a rider. I feel like it will be the little things they do, the things you don’t easily see, that will make the job of focusing about what happens on the racetrack easier. I’m excited to work closely with the team this season when it begins and become better as a rider.”

Spend five minutes in the race paddock and it’s easy to feel your positive vibes and enjoyment of racing carry through. Is being happy the secret to being fast?
“It definitely helps a lot! Of course, you need skills and to be happy with your bike to be the complete rider, but being happy makes me faster, I’m sure of it. I always want to be a positive person because when you enjoy what you do it makes your job easier. I started riding bikes to have fun and I always try to keep it that way. So many people would love to race motorcycles as a job, so I’m humbled that I can. Even when it’s raining, muddy and cold it’s still better than working 9-5 in an office. Keeping a smile on my face reminds me of that every time I ride!” 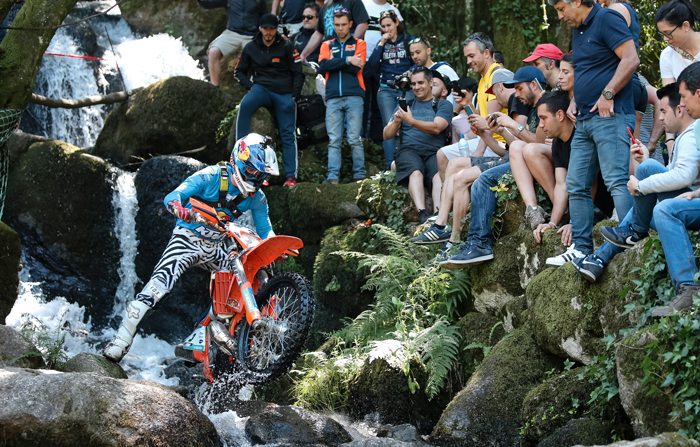 This year you will also do some races in the USA. As the current AMA Extreme Off-Road Grand National Champion, what’s the scene like and how is hard enduro growing there?
“In the USA hard enduro is growing massively. Everyone you speak to is excited to go ride and try something new. It’s cool to see because before it wasn’t that well understood. When I raced the Tennessee Knockout last year I could see that there is a big push to make it bigger, so I’ve been excited to be back in the US to do some more races. Also, with WESS going to the USA more people will tune in and it will make the sport even bigger.”

You’ve won Red Bull Romaniacs and GetzenRodeo, so is winning Erzbergrodeo Red Bull Hare Scramble the next big race on your bucket list?
“I’m so happy with my wins at Red Bull Romaniacs and GetzenRodeo, but of course winning Erzbergrodeo is on the list. It’s the Holy Grail for every hard enduro rider. If you win this race then the world knows about it – it’s that important to the sport. I’ve been trying my hardest for the last two years to win it, but it hasn’t yet worked out for me even though I have been on the podium twice. I’m really motivated to go there again and try my best. That’s all I can keep doing. It’s a special race because it’s so unique. With 500 riders on the start line, you need a good race from the beginning, and it has to go perfectly right. It’s become so competitive now that if one thing goes wrong then you can’t win.” 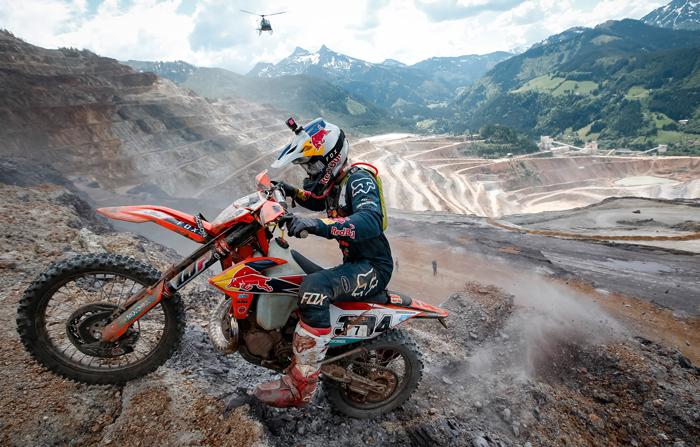 Looking at the 2020 WESS Enduro World Championship calendar and what are your thoughts on defending your world title? **Editor’s note: this interview was given before the Covid-19 outbreak.
“The calendar for this year looks exciting. There are some great races in there – all of the big ones. It’s cool to have Red Bull Megawatt back. We start again at Extreme XL Lagares and though I haven’t won it I’ve been on the podium twice, so it’s a strong one for me. It’s cool to go to America with the series too. It’s going to make our sport more worldwide and professional. I think with Hixpania as the final, the atmosphere will be similar to GetzenRodeo, too. I haven’t really thought about defending my title yet but for sure it’s what I want to do. But I’m going to take it one race at a time and just get out there and have fun racing my bike.”

Editor’s note: The eight-round 2020 WESS Enduro World Championship was due to begin in May – however, due to the global Covid-19 pandemic, at the time of writing this blog, the racing schedule has been delayed and will be announced later this year.