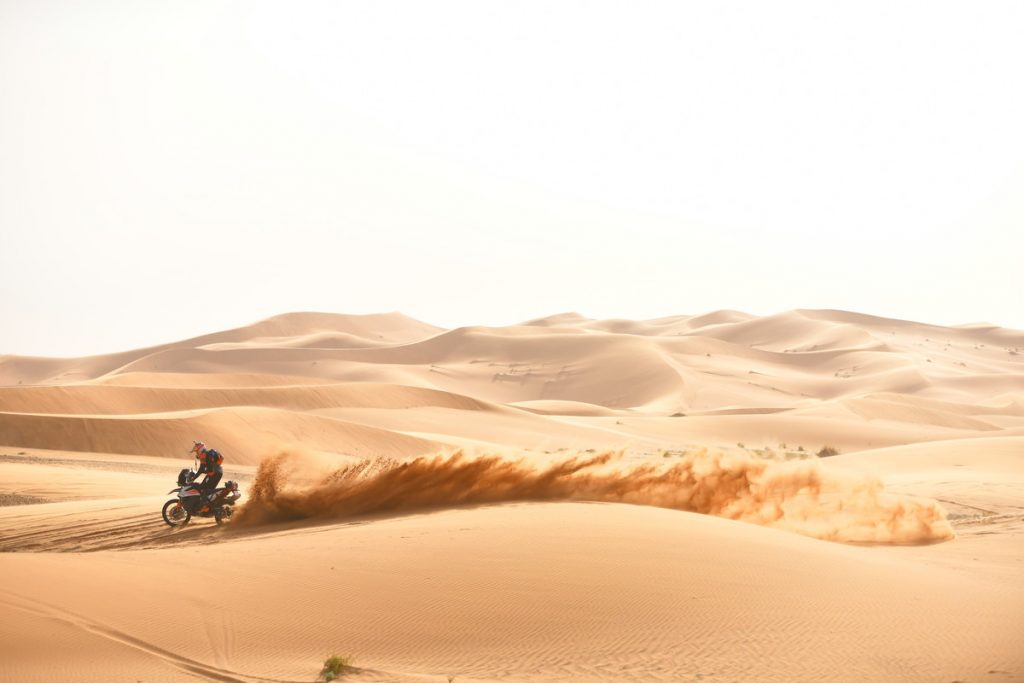 Marc Coma is back in the saddle (in his natural habitat)

With the first KTM Ultimate Race just around the corner, we had a chat with Marc Coma, the great warrior of the African and South American Dakars. We discussed about the mysteries of the rally raid and the irresistible attraction of the Dakar. 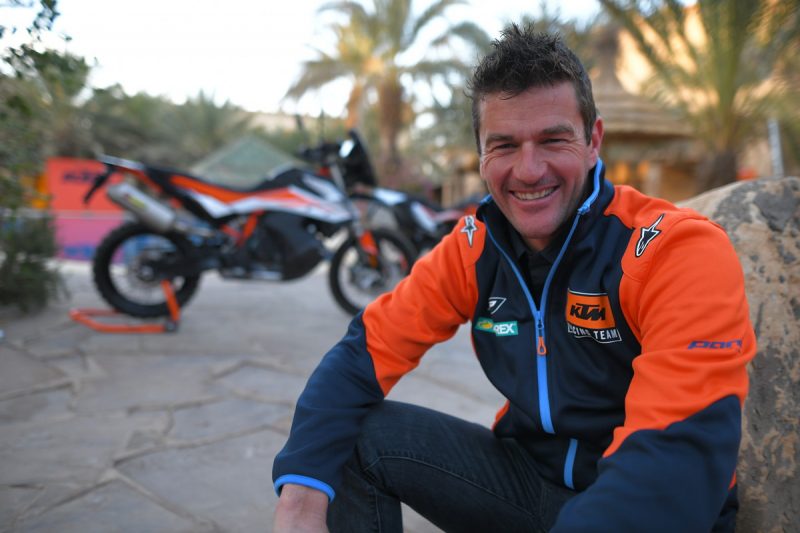 The toughest race on the planet has been changing a lot lately, yet its spirit and complexity have remained the same throughout its 41 years. A challenge for those who go, a dream for those who stay, like Thierry Sabine used to say; no one understands this better than Marc Coma, a five-time Dakar winner. He’s never been a dreamer, but the rally raid is no dream either. It’s one of those things that make a man feel more alive. But beware, as Marc will confirm later on, rally raid is extremely addictive!

We bumped into him in Morocco, during the KTM 790 ADVENTURE and KTM 790 ADVENTURE R media launch, in his now already vintage gear, dusty from the desert storm, but grinning nonetheless. With the considerable help from the desert wind, this half-provocative, half-shy smile has ingrained deep laugh wrinkles in his face. They are a sign of his life in racing, an expression of determination, stubbornness, fire and fight. On the other hand, his calm energy signifies his wisdom and contentment. Maybe he could have achieved more than he did, although he is convinced that he has achieved enough. He knew when to start and when to stop with the rally. He knew when to leave the ASO Sports Director’s position and progress to general manager of KTM Spain, KTM´s fifth largest subsidiary in the world. He always knew how to find that balance between speed and caution. He was known for the consistency he brought with him from Enduro. We asked him to share some of his experiences and ‒ why not? ‒ advice.

Marc, the KTM Ultimate Race is coming up. Let’s talk about the rally raid as a discipline: How do you get started, and what does it take to be a champion?
“(Laughs) This is a bit philosophical, but I’ll try to give some sound advice. It’s a very good idea to get into the rally raid with an already developed personality and some serious competitive experience. The best way is through Enduro, this for sure is the best basis. Of course, there are also many former MX riders around, but as an MX rider you will need more time and patience to learn the rhythm of the rally and to manage the race itself. We have seen some exceptions in the history of the sport, such as Fabrizio Meoni. He had some Enduro training behind him, but then he actually grew inside the rally. Casteu is another example; he had more or less the same transition as Meoni and achieved success. There are no general rules or recipes for success, but in the Dakar you have the best shot as a former top Enduro competitor.”

Rally raid is a very complex discipline. What are the basics rally rookies need to learn?
“Nothing is easy. Navigation itself is complicated, there are a number of things to master: waypoints, control points, speed zones etc. It’s vital to be a good navigator in order to win a rally, as speed is of no use without good navigation. Then there is the tactical aspect to consider, which is a skill you can learn only through experience. Last but not least it´s the throttle management ‒ you simply need to know when to go all out, and when to tighten the reins. The sooner you master it, the better. You will avoid crashes and other costly mistakes.”

What kind of a mindset does a rally racer need?
“Besides its complexity, the other specialty of the rally is its length. A good rally racer understands that a rally doesn’t end after a stage. You need to be on the ball 24 hours a day. Once you have completed the super special, the preparation for the next day starts immediately. Before the race you have to come up with a general strategy, then you have to consider the tactical aspects of each stage. In order to make it work you need to understand the complicated rally rules. You want to do it right, without risking penalties or even a disqualification. Experience again comes into play. Rally rules are basically a heavy file that can’t just be absorbed on the first day. A 100 percent focus and commitment are a good base to start with, but to win you need to manage and control all these factors. Therefore, some patience doesn’t hurt ‒ the secrets of the rally can be understood only through experience. To truly understand it you must live and breathe it.” 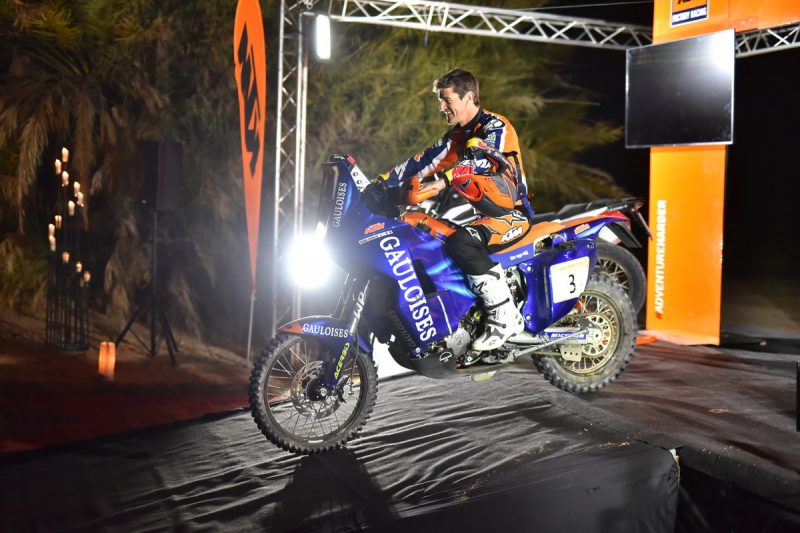 Did you immediately discover you had the potential to reach the top?
“I knew I had a very good technical base, physically I was very strong, and I was drawn to it. And still I was brought down to earth already on my first rally. Controlling all those factors I spoke of was no piece of cake. The results didn’t come straightaway on the first rally. However, I immediately felt comfortable in the desert, we just clicked. At the same time, I knew at once that I felt at home inside the rally.”

Why did you decide to replace the Enduro bike with a much heavier machine in the first place?
“At some point in my life I realized my Enduro career had reached its peak. At the world level, I was achieving results between fourth and sixth place and couldn’t seem to make the jump to the very top. Despite my youth, I was not prepared to persevere any longer. I trusted my gut feeling that enough is enough, and to move to the rally. Somehow, I knew spending more years in Enduro would be just a waste of time. I was young enough to stay in Enduro, but also young enough to master another discipline.”

How did you survive your first Dakar and what did you learn about yourself?
“The first Dakar helped me understand that rally was the place for me, and that my potential was already there. Anyway, you don’t really understand it the first year; you’re pretty much lost. You get a taste of the desert, you get a glimpse into the rally machinery, but that’s all. You grasp the navigation first, and then find out that there’s a lot more to learn. It was tough and I didn’t mind. I already liked the rally on TV when I was a kid, but I loved it even more when I finally joined the party.” 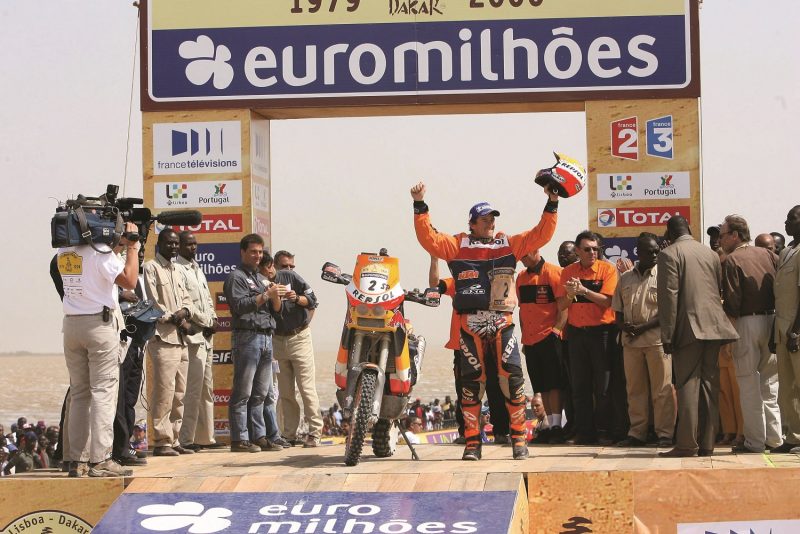 What is for you the main attraction of the rally raid?
“Rally is extremely addictive, everybody will tell you the same thing. You get hooked on the almost surreal conditions in the desert, the sense of adventure, even on the fact that it is so hard. All these factors create a connection between you, the nature and all the special people you meet on the road. The more you suffer, the more you learn about yourself and more you crave to come back. The rush draws you back. Fighting with the elements takes you back to the era of the gladiators. When you are alone in the desert, maybe with a storm chasing you, you feel like a warrior. No other discipline can give you this feeling.”

How does it feel to cross the finish line as a winner?
“It is hard to put it into words, yet it’s not the glory of winning that pulls you in. Winning itself can be addictive as well, but that’s not what the Dakar is about. What makes you come back for more desert is the whole experience, the whole journey.”

But still, you won five times. What’s your secret?
“I’ve always been very professional, and I’ve never lost my passion for competition. For sure I have an analytical mind and I can be also very critical. In short, I was very honest about my downfalls and worked hard on them. Looking back, I also realize that I had a very lucky hand with choosing my team.” 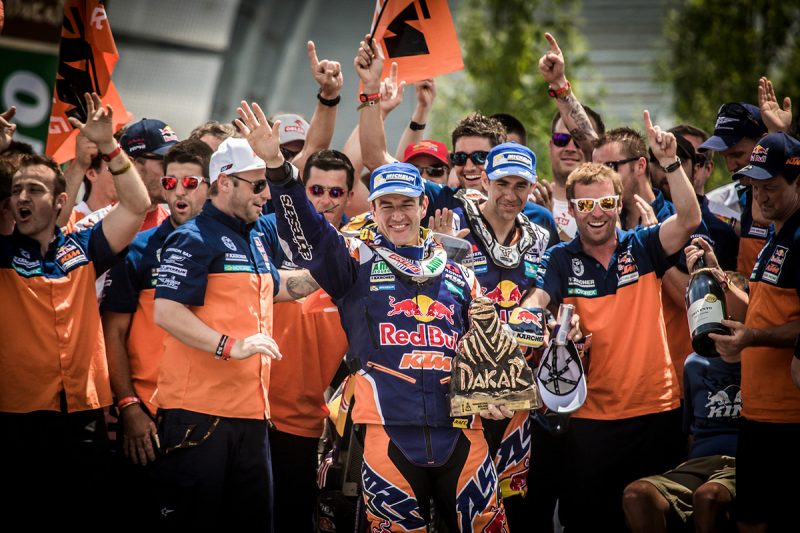 The same as with Enduro, you also knew when to stop with rally raid. Coincidence or wisdom?
“In my last years of competing I noticed I was taking risks I hadn’t been taking before. I am quite sure I stopped racing when I was still competitive enough to win one more time. And I still felt it was time to stop. When you feel that … to do it for money or more glory is a trap, a nice hole you can fall into very easily.”

And now you are back in the saddle in Merzouga, as a coach for the KTM Ultimate Race, together with Chris Birch and Quinn Cody. How does it feel to be back in the desert?
“It’s been 4,5 years when I last rode in the desert. During my period in the ASO I was doing the exploration and the route in a car. Yet nothing compares to being alone in the desert on your bike. Now I am back in the orange family, we are doing great work together. This was always my happy place and I’m enjoying it. Also, I am in Morocco with friends. I feel the same pleasure I have always felt in the desert.”

The desert … What’s the catch?
“Behind every desert there is a great story about great people and great civilizations. When I am in Sahara, I think of a great era of the Ancient Egypt; in the Middle East Lawrence of Arabia comes to mind; in South America you could feel the presence of Incas. Each person experiences it differently. One might go there to race and nothing more, while others can connect with these places, and can always carry them with them. This is how I experience the desert.” 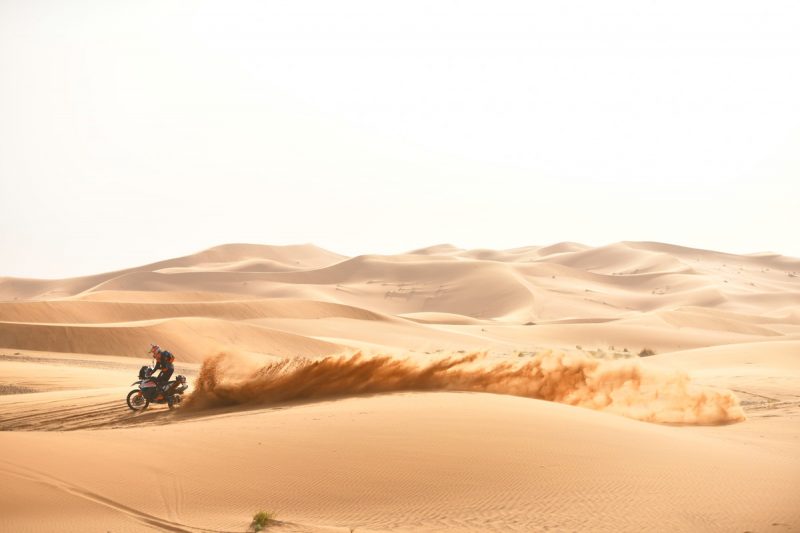