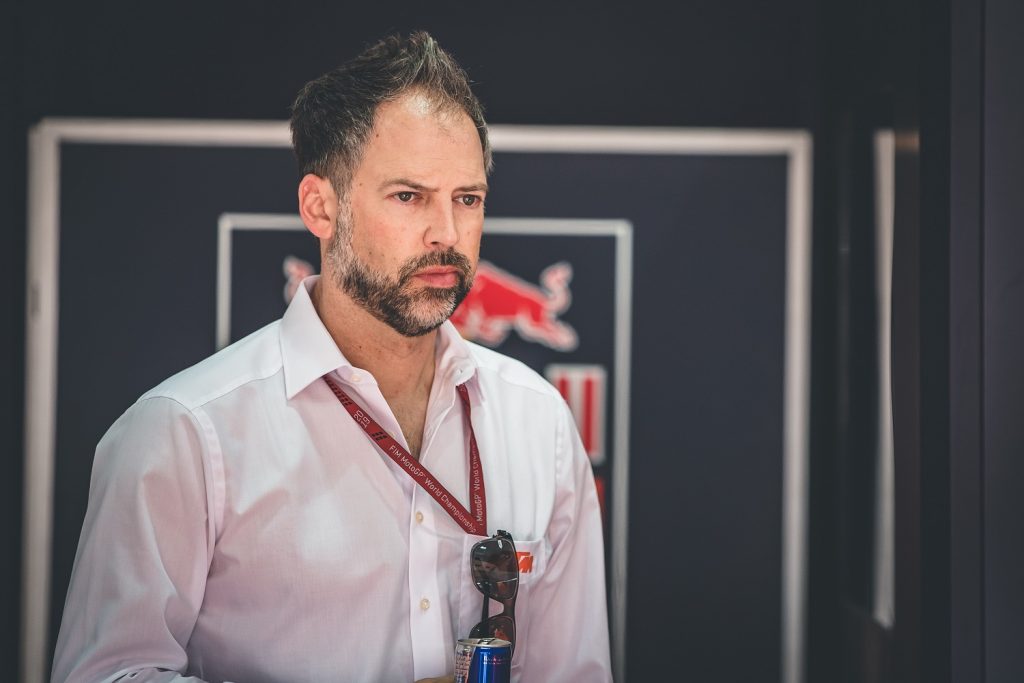 Numbering well over 120 people and fabricating up to 70 race bikes to tackle classes from the Red Bull MotoGPTM Rookies Cup to the peak of MotoGPTM, the road racing division of KTM’s motorsport department has expanded and developed at a rate of speed akin to the motorcycles themselves. Pit Beirer is at the helm of any operation involving an orange two-wheeler going for a chequered flag but responsibility for MotoGPTM in particular falls to Jens Hainbach. 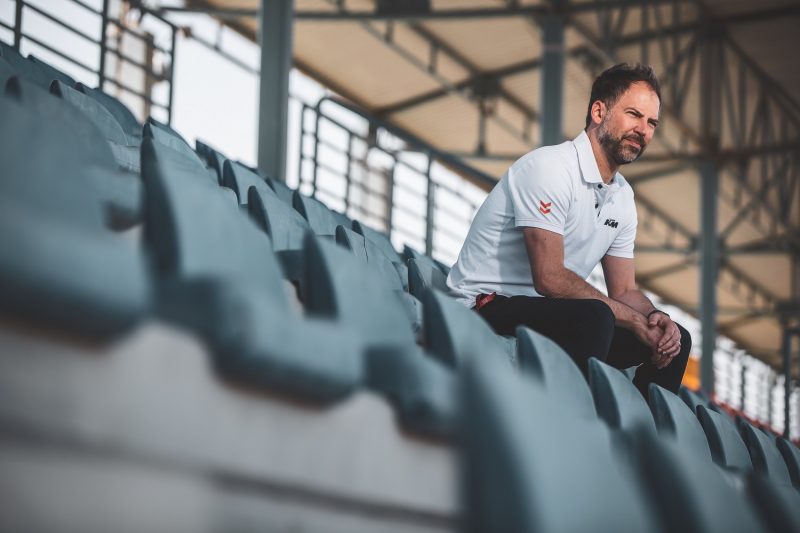 The 46-year-old from Schotten, Germany has been wearing the orange (or white) shirt for three years and has overseen the evolution of KTM to become the only manufacturer with significant presence in all three principal classes of MotoGPTM.

Jens is often easy to spot around the vast KTM structure in the Grand Prix paddock and always ready with a friendly smile and handshake. His accessibility is a pre-requisite. He has to deal with multi-national team staff, technical partners like Motorex and Akrapovič (to name just two), athletes from wide-eyed teenagers to experienced veterans like Dani Pedrosa and Mika Kallio, media, promoters and many more. His job is enviable but also complex and far-ranging.

In an effort to understand more about a role and the person that has become pivotal to KTM’s sporting, development and marketing output we asked for some of Jens’ time as MotoGPTM finally cranked into life for 2019. 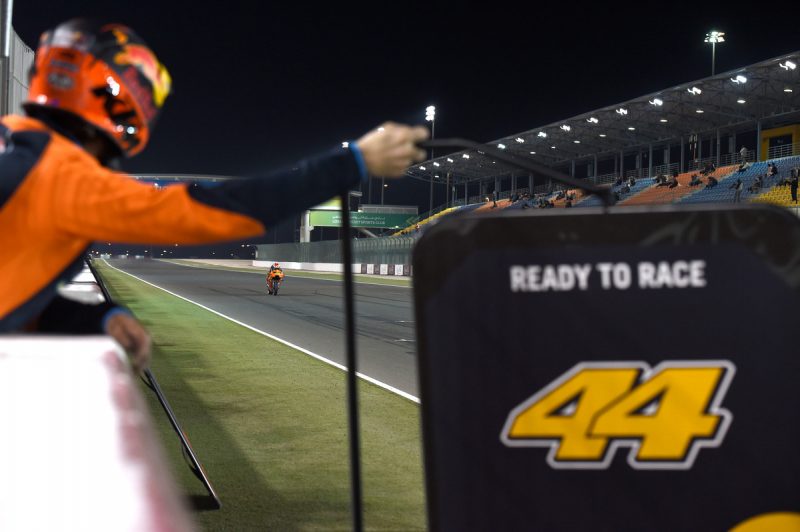 How did you move into KTM?
“I knew Pit from our history in motocross and he had invited me to look around the new race workshop in Munderfing. I was working in another motorcycle company in Rosenheim, Germany. It was not too much of a drive and so I decided to visit. The Racing Department was still in the old headquarters and the new one was being built and the whole operation looked impressive. I had no idea that KTM’s racing setup was so big. Pit gave me a tour and then asked me to work with him because they were searching for someone to handle the WP side of the department. If you get an offer to work with Pit then there is not a lot to think about! To join that group is an opportunity you don’t get too often. So, I accepted. After a few months in the job and an understanding of how things worked Pit asked me to take control of the road racing section: Then you start thinking a lot! It’s not something you are presented with every day and you have to think about the responsibilities involved. In the end I agreed.”

What strengths did you bring or was it a new world to discover?
“I was a former racer learning about the business part and it was a great education. I felt I could understand both sides: There is the sporting element but then there is also the commercial aspect of motorsport. I knew what was needed when it came to the demands of the business but then what the guys also required at the track and what they went through each weekend.”

Racing is always a compromise and about providing the best resources possible to a team or rider. Even with your background was it a learning experience to create that environment in KTM?
“Yes, you can never just say ‘I know everything about what you need’. You have to understand the structure that is in place, how it is working and find where there is room for improvement. Then you can step in and question some things or working practices. In the end there was not a lot to change because the right people and the right methods were present in the correct areas. It was just a matter of connecting everything together and pushing for the best result from all of them.”

Pit has the management philosophy of the best personnel for the best jobs. Was this something you fully subscribed to or did you have some of your own ideas?
“For sure you should try to bring your ideas to the job … otherwise there is no need to be there. I’ve done that … but it is also very clear that if you have the right person for the job then you have to let them get on with the role that they are there for. One of the most important things for leading a project is trust in the people for the position you gave them. Sure, if something is going wrong or heading in a wrong direction then you have to step in and tell them, but your place is not to tell them how to do the job.”

Can you give an example of a strategy that worked well?
“There is nothing in particular I ‘invented’ or decided alone. We build and decide a strategy for the future together with Pit. There was one change, and that was the approach in Moto3TM: Spreading support through several teams and not just having one central factory team. As is set in the regulations we wanted to give the same opportunities to more people and it is easier to handle the rider situation instead of just having one or two in one team. We now have fifteen that we can get involved with and look-at to judge who will be the best to move onto Moto2TM and maybe that final step to MotoGPTM.” 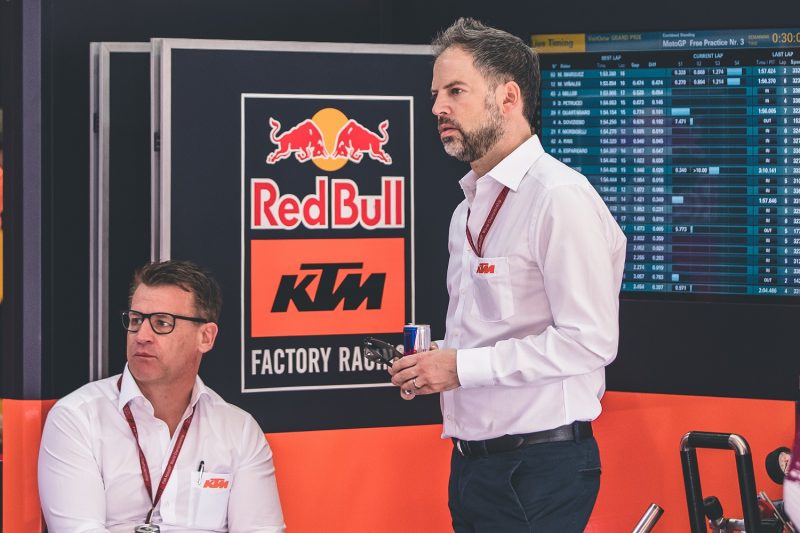 A MotoGPTM fan might see you in the white shirt and wonder ‘what’s his role?’ So how has the job been in the last twelve months and especially with how much MotoGPTM has grown inside KTM?
“There always has to be someone at the front and who shows his face and that is Pit for sure. My role is not to be doing the interviews but to be doing the work in the background and that means dealing with the teams, the riders and our partners. Of course that gets busy when there are more riders and teams to work with.”

So, the Tech3 team deal must have been a busy time?
“Yes … but it was also fairly simple because Hervé Poncharal [Tech3 Team Principal] was also looking for other options and to join us. He trusts our project 110%, and that was the case from the start, so we didn’t really have to convince him to come over to us. There was mutual interest and it was not a big task. For sure to then get everything started and running increased the workload for all the people involved in the project. I’d say we’ve had a 20% increase in that respect. We were prepared for 2019 but perhaps not at the full 100% to get everything running, keep it running and moving all the supply chains.” 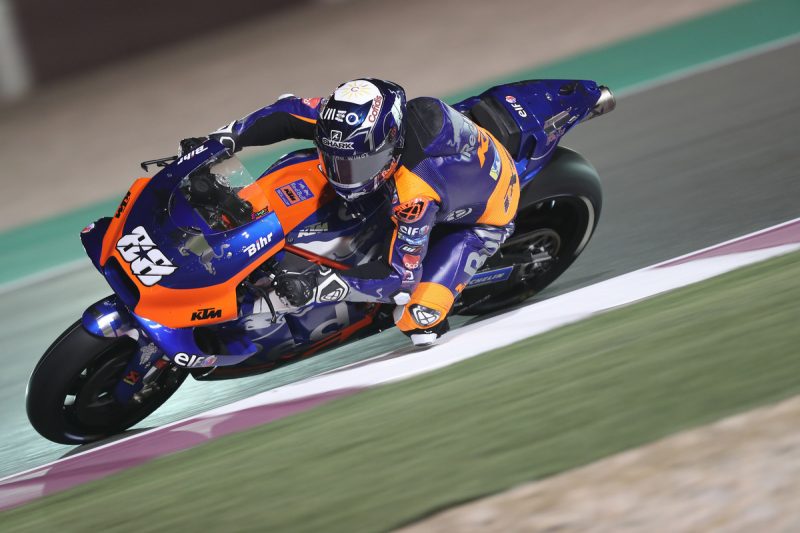 One difficult part of the job must be dealing with young riders. As the man with the contracts you are either starting or ending their dreams …
“It is difficult – and also great when you find that special talent – but I have some guys to help me when it comes to spotting the next generation and our strategy there. Aki [Ajo] in particular helps with the next step. When things do not work out with a rider then it’s not the nicest part of the job but that’s when the business side kicks in. You have to make a judgement call about whether a rider is the one for you and should stay part of the family, and subsequently whether the rider himself is putting in the work and has the desire to stay also.”

What are you looking for in a potential GP star?
“It is a big package. The family and the support behind the rider is an important part when they are so young. There should also be a spark in the rider’s face as well: A desire that he really wants to come out on-top. This is sometimes difficult to find and you are not sure if it will be there forever but it mean they show a lot of interest and they are putting in effort when it comes to the bike, the team, the whole structure and looking to what is coming next. A good example – even though he just joined us now for Moto2TM – is Jorge Martín: You can really feel what this guy wants to do and achieve. He has the right mentality.”

It’s quite a responsibility to put a contract to somebody …
“It is. We make the first steps of the future for our brand and our racing activity. You prepare your guy – the one that you hope will be the next star – the best you can and support him through the season and then you look to see if it will work out. Sometimes you pick the right ones, sometimes you don’t. The first goal is to always put a KTM on top – that’s our commitment to the sport – and then you hope it is with the right rider and he is developing well. Sometimes the rider you picked doesn’t improve quite as well as you expected.”

Engineering and technology is important in any motorsport but essential in the MotoGPTM world. Balancing the talent with the technical aspect and getting it all at a high level must be another hard task?
“Yes, staffing is so important. The first thing is to find the right people with the right character and then put them in the right position where they can best help improve the racing program. Again, this is not an area that comes down solely to me and there is a group of people making these decisions about hiring or replacing.” 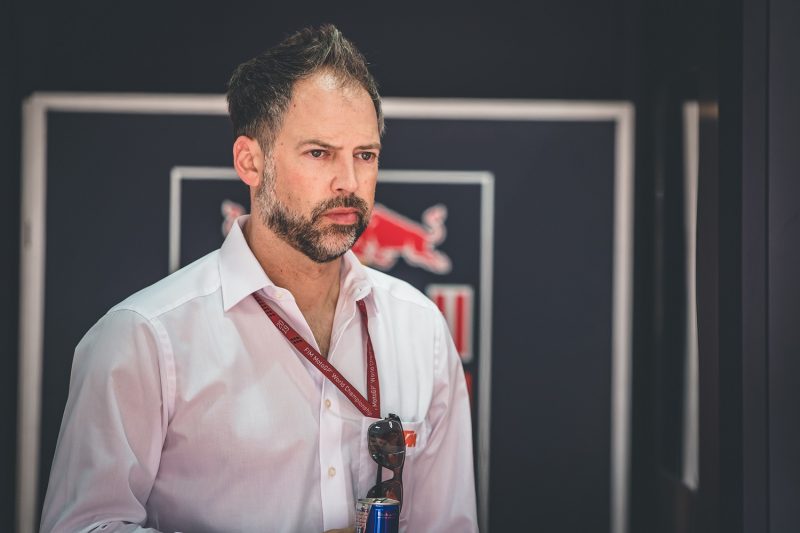 What about some fun parts of the job?
“Apart from the results then there are other memorable moments. Like the very first roll out with Pol and Bradley [Smith] at the end of 2016 when they hopped on the KTM RC16 for the first time in Valencia: To see their faces and hear their first comments was something I’ll never forget. There has been a lot of ‘firsts’ with this project. I know it is ‘connected’ to a result but the first MotoGPTM podium in Valencia was really emotional: Again something unforgettable. Overall the job is the best I can have because I combine work with my passion, and I know it is something not many are lucky to say. I also liked working on the KTM structure to go to Supercross in the USA because that was something I was dreaming of when I was a racer. It was a special experience to see and do that.”

How about the future? Is everything set or will you need to analyze and assess what KTM are doing in MotoGPTM?
“You can never sit still and you constantly have to look around and think ‘what can be improved?’ There is usually always a need for small adjustments here and there but I think we are on a good way for the future.”

Lastly: In the office in Munderfing is there a bit of competition with the offroad guys?
“Yes, there is. Sure! Especially after winning in Dakar, Supercross and then the first MXGP. It’s been a good year so far for KTM and now it is MotoGPTM ‘go-time’. There is always a little bit of competition between us.” 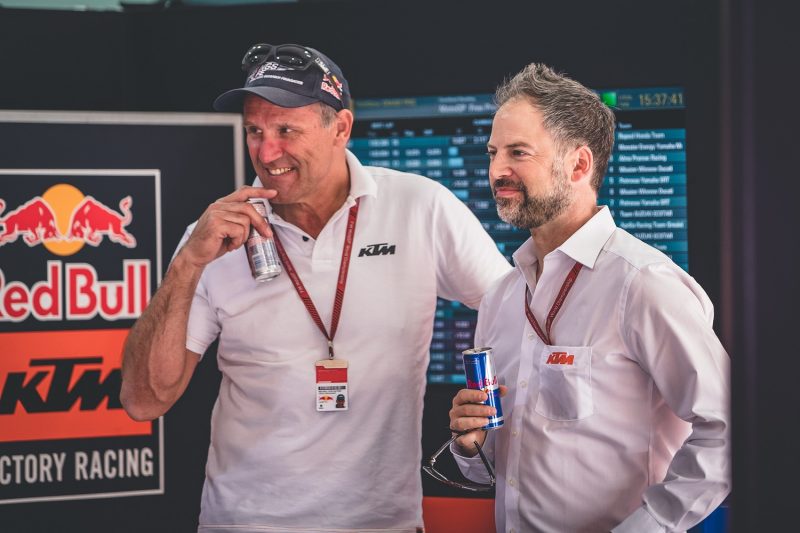 303 Responses to Master of the road: Talking KTM in MotoGP™