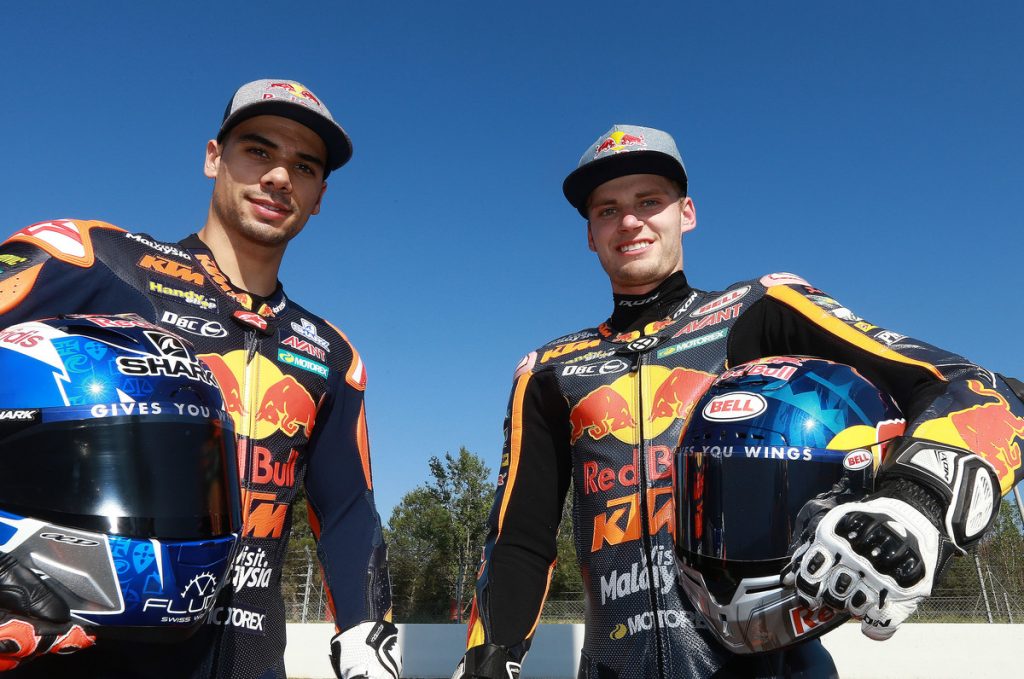 While MotoGPTM routinely hit the headlines for KTM in 2017, the factory’s intermediate class efforts were going quietly understated. That axis shifted at Phillip Island, Sepang and Valencia. In the last three rounds of the season, Miguel Oliveira won three consecutive times with Brad Binder joining him on the podium in the Moto2 category. The rate of evolution and results not only made the WP Performance Systems-framed machine the most successful from KTM’s assault on the asphalt this year but also one of the most vital in completing the KTM ladder. Oliveira was third in the championship with nine trophies overall. 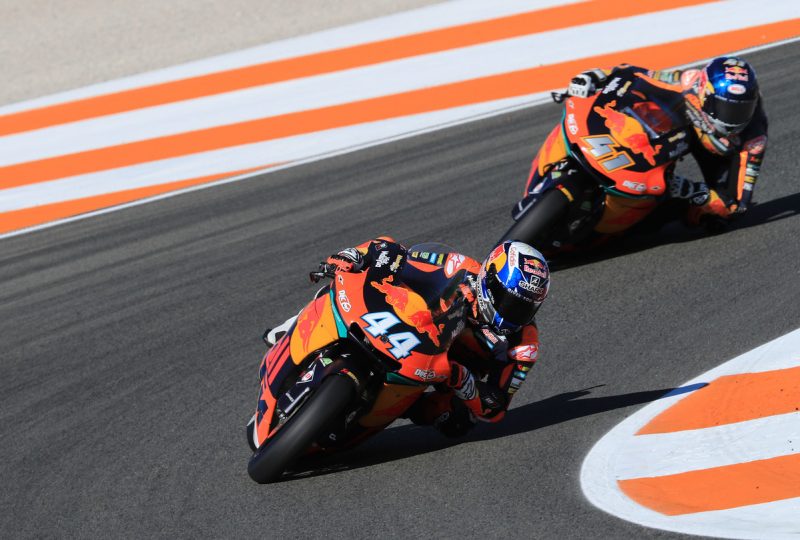 In a sense, Moto2 was an even bigger mountain for the KTM AG than their cousins in MotoGPTM: two relative rookies to the class with the Portuguese and South African and a brand new chassis and knowledge and management of Dunlop tires with the standard 600cc powerplant. It was quite a curve to negotiate. MotoGPTM was a big and entirely new concept but the team was armed with experienced riders and staff. Moto2? Take a card from the deck.

Challenging the might of Kalex – the brand had the nine first riders in the final 2016 ranking – was already a hefty task but the WP technicians both for chassis and suspension setup had their ideas for maximizing traction and reducing wear. Then it was down to the riders, and both Moto3 world champ Binder (desperately trying to recover fitness and confidence from a broken left arm that required three further procedures) and Oliveira, one of the smartest riders on the grid, gathered pace quickly. 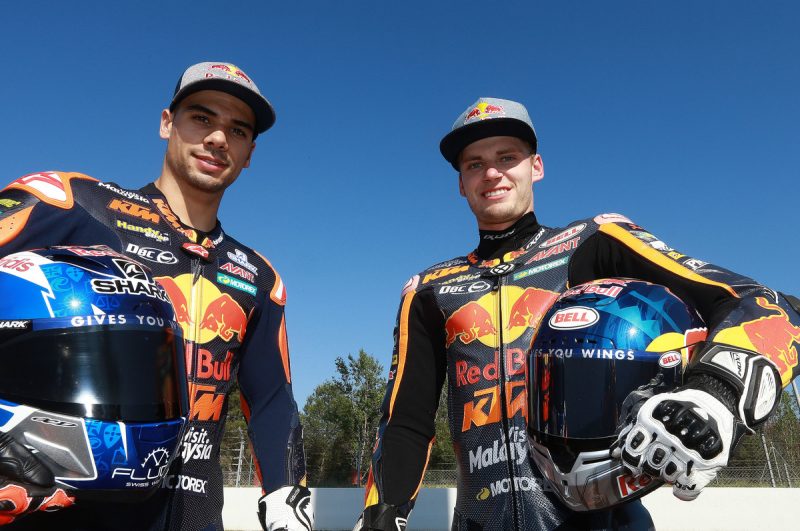 “To think back to where I started in Qatar – 20th and something like forty seconds from the leader – and to be on the podium for the last three races is an incredible feeling,” said a relieved Binder at Valencia. “We made great progress this year and every time I’m on the bike I am learning something new. I want to keep the structure we have and keep chipping away every weekend.”

“We tested a lot throughout the season – like many teams – and got new material but we found out that the actual [base] bike is quite good,” says Miguel. “The only upgrade we really made was something to the front fairing for the hands. That was basically it! We lacked speed in the first races and we struggled to understand new tires with a lot of fuel, chatter and vibration and at the end of the race. We were going all over the bike, up-and-down-back-and-forward to understand what to do. By the end of the season – even before – I could have won a race but it never happened. I was [then] curious by the fact that when I won Brad came second or third. It was quite alarming for everyone else and for them to say ‘KTM has something we don’t … ’ but, through riding with the other guys on the track, I feel we have a competitive bike and not superior to others.”

“The bike has not changed so much since the beginning of the season,” affirms Binder of a contest that enforces technical parity. “What I have noticed in the last few races is that we have played with the setup and we end up going back to our base setting. When Miguel started to win I started to get a lot better as well and it set off a few alarms [for rivals] but it is honestly pretty much the same bike.” 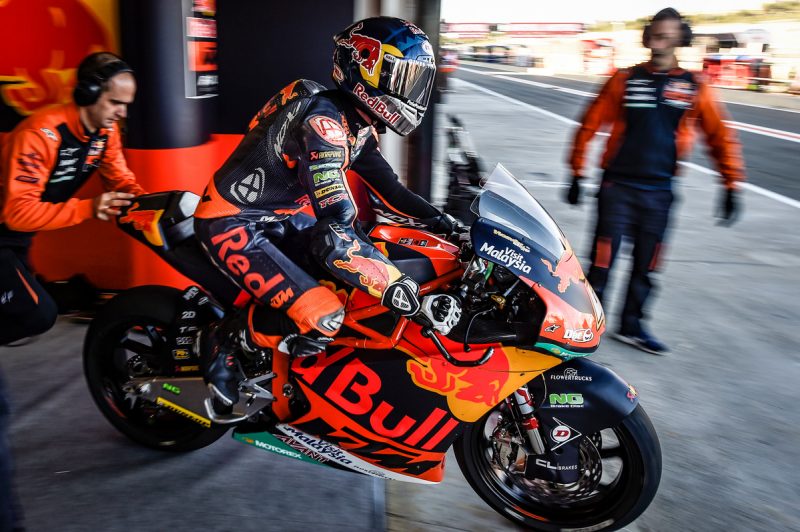 If 2017 confirmed anything then it is KTM’s potency in every class of Grand Prix. Moto3 – by Pit Beirer’s own admission – had been a “disaster” but forces were already in place to improve the package for 2018. Nevertheless, the success of the Red Bull MotoGP Rookies Cup, the proliferation of KTM machinery in Moto3 and the progress of the effort in MotoGPTM to reduce a deficit of 2.5 seconds a lap to the leaders to less than a second was startling. Moto2 filled the gap perfectly by showing that the WP specialists knew their way around a competitive frame and KTM were harboring two more special racers that will be chomping at the bit to try ‘promotion’ to MotoGPTM from 2019 onwards. “The goal of KTM is to fight for the championship in 2018 but not to finish so [far] up this year,” confessed Oliveira. “Like any new project you start it and you don’t know what to expect. You then start to understand the potential sooner or later and this season it happened very soon.”

“For some reason they have found more grip and this is the advantage right now,” said 2017 World Champion Franco Morbidelli after chasing the KTMs at the tail end of the campaign. “The Kalex grips when the tire is new but then there is a drop, not as much as theirs. Miguel has been very fast since the beginning of the year but he made another step since Australia.” 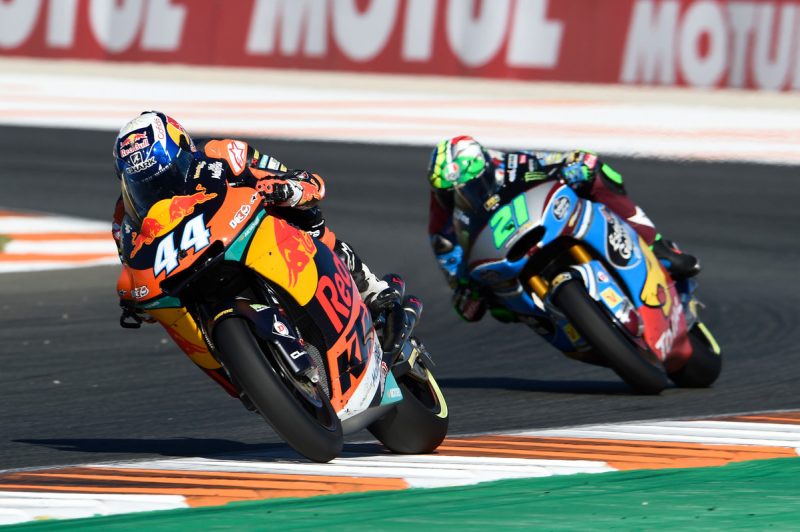 Like they did in Moto3 in 2012, KTM have shown their hand in Moto2 and more hardware could litter the grid very soon as the class faces up to an engine spec change in a year’s time. The rungs in the ladder are in place for the manufacturer to groom special talent all the way through the system.

“We have our own strategy for young riders and since we are now also involved in Moto2 and MotoGPTM the whole story makes sense for us,” says Beirer. “We have been supporting the Rookies Cup for more than ten years now and this develops [racers] for the whole paddock; sometimes we were jealous to grow these riders and not have the chance to use some of them! Now with having a big Moto3 project with fifteen bikes next season and a Moto2 where we can still have contact with our riders then hopefully we can have one of our own rookies on a MotoGPTM bike one day. That is the target of our program.”

“I think like Red Bull has the junior team and top team in Formula 1 it would be a goal for them to do it in MotoGPTM [so you could] have two years of understanding how it works,” Oliveira muses. “We are linked in that direction even if there is another department in KTM taking care of the Moto2 project which is WP. Everything is basically connected. It feels ‘safe’ to be in this project because you could end up there [MotoGPTM].”

“I feel lucky to have arrived in the Red Bull KTM at the time I did,” says Binder. “With doing well last year in Moto3 and opening up the team here in Moto2 it made the perfect stepping stone for me. It is awesome because you end up having the same people around you more or less. It’s a real family atmosphere and makes coming to the track an absolute pleasure and the hard days a lot easier.” 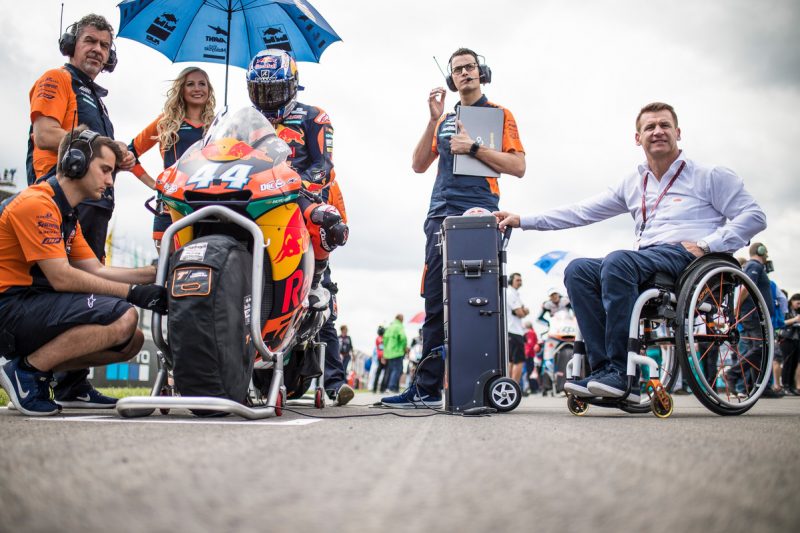 While Beirer again reiterated his message at Valencia that KTM’s racing department will not ease-off none of the other disciplines like Motocross, Supercross, Enduro and Rally where they have reaped victory and spoils (“not 1%” assured the German) there is little doubting the scope and skills that have made road racing bigger and stronger than ever within the halls of the workshop at Munderfing. It slightly boggles the mind where the factory can go next.

66 Responses to Moto2 is coming: The completion of the KTM ‘scale’ to the top of MotoGP™