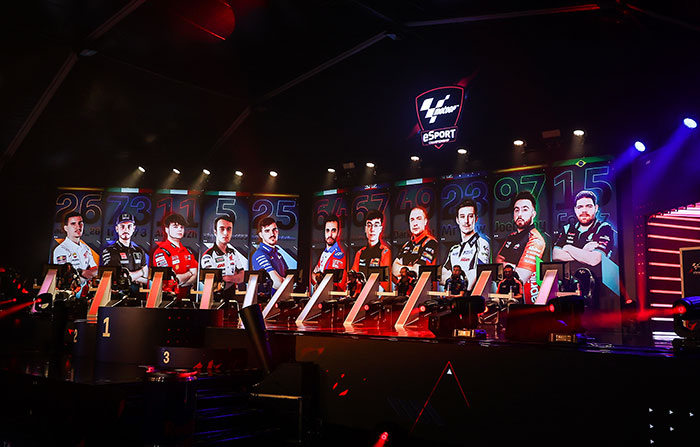 MOTOGP™ ESPORTS: GETTING CLOSER TO THE EXCITEMENT OF THE REAL THING?

The final round of 2021 MotoGP™ at Valencia also staged the MotoGP eSports Global Series finale as the fastest gamers gathered for the biggest and best prize yet. Is the show getting more and more prominent? We went along to the spectacle at the Ricardo Tormo Circuit to find out…

The eighteenth and last round of MotoGP™ welcomed back a sizeable quota of public and saw more than 75,000 finding space to watch Valentino Rossi bid farewell to the championship and Red Bull KTM Ajo celebrate both Moto2™ and Moto3™ titles. Before Sunday’s races there is a decent throng of fans around the eSports hub to conclude the ‘digital’ version of 2021 MotoGP on Friday evening.

The venue for the Global Series finale is a plain white, raised marquee with a small logo above the door, located in the middle of the fan area at Valencia. Inside the marquee the aspect is much different. A large stage houses the game ‘pods’ where the finalists will sit and race (sadly they are hidden from view for most of the audience). Racks of multi-coloured lights swirl around, screens beam graphics and action from all sides. The walls are lined with black drapes, giving the space a performance-venue feeling. At the front of an auditorium area that sits almost a hundred people and adjacent to the ‘podium’ is the grand prize: a BMW X4 costing 80,000 euros and the biggest incentive yet in the fledgling history of MotoGP eSports.

The gamers are introduced, and some are enthusiastically cheered by representation from the MotoGP teams. There are bosses and riders (Jack Miller, Alex Rins, Luca Marini, Deniz Öncü) in the audience. KTM count on Italian ‘DarkBright’ and Brit ‘JackHammer4658’ to steer the digital RC16s of Tech3 KTM Factory Racing and Red Bull KTM Factory Racing respectively. Neither are in the running for the title, but Hammer would have an important say in the final result.

What is MotoGP eSports? Well, using the official game created by developers Milestone and a title that has been tweaked, refined and advanced in the ten years that the Italian company has had the licence, aspiring gamers from all corners of the world can apply to make it through the Pro Draft (using Xbox, PlayStation or PC). This series of 4 challenges will filter the best players. The MotoGP teams will then choose their 11 contenders for the Global Series and a calendar of double-header GPs with the results counting towards the final standings: just like the real thing. The virtual ‘Grands Prix’ were set to take place at actual MotoGP events but, due to the pandemic, Valencia is the first time the racers have gathered.

The Global Series Final see the 11 participants compete in two sprints (no more than 10 laps) around the Circuit of the Americas and the Ricardo Tormo. The races are built-up through live commentary and the whole affair is streamed live on YouTube and Facebook. The audience at Valencia watch the action through the large screens behind the gamers where the camera angles alternate between TV-style external views and the rider’s/gamer’s perspective. The game looks stunning. It is easy to detect that we’re not watching real MotoGP through the external, trackside views because of the phoney bike dynamics but for perspectives like the onboard dashboard camera facing the rider then the lighting is deceptively brilliant. The fact that the gamers can have their own customization on helmets and gear while racing as, say, Brad Binder, is even more impressive. It’s hard to remember when the line between real and virtual has ever been so blurred.

The highlight of the two dashes is the last lap fight between JackHammer4658 and the reigning champion Adriaan_26 (riding a Repsol Honda) at COTA. The latter needed to recover from an early fall to stay in contention and Hammer’s KTM was resistant until the final two corners. The close contest and the stakes involved momentarily suspend belief: this is exciting sport. The riders ‘crash’ and are circulating within tenths of a second of each other. This helps the spectators respect the fact that these are competitors with evident skill. The setting and the repercussions of their performances adds tension.

By the time of the second checkered flag there is a mixture of joy and relief for Italian Trast73 – the winner in 2017 and 2018 – as he holds on to claim the championship, the car and the applause.

MotoGP eSports is now in its fifth edition and is trying to tap into a movement that is growing massively both commercially and in terms of user interest and engagement. MotoGP eSports content was already attracting over 16 million views in 2020 and more than 2.5 million acts of engagement. These totals should increase even more in 2021 and continue on an upward trajectory.

“From its creation the MotoGP eSports Championship has been growing considerably year upon year both in terms of participants and the level of audiences,” Senior Director of Global Commercial Partnerships, Marc Saurina tells us. “With some very young audiences (50% between 14-24 years) eSports has become a perfect platform to introduce new generations to the MotoGP scene and capture their interest. A marker of the growth can be seen in the social networks around MotoGP eSports: they keep expanding and in terms of following it has become the third biggest property for Dorna, only behind MotoGP and WorldSBK. In terms of business, it is not only a way to offer new and different content to current MotoGP sponsors but also a means to attract new brands to the MotoGP world.”

The Final in Valencia brings an important and tangible connection between MotoGP the sport and MotoGP the eSport. This isn’t some panorama hidden away through an ethernet cable, dark bedrooms and living rooms. Promoters Dorna Sports have brought decent production values to a physical event like the Global Series Finaly to give even more credibility.

“When Dorna decided to organise the first MotoGP eSports Championship we saw that staging the events at a circuit and during a Grand Prix was important to consolidate and grow visibility of the competition,” confirms Saurina. “Combining both series gives us a great opportunity to organise sponsor promotions, TV production, MotoGP rider appearances. It also allows us to interact directly with race fans, especially the younger generation.”

Trast73 is in his late twenties, JackHammer4658 has yet to break his twenties. ‘MrTftw’ travelled from Australia to Valencia to compete. MotoGP eSports is winning interest and encouraging gamers to get serious and get professional. Add the sense of occasion at Valencia, the tension, pre-race nerves and celebration of the final podium finishers then eSports is edging nearer to the real racing than we might expect.

13 Responses to MOTOGP™ ESPORTS: GETTING CLOSER TO THE EXCITEMENT OF THE REAL THING?