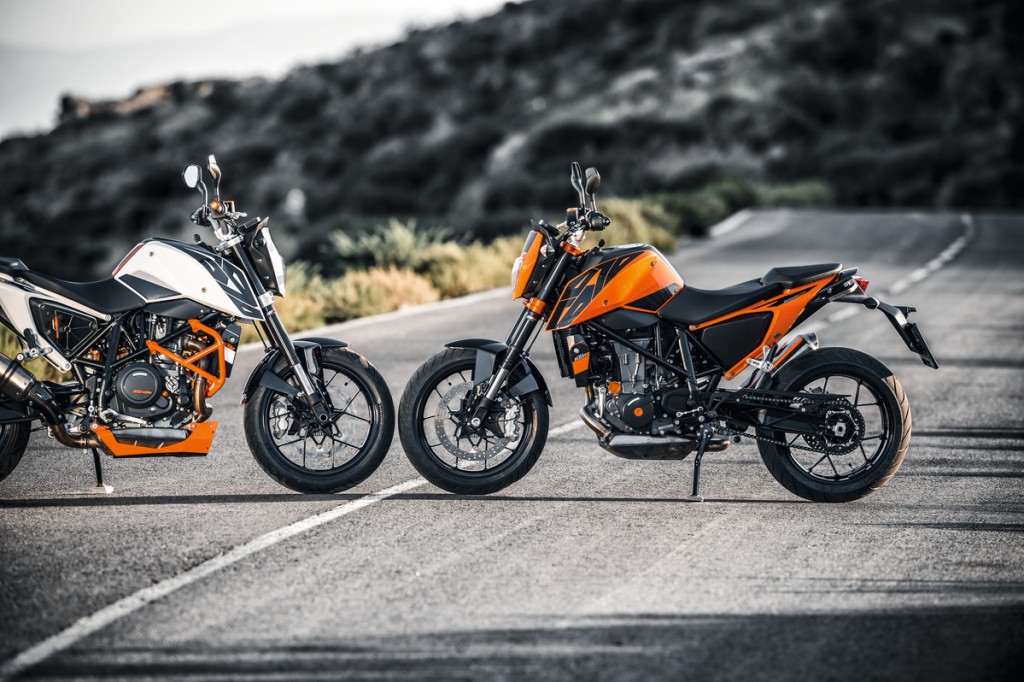 Only a matter of weeks before they hit showrooms and dealer floors the new KTM 690 DUKE and KTM 690 DUKE R tore up some of the scenic mountain roads in Gran Canaria this week as a gathering of media from across the continents gave their verdict on the new LC4 propelled bikes. 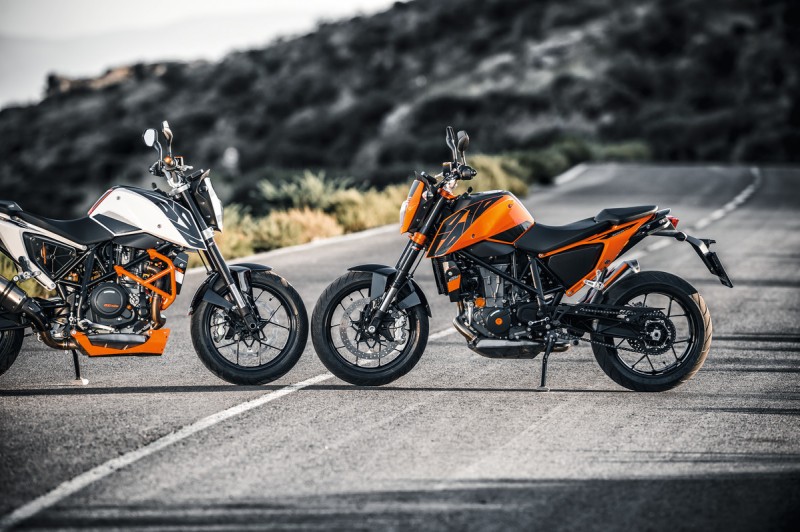 KTM BLOG was also welcomed to the idyllic surroundings at the Sheraton Golf Resort where the dedicated and hard-working KTM launch crew were stationed with 45 fresh DUKEs and a mantra that the latest double-barrelled generation of the 690 DUKE is once more a force to be reckoned with.

We had a go at capturing some GoPro footage from our stay in the ‘Canaries’ where pleasant 20+ temperatures made for some inviting riding conditions and a blast around the beach-set Circuito de Maspalomas (best lap-time on the 690 DUKE R hovering around the 1min 09secs mark … not ours we hasten to add).

We featured some of the key selling points of the 690 DUKEs after the bikes’ official unveiling at the EICMA show in Milan two weeks ago but Gran Canaria was the first time to really check out what all the fuss was about. In three concise points then here is what impressed us about KTM’s latest (and greatest?) DUKE …

Engine echoes
Over 20,000 hours of work and manpower went into the rejigged LC4 and like a blossoming boxer the engine has trimmed weight (the 2mm thick magnesium cylinder head cover is innovative stuff) and added punching power. The output-weight ratio is good enough for a knockout, and KTM know that when it comes to competition in the segment the light single will leave many other machines giddy. Two words come to mind when riding the 690: ‘Easy’ and ‘Torque’. Like the KTM 1290 SUPER DUKE R this bike just wants to pull, pull and pull and the engine development team were quick to credit the role that the electronics (Traction Control and Motor Slip Regulation, Ride-by-Wire and Ride Mode Technology – Sport, Street and Rain) add to the finesse of the motor and smooth out the whole experience. The 73hp is there on tap and a delightful spread in third gear means this is makes riding a motorcycle almost a no-brainer. 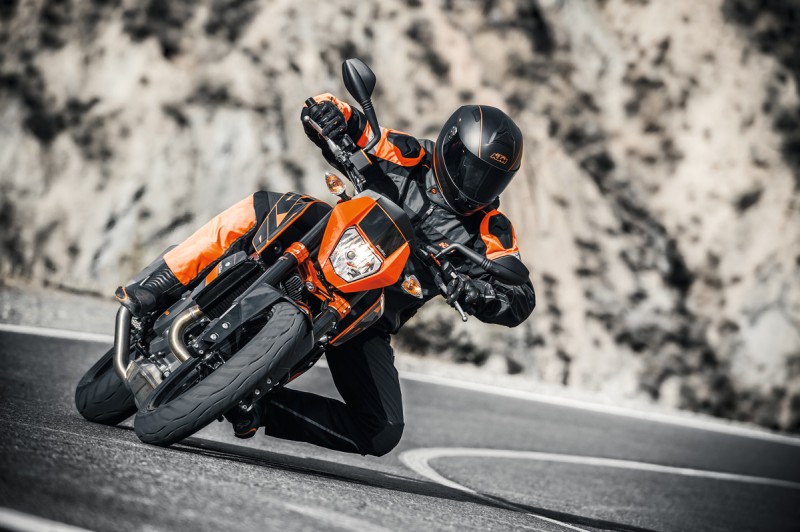 Happy bums
The last version of the 690 DUKE featured a central and ‘submerged’ position that allowed you to throw around and explore the agility of the bike with ease. It wasn’t the most comfortable for long outings though, especially for taller riders. The 2016 690 DUKE has a narrower profile saddle that makes sliding back and easing into more of a relaxed ‘touring’ position far more simple. In fact it is one of the more noticeable elements through spending an extended amount of time on the bike, so full credit for KTM and KISKA for working diligently on this aspect. There are a number of other small details. An honourable mention for the TFT (thin film transistor) display that is seriously future-thinking from KTM and couldn’t be easier to read; loved the way the ‘tablet style’ screen also automatically switched brightness going through a tunnel and it must be equally as effective riding at night. Styling? The graphics don’t alter the KTM flavor too much and this is unmistakably a prominent member of the DUKE family but things like the four kilo aluminium ‘lattice’ swingarm is almost a work of art. 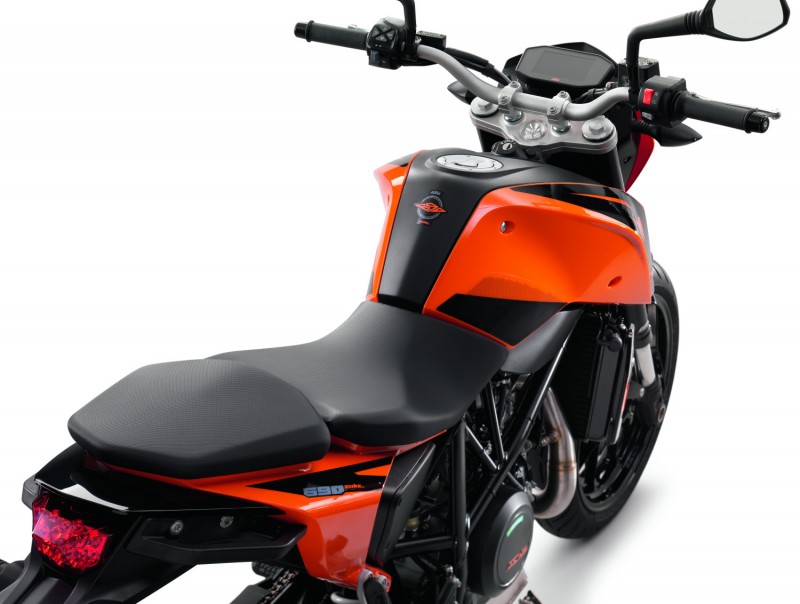 Oh R!
Previous incarnations of the 690 DUKE could be lent that custom touch thanks to a flexible credit card and the latest edition of the KTM PowerParts catalog. For 2016 KTM decided to extend their READY TO RACE DNA (the slogan even pops up on the TFT when the key is turned in the ignition) more resoundingly to the 690 with the ‘R’. A series of modifications such WP suspension, exhaust, brakes and other aesthetics help mark this as the ‘dark’ side of the 690 DUKE; the cheeky devil on the shoulder. On the road the altered footpeg and riding position means a sporty fit right-away and it can get tiresome unless you are in ‘attack’ mode. At the short and pacey Maspalomas race track the bike comes into its own with the Akrapovič titanium slip-on chucking a few more horses on the asphalt and that aggressive and entirely appropriate stance on the bike helping inspire some confidence for the higher speeds. The Brembos were exemplary. It felt like hovering a finger near the lever pulled the R back into shape with the bespoke radial master cylinder and a high-end M50 Monoblock caliper more than up to the task. The brakes were also fantastic on the standard 690 and substantiate KTM’s claims that the 690 DUKE is a much a safer motorcycle as it is revitalized, essential and ultimately a blast. 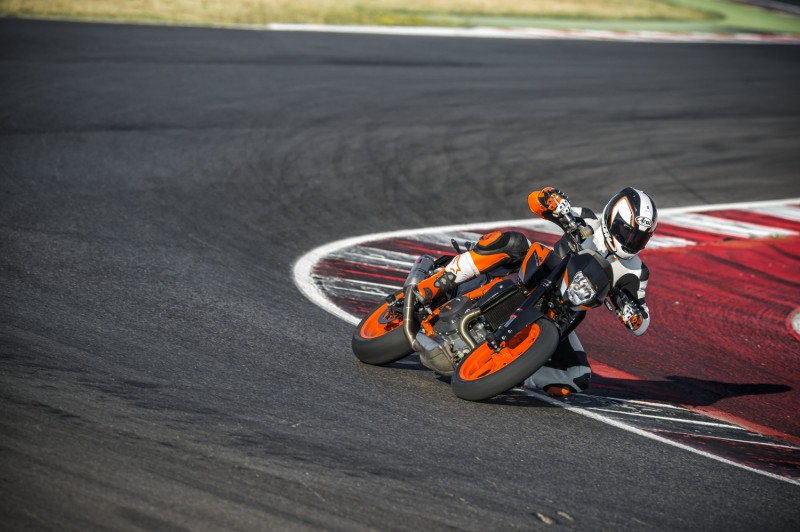