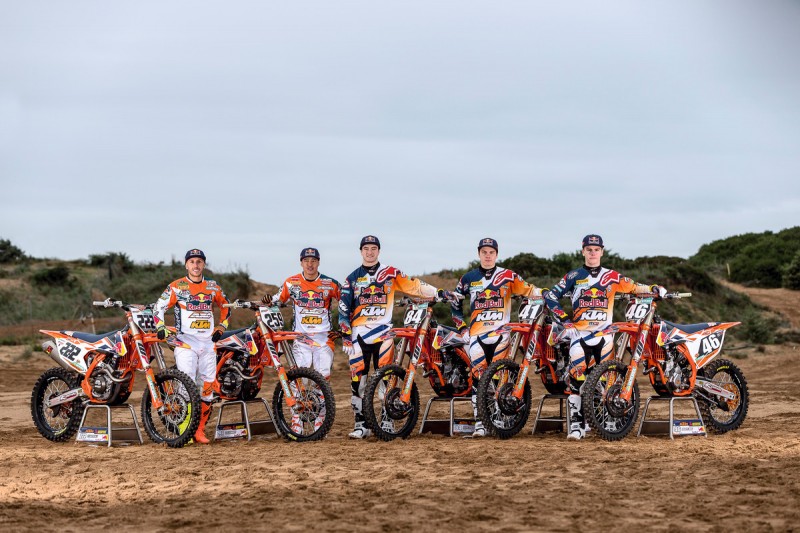 1. Does Tony Cairoli have what it takes to regain his crown?
2016 presents an unusual situation for the 30 year old Sicilian and MXGP’s ‘Valentino Rossi’ both in terms of appeal, success, longevity and star power. Since coming into the premier MXGP class in 2009 as a two-time MX2 World Champion, Cairoli has not yet started a Grand Prix year without the gold plate as reigning number one. Tony ruled MXGP from 2009 to an injury-hit 2015 and thus is not the ‘big target’ with the launch of the forthcoming campaign.

After such a long trawl of titles and acclaim and arguably reaching the teetering point of his peak in the sport, fans could be forgiven for questioning whether Cairoli still has the desire and the physicality to – again – take on the likes of new champ Romain Febvre (six years his junior) and other talents like Gautier Paulin, Jeremy Van Horebeek, Evgeny Bobryshev, Clement Desalle, Kevin Strijbos, Shaun Simpson, Tommy Searle and new teammate Glenn Coldenhoff (recently turned 25).

Doubts over his significance and potency in MXGP were answered last week with a fresh three-year contract with Red Bull KTM. The deal theoretically means that Cairoli will end his career with the team and in the Claudio De Carli-run set-up that has delivered so many spoils since the Italians first hooked-up in 2004. Testing with the KTM 450 SX-F started with the last Grand Prix of 2015 meaning that Cairoli has had the better part of five months to think about and glean the bigger bike to his liking after such as emphatic combination with the KTM 350 SX-F from 2010 to 2014. Then there is also the history book. While Stefan Everts’ career GP win total of 101 could still be caught (Cairoli is on 74) the Belgian’s haul of ten titles is firmly in view with Cairoli sitting pretty on eight crowns and just two away from genuine greatness in the annals of the sport. 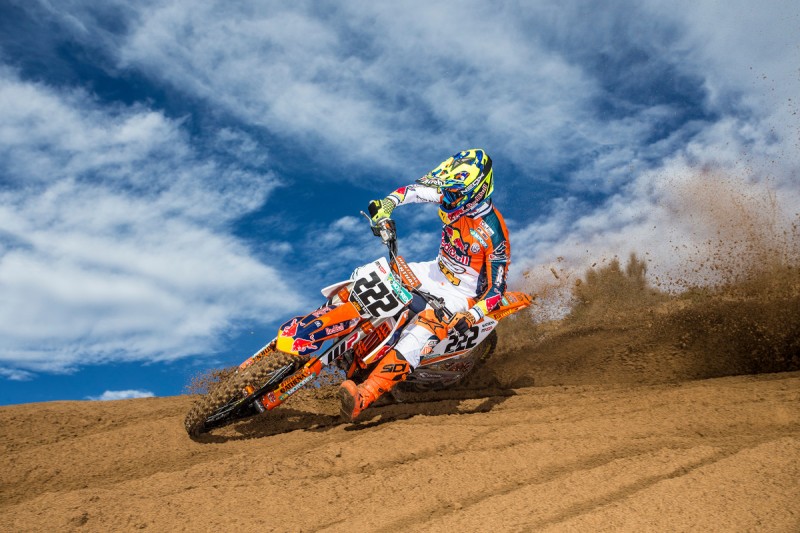 Cairoli has shown that he is a tenacious and reactive racer. The flamboyant and playful athlete of the MX2 years hardened into a multi-skilled, aware and smart competitor that accumulated podium finishes for fun. When the odds go against the ‘222’ he has more than displayed an appetite for a fightback. He defied a fractured left arm last season to contest a further three Grands Prix before the injury overwhelmed him. He has coped with family bereavements to still succeed. In 2012 a double DNF in the ooze of the Grand Prix of Sweden saw TC lose the championship lead but then fire back immediately with 13 wins from the next 14 motos. He heads to Qatar having dealt with a pre-season setback of two broken ribs but insists he is ready to play.

Considering his track record for consistency and staying power only a fool would bet against Tony having a major part to play in the 2016 championship story. He is now the hunter instead of the prey which could see a fresh attacking dimension to his racing, he has had ample time on the KTM 450 SX-F to make the bike his (instead of trying to acclimatize while racing as in 2015) and has a settled home at Red Bull KTM. Febvre was brilliant in 2015 but this year could see the very best of Cairoli.

2. Will this be Jeffrey Herlings last year in MX2? And will he win a third title?
Most certainly ‘yes’ and then ‘who knows?’ Now 21 years old, Herlings is becoming one of the elder statesmen of the category since bursting onto the scene (a podium in his second GP and a win in his third) as a fifteen year old in 2010. A Red Bull KTM stalwart, two titles in the bag (2012 and 2013) and a further two sensationally lost through shock season-ending injuries (2014-2015), a remarkable seven year unbeaten streak at his home Grand Prix and undoubtedly the fastest rider in the sand anywhere in the world: Herlings is one of MXGP’s biggest stars. Understandably the Dutchman hedged his bets again on the KTM 250 SX-F for 2016 in a bid to regain some confidence and dominance after the character-shaking experiences of the past two seasons. Jeffrey is in MX2 this year to rediscover some of the invincibility from 2012 and 2013 (it wasn’t so long ago that he was talking about the “perfect season”) to further boost those win statistics and to build momentum for a jump into MXGP for 2017 where he will again wear Red Bull KTM colors.

For his MX2 goal this term so far the signs are promising. For the first time since 2012 Herlings has had an injury-free winter of preparation. He has tested comprehensively with the KTM 250 SX-F and has swept pre-season races in Italy, UK and France without challenge. Grand Prix fans can expect Herlings to be a class apart in MX2 once more but any title run-in will be nervy. Jeffrey can definitely clean-up (which will certainly dropkick him into MXGP) but knows he needs to control himself just as much as his influence over the chasing pack. 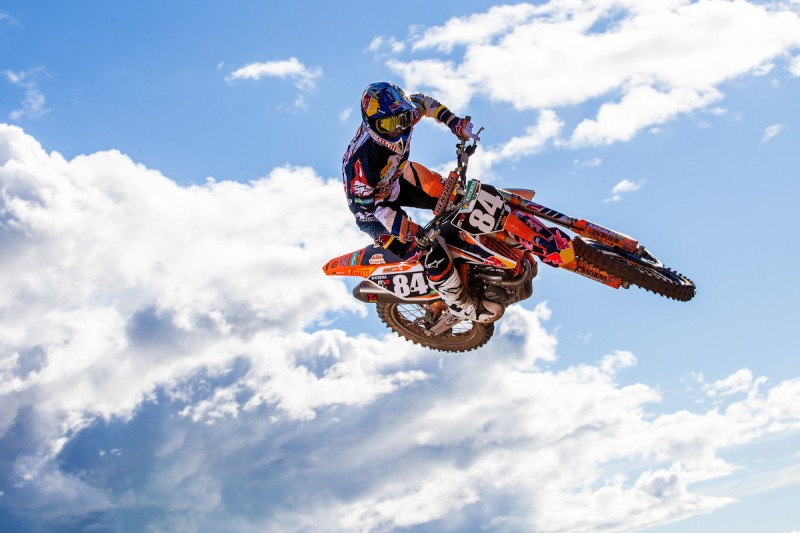 “I realize my rivals will have also done everything to be ready but for the last two years I built up leads of 140+ points in the championship and I think the only thing that can hold me back is injury again … but I have learnt from that,” he said recently.

The MX2 chronicles of 2014 and 2015 show that little can be taken for granted in the category – and Grand Prix racing as a whole – but Herlings is the overwhelming favorite again in the 250 division and if he makes it across the finish line then watch for a mouth-watering MXGP line-up for the KTM crew in 2017. Many believe that even if fate goes against ‘84’ that he will still wave goodbye to MX2; there are bigger fish in the fridge for this exceptional talent.

3. What next for the SX-F line-up?
With 2015 Supercross success (and the AMA Pro National Motocross title) plus Grand Prix wins thanks to Shaun Simpson and a rate of performance that even made Cairoli switch from his trusted KTM 350 SX-F five races into the 2015 MXGP term, the latest generation of the KTM 450 SX-F created a high benchmark on its introduction last year. Less weight, better handling and the most versatile WP suspension synergy yet meant it was the bike to have in the MXGP/450 SX/MX classes. The same technical acumen was applied to the 250 and both Herlings and Pauls Jonass were in contention for the 2015 title. Such were the strides taken by the 2016 motorcycles that the gap over riders running the 2015 versions was quite clear to see and caused some envy in the paddock.

Reflecting on the difference between his 2015 KTM 450 SX-F and the 2016 factory model that he used for the last three rounds of the Grand Prix season, double British Champion Simpson said: “It feels lighter, crisper and with such smooth engine power. We had the set-up working just fine on the 2015 bike but the 2016 felt like it had more to give and was easier to race.” 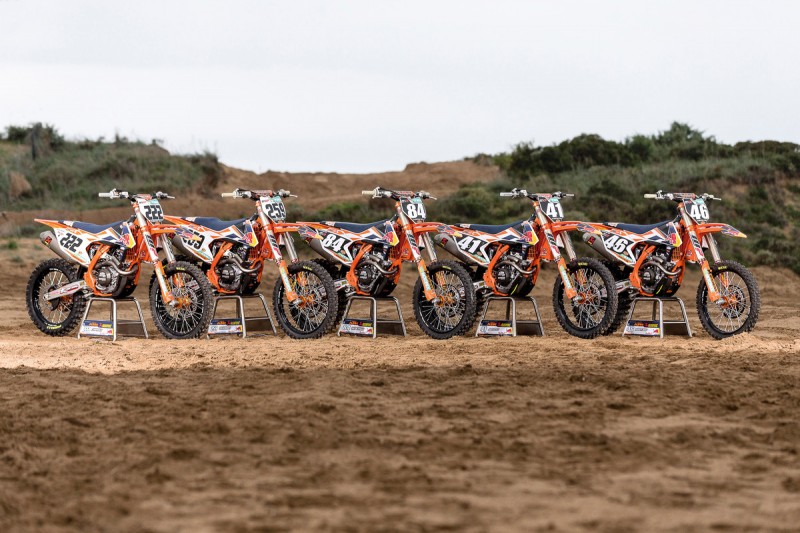 Where can the SX-Fs go? Herlings has already spoken about his testing work over the winter (“we’ve looked at the suspension, chassis, clutch and engine and things can always be improved but I think we have made a lot of progress with the suspension”) while Jonass insists that “the bike hasn’t changed so much; we improved the suspension a lot and some small things but a lot is the same as last year”. Work will quietly continue in the background with WP’s technology (watch out for any appearance of prototype air shocks and forks) and KTM have been pushing to augment their electronics package, something that Cairoli was already testing towards the end of 2015. New MXGP recruit Glenn Coldenhoff can bring some of his experience after a debut year in the premier class with a works Suzuki in 2015 and it will be curious to see how the Dutchman re-adapts to the SX-F after he used an orange 250 to take his first career victory in MX2 back in 2013.

Heading further back to the drawing board Kiska’s Lead Designer Craig Dent – who oversaw some of the key looks and functions of the 2016 SX range – recently said that there was still some mileage for ideas and creativity when it comes to KTM’s dirt bikes. “We are already working on the next generation,” the Brit said. “Like the race teams who are ‘on it’ every day and every week we were also straight onto the next one once the 2016 bike was finalized. We looked at some of the opportunities we might have missed. For us the 2016 bikes are totally optimized but, as with everything in life, things move on. Maxime Thouvenin [co-designer] spent two weeks out in the U.S. just recently with Roger De Coster and the SX team as well as in Europe with the MXGP guys. He came back with a notebook full of ideas. When he turned up with this book I thought ‘here we go again’.”

Lastly, what of the KTM 350 SX-F? Cairoli and Coldenhoff will be steering the bike’s bigger brother in MXGP this season, which means for the first time since its launch in 2010 the 350 stays in the shadows in terms of official factory representation. It could be a brief respite for the five-time title winner with KTM though … one can barely imagine a better steed for Jeffrey Herlings in 2017 …