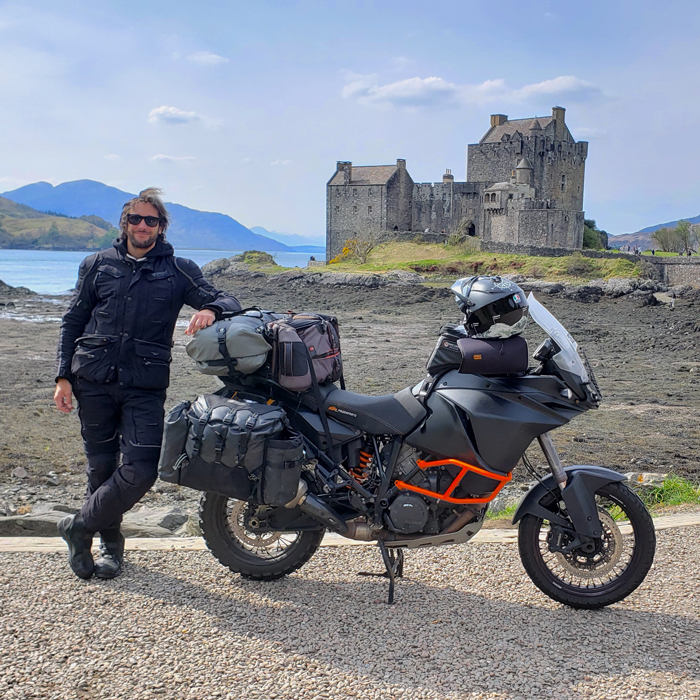 MY TOP 5 PLACES TO RIDE A BIKE ACROSS THE GLOBE

If bikers get their adrenaline rush by exploring new paths and pushing beyond limits, for me the effort to quench the endless thirst for adventure saw me cross more than 40 countries while clocking 200,000 km aboard my KTM 1190 ADVENTURE over the past six years. Across four continents and after many border crossings, here’s five of my best places to ride a bike in this world.

In many ways, all of us Adventure riders are the new generation of explorers. The world is our playground, ready to be discovered, and our bikes our trustworthy steeds. We get our adrenaline rush by exploring new paths, by adventuring through dangers, by pushing our limits, in search of the perfect ride.

After loads and loads of hours spent on the saddle, it’s hard to pinpoint which one was the best ride for me. There have been so many great adventures on my KTM, so it’s impossible to simply choose one. Thus, here are my five favorites:

No doubt, this is probably one of the most famous roads in the world for bikers. Ruta 7 or Carretera Austral is a 1,300 km stretch of road that goes from Puerto Montt to Villa O’Higgins, in the very south part of Chile. This track is basically a paradise for any Adventure rider or photographer. The road is 50% paved and 50% gravel, perfectly doable with a fully loaded motorcycle and a set of 70/30 tires.

What makes this road unique, and probably one of the most spectacular in the world, is the fact that it stretches right in the middle of the beautiful fjords of Patagonia and the majestic Andes, peaking over 5,000 m above sea level. When I got to ride this amazing piece of land on earth, it was autumn and, despite the sometimes-freezing temperatures, the colors were incredible.

That was probably the best natural spectacle I’ve witnessed in my life. Snow peaked mountains, trees in shades of red, orange and bright yellow, turquoise lakes and the most lavish green vegetation. The dangers in this part of the world are mostly related to two factors; first the weather conditions that could become quite extreme, and also the sketchy oncoming traffic. Being directly on the coast, the road gets often quite narrow and wet too. Regardless, Carretera Austral is an absolute must for all bikers.

This national park sits in between San Pedro de Atacama, Chile, and the famous Salar de Uyuni, Bolivia, the largest salt flat in the world. The park is absolutely unique and became quite popular between tourists for its colorful lagoons.

There are mainly two issues to overcome while riding through EANP on a bike: one is fuel – no gas station for more than 500 km – and second is the altitude. The park sits at 4,500 m so breathing and sleeping become difficult. I remember I started panicking at a certain point because I was running low on fuel and I wasn’t even at the halfway point. With low oxygen levels and the panicking, my riding was consequently compromised. Even with the extra gallon of fuel I had with me, I realized I wouldn’t have been able to reach Uyuni.

It started to get late and I got lost few times, as there are no clear roads or signs to follow. When I was at the halfway point, right near the red Lagoon, I only had 50 km range left in my tank; the freezing winds and the altitude were already wearing me down (at night it gets easily -10°C). Luckily a 4×4 filled with tourists passed by and I was able to buy 10 more liters of fuel from them. They also pointed me to a hut nearby where I could spend the night, sheltered from the winds. What an adventure! Hands down this is probably one of the most spectacular and challenging places on the planet to ride motorcycles.

This road, that goes from the small town of San Luis, behind the 5,300 m high mountains of the Huascaran National Park, to the infamous Cañon del Pato, is somehow my favorite in the whole Peru. The riding through the NP is rough for its climates and terrain, as it easily reaches over 4,000 m above sea level. The climb up to the pass is rather challenging but absolutely magical, culminating at the top of the mountain, overlooking the mind-blowing canyon filled with turquoise lagoons.

Once reached the valley, the offroad section ends and the fun begins. This part is known for the infamous Cañon del Pat Road, a two-way road the width of a small car, with pitch black tunnels, carved inside the mountains, and 80m canyon with no barrier on one side. The thrilling factor comes from the sketchy tarmac, with chunks missing on the cliff side.

What was shocking for me was the speed of oncoming traffic, which were mostly mining trucks and locals, driving their vehicles like maniacs on such sketchy road. Needless to say that I got close so many times to a head-on collision and to fall into the canyon. This is, without a doubt, one of those roads you don’t want to talk to your mom about.

On the old continent there are many roads that are worth a mention. Every country has its long list of mountain passes, coastal roads or sketchy offroad tracks with incredible views. But I believe that somehow Scotland deserves to enter this list for many reasons. First of all for the uniqueness of its 500 miles of incredible coastal road. Secondly for the fact that it’s one of the few countries in Europe that allows free camping.

NC 500 is somehow famous also for its unpredictable weather and its strong winds. Also, the roads can become very narrow and with barely any safety net on both sides. Head-on collisions are quite frequent since lots of campers and tourists tend to come in this part of the world for leisure or holidays.

I remember being completely mesmerized by riding through the beautiful Scottish Highlands, gazing at ancient medieval castles, nestled in pristine fjords – the famous ‘lochs’. It truly felt like going back in those times when knights and swords used to rule the lands. Those mystical hills and freezing waters made men and women tough. And riders humble and proud.

It’s no secret that Australia has a special place in my heart, since my trip around the world by motorcycle started from there. I rode around the whole continent and indeed there have been many highlights, like Tasmania – the motorcycle lovers’ destination.

Being mostly a flat and inhospitable island, the adventurous part of riding down under comes from unconventional sources. The most adventurous ride I had was through the famous Gibb River Road. This part of Western Australia, called Kimberley, is one of the most remote of the whole continent. The challenging part comes from being comfortable with ourselves. I spend days basically being alone surrounded by nothing but dust.

There’s only one roadhouse in the very middle of the 1,200 km track. The rest is dust, sharp rocks and sand. Temperatures vary between 34°C to 43°C all year long. There are three river crossings to reach the end of it. The rivers are infested with crocodiles and poisonous snakes. The road is popular, for some weird reasons, also for road trains – famous Australian trucks with 4/5 trailers attached – which can lift a red dust cloud that completely obliterates everything that gets struck by it. Not particularly good for motorcyclists, as you can imagine!

The road is mostly made of sharp rocks. When I rode through it, a rock literally sliced my front tubeless tire, snapping two of the steel wires inside of it, after only 120 km. I had to use three tire plugs to fix the puncture and some cable ties to keep the plugs in place.

The world is out there waiting to be explored.

You just have to #GoAdventure!