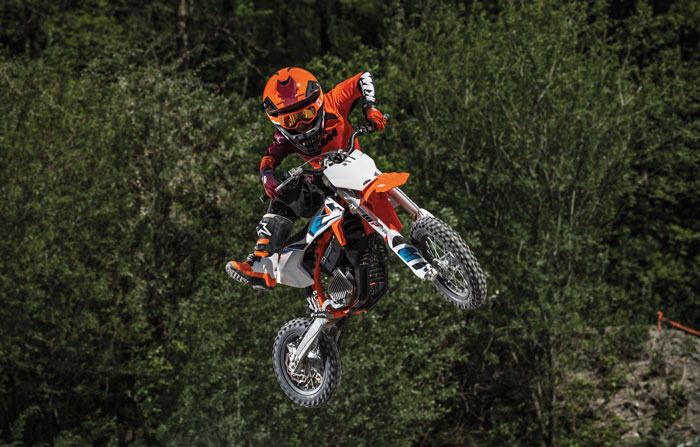 THE NEXT CHAPTER IN KTM´S E-MOBILITY STORY: INTRODUCING THE KTM SX-E 5

KTM announced the launch of its latest model, the KTM SX-E 5 – an electrically powered junior model that’s innovative in design, READY TO RACE in performance and adaptable for the growing rider. The next step in e-mobility, the KTM SX-E 5 may be a great solution for encouraging new families to the sport, whilst offering another option for those who already love, ride and race dirtbikes.

As e-technology evolves, the next generation of riders are certainly likely to become more accustomed to e-powered vehicles in a world that becomes more and more familiar in using this technology. The KTM SX-E 5 not only represents KTM’s next step in e-powered motorcycles, it’s a premium junior product that grows with the rider both when it comes to ability and their size. In fact, one of the major features is that the bike can last a junior approximately five years as the seat height can be adjusted. It requires very little maintenance, just a bit of chain oiling. It makes hardly any noise. It’s easy to operate and it has a bunch of modes for the ability of the rider. Plus, KTM also offers an additional lowering kit so even the smallest riders can start with the bike early on. Pretty cool, eh?

The masterminds behind the development of this project both have children that tested the bike and have been part of the process as the bike evolved. We know that some are skeptical about this kind of technology (without the sound of a motorcycle we’re all accustomed to and love), but when it comes to getting a child on such an adaptable bike from an early age, what’s not to like. Manfred Edlinger from KTM Research and Development, who is responsible for the motocross platform for all KTM SX models, explains: “The bike is so good as it is usable for all skills of all riders.” 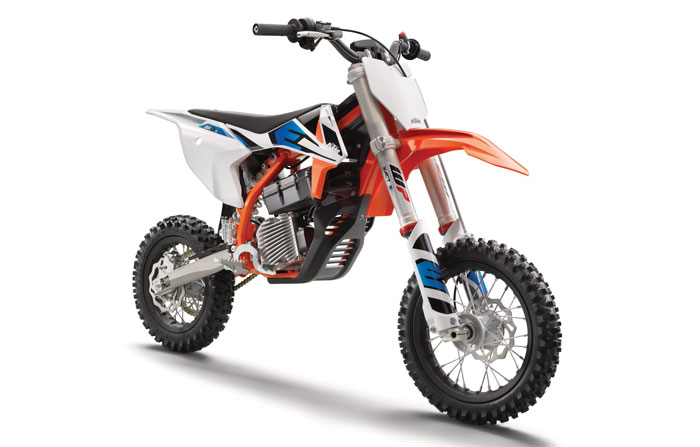 “In my family my daughters were younger than five and with the KTM PowerParts lowering kit they could ride on the kids track right away after a few loops on the grass. Riding like that for the very first time on a motorcycle would absolutely not be possible with a combustion bike that has similar capabilities to a KTM 50 SX. To ride on a track the very first time on the bike is a big benefit. The KTM electric bike is a really complete package – my son that’s almost eight can finish on the podium at a local race, but also the same bike is usable for a four-year-old the very first-time riding,” said Edlinger.

“This bike is so safe – it’s not only a READY TO RACE bike, but it’s also easy to operate. The kids can be quite independent with it, yet with the combustion bike it’s difficult for them to even get it started. If they are able to put on the boots and helmet alone, then they can also pretty much ride on their own. The bike doesn’t get hot, and it’s safer to let the children ride. It’s a completely new type of bike – high performance on the one hand, but also it’s a fun bike for improving skills at more locations. It’s a new era of youth riding.” 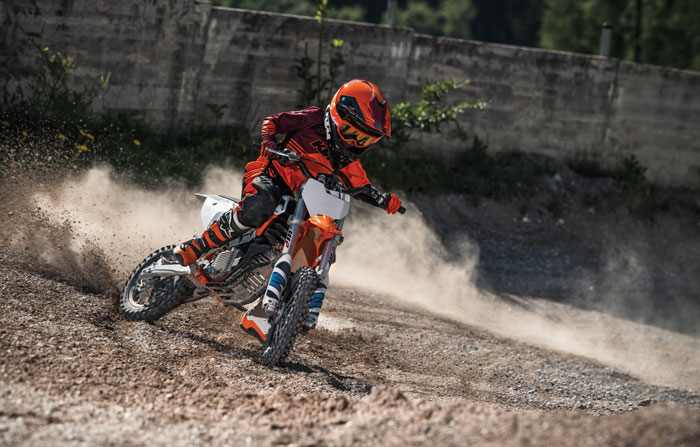 Development for this model has been similar to that of the full-size KTM SX models as raced by some of the best motocross athletes in the world. With comparable lap times to a KTM 50 SX as tested by a national level racer, it provides maximum performance with minimal noise – yet with a lot of other benefits.

“I learned a lot about the advantages of the electric bike just by actually using it, and I have a lot of examples of things that make the bike easier – you can put it in the van without fixings as it can be laid down, when you wash the bike you can see there’s not so much oil around making it easier to clean there’s absolutely no maintenance – just some chain oil and that’s it. Even the tires last a lot longer due to the power delivery. All of this experience aside of the technical features I was able to explore a lot,” said Edlinger. 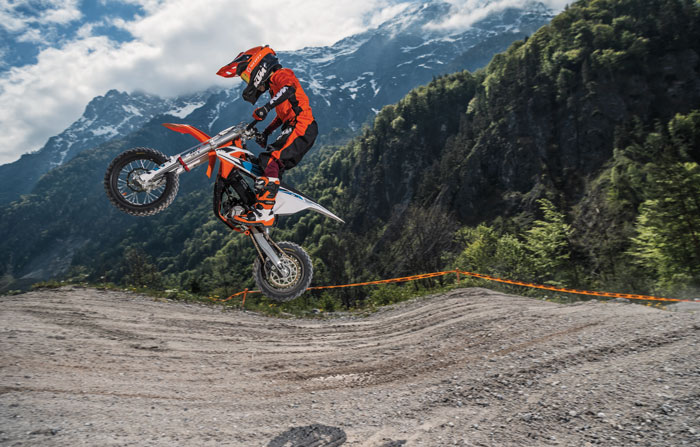 “We did a lot of work on the electric test benches and we had to build benches for this kind of engine and battery. We did a lot of CFD (Computational Fluid Dynamics) calculations along with heat resistance and heat dissipation testing – the ribs on the battery are not just a matter of design, or just by trial and error, this was really developed with modern CFD calculations. We worked on all of the hardware of the chassis completely, using the same development tools as on the big bikes with hydro pulse test benches for the frame and the swingarm. The swingarm is a highlight as it’s a cast aluminum swingarm replacing the steel welded ‘old school’ version we’ve used previously,” concluded Edlinger. 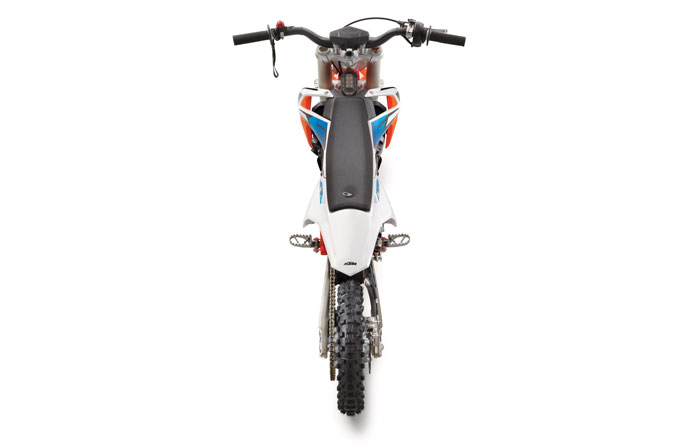 Edlinger’s department worked closely with the dedicated E-mobility team in KTM R&D, which is headed by KTM Head of Electrics/Electronics Arno Ebner. Responsible for developing the motor and incredibly adaptable electronics for the KTM SX-E 5, Ebner has years of experience in e-technology. With the KTM SX-E 5 it was really important to provide the highest safety standard, something that Ebner was passionate about achieving, as well as a bike with controllable power that fits the READY TO RACE mantra.

“The lowest mode is really smooth, with a low-end speed, and it’s even possible for parents to walk or run behind the bike. This is a big advantage over the combustion engine – the controllability of the throttle is really good compared with a combustion bike. One of the reasons that it’s easy to ride is due to a really fast response of the torque at the rear wheel. We see from national level junior rider that the lap times are similar to a 50cc combustion engine, or in some conditions they are even faster. You have this really direct and good controllable power, along with all of the advantages of an e-bike,” said Ebner. 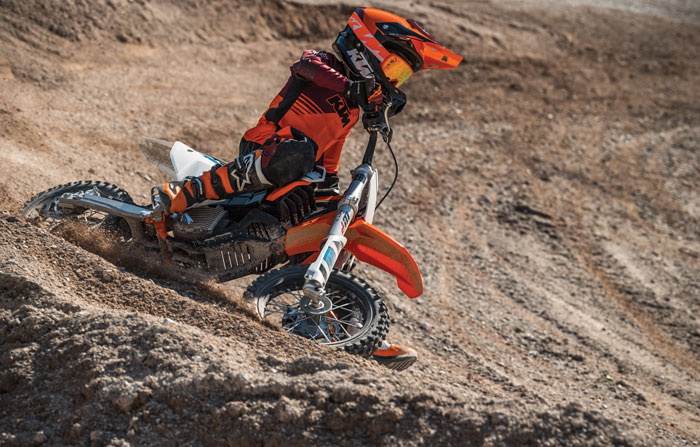 “We tried to find the best balance in terms of safety and in terms of performance. Performance means good energy density to offer a lot of range in a small volume yet with a low weight. This is always a big issue because battery technology in general is really on a limit – we are using lithium-ion battery technology, and we have seen a steady development for improvements in this area over the last few years. I believe with the KTM SX-E 5 we really found a good solution,” continued the electrics expert.

Hours and hours of testing, abuse testing, riding testing and so on have been done with these bikes, which have a lot of premium components including the frame, subframe, WP XACT 35 suspension and WP XACT shock absorber – it’s a special new technological revolution that can be enjoyed by such a wide range of riders. 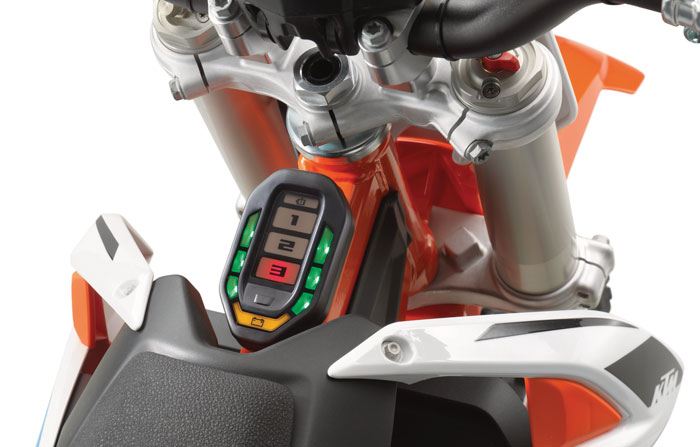 With that in mind, it also means KTM continues its commitment to encouraging new riders to the sport, whilst keeping the READY TO RACE DNA right at the heart of every model produced. Perhaps the KTM SX-E 5 will encourage new families into the wonderful world of biking, whilst creating something special and different for already orange bleeders.

44 Responses to THE NEXT CHAPTER IN KTM´S E-MOBILITY STORY: INTRODUCING THE KTM SX-E 5